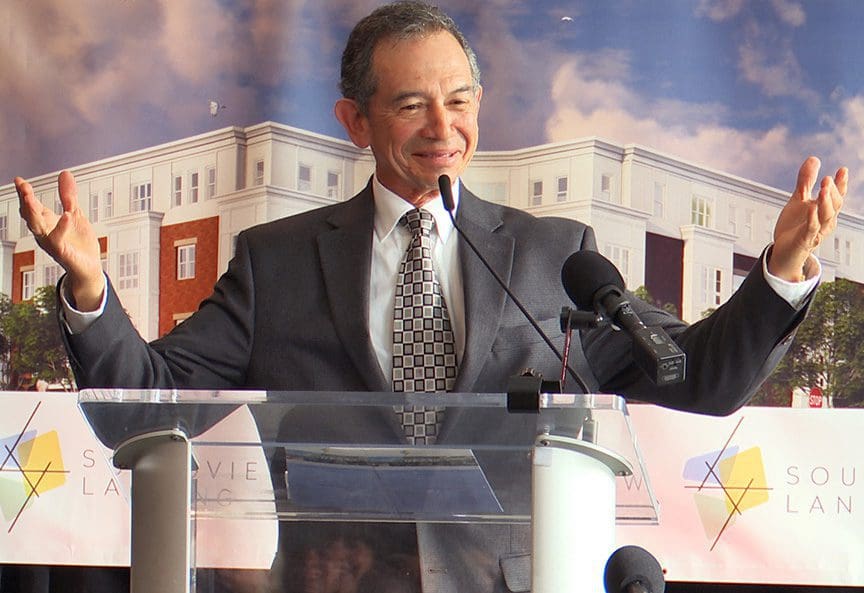 Ramirez was a Norwalk Police Officer for 32 years and served on the Norwalk Housing Authority since 1992. He was NHA chairman.

“It is with great sadness that the Norwalk Police Department announces the passing of Officer Cesar Ramirez after a courageous battle with cancer. Please keep his family in your thoughts and prayers.”

“Cesar Ramirez was a really special person and Norwalk Police Officer. This is a great loss for our Norwalk Police family. It was my honor to know him well,” Mayor Harry Rilling said Tuesday afternoon in a statement.

“With Officer Ramirez’s passing, our multi-cultural community has been left without his guidance, but with a perfect example of all that is good, decent, and necessary in a human being,” Lucia Rilling said in a statement. 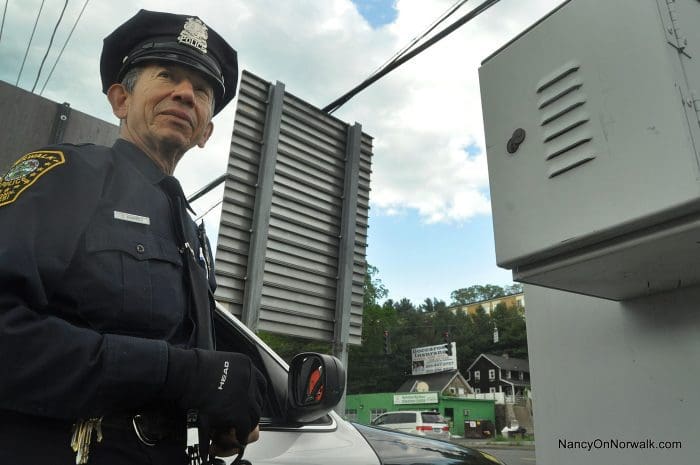 Norwalk Police Officer Cesar Ramirez handles traffic at the intersection of Main Avenue and the Merritt Parkway in 2016. (File photo)

Ramirez, 71, joined the NPD in 1987, after seven years with the New York City Police Department.  In August 2016 he received a Community Policing Award from the U.S. Attorney’s Office, and was named Officer of the Month for organizing a vigil honoring five murdered Dallas Police officers.

“We are all heartbroken over his loss. Our thoughts and prayers are with his family during this difficult time.   Cesar serves as an example for all of us and a pillar in the community.  He epitomized a public servant and a community police officer,” Police Chief Thomas Kulhawik said in an email.

Ramirez led the Housing Authority as it developed plans to rebuild Washington Village, then the oldest public housing project in Connecticut and possibly the nation. The Authority secured a $30 million United States Department of Housing and Urban Development (HUD) Choice Neighborhoods Initiative grant in support of the effort and Phase I of the Washington Village replacement, Soundview Landing, opened in mid-2018.

He was also a long-standing member of the Republican Town Committee.

“Cesar will be deeply missed in the community,” Republican State Central Committee member Kelly Straniti, a Norwalk Police Commissioner, said. “We’ve been grateful to have him as a member of the RTC for so many years and as such a fixture in Norwalk. His smile and warmth was something that made everyone feel good. We’re incredibly saddened by the loss of such a good man who gave so much, and gave so happily and freely because he cared from the bottom of his heart.”

In December, after being diagnosed with cancer, Ramirez said that in his long career as a police officer he always tried to find the good in people he encountered, even in situations where he was enforcing the law.  He said he believed every person deserved to be treated with respect, regardless of their circumstances in life.

He was honored by Norwalk Police on Dec. 13, in a warm, poignant send-off marked by calls of “We love you.”

“I still believe God does things for a reason,” said Ramirez.

Rilling gave him a key to the city, calling it a special honor that “very, very few people” have received. “What grace, what courage, and the way you have lived your life,” Rilling said. “You’re an inspiration to us all.”

“Just care for each other,” Ramirez said. “Respect each other as you like to be respected. Do anything without expecting anything in return.”

“My thoughts go out to Cesar’s wife Ana, their children and their grandchildren,” State Senate Majority Leader Bob Duff (D-25) said in a statement. “Cesar was loved by all and one of the finest of the finest in the Norwalk Police Department. I am glad we all were able to have a ceremony with Cesar, his family, and the community last month to honor his over three decades of service. We will miss you, Cesar.”

“I admired Cesar’s respect, dignity, and faith, both for himself and toward others. His kind and gentle ways were meaningful and, most of all, an important trait he possessed,” Lucia Rilling said.

“He cared deeply about the community he served. He was a dedicated public servant in every sense of the word. His passing is a huge loss for our city which I know he loved dearly. It is a sad day in Norwalk, but I know his legacy will live on through the programs he started and the difference he made in the lives of residents.

“All of Norwalk mourns with his family during these sad times.”

This story was updated multiple times after it was initially posted, to add comments from community leaders.

Many of you have know him as Officer Ramirez. I was able to share a life where I meant the men behind the badge. Officer Cesar Ramirez went above and beyond for his community. There were times when He would take me aside and Talk To Me As A Father! As I share today with Abraham Geovanni Ramirezand this journey of life. I know he would look at us today. Just say I am Proud Of The Man You Guys Are Today! I can gladly say here today. I THANK THE GOD LORD I HAD OFFICER CESAR RAMIREZ IN MY LIFE, I AM A BETTER MAN BECAUSE OF HIM.

Rest in peace, my friend. You were an extraordinary man and an inspiration to all in the community you served well.

I had the pleasure of knowing you for 20 years. Every time we met you had a broad smile on your face and would ask about my son. You were a genuine soul, a gentleman and a true embodiment of the Golden Rule. God bless you and your family. You will be sorely missed, because you left the memory of your smile with us all.

So sad to hear of Cesar’s passing. My deep condolences to his family and his Police and Housing Authority colleagues. A real loss for Norwalk! We did not always agree on housing policy or politics, but had a mutual respect and I loved his broad smile, hug and willingness to listen.
Rest in Peace Officer Ramirez.

Always give the beautiful ones their “flowers” before they transition.
RIP Officer Ramirez. You were a class act!

Officer Ramirez was a very fine man and a wonderful police officer. He will be missed.

Words can not express the sorrows I feel knowing I will never see your smiling face again when I pull into work, but I am inspired by the life you lived and will put into action the advice you’ve given me to help make our community a better place.