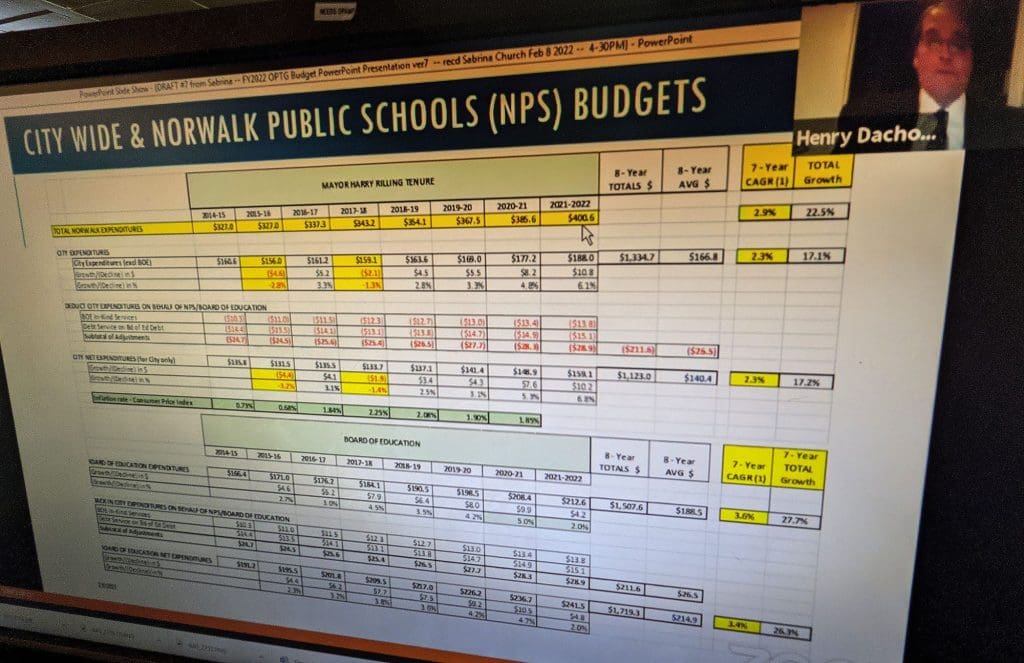 Norwalk Chief Financial Officer Henry Dachowitz presents his recommended 2021-22 operating budget Monday to the Board of Estimate and Taxation.

NORWALK, Conn. — Norwalk’s finance director has recommended a $400 million operating budget for the coming fiscal year, an increase of $15 million from 2020-21. That factors in a proposed $8 million drawdown of the City’s fund balance, or “rainy day fund,” and estimates a 3.67% mill rate increase for the Fourth Taxing District.

Chief Financial Officer Henry Dachowitz’ recommendation would increase the Board of Education’s budget by $4.2 million. This falls short of the Board’s requested increase of $11.7 million.

The BoE requested increase is described by Norwalk Superintendent of Schools Alexandra Estrella as “pretty flat,” given that most of the increase is due to items outside the Board’s control.

“We are deeply concerned by the City’s choice to recommend only a 2.0% increase for next year’s school operating budget,” the Board of Education and Norwalk Public Schools said in a statement.

Dachowitz presented his budget to the Board of Estimate and Taxation, drawing a discussion about the use of the fund balance.

“Why did we do that? Because we did this budget right after COVID hit,” Dachowitz said. “And we said we have so much uncertainty we don’t know. But at the same time, we knew that our citizens and taxpayers were under financial duress. This is when we had the illness raging. And we had lockdowns. So we said, let’s use $8 million of our surplus to diminish the amount of increase in the mill rate.”

Last year, the budget factored in a $6 million drawdown from the fund balance, but “we needed less than $1 million,” Dachowitz said. So, $4 million was “rolled over” to the Board of Education in a non-expiring account, and “therefore if they don’t spend it all this year, it could be used in next year’s budget. We also took about $1 million and gave it to certain departments on a city site.”

Norwalk has planned to draw down its rainy day fund for the past four years but “we have a history of not drawing down the entire amount that we budgeted,” Dachowitz said. In 19-20, the planned $6 million drop turned instead to a $6 million increase due to “terrific management.”

If, worst case scenario, Norwalk did have to use the planned $8 million in 21-22 it would still have 10.6% of the operating budget in reserve and “There are other cities who are doing worse,” Dachowitz said.

“Also let me add, our pension and OPEB (other post employment benefits) contributions were at about 75% funded,” he said. “There are many places including the state of Connecticut that is only 50% funded on pension. And they are I think half the cities in Connecticut do not even have an OPEB trust.”

So comparing liabilities to reserve, “our percentage funded is pretty high,” he said. “Very pleased with that, especially relative to other cities.” 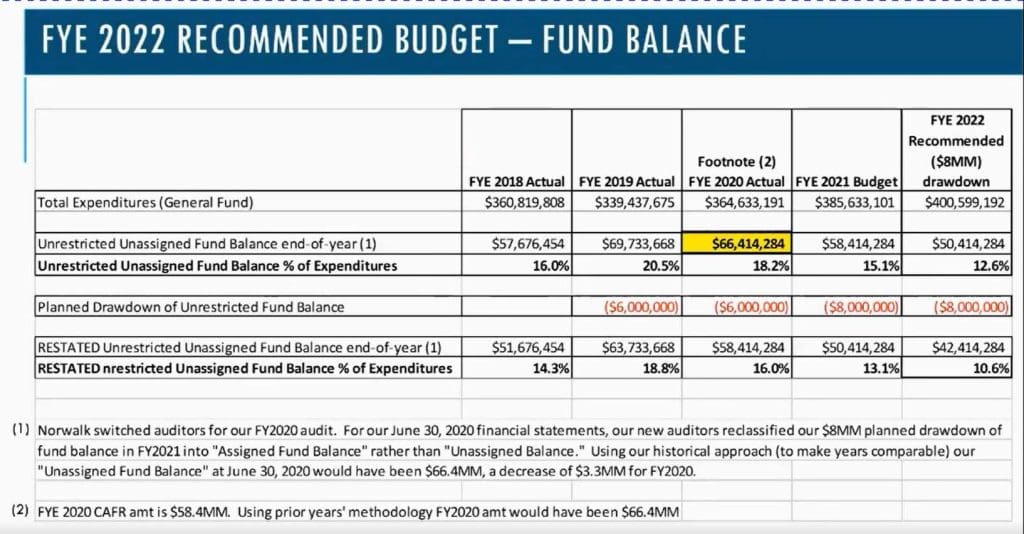 Dachowitz characterized the overall budget growth as 2.9% per year over Mayor Harry Rilling’s seven years in office. That “compound annual growth rate” is “just a mathematical way of trying to explain the 22 and a half percent growth,” he said.

He also pointed out that in two of those years, the City’s expenditures decreased.

“Our seven-year total growth was 17 percent,” he said. “And our annual rate of growth was 2.3 percent. However, the numbers here are a bit misleading because we in the City have expenditures in our budget that are really for the benefit of the Board of Education.”

He spoke of the efficiency audit agreed to by the BoE at the end of last year’s budget cycle and explained that a request for proposals had generated 11 or 12 responses in September “and the quality of the firm’s and the quality of the written responses are excellent.” In December, a Committee was “very close to making a final decision” on which four firms would be invited to make a presentation via Zoom.

“It was then determined that because Dr. Estrella was new to the schools, that we put the RFP on hold,” Dachowitz said. “And we are working diligently now to refine the details. And I am hopeful that we will be able to select one of the firms in the next several weeks by the end of February.” 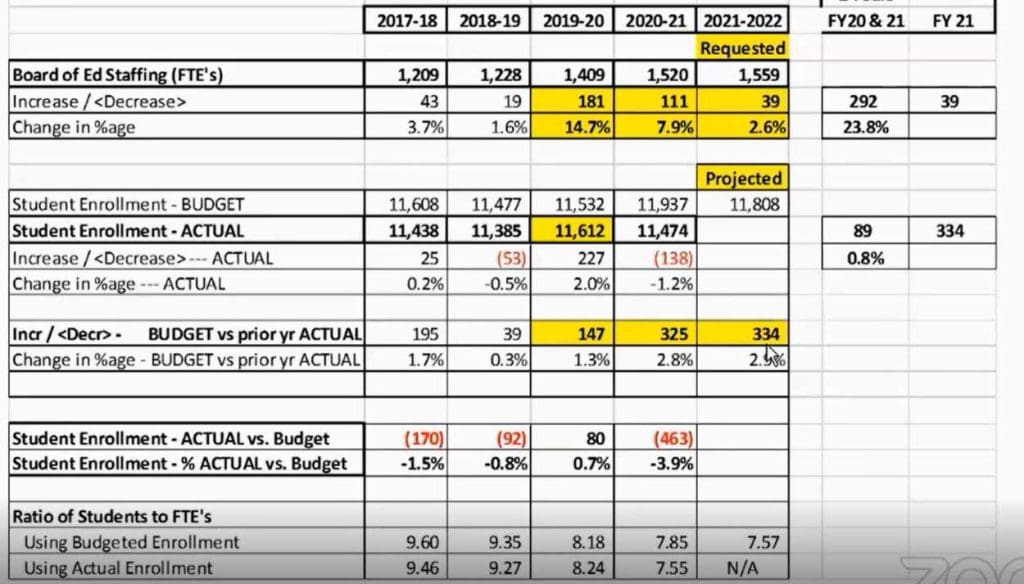 As a “good example” of why the efficiency audit is necessary, Dachowitz said Norwalk Public Schools has added 292 fulltime employees in two years, an increase of 23.8% to its workforce. The City, by comparison, issued an early retirement incentive program and “ended up with a net headcount decline this year.”

“What’s driving this? What are the reasons for the increased staffing?” he asked. “…This is where an independent expert knowledgeable about school operations throughout New England or even nationally, could look into these numbers and look into the operations and get a better handle on what is reasonable and what is inefficient than could be saved.”

The Board has openly spoken of adding positions in recent budget cycles. Last year, Adamowski moved at least 10 new positions, most of them involving support for English Language Learners, to the grant funding column, so that they didn’t come from Norwalk taxpayer dollars.

There’s also been talk of adding paraeducators for the Special Education department, widely praised for improving in recent years.

The statement from NPS and the BoE said:

“The Board of Education carefully considered many factors before recommending a modest 5.6% increase for next year, including the sharp rise expected in health insurance costs for teachers and staff under the State of Connecticut’s 2.0 health plan.”

“The BOE’s budget request also included a 2.7% increase to meet priority staffing needs and contractual obligations to teachers, principals, paraeducators, nurses and custodians, who have been giving their all on behalf of our students in these challenging times. Funding at a level below the amount required to meet even our basic contractual obligations will have significant consequences.”

Rilling and Dachowitz both referenced the pain caused by COVID-19; Dachowitz said the pandemic is affecting three budget years, 2019-20, 20-21 and probably 21-22.

“I hope next year COVID is addressed with the vaccinations, businesses can reopen, and some of that financial pressure will be alleviated,” Dachowitz said. “But we budget for the worst and hope for the best and manage for the best. So that’s what we’re doing with our fund balances.”

He continued,“I think it’s appropriate that as a responsible board with the city funds. We need to do everything we can to help the citizens of this community who are experiencing very, very difficult times as difficult as it is for us. The easy thing to do is to raise taxes. The tough thing to do, and the right thing to do is to keep taxes as low as we possibly can any tax increase as low as we possibly can. And, again, I think that’s what we should be trying to do.” 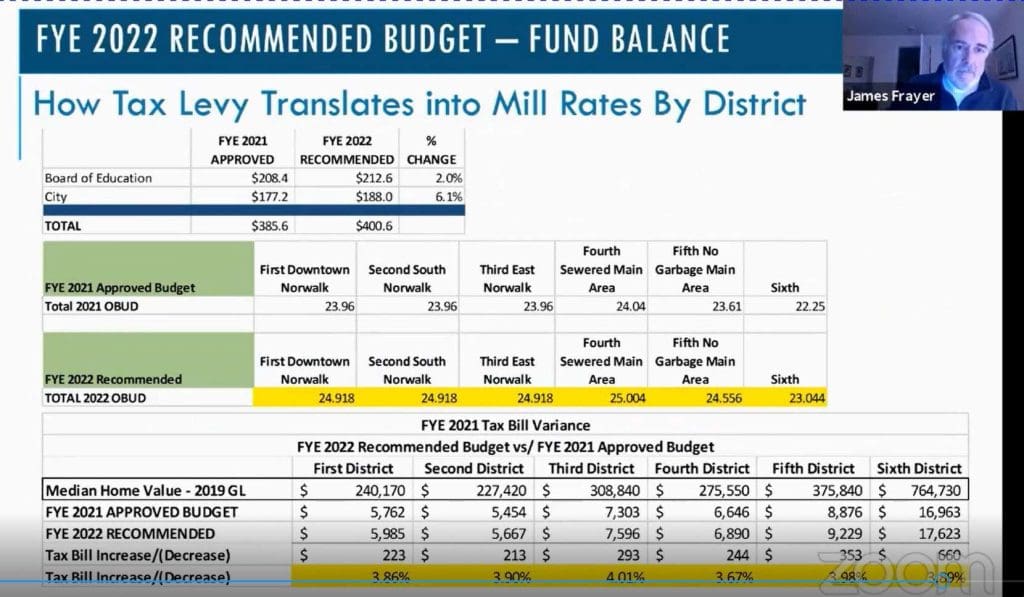 Board of Estimate and Taxation member James Frayer questions the proposed use of Norwalk’s fund balance, during Monday’s BET meeting. 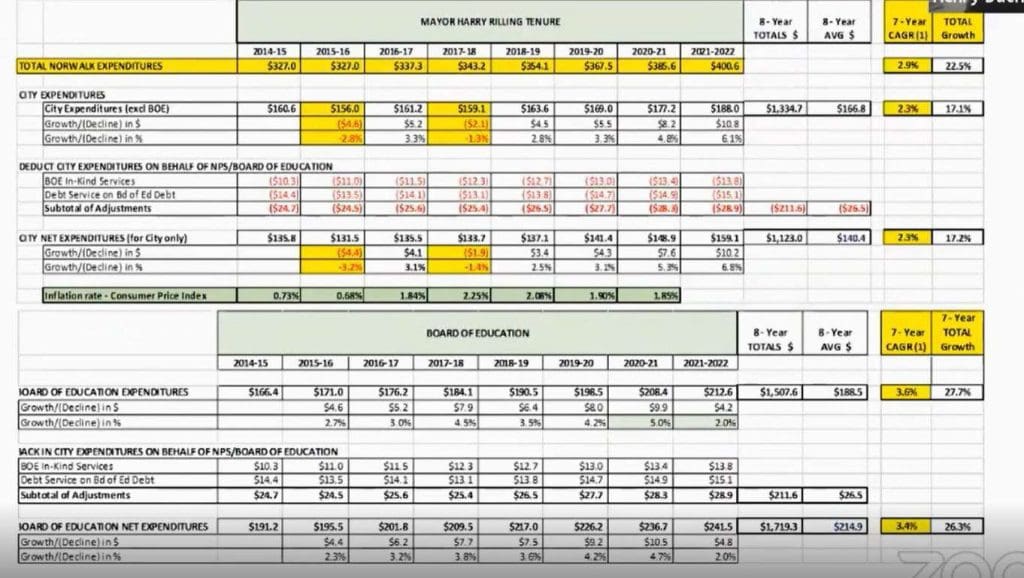 A 3.67% mill rate increase is significant even w/out fully funding the BOE. I’m glad that the City is at least trying to control some costs.

If you think an education is expensive, wait till you see the price of stupidity.

Why the combative tone and clearly political spin? Why does City Hall need any funding since it. Is essentially closed and proven itself to be non-essential for the most part?

Who’s job is it to change the electronic billboard that hasn’t been updated in 2 months? Was that an early retirement too? How many new hires will it take to change that?

Some notes for today:
1) Again, thank you Henry D. for maintaining your integrity. Don’t back down — There are many counting on you to be our voice.
2) Note to our Hartford Legislators – Norwalkers need to know the same guy (Kevin Lembo – State Comptroller) who sold Norwalk on the State Health Insurance plan for our teachers is costing us $6-$7 million extra this year. Why is that? Because Kevin Lembo has no freaking idea what he’s doing !! When Welcome Center supporters complain about not succeeding, maybe they should give Duff & Co a call. I bring this up because Lembo is the same guy currently pushing for the Public Option for Everyone’s Health Insurance. THAT WOULD NOT BE A GOOD IDEA. IF our legislators vote for that option they are being naive and ignorant. Our debacle with Teacher’s Insurance is a Red Flag. All you need to know about Kevin Lembo is that he’s also pushing for State to offer PET HEALTH INSURANCE for state employees during pandemic. What??
3) Maybe, just maybe if Norwalk’s ELL programs were supported by State or Feds life would be better. BUT they are not, and that’s a travesty.
While people like Jim Himes endorse convicted felons for office in Bridgeport he’s forgetting to call Harry back on ELL funding. That’s ok because Jim does speak Spanish, and seems to have all the answers. Except of course how to support our ELL programs.

I for one would like to see a breakout of the new BOE employees of 292 in 2 years. Perhaps NON can get it through FOI are they in central office where are they?

And why does the enrollment data presentation only start in FY18? What about the rest of Sanctuary Harry’s tenure? We’ve had some cynical budget cycles, but this promises to be the worst of the worst. I don’t think I’ve ever seen such an Us vs Them tone in any budget presentation.

As tax payers, we pay our teachers very well in Norwalk. We can certainly hire the best.

Where is the Fourth Taxing District??

An increase of 292 NPS full time staff members in two years! Going from 9.3 students per full time employee in 2018-2019 to 7.55 students per full time employee in 2020-2021 and an attempt to hide 10 of them from the taxpayers by hiding them in a grant funding classification! Are grants guaranteed to be renewed annually in perpetuity or are we looking at a situation like the 80% state funding for the Duff Mahal on the corner of County Street and Strawberry Hill Avenue which is evidently not guaranteed. Considering the current state of the economy, since when is a 3.67 mill rate increase insignificant? How is it that the NPS and the BOE can be so arrogant during a time when so many small businesses have either closed or have had to lay off most if not all of their employees in an effort to survive. Thank you, Mr. Dachowitz, for your transparency and efforts on behalf of the taxpayers of Norwalk. Hopefully, the Common Council will not just cave in to the teachers union for the sake of votes which has been their standard operating procedure in the past.

The Fourth Taxing District is the portion of the City with city sewers and garbage collection.

Why is the enrollment only from 2018? Why not go back for Harry’s entire term? All of the apartments and illegal apartments in this city have led to growth.

@Nora. One can only conclude the purpose is to trick people into blaming children for the excess budget and not the poor planning on the Mayor’s part. Just when you think this guy can’t go lower.

Mike Lyons Thank You for getting back to me. So what this is basically saying is that anyone with city sewers and garbage collection is getting yet another tax increase. I wonder how many realize this ?

I agree with Dachowitz. Don’t burden the taxpayers during this pandemic. Thank you Dachowitz.