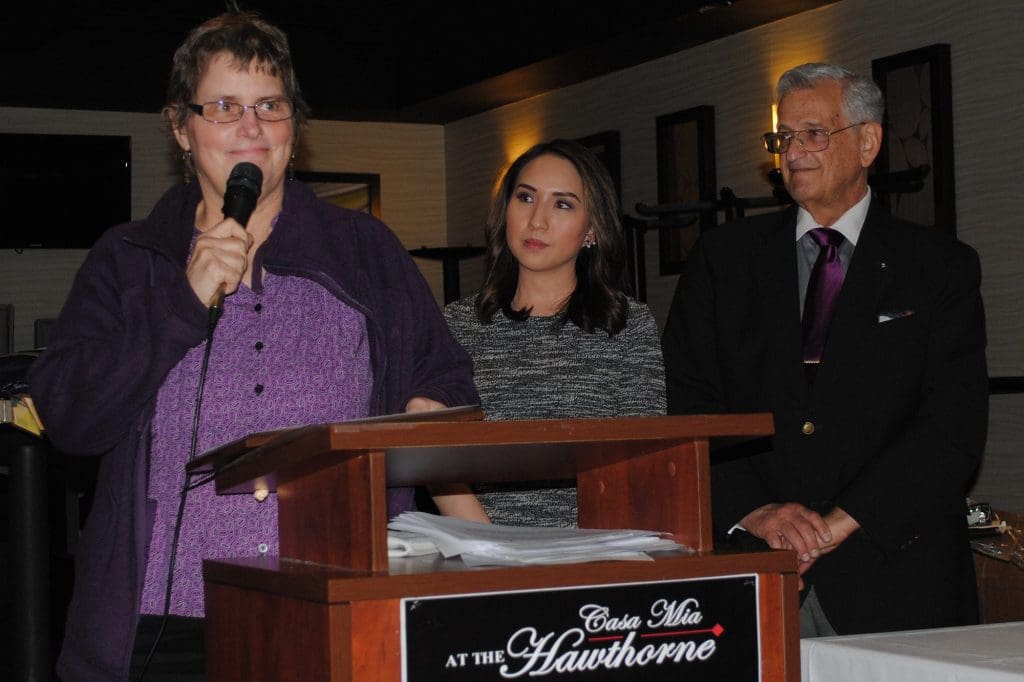 The First Amendment Award is given to a single story, column or series of stories that increase the understanding among the public of the role the press plays in a free society. It it was the first time a hyperlocal site won the First Amendment award. SPJ calls it one of their “three big awards.”

Chapman’s story reported details of unsuccessful State Senate Candidate Marc D’Amelio’s 2014 DUI, which had been expunged.  The reporter received a copy of the arrest report by mail in an envelope with no return address.  When she contacted D’Amelio for comment, his lawyer threatened a lawsuit if she wrote about the arrest.  She verified that she was on solid legal ground and published a story.  D’Amelio lost the election and sued Chapman for negligent/intentional infliction of emotional distress and false light invasion of privacy.

Chapman’s attorneys responded with a special motion to dismiss under Connecticut’s new anti-SLAPP law, designed to provide for the quick dismissal of suits arising from the exercise of rights covered by the First Amendment.  Contesting the motion and losing could have obligated D’Amelio to pay court costs; his attorney withdrew the lawsuit on May 6, before a judge could rule on the motion, claiming that he could not proceed without an expert witness who had developed a conflict.

“I’m astounded.  I’m going to put (the award) next to my husband’s urn,” Chapman said to the more than 150 Connecticut journalists in attendance.  Chapman founded NancyOnNorwalk with her husband Mark in 2012.  He died in 2016.

NancyOnNorwalk is a 501(c)3 nonprofit and a member of the Institute for Nonprofit News.

Nice work, you both!

Congratulations to Nancy and Harold for their achievements. Being first to win speaks volumes. It’s always hard work, and dedication that shines a light and raises awareness, and Nancy (and Mark!) has shined a light on hyperlocal journalism for all!

Congrats to both Nancy and Harold for their tremendous achievements. After helping you win a prestigious 1st Amendment award, Damelio may finally be ready “to fade into the sunset”. I hope this story gets NATIONWIDE PRESS!!! Enemies of the 1st Amendment should be known far and wide.

Congratulations, Nancy and Harold! And a bug thanks to the board for the thankless job of supporting Nancy on Norwalk. Norwalk is better off when we are better informed.

Winning out of a field of 843 entries — wow! How many of us even stopped to think that there might be 843 journalists working throughout Connecticut to keep communities informed?

Awesome! Thanks Nancy and Harold for always doing the right thing!

Great work recognized! Congratulations Nancy and Harold for your tenacity and patience!

Well deserved, Nancy & Harold!! Thank you for keeping us all well informed with warmth & not any nastiness. Please do persevere. Lots of love, Missy & Jeff Conrad

Congratulations to Nancy and the whole NoN support team for making this invaluable news source such a wonderful resource. Sorry, instead of “wonderful” I should have said “AWARD WINNING”!!!

Congratulations to both Nancy and Harold! Well done!