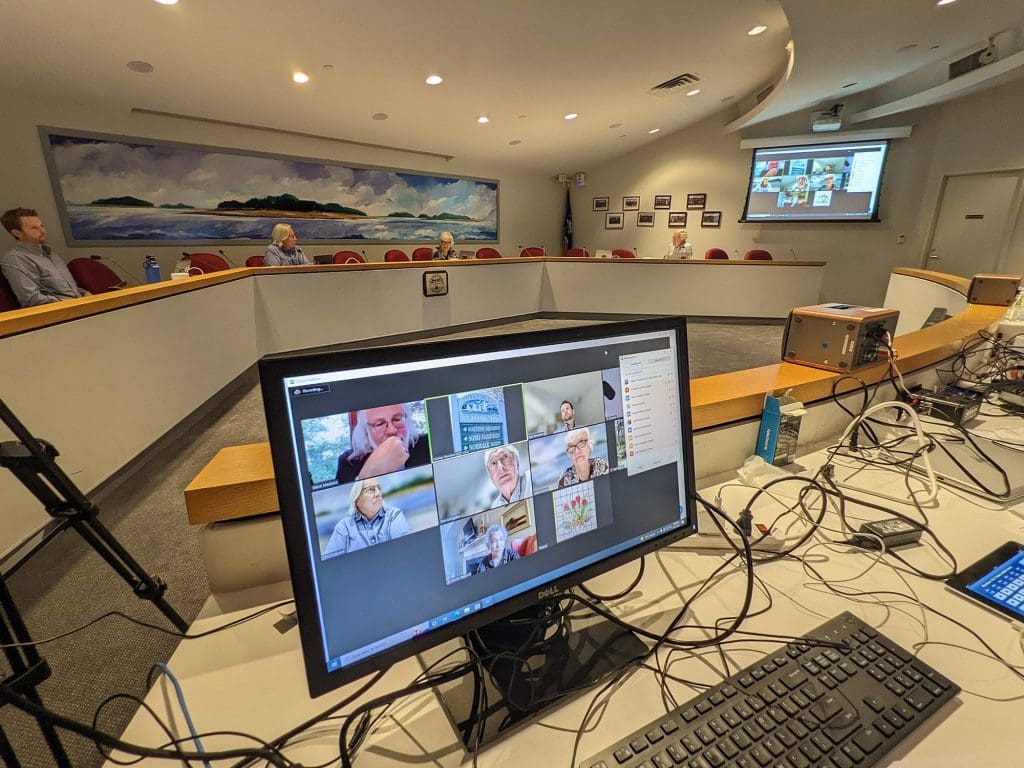 NORWALK, Conn. — A more diverse set of candidates could run for Common Council and the Board of Education if the pay for the roles was increased, Democratic Norwalk Common Council members say, asking that this be included in the Charter revision that’s underway. Some also call for a larger Police Commission.

But those lofty ambitions will have to wait at least a year, said an attorney hired to guide the recently established Charter Revision Commission. The first task, he said, is to transform Norwalk’s antiquated guide for City government into a reader-friendly document in time for the next election – and it’s going to be a more arduous and challenging process than you might think.

“I’ve never tackled a complete rewrite, as we are trying to do here. This is a big, big deal,” Attorney Steven Mednick said Thursday. “… This is a different animal than almost anything I’ve worked on.”

Mednick has been serving public and private institutional clients in private practice for 28 years, his website states. He “has re-written the governance structures for many of the largest municipalities in the State of Connecticut,” including Hartford, West Haven, Waterbury and New Britain.

Although Rilling administration officials previously acknowledged the need to revise the Charter, a 2016 initiative involving individual changes rather than a comprehensive cleanup failed. Voters rejected three of four possible revisions: elimination of elected offices that serve no purpose, extension of the Mayor and Town Clerk’s terms from two years to four years, and increase of Council members’ salaries. The only approved change was to make Council titles gender neutral.

Norwalk’s singularly backward Charter hasn’t had a comprehensive revision since it was written in 1913. Evergreen Solutions, in presenting its efficiency study in March, called the need “desperate” and in September, the Common Council appointed seven Norwalkers to a Charter Revision Commission.

In one of four Commission meetings held thus far, Attorney Angela Wassuna said that the City’s old Charter is tough for a lawyer to comprehend, nevermind the average citizen.

Mednick and Evergreen team member Betty Ressel urge simplicity. The aged 208-page Charter would best be made much shorter because “there’s just too much minutiae in there,” Ressel advised the Commission.

“We want to write a plain language Charter,” Mednick said. “…Ultimately, this is the Citizens Guide to the structure of the government. And if the citizen can’t understand how a bill becomes a law, how you create an ordinance, how the budget is adopted, how the capital budget is adopted, why the departments exist, what are they here for, all those things, then it’s not a very useful governing document.”

Excerpt from the Charter. In 2016, voters refused to eliminate Selectmen and similar elected positions.

Ressel told the Commission to focus on “getting a clean, workable Charter, and not the restructuring of government in the city of Norwalk today.” She said, “I want you to create something that the voters are going to say ‘that’s Norwalk, and no one has got a hidden agenda inside this document.’ In essence, the last time around, the voters threw the baby out with the bathwater, and I really don’t want you to fall into that kind of trap again.”

Mednick concurs with Council President Tom Livingston (D-District E) and others that the budget process should be reviewed as part of what Livingston called the elementary “cleanup and modernizations” necessary in this first step.

But some want more, issuing suggestions that echo 2016.

The $46 a month stipend paid to Council member is “almost laughable” as “many, many hours” are put in, Council Majority Leader Barbara Smyth (D-At Large) said, urging “reasonable compensation” for Common Council and BoE members to allow people with young children to run for office.

Council member Jenn McMurrer (D-District C) agreed; Council member Nicol Ayers (D-District A) called it a social justice issue as $46 “doesn’t even cover 30 minutes of childcare, doesn’t cover gas, doesn’t cover our electric bills or anything of that nature … part of government is removing barriers. We are our best selves when everybody comes to the table equally, this current document does not allow us to be equal.”

Ayers also said the Council is “slowed down by the fact of we’re not able to have a staff person to facilitate some of the day-to-day basic things that we need done.”

The Charter is an impediment “to us becoming the city, the modern city that we need and want to be,” Council member Nora Niedzielski-Eichner (D-At Large) said, calling a rebalancing of the City’s executive and legislative finance functions “crucial.”

“We have been very blessed in the last eight years to have an extremely competent administrator, who has literally four plus decades of public service under his belt,” with the “enormous amount of authority over the city’s finances,” Niedzielski-Eichner said. “That is not necessarily the way it will play out in the future.” 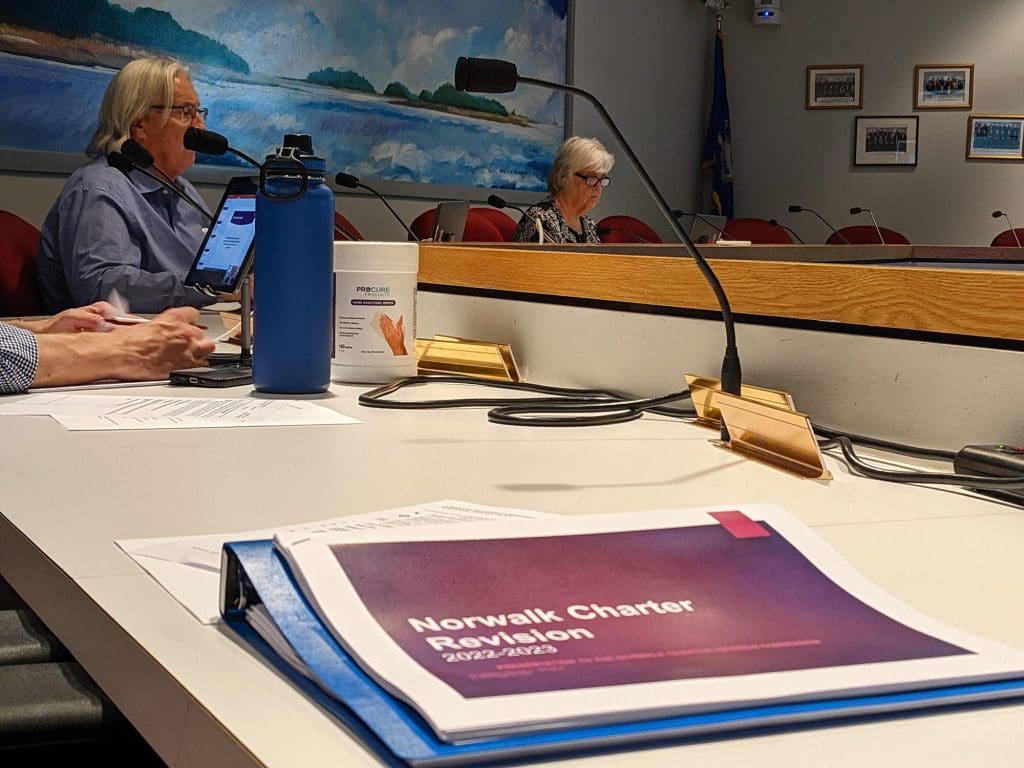 The problem is that the Commission must deliver a complete user-friendly revision to voters in less than a year, meaning a draft ready by early June to allow time for the process to play out and get it onto the ballot. “If we start rewriting it, we can’t have a partial new Charter and a remaining old Charter,” Mednick said last week, outlining an “aggressive timeline” in which February should mark a Commission vote on that topic.

Ressel agreed that the Commission should be able to meet the deadline. Mednick said he expects to spend two months working up “a whole revision” on the Charter and “strip it down,” with an emphasis on showing his deletions to the Commission.

He won’t change office terms or the Council’s composition, or recommend the Board of Estimate and Taxation be taken out of the Charter, he said. “I’ll look at extraneous language. Instead of having appointment provisions for every Board and Commission that remains in the Charter, there’ll be a standard language on how appointments are made.”

Specifics need to be defined in ordinances, Ressel and Mednick said. The Charter will authorize the creation of departments with descriptions of services instead of specifying a name.

The Charter describes taxing districts before it describes the Common Council. Mednick suggests they be moved to the back of the document “because we’re probably not going to touch them.”

Commission Chairwoman Patsy Brescia warned that the districts are protective of their power. “We have to respect where we are with it and understand the emotional aspect of it in the community.” But the districts should be explained because if you’re new to Norwalk, “you don’t understand that they’re not simply geographic districts but they’re service districts… That leads to a lot of confusion.”

Mednick suggested moving the ethics code to the beginning of the Charter, “So the members of the public look at it, they see these are the standards that apply to our officials.”

Even though a revision is expected to keep it simple, the Charter will have new items due to the march of time. One example is hybrid meetings. “There are things that have occurred in the world that we live in that will have to be addressed here,” Mednick said.

He promised to send Charters he’s recently worked on to the Commissioners. While they will see similarities, “It’s a wonderful way to prove that there’s no cookie cutter.”

“This may be an opportunity to really create a model Charter,” he said, “because so much of what you have is archaic, not workable… I don’t know what the Charter is going to look like. But I guarantee it’s going to look very different than this Charter.”

There are certainly no hidden agendas present here; the council’s hungry and immediate view that this represents an opportunity to mandate a pay raise for themselves is on full display.

Common council is a volunteer position. In fact, members of the common council love to remind us of exactly that fact. It is NOT a full time job. Read that again, common council members. It is NOT a full time job. You’re NOT uniquely eligible for a grant of Norwalk tax payers money because you’re a common council member. The shameless greed and entitlement of Norwalk’s political class is absolutely egregious in this ask. “Part of government is removing barriers?” Barriers to what, exactly? Barriers to politicians being able to enrich themselves at taxpayer expense? Wrong. In fact, I identify with the trials of these people absolutely. I know exactly what it’s like to need money to pay for gas and electricity and child care. So much so that I insist on keeping it for myself to do precisely so.

Not only am I disinterested in making it more frictionless for our local politicians to be such, I actually advocate for it to be made as difficult and discouraging as possible to be a politician. Particularly as long as the candidate pool is as lukewarm as it gives every indication of remaining.

I agree that our council members, like our schools, are lackluster at best. And as in the case of our schools, this is a complex problem that should be addressed with the honest apprehension that it can’t be solved simply by throwing money at it.

I found an irony which seems apropos in a recent reading of Plutarch. In Plutarch, there is a rich roster of political leadership that had that leadership and role of representation thrust upon them. Not only did they not offer THEMSELVES up, in many instances they virtually had to be forced to take on those roles by the polis. This idea of the people demanding the guidance of an individual with a collective, “You’re the person for us” is markedly different from the situation which we now have where people who nobody has asked for stand up and declare, “I’m the person for YOU.” That warrants some thought. Especially since those same people are now following up that declaration with another, equally loud cry of, “I need a pay raise!!”

James Cahn’s assertions are condescending, needlessly esoteric, and part of the reason why we get bad and corrupt government.

If an elected office does not pay a salary that people can make a living off of, then only the rich and corrupt can afford to run for office.

That’s it. If someone can’t clear that basic hurdle when they’re trying to explain to you why all government is evil, then you don’t need to listen to them, because they don’t live in reality. Here in reality, people who run for office need to make a living. Period.

Plutarch lived over 2000 years ago. Plutarch doesn’t have any secret “wisdom of the ages”. He’s just a commentator who saw ONE cycle of dysfunction. That’s a sample size of ONE. An anecdote. Not wisdom. If James can’t understand that in his laudable historical readings, he’s a baby with a gun, not someone we should be listening to here.

How many IT departments does it take to gather wires together and conduct a meeting without 20 minute interruptions?

I like Barbara personally, but if she wants to get paid, she should go back to teaching. As a taxpayer, I find it laughable that this rubber-stamp common council thinks it’s earned a raise.