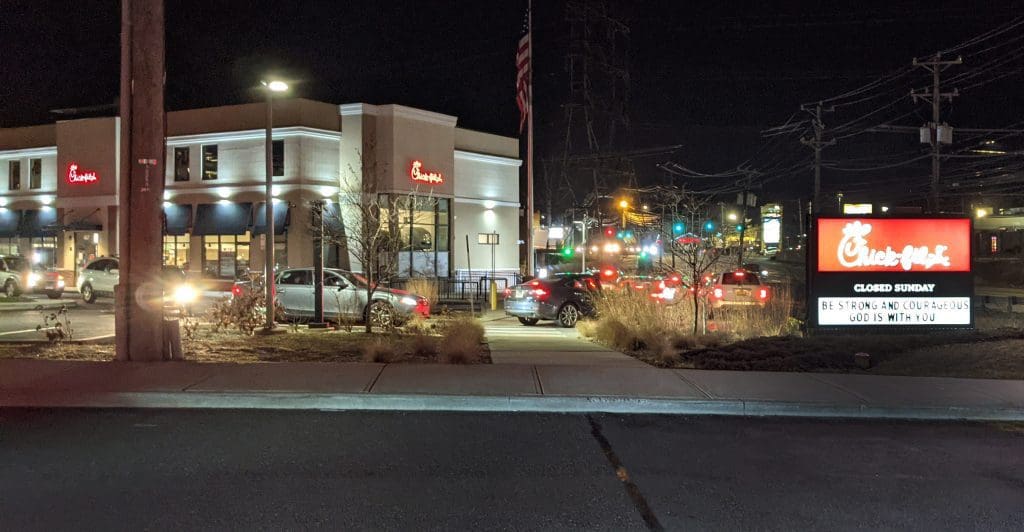 The line at Chick-fil-A on a Wednesday in early March.

NORWALK, Conn. — Chick-fil-A owners have produced a plan to alleviate the traffic jams their Connecticut Avenue restaurant is causing.

“With some geometric improvements at the entrance to the drive-through and with some curb improvements near the rear of the site, you’re allowed to have double drive-through lane, you know, a lot earlier in on site, that just provides a lot more space for queuing,” Ethan Schukoske, a traffic engineer, told the Zoning Commission on Thursday.

In addition, Chick-fil-A will create a mobile order pickup area and a second spot for drivers who are in the drive-through line to pick up their food, a practice in many fast-food restaurants now, Schukoske said. Employees will dash over with the customers’ bag of food and then drivers merge back into one line on their way off the property.

This is a temporary plan – Chick-fil-A will produce a permanent solution as soon as possible, Attorney Liz Suchy said.

It’s important because the headaches caused by Chick-fil-A’s success at the site adjacent to Stop n Shop are so bad that one Saturday, Norwalk Police closed Rampart Road, according to Zoning Commission Chairman Lou Schulman. Valvoline, the oil change business across from Chick-fil-A, was shut down.

Chick-fil-a first came to Zoning in February to be queried about the traffic problems, which have resulted in people sitting in the Connecticut Avenue travel lane, in line to get chicken. Suchy said COVID-19 was the reason for the failure of the approved traffic plan for the site, as people just wanted to get out of their homes and could not get inside the Chick-fil-A for their coveted fast food.

The Norwalk Transportation, Mobility and Parking Department hadn’t yet reviewed Schukoske’s interim plan, which is similar to one TMP produced. The mobile pickup is the new component.

“Then in addition to that, like I mentioned, we’re hoping to optimize some of the ordering process so that you know, they can push cars through quicker. And so we both those things combined, you know, we reduce the likelihood of queuing on the Rampart Road,” he said.

“I know that representatives of Chick-fil-A have been discussing what are the permanent solution they can devise an internal basis, they also have to deal with the landlord to consent and modify leases, but they are working on a permanent solution,” Suchy said. “And I would suspect that would be probably a couple of weeks, a couple of months for that design to be created and vetted and obtain the landlord’s consent.”

“My understanding that they have shared the concept with the landlord, we’re just waiting for the landlord to respond,” she said.

As for the temporary plan, “I think we like to see you give it a try,” Schulman said. “I mean, if you fall on your face, you may have to simply go back to what you’re currently doing on a temporary basis, until we come up with something that does work.”

Other Commissioners agreed. Commissioner Joshua Goldstein suggested a trial period because, “We’re going to need some sort of data collection or some kind of evidence, you know, as to whether it’s working.”

Planning and Zoning Director Steven Kleppin said it would probably take three or four days to get feedback from TMP Principal Engineer Mike Yeosock. Then if there’s a green light, Chick-Fil-A will need permission from the Department of Public Works to do the curb cuts that are necessary, Suchy said.

Suchy said she hadn’t been aware that Valvoline had been forced to close until receiving a letter Thursday afternoon.

“That was the first I heard that that was an issue or something that was undertaken,” she said. “Police are on site on Fridays and Saturdays to do traffic, to assist with traffic. They are also on site to adjust the traffic signal at the intersection of Rampart Road and Connecticut Avenue to try to help traffic move through that intersection more speedily. But as far as what they did with respect to the entrance into the Valvoline portion of the Stop and Shop site is that is within their control. And we did not direct them to do it.”

“Well, you didn’t direct them to do it,” Schulman replied. “But it appears it was as a result of, excuse the expression, the success of Chick-fil-A and perhaps Chick-fil-A ought to have a conversation, if you’re hiring the police officer, have a conversation with a police officer to see if there is another alternative short of closing Rampart Road so that your neighboring business is unable to operate.” 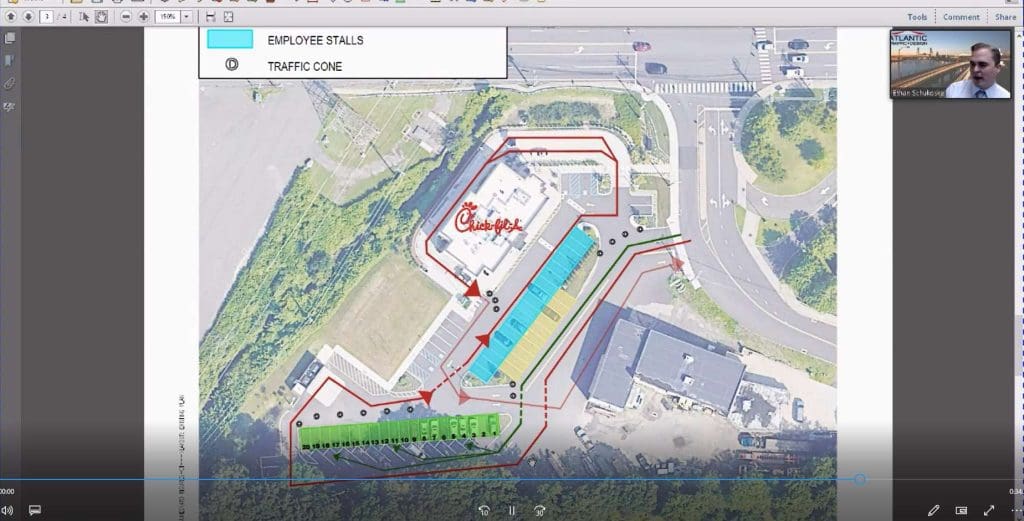 A new plan for the Connecticut Avenue Chick-fil-A.

Here’s an interrim solution… tear the $%&* down.

It’s appalling that so many area residents continue to support this company in light of their anti gay corporate activities.

And if 7-11 gets passed by Darien P&Z it will be an even bigger nightmare.

They should just close until November 2022.

This is an unfortunate outcome for a local entrepreneur – the franchise owner Mr. Archer Bullock (still?), and the city. But predictable, because Norwalk planning and zoning is amateur hour.

Just Google Map this plot – and compare it to the Popeye’s just a few feet up CT Ave. (that tells you all you need to know about planning). The Chick-Fil-A property is at least 2x the size, but because of the success – it still doesn’t fit. I don’t recall traffic problems due to Popeye’s – anyone?

This enterprise is boxed-in, and no amount of legal-dexterity by the “batting-1000 against Norwalk taxpayers wishes” attorney Liz Suchy can change that. You have powerlines, I-95, the Post Road (“CT Ave”), and Rampart Rd as obstacles to expansion. Are we really going to make them buy the building next door?

Norwalk planning should have known – with a 5th graders google search, that this plot wasn’t going to work for a business that has a proven track record of this kind of consumer traffic. I dare NoN to publish the initial traffic study submitted by Liz. And amateur hour Norwalk said – sure. Like Norden. Like BJ’s. Like everything in this city – build build build is the only mantra – it comes from Harry – and above him it comes from Hartford. They don’t give a poop about the negative impact on quality of life. But hey Norwalk, you keep electing him.

As for the cancel culture talk here – you should just pipe down if you don’t know what you’re talking about. This is a franchise – it employee’s what – over 120 people. The company pays for college. Your insults are ignorance. The blame for this mess belongs with our P&Z departments. Blame comes home. Own it.

It’s nice they are working to solve the problem. Chick-fil-A is one of the best, most organized fast food operations in existence. And I have patronized every one. Also,you really must respect their religious policies. Think how much more money they would realize if open Sunday.

Love it that the libs are getting their knickers in a twist. If it weren’t for the theatened misguided SJ boycotts the outfit wouldn’t be half as popular.

Imagine being annoyed that their religious ideas go against your ideas! Don’t shop there if you don’t agree with their ideologies. The food there is delicious, bottom line.

Popeye’s had traffic backing up past the Petsmart entrance in CT for weeks Ave when they opened. Again when they started selling chicken sandwiches and it will still drift out on some Saturdays.

Why P&Z couldn’t see this coming but will go to the mat over a backyard shed or treehouse near a property line is insane.

It’s appalling that so many area residents continue to support this company in light of their anti-decent fried chicken activities.

You want fried chicken? Go to Royal Guard on the Post Road, Miss Barbara Jean’s on Main Street, C&S on Woodward or probably 5 other places that I’ve missed or haven’t been to yet which make real food.