Voting is a civic duty for most people, not a life-changing event. But 2020 marked a monumental event for Baolin Ma and Renjiang Zhu, grandparents who voted for the first time in their lives in the Presidential election. The couple, born and married in China, now live in Wilton and are students of the Greater Norwalk Literacy Volunteers (GNLV) program at Norwalk Public Library.

Ma and Zhu are retired schoolteachers who came to the U.S. in 2007 to be with their son and grandchildren in California. They moved to Wilton in 2015 to be near their daughter and her family, but something was missing. They felt like strangers in their adopted country.

The problem was language. Though they were citizens and had studied some English in California, they did not feel like Americans. Ma and Zhu felt like outsiders because they spoke so little English. They had family, a church home, and some Chinese friends, but that was it. Everything else was closed off.

“America, Wilton, and the Norwalk Public Library have been very good to us,” Baolin Ma said. “And while we always wanted to give back to the people who helped us, we couldn’t do anything because we couldn’t speak your language.”

For instance, Baolin wanted to volunteer to talk about Chinese New Year at the Wilton Library when she first arrived. It was not possible, of course, but she did begin teaching a weekly Tai Chi class to some friends and their families.

Then something happened that turned out to be a real life-changer for the couple – they became students of the Greater Norwalk Literacy Volunteers (GNLV) program at Norwalk Public Library run by, now, Interim Library Director Sherelle Harris.  About three years ago, they began taking English lessons. It was slow-going at first. Imagine learning Chinese in your late-70s!

Harris, however, asked one of the program’s most experienced tutors, Alice Garrard, to speed things up. Garrard, from Redding, has been tutoring with the GNLV program for eight years.

“Alice is a terrific teacher, and my parents’ English has improved remarkably,” the couple’s daughter, Xuemei Zhu said. “She’s very patient with them, but always pushes and pushes them to reach for the sky, as my mother likes to say. They now have a wonderful relationship, and Alice has become a real friend.”

Xuemei elaborated, “Coming from China, to be voting in a real election was something completely new for them. Helping to select a national leader? It was hard for them to believe at first, but it was also very exciting, and they took it seriously.”

Ma and Zhu also carefully read “Easy English News,” a newspaper provided by the GNLV program, so they can understand world issues. Speaking and understanding English offers growing independence for Ma and Zhu.  They are making new friends and reducing their dependence on their daughter and son-in-law.

Ma also benefited from the GNLV in another way that she would rather have missed. She was hit by a car last winter, and she was able to talk to the first responders and hospital staff. It was very reassuring experience for her.

“Everyone is benefitting from my parents’ improved English,” Xuemei said.

Teaching the couple, watching them grow and develop, has been an inspiring experience for Garrard.  While she has taught adults much of her life – Sociology at the college level and advanced quilting when she moved to Redding – becoming a GNLV volunteer and working with Harris offered a different kind of satisfaction.

“Teaching people from another country is a completely different experience,” Garrard said. “They’re learning from me, of course, but I’m also learning from them. I’m learning about their culture, foods, customs, way of living and thinking.” 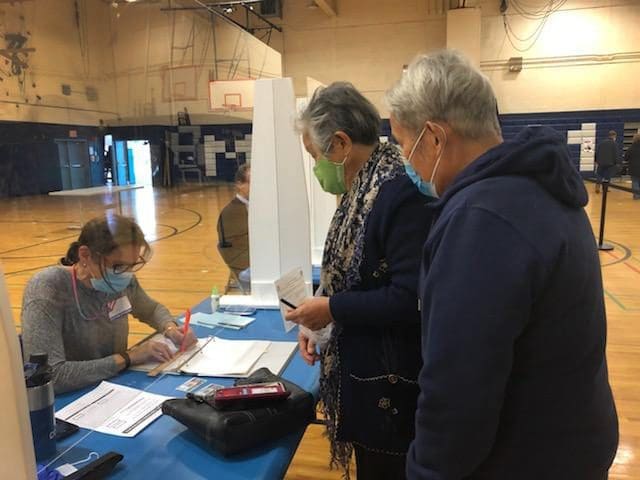 She said she’s proud of the couple, continuing, “With Reniang and Baolin, for example, they shared something of the horror of living under Japanese occupation when they were growing up. It was an education for me also, and I wish more people could know the circumstances many of our immigrants have faced.”

“Alice is an exceptional person and quite passionate,” Harris said.  “She is not only a great tutor, but she is an advocate and cheerleader for her students.  She is careful to stay within the parameters of the program and she is just plain easy to collaborate with.”

Harris added that it is news like this that makes her appreciate even more that the City of Norwalk funded the program so that the library could run it after Family Services of Woodfield, a non-profit social services agency, was no longer able to support it.

The program was formerly only housed at the library.  Former board Chair Stan Siegel came up with the idea to incorporate the program into the library’s operation and former Library Director Christine Bradley wholeheartedly supported it.  Current Board Chair and former Mayor of Norwalk, Alex Knopp, and former board member Susan Wallerstein sealed the deal.

Our mission is to teach adults to read, write, and understand English so that they may achieve their personal, educational, employment and Civic goals. Thanks to many dedicated volunteers like Alice, we are doing that and more.

Now that the election is over and much of the wrangling over it is, hopefully, behind us, how did Ma and Zhu vote? They are not saying. The know how to say “secret ballot” in English.

This is such a lovely story to read on Day One of 2021. It has so many examples of collaboration and hope and building community that reach well beyond the Norwalk Public Library door. Which shows (me), once again, how vital and impactful a well supported public library can be. Congratulations to Ma and Zhu and everyone at the Library. And Happy New Year!