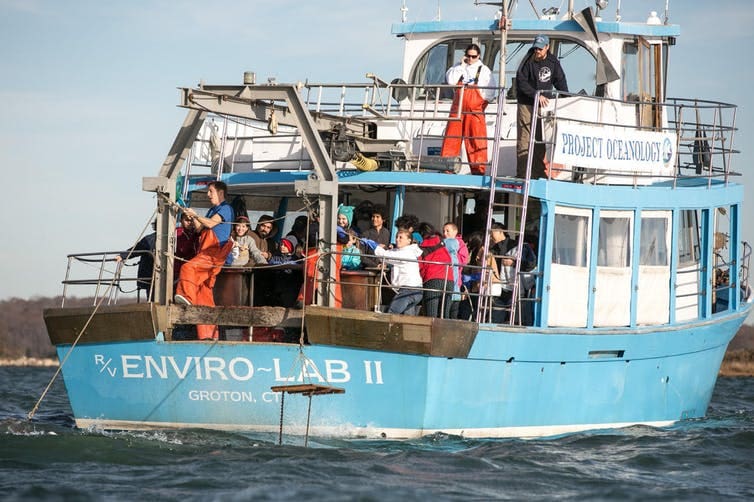 In the summer of 1973, Joe Hage was in the seventh grade. Together with his peers, he boarded the old Boston Whaler from Project Oceanology just as dawn began to shimmer from behind the trees of Groton’s Bluff Point. He remembers how instructors led the crowd into knee-deep waters, the velvety green marsh, eel grass tickling their mud-stuck legs, the crabs and snails and fish that flailed around in a beach seine.

To Joe, this was heaven. He was hooked for life.

More than 45 years later, the nonprofit Project Oceanology continues its mission to teach schoolchildren about the ocean. The organization shows students how to measure temperature, pH and oxygen, and lets them sift through trawl catches of fish and crabs. Next year, Project Oceanology will welcome the millionth student on board its bright blue boats.

The project did more than teach students about the ocean: It routinely collected data for more than four decades. On every boat trip, on every excursion, students scribbled their measurements onto protocol sheets. These records went into steel cabinets, which obliviously guarded a growing treasure, waiting to be lifted.

My master’s student Jacob Snyder and I decided to do just that. We painstakingly entered every recording from every data sheet we found in those cabinets. To us, it felt a bit like historians piecing together an ancient manuscript, anxious for the time when the data would finally speak. And then they did.

Our study, published on March 21, shows how rapidly temperatures in eastern Long Island Sound have increased over the past four decades. At 0.45 degrees Celsius per decade, the sound is warming four times faster than the global ocean.

This warming trend is true for the larger Northwest Atlantic shelf, of which Long Island Sound is a part, where some areas have warmed faster than 99 percent of all ocean waters on Earth. The reasons for the extraordinary warming of the Northwest Atlantic shelf are not fully understood. Scientists believe that the warm Gulf Stream is pushing farther north and onto the shelf. Polar regions are warming more than low latitudes.

Another symptom of marine climate change is ocean acidification, measured as a slow pH decline in the ocean as the water swallows the increasing amounts of carbon dioxide from human emissions. In coastal waters, pollution with nutrients like nitrogen and phosphate can come from sewers, wastewater treatment plants and fertilizer runoff, making acidification even worse.

The Project Oceanology data revealed that pH declined much more rapidly in Long Island Sound than globally, which could imply worsening conditions for shellfish farmers.

But there also seemed to be some good news. Around the year 2000, pH levels began to stabilize and even slightly rise again. This fits the timing of efforts by New York and Connecticut to curb nutrient pollution in Long Island Sound. However, rapid warming and acidification in Long Island Sound have had serious consequences for this ecosystem.

Here, our trawl data were particularly telling, showing that coldwater species such as American lobster, rock crab and winter flounder became less frequent over time. This is exactly what long-time instructors at Project Oceanology said they had noticed, too. Lobsters once supported a proud fishery in Long Island Sound, but warmer, more acidic waters, shell disease and overfishing have now decimated them to nearly complete absence.

However, a winner of dubious qualities emerged, too. Over the past decades, spider crabs have moved into Long Island Sound from the south and are now the dominant crab species in the trawls. But spider crabs are no equivalent to lobsters, neither for humans who do not like to eat them nor for the ecosystem, as spider crabs eat much more plant-based food than lobsters.

Long Island Sound has been rapidly changing, and the data collected by generations of middle and high school students just confirmed this again. Other data from Norwalk Harbor and the Connecticut Department of Energy and Environmental Protection have shown similar trends.

These changes are likely to continue. Lobsters are not likely to come back, because the waters are too warm now. Other species from the south, like black sea bass, will likely continue to establish populations in Long Island Sound.

Collectively, the data clearly show that marine climate change is happening right now in Long Island Sound. To better understand and anticipate the future of Long Island Sound, I feel that it is important that Project Oceanology and other groups continue their measurements.

This article is republished from The Conversation under a Creative Commons license. Read the original article. Hannes Baumann is Assistant Professor of Marine Sciences at the University of Connecticut.