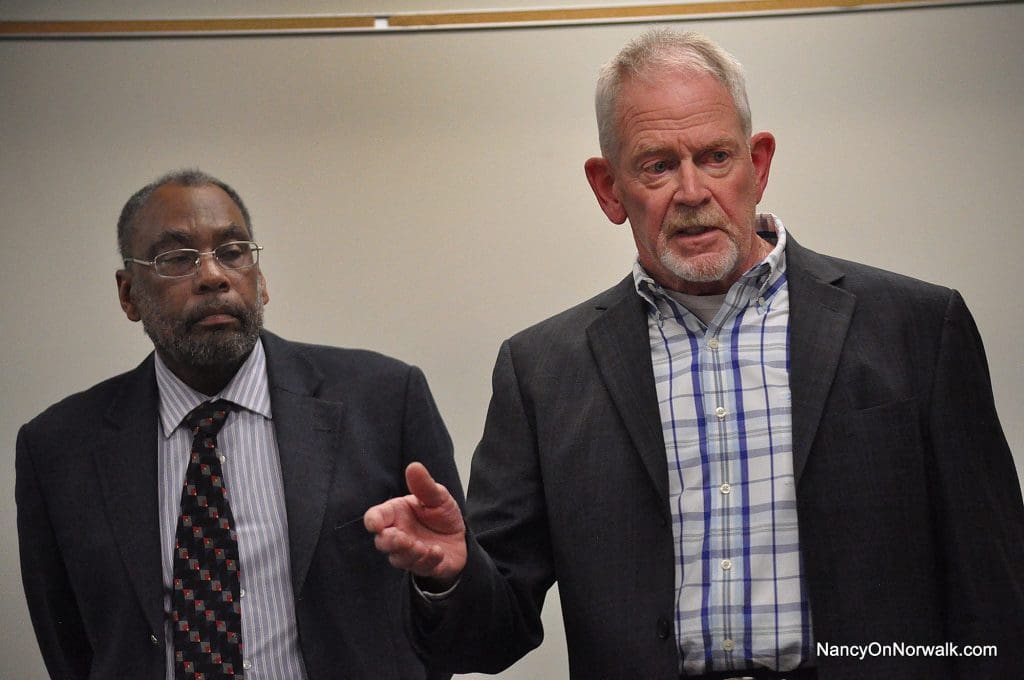 Then-Norwalk tax assessors Michael Stewart, left, and Bill O’Brien speak to Norwalk citizen during a 2018 City Hall meeting. Both left the City in 2019; Stewart has been replaced, O’Brien has not.

City officials describe these vacancies as supply and demand issues; qualified people are hard to find and the salaries offered have been below what candidates are willing to accept, they say.

Council members highlighted concerns about ransomware when they voted unanimously to create a CISO ordinance position in 2020, designed to protect both the City and Norwalk Public Schools. It stemmed from a security audit done by Blum Shapiro for $39,000.

“One of the key findings is we need a chief information security officer,” Norwalk Chief Financial Officer Henry Dachowitz said at the time.

The City advertised for the position shortly after it was created, Director of Personnel and Labor Relations Ray Burney said. Qualified candidates were identified but “were eventually eliminated either because we could not afford their pay demands, or because during the interview process we concluded that they were not the right candidate for what we needed.”

He said, “Unfortunately, candidates who are qualified to be CISO for Norwalk are high in demand.  … Good candidates can make much more money than we are willing (or authorized by the budget) to pay.”

After hitting that roadblock, “Discussions were had internally and with key {Common Council} members as to whether to continue to seek a full time candidate or to explore a part time or contractual relationship with a firm for these services.  Covid slowed down everything, so no progress was made on filling this position,” Burney explained.

Now, “like many other initiatives, this is on hold until Evergreen issues its final efficiency report on the City and Board of Education staffing levels and budgets,” Burney wrote.

Evergreen Solutions was hired to do an efficiency study of both the City and BoE operations. The report will be made public at the March 22 Common Council meeting, Mayor Harry Rilling said.

Evergreen “experts are preparing a recommendation for the City and the Board as to how this position or these services should be provided,” Burney said. “When Evergreen’s report comes out, the CISO position recommendations will be part of that report.  Everything is status quo until then.”

In 2020, Dachowitz and then-Information Technology (IT) Director Karen DelVecchio explained why the CISO position was being created.

“Municipal governments and school districts collect and store huge amounts of private and personally identifiable information (PII) in the course of serving their constituents,” they said in a memo. That includes “records regarding students and their families; criminal investigation data; birth/marriage/death records; health and medical data; and the social security numbers and payroll data of thousands of employees and retirees.”

“Government agencies and schools have demonstrated to cybercriminals they are easier targets and less-prepared to protect against cyberattacks. The size of ransoms which these municipalities have been forced to pay was upwards of several million dollars,” the Dachowitz/DelVecchio memo said.

“I typically do not comment on personnel matters, however, I felt it was important to let the public know this department is heading in a new direction. These changes provide me with the unique opportunity to transform the Assessor’s office. This department will be more responsive to the public going forward through improved customer service and communication,” Rilling was quoted as saying in the news release.

William Ford was hired the following January to be Tax Assessor but when it comes to replacing O’Brien, it’s been crickets from a news release perspective.

“Trying to find assessors in the state of Connecticut is exceedingly hard,” Dachowitz said March 3 to the Board of Estimate and Taxation. “We were fortunate to find Bill Ford in six months after the former assessor retired. The deputy assessor position has been open. We’ve been looking for qualified people to fill that. We’ve reposted. He’s changed the title, looking at qualifications. It’s just exceedingly hard in the state of Connecticut to find good senior assessor personnel.”

Corporation Counsel Mario Coppola said he’s been helping Ford try to find a new deputy but, “It’s a tough market for assessors and has been in Connecticut for some period of time. … It’s very, it’s very frustrating.”

East Haven, Trumbull and Bridgeport have been looking for assessors, Coppola said. He mentioned a salary of $120,000 and said “it’s really difficult to get someone who could otherwise be an assessor,” not a deputy assessor, for maybe $10,000 less.

Dachowitz added that the City had an offer to someone who worked with Ford in Massachusetts. “Because of COVID, they ended up declining the offer. They wouldn’t relocate,” Dachowitz said. “So it’s been difficult. No question.”

In October, Ford told BET members that half of the money that would be going to a deputy assessor, $60,000, would fund consultants on an hourly rate.

The BET approved a $60,000 budget transfer to cover that.

There’s “a couple of reasons” why a new deputy hadn’t been hired, Ford said. “One is COVID. You know, for basically the entire time we’ve been advertising it’s been during COVID.”

The Massachusetts candidate would have gotten a considerable pay raise, Ford said. The consultants have kept the department from falling behind and, “We are expanding the training of in-house employees,” but, “It would be quite some time before they’re available to be promoted to that position.”

Ford told Council members last week that while there are nine positions in his office, “We currently have a shortage of bodies in those positions.”

Including the long term absence of a deputy, he’s three bodies short. Ford said an “assistant assessor or assessment analyst” left to be the “top dog in another jurisdiction closer to his house, upstate” and there’s “somebody else that will be going off payroll shortly” due to a health issue.

The manpower deficit comes as Norwalk prepares for another property revaluation next year.

A bill under consideration by the General Assembly would allow municipalities to delay their next reval for a year. 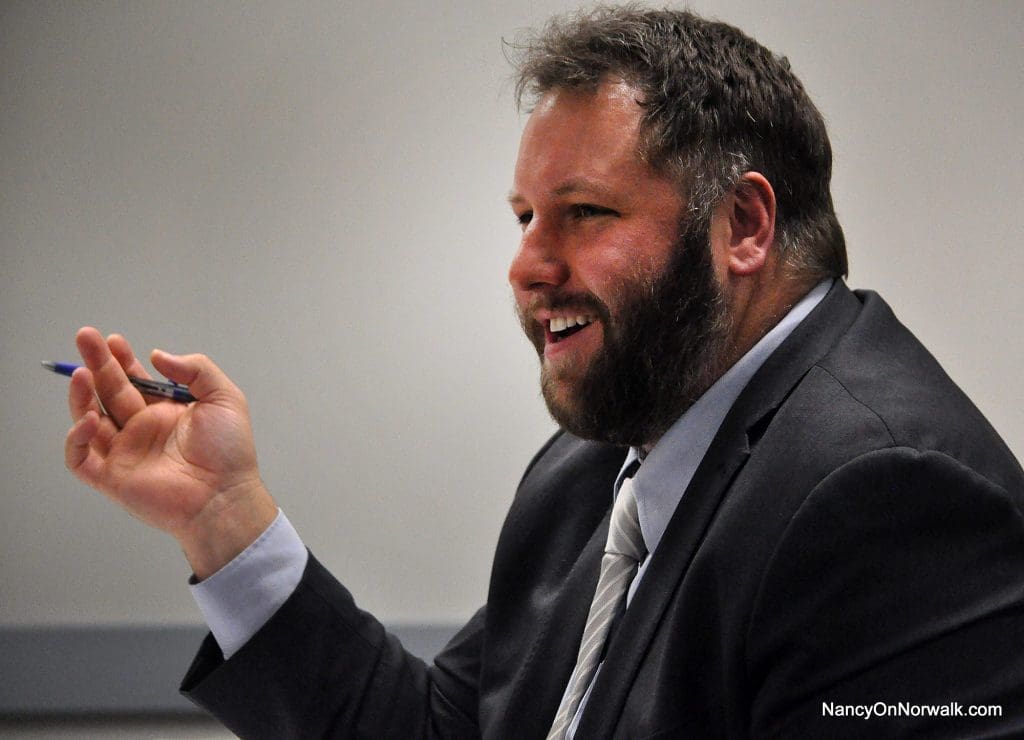 “We have a couple holes in our department, we have two vacant positions,” Coppola told the BET on March 3.

Assistant Corporation Counsel Brian McCann left in October to become a partner at Pullman & Comley, LLC, according to his LinkedIn page. He had worked for the Norwalk legal department for 13.5 years.

“A private firm took one of our guys from us,” Deputy Corporation Counsel Jeffry Spahr said to the BET.

“Quite frankly, we almost lost one of our other attorneys in the office who was heavily recruited by another potential employer, and we had to fight to keep them,” Coppola said.

“That shows we have good employees,” Rilling said.

Spahr, in a follow-up email to NancyOnNorwalk, said McCann was the only employee who had recently left. He indicated that an Associate Corporation Counsel position was vacant, as the funding had been used “for a while” for “outside help and to fund holdover staff support.”

Attorney Christie Jean was hired in November 2018 to be Associate Corporation Counsel. She reportedly left Norwalk in January 2020.

“We have now upgraded the position to Assistant Corp Counsel and will seek to fill both positions in order for us the address the growing demands that have been placed on our office,” Spahr said.

“We’re looking for somebody with some experience within the areas of land use and property tax assessment appeal defense work,” Coppola said March 3. “There were no applicants that had either had a significant experience in either area, let alone both.”

The position was reposted with a higher salary range in the “second go around,” and he wasn’t sure how that was going, he said. But, “Quite frankly, it’s a tough market for attorneys with experience in Fairfield County.”

In contrast the BOE oversees a demonstrably failing public school system and ignores conventional professional management hiring practices. Failing to employ Professional Search. But that hasn’t stopped the BOE from paying CT’s highest salary for a Supt and even extending the contract in the absence of any public evidence of achievement or improvement. Nor has the Common Council shown any interest in the refusal of the BOE to follow well accepted hiring parties and personnel management.

Our failing pubic school system and top CT salary for a Supt sends out a clear signal to potential applicants for City positions. Namely Norwalk is not a well managed City. As long as the leaders of our One Party City refuse to take interest in securing a much more well qualified BOE nothing will change. How many new applicants for City positions look forward to enrolling their kids into Norwalk’s failing public school system?

It seems that we are being prepped for steep wage increases. Where is the staff detail in the Recommended Budget? Every year the posted recommended budget has included staffing and salary levels. What is posted this year is indiscernible. Here is one from 2015. Compare for yourself. https://www.norwalkct.org/DocumentCenter/View/7805/201516ReccBudget?bidId=

What IS published in this year’s posted recommended budget are line item increases for wages (no headcount). The published salary increases do not support sub-standard wages at the City.

What a sleight-of-hand to blame public education for ballooning budgets to support this lack of transparency in double-digit salary increases for the City. People who live in glass houses should not throw stones. What audacity to set the stage here for further wage increases. I have not heard a peep from elected officials about these extreme increases in City wages. Perhaps the fox is guarding the henhouse.

I expect a 4% increase next year. I would like to hear how other readers’ expected wage increases compare to the City’s.

Considering the inflation rate has gone up 6.8% and climbing, the minimum wage has already gone up 7% this year, do you think a 4% raise is out of step with these numbers already in play?

I just wanted to respond that the old adage a little knowledge can be… dangerous may fit in response to some of the information commented on here.
For instance showing the Youth Services wages line item increased 75%. I can assure you Youth Services personnel did not get 75% wage increases. The increase represents some increase in staff, namely two part-time positions were made full-time. This is in response to the well documented mental health crisis amongst youth. Also for the first two years these part-time to full-time transitions are being supported with Federal ARPA funds not directly impacting the local taxpayer. I can’t speak for the other Departments listed but I’m sure the percentages listed do not reflect the “real story.”

When a government manager/ staff ration becomes greater than 1:10- you get bloated government, higher taxes and excess regulation

Put this all together and what do you get?

Not So Non Part

Not so Non Partisan – your comments should be the highlight to anyone or any party seeking office in the single party ruled city of Norwalk.
Its a platform