NORWALK, Conn. — South Norwalk has been chosen as one of seven focus areas for a State agency looking to help communities mitigate climate change.

The Resilient South Norwalk Steering Committee held its first meeting Wednesday. It’s a project guided by Resilient Connecticut, which has its roots in the havoc wrecked by Superstorm Sandy in Fairfield and New Haven Counties, as part of the HUD National Disaster Resilience Competition.

Current State guidance is for coastal communities to plan for a 20-inch increase in sea level by 2050, said John Truscinski, director of resilience planning at CIRCA (Connecticut Institute for Resilience and Climate Adaptation). Given a recent NOAA (National Oceanic and Atmospheric Administration) report’s “higher confidence that 20 inches is the upper bound of the likely range at 2050, Connecticut has decided to take a certain approach,” even though much depends “on what happens with emissions over the next 30 years.” 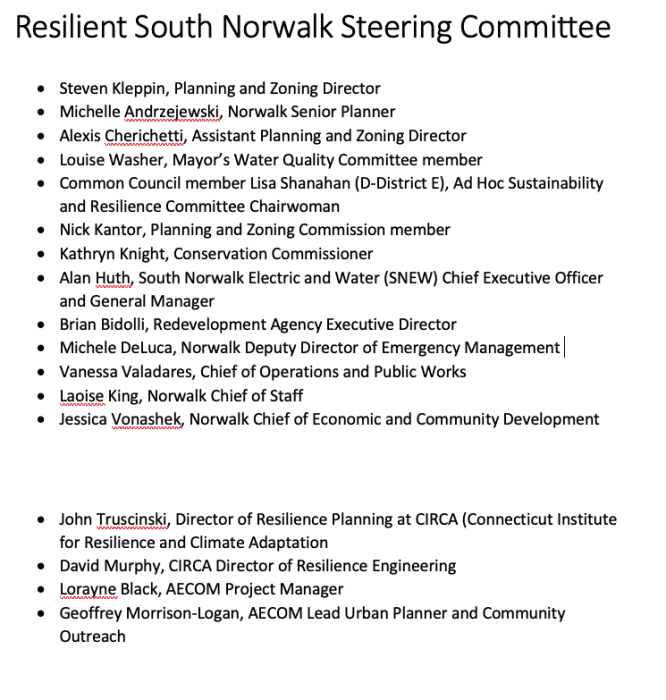 The Committee aims to study flood mitigation for the Water, Day and Concord Street areas, and develop egress and evacuation corridors for Woodward Avenue and Meadow Street, said Lorayne Black, a registered landscape architect with AECOM. Heat island mitigation is also a topic.

Community engagement is a key task for the Committee, as after the initial four Committee meetings, three public workshops are expected, Black said. The team is studying Norwalk’s plans for the area and preparing maps that show “all the different variations” in possible sea rise scenarios.

The Committee’s goal is to produce a report by the end of May, “which is going to be a great tool for the city,” Black said.

“The planet’s heating up faster than expected” and climate scientists are “learning as they go,” commented Conservation Commissioner Kathryn Knight. “If we do lose all the ice sometime between 2050 and 2100, you know, that’s 70 meter sea level rise…. combined with that, you also have more extreme weather events, because you’re going to have atmospheric shifts that happen and destabilize jet streams.”

Some of the visualization tools for sea level rise show some areas, “like Harbor View, even parts of Rowayton other parts of South Norwalk” will be completely isolated by water under some conditions, said Norwalk Deputy Director of Emergency Management Michele DeLuca. “I think by 2050 or so there are some areas that again, whether it’s for evacuation or just day-to-day access, may no longer be accessible.”

“I think we saw that with the latest storm in Florida where some people just didn’t understand this,” Black said. “They had lived there very long.”

Thank goodness we have smart people like Ms Knight tackling this existential threat to Norwalk. Although we still have some time, all residents living near the water should be required to raise their homes by 10 feet, maybe more. Candidly, if I lived in Marvin Beach, Harborview, and especially near the water In Rowayton I’d be selling and running for higher ground immediately.

While I find Climate serious business I find some of the above humorous. For instance, some quoted above live very close to the water. IF they were so concerned with 20″ or so of sea-rise wouldn’t they pluck their millions down on a house in the mountains? Just some food for thought from a pragmatic. I understand we pragmatics are temporarily going the way of the discipline in the classroom, but that has to change…

Clearly the solution is more apartments. More flushes into the river. More people living on top of one another. More cars idling in traffic taking 45 minutes to traverse the city. And then of course, more climate change mitigation entities, replete with full time benefits and pensions.

When they rebuild their homes 20 feet higher they should use battery operated tools and blowers. We dont want to disrupt the bees and insects