NORWALK, Conn. — It’s not just the playgrounds that will be upgraded at Ludlow Park, the tennis courts will be resurfaced and the softball field will be repaired with new clay, State Senate Majority Leader Bob Duff (D-25) said Thursday.

Duff met with Mayor Harry Rilling, members of the State delegation and others to highlight the $4.5 million State grant approved by the State Bond Commission last week, funding that will go to Norwalk’s parks.

The funding will pay for about half the improvements at Broad River Park, a City news release said last week. “Irving Freese Park will receive about $500,000 worth of new metal fencing, landscaping, lighting, and benches.”

City parks will have a colorful “uniform receptacle system” that will also accept recyclables, in side-by-side cans “decorated with the city logos so people will notice them and be encouraged to recycle,” Stowers said. 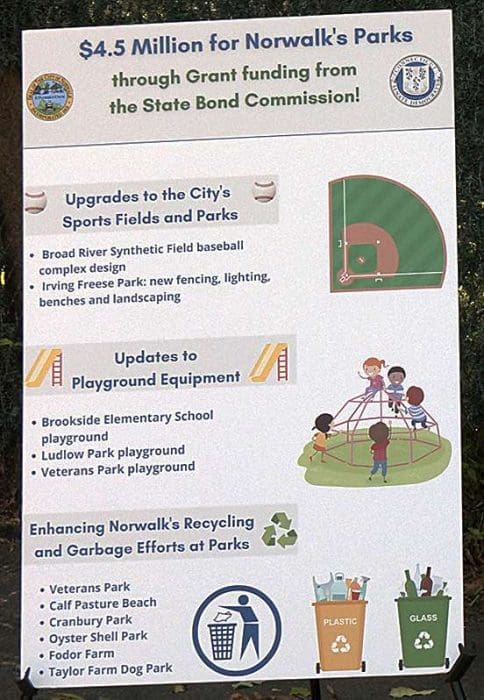 A City illustration of plans for $4.5 million in State funding approved last week.

“We will also be adding in-ground cans and uniform receptacle to cover those cans. This allows for more capacity for garbage and emptying less frequently, and it saves staff time,” Stowers said. “Typical underground trash containers can hold significantly more, up to six cubic yards, in contrast to the traditional dumpster that has a capacity of four cubic yards. In-ground cans are more efficient, economical and environmentally friendly. It’s a friendly waste management solution.”

On Friday, Duff said in an email to constituents that “the state funding will cover for a new a new mini-packer garbage truck and a large grass mower.”

Investments pay off, Duff said Thursday, recalling that Calf Pasture Beach used to be a summer destination but now has visitors year-round.

“The state has invested almost $10 million in just this year in our city parks,” Duff said. “That’s $5 million for Gallagher’s (Mansion) and Cranbury Park and four and a half million dollars here today. The city is investing in sidewalks and bike lanes, and so walkable/bikeable communities with outdoor recreations will be communities that thrive in the future.”