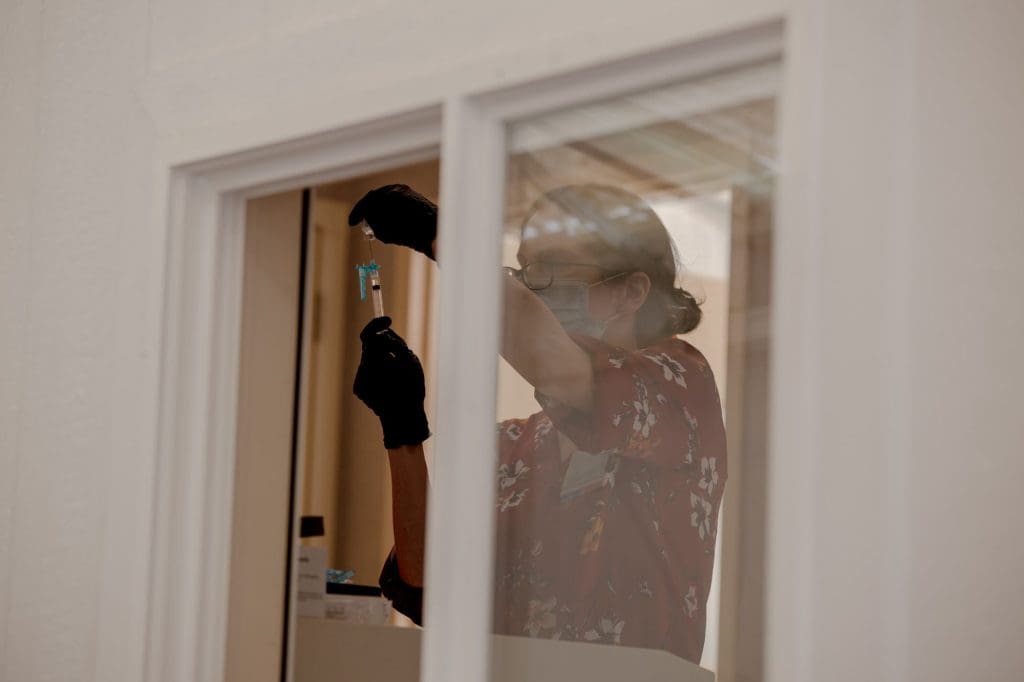 More than 50 sites will offer the on-the-spot vaccinations. Previously, residents were required to book an appointment in advance. For a list of providers offering walk-up shots, visit https://portal.ct.gov/vaccine-portal/COVID-19-Vaccination-Walkup.

As demand for scheduled appointments wanes, Gov. Ned Lamont said more supply has been freed up to accommodate the walk-ups.

Among the providers offering on-the-spot vaccinations is Community Health Center Inc., which runs mass immunization sites in East Hartford, Danbury, Middletown and Stamford, along with other clinics statewide.

CHC began taking walk-ups on Monday. People can show up without an appointment seven days a week from 8:30 a.m. to 4 p.m. A list of CHC locations is at https://www.chc1.com/covid-19-vaccine/.

“This is an important moment for Connecticut,” said Mark Masselli, the organization’s founder and CEO. “We want to make it as easy as possible for anyone needing the vaccine to get it without any barriers. Just walk in or drive in to any CHC site and we will vaccinate you without delay.”

To entice more people to get vaccinated, Lamont said Monday that certain restaurants will offer a free drink to anyone who presents a COVID-19 immunization card. The promotion will run from May 19 – when all coronavirus restrictions are lifted from businesses except for the indoor mask mandate – through May 31. A food purchase is required, and drinks are limited to one per person. A list of participating restaurants is at https://www.ctvisit.com/articles/DrinksOnUs.

“You come in, you get something to eat and you get a free drink,” Lamont said. “It could be a lemonade, it could be cool frosty; probably not their high-priced champagne, but we’re doing everything we can to give you an incentive.”

State health officials have directed vaccine providers in Connecticut to resume use of the Johnson & Johnson COVID-19 shot, following a decision by the Centers for Disease Control and Prevention to lift a pause on the use of the vaccine.

The CDC and the U.S. Food and Drug Administration had urged states to stop administering the Johnson & Johnson vaccine on April 13 after six cases of rare blood clotting were reported among women who received the shot.

The federal Advisory Committee on Immunization Practices met Friday, 11 days into the pause, and recommended resuming use of the vaccine. By Friday, nine additional cases of the clotting condition had been reported, all in women. Three people have died and seven remained hospitalized; four of them were in intensive care units. Thirteen of the cases were in women ages 18 to 49, while two were in women 50 or older.

Within two hours of ACIP’s recommendation, the CDC and FDA ended their suggested pause on the immunization, though the agencies said they will add a warning label to highlight the risk of the rare clotting issue.

Nearly 8 million people had received the Johnson & Johnson vaccine in the United States as of April 21.

“With the announcement from the CDC and the FDA, we have advised our vaccine providers to start offering the J&J vaccine again,” Deidre Gifford, Connecticut’s acting public health commissioner, said in a statement. “This pause and review will hopefully give people confidence that we take the safety of these vaccines very seriously and are committed to ensuring they meet the highest safety and effectiveness standards.”

In an email to medical providers late Friday, state health officials said those administering vaccines can use the supply of Johnson & Johnson shots “that is in inventory at this time.” Connecticut has 136,000 J&J vaccines in reserve.

Within the next week, providers will be able to request additional supply, they said.

“Providers may place orders for J&J in their order that is due this Tuesday for orders that will arrive on May 3,” health department officials wrote in the memo on Friday.

A mobile unit from the Federal Emergency Management Agency that is in the middle of a two-month tour across Connecticut will keep using the Pfizer vaccine “for the foreseeable future,” they said, and a fleet of mobile vans operated through the state health department will continue offering the Pfizer and Moderna shots.

“We are looking at the mobile units,” said Josh Geballe, the state’s chief operating officer. “We had gotten some initial feedback that we should stick with mRNA vaccines. But what we’re going to try to do is, particularly in cities where we have multiple mobile units going at the same time, have at least one of those offering Johnson & Johnson so that if someone has a preference, those options are available.”

Geballe did not say when the mobile units would start offering the Johnson & Johnson vaccine again.

“Oftentimes people kind of overread the relative risks,” he said. “So there was a little bit of initial apprehension. I think it will take some time to see how that plays out.”

The Department of Correction will administer the Johnson & Johnson vaccine beginning on Tuesday. The department previously had placed on hold its plans to use the one-dose vaccine in its jails, which have a higher turnover than the state’s prisons, making the single shot logistically easier for people who could otherwise be released from jail between their first and second doses of a Pfizer or Moderna vaccine.

Because of the rare correlation between the vaccine and the development of blood clots in some women, the agency will not be providing the J&J shot at York Correctional Institution, the state’s prison for women.

“Erring on the side of caution, incarcerated females will receive the Moderna vaccine,” a DOC spokesperson wrote in an email.

It’s unclear how use of the J&J vaccine will affect the compliance rates among the incarcerated population, a DOC spokesperson said, but the goal remains the same: to vaccine as many people under the department’s supervision as possible. To do that, the DOC is educating those in prisons and jails through videos, postings and flyers, as well as direct communication on the importance of getting vaccinated.

More than 4,360 people in Connecticut prisons and jails – less than half of all people in state correctional facilities – had been vaccinated as of April 21.

Hospitals will also likely request more shipments of the Johnson & Johnson vaccine to use on patients who are about to be discharged, officials said. Some small pharmacies have already begun using the J&J shot again.

As of Monday, 1.83 million people 16 and older had received a first dose of a COVID-19 vaccine in Connecticut, while 1.26 million were fully vaccinated. Sixty-six percent of residents 18 and older had gotten the shot.

Connecticut’s positivity rate was 2.82%, and 19 additional coronavirus deaths were reported, bringing the state’s total to 8,066.