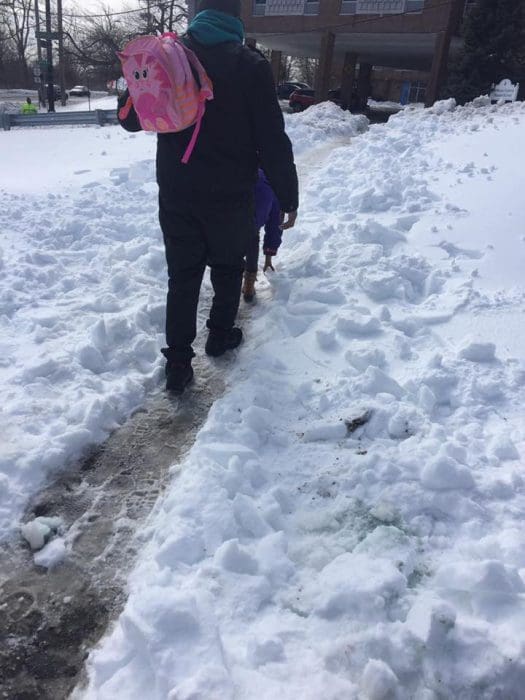 A picture of Jefferson Elementary School, posted Wednesday on Facebook.

NORWALK, Conn. — Sidewalks were the issue Wednesday for many people, in the wake of Tuesday’s less-than-blizzard.

Parents on Facebook decried the “unsafe” conditions their children were subjected to in going to school, with the unusual twist being a back and forth between State Senate Majority Leader Bob Duff (D-25) and Board of Education member Mike Barbis about the state’s Educational Cost Sharing (ECS) formula.

Meanwhile, a South Norwalk resident wrote to NancyOnNorwalk and others to suspect that the Norwalk Parking Authority had been shoveling sidewalks in SoNo.

“This is ridiculous!” a mother posted on the Facebook page Norwalk Parents for Education, with the above photograph. “This is one of the walkways at Jefferson this morning. The other side walk wasn’t even shoveled and the children were walking in the street! Not to mention the walkways for the portables outside weren’t fully shoveled. It’s a shame because nothing will be done until someone gets hurt!”

“I agree and it’s nothing new or unusual. That’s why I am pushing a Fix It First plan for our schools,” Duff responded.

“Go stay in Hartford and get us the money we deserve via ECS,” responded Barbis, who, as Facilities Committee chairman, devoted a year to developing the plan for two new schools.

“If Bob Duff was doing his job in Hartford, we would have enough money to have extra maintenance people and BMS systems so that these heat issues would not happen. He is short changing us by $25+ mm a year … that’s right!! So, please direct your anger to the right person,” Barbis said to the mom.

“Problem is no matter who we complain to, nothing changes or gets fixed,” she replied.

“This is what happens – deflect, blame and attack. Same folks who set policy for our kids’ education. Sad!” Duff said. “…Schools been neglected far too long.”

“Bob, I admire your enthusiasm towards our schools,” BoE member Erik Anderson responded. “This is something we have in common. However, the side walks are not a responsibility of the Board of Ed. Per union contract, our custodians are responsible for sidewalks within 25 feet of our schools. Since I have been on the board, we have been collaborating with the city to make this effort more productive to avoid situations that have been occurring today.”

“These walkways are not in the responsibility of the Board of Education; per union rules, from 50 feet outside the buildings the walks and parking lots are the responsibility of the City Rec & Parks and DPW departments,” BoE Chairman Mike Lyons said, addressing another mother. “We care very much… Mike Barbis has been pushing the Mayor and city departments to address this for years. ‘Fix it First’ wouldn’t even touch this.”

Duff supporter Mary Pugh left comments, but they had been deleted when NoN spied the thread.

“I think we all agree that school should perhaps have been closed or on a 3 hour delay. I would suggest that it is you who is injecting politics into the discussion,” Meyer-Mitchell said. 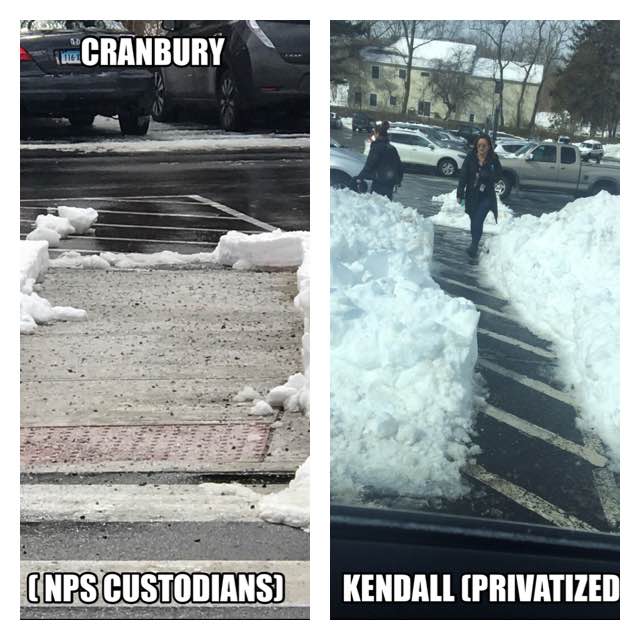 A picture posted Wednesday on Facebook by Norwalk Public Schools custodian Mark Wyatt, who said, “NPS custodians take pride in our work walkways should be wide enough for wheelchairs at the very least”

“DPW is not responsible for school walkways that’s the custodians and these are privatized schools this is our work at Cranbury,” Norwalk Public Schools custodian Mark Wyatt said.

“And cuts to custodian and maintenance lines in the budget can be linked directly to lack of funding, which in turn can be linked to Norwalk not getting its fair share from the state due to the unfair ECS formula,” Meyer Mitchell said, attempting to get people to submit testimony to Hartford.

“Norwalk should of close schools. Streets are very slippery sidewalks are horrible some are not even shoveled. As i was bringing my daughter to school walking i slipped and im 2 months pregnant had to get carry into a car and get a ride home. Now this was on C.M.S property This is not safe,” another mother said.

“I have just finished reading all the comments and I am appalled at the incendiary comments from Mary Pugh who represents Senator Bob Duff. I would like Senator Duff to comment about her behavior. Does he endorse it? Does he have a problem with his representatives trolling elected volunteers from both parties?” Isabelle Hargrove said.

“How is Bob Duff responsible for the schools not being cleaned?” a man asked. “If the schools have been privatized the responsibility falls on the school, I would think, since, you know, it’s private.”

“Bob Duff has no responsibility for sidewalks, and neither does the school system,” Lyons said. “The City Recreation and Parks Department is responsible (with the City DPW responsible for plowing the driveways and parking lots).”

“I am glad that mary pugh or her boss senator duff realized how inappropriate these comments, accusations and tone were. I would have preferred an honest apology. But I am glad that people on this thread spoke up against it and discouraged the political gaming,” Hargrove said.

Meyer Mitchell, on another thread, wrote,”I know we are all burned out. The budget process, fix it first, school galas and fundraisers….it’s a lot! However, we have one more big fight that ALL of Norwalk can unite behind, and that is ECS funding. … Lots of testimony helps our case. I urge you to write and submit testimony this week to [email protected] THIS IS VERY IMPORTANT! CONSIDER IT YOUR HOMEWORK FOR NPS THIS WEEK!”

NancyOnNorwalk asked Norwalk Public Schools Communications Director Brenda Wilcox Williams about the decision to open the schools, trying to verify that it was Superintendent of Schools Steven Adamowski’s decision. This is her emailed response:

“Dr. Adamowski has delegated this authority to Dr. Costanzo in his role as Chief of School Operations.

“As you can imagine, the decision about whether to close or delay school is always a tough one, and it’s one that’s taken very seriously.  After consulting with DPW, our contracted meteorologist and Fairfield County area superintendents, Dr. Costanzo made a decision based upon the best information available at that time. Based on that, Norwalk and most surrounding towns determined that a two hour delay would be appropriate today.

“Our DPW crews were working for more than 24 hours straight and were able to clear city streets and school parking lots prior to school opening.  Residents have 24 hours from the end of the storm to shovel their sidewalks. Snow that iced over during the night did make it more challenging to get some walkways fully cleared this morning. As always, we do our best to combat whatever mother nature sends our way.

“We appreciate the feedback offered today from parents and the community, and will keep it in mind when the next storm comes our way.  Hopefully, spring is right around the corner!” 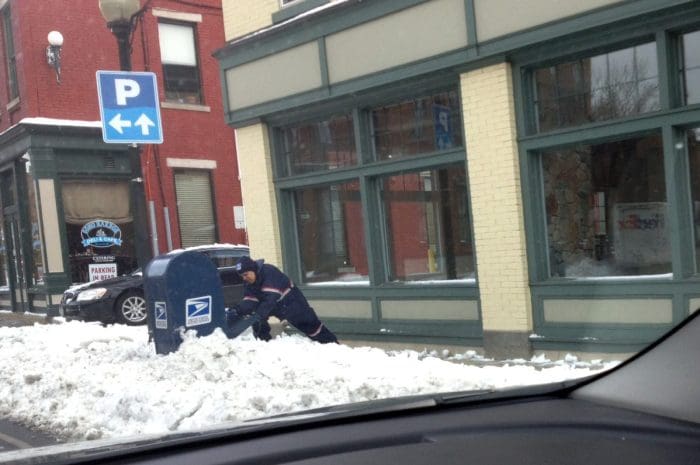 “How is this cost concious when the city hires a crew to do what the Dpw did efficiently for years?”

DPW has responsibility for clearing snow from “footpaths” near the schools. This was discussed at length when the council was “updating” the snow shoveling ordinance a couple of years ago.

Mr. Chimento made it clear at a budget meeting that his priorities for “safety” begin and end with the roads for cars.

We should be able to evaluate our snow displacement dollars. Perhaps fewer plows and more bobcats and snow melters are a beetter investment in snow REMOVAL.

Please clarify, is it 25 ft from the school building or is it 50 ft? If the school custodians stop at 25 ft and the DPW doesn’t start until 50 ft, I can sure see where there’s a problem.

So Chairman Lyons misspoke when he said: “per union rules, from 50 feet outside the buildings the walks and parking lots are the responsibility of the City Rec & Parks and DPW departments” ??

Sometimes things happen in which no one actually has done anything wrong. One can never be ready for such a storm and once over it does take a while before everything gets normal again.