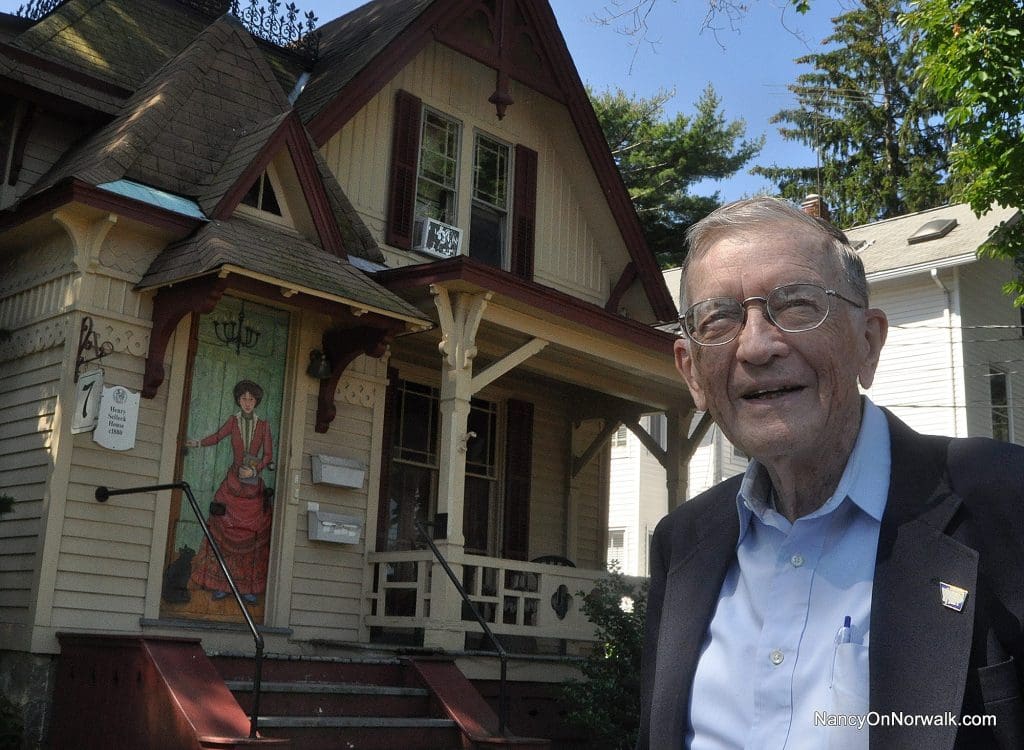 NORWALK, Conn. — An idea spawned by Ireland has made its way to Norwalk’s Berkeley Street through the activism of former Mayor Bill Collins.

“The idea, of course, is to try to inspire other property owners in Norwalk to perhaps take up the same plan and paint on their doors,” Collins said at a recent press conference, standing near the newly painted front door of a house he owns. “Norwalk is quite an art center. We have never gotten much into neighborhood art. One thinks of painted doors in Dublin, Ireland, which not only have created an atmosphere there but also a tremendous tourist attraction. It happens in this neighborhood that there’s some pretty nice doors and there’s some pretty nice old buildings. They can go well together.”

Collins hired Norwalk native but Bridgeport-based artist Elizabeth Hartstein to paint the door of his house at 7 Berkeley St. at a cost of $2,000. 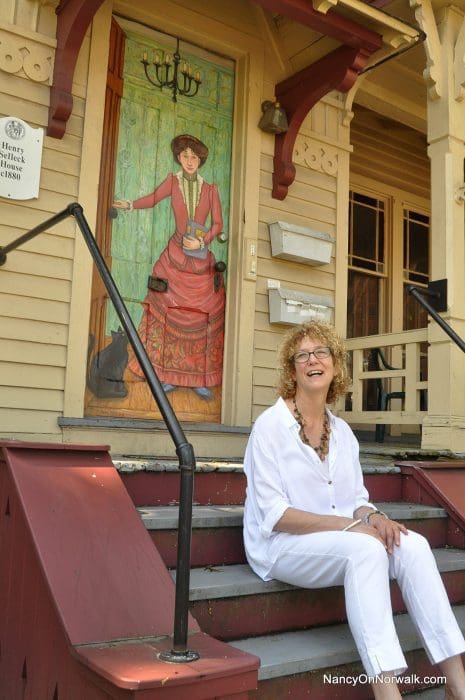 Bridgeport artist Elizabeth Hartstein sits on the step at 7 Berkeley St. in front of the door she painted for former Mayor Bill Collins.

“What I would really like to do is persuade the Redevelopment Agency to include door painting as part of their façade improvement program,” Collins said.

“I don’t have a clear idea of what the project would be. Bill hasn’t presented a proposal so I am not sure if it’s one door or a cluster of doors, etc., or what sort of assistance would be requested.  Certainly as a public art project, it certainly would define a place … the place of the painted doors and for sure it is whimsical and memorable,” Redevelopment Agency Senior Project Manager Susan Sweitzer said on June 21.

The façade program funds improvements that include decorative details on a building, Collins said.

“As long as you have the program, our feeling is, why not offer them some financial support to put decorative paintings on their front door,” Collins said, adding that no other town in Connecticut has a painted door program that he knows of.

Collins’ home, which he rents out, was built in about 1880 and is called the “Henry Selleck House.”

The woman in the painting comes from Hartstein’s imagination, she said.

“We did little sketches of different ideas, including abstract patterns,” Hartstein said. “… Playful was what we were going for.”

“While Norwalk is strong on art, it’s been a little short of whimsical art,” Collins said. “We have a couple of traffic control boxes that are pretty cute but when you get beyond that, the stuff to make you smile is not that common. So hopefully we’ll start something here today.”

The cost for the door also included “a few hundred for the door removal,” Collins said, adding, “I thought it was pretty reasonable.”

The door “weighs a ton” and wrestling it off was difficult, he said. Then it had to be sanded “forever,” he said.

“The last time the door was painted was right after we bought the house 40 years ago. We had it on horses in the living room,” he said.

Collins and Hartstein had their eye on the door across the street at 10 Berkeley, which includes a dental office. The “unusual shape” is an elongated rectangle, as there’s the door and then a panel over the door. 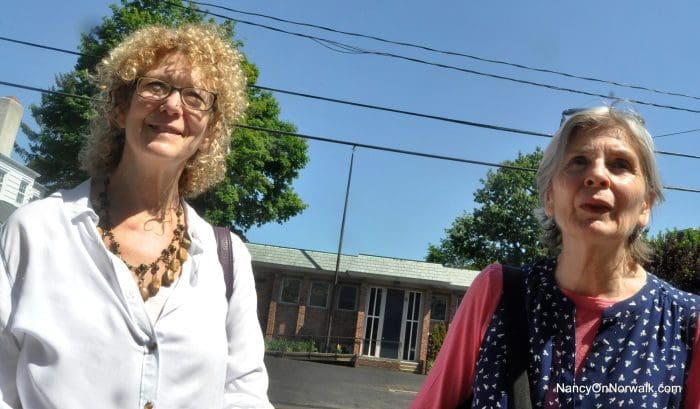 Artist Elizabeth Hartstein, left, and Dennis Bradbury, director of South Norwalk’s 22 Haviland St. Gallery, look at the door she painted on Berkeley Street. Behind them is the oddly shaped doorway at 10 Berkeley.

A painting of a Penny Farthing Bike or a guy on stilts would be fun, they said.

Hartstein said she grew up in Norwalk’s Cranbury section but was forced to move to Bridgeport six years ago by the high cost of living here. She lives in Read’s Artspace.

“I am Norwalk-centric,” Hartstein said. “Even though I have moved up to Bridgeport much of my work is around Norwalk, Fairfield County. I love Norwalk. My son grew up here, too – he loves Norwalk. I still feel like it’s home.”

“Bridgeport is the mother lode of artists now because space is so cheap,” Collins said.

“Artists like Liz need to be hired, to not only get in on the creative economy that brings tourist to town, but to keep people not only living and thriving in the city but keep them from leaving,” Bradbury said.

Norwalk Arts Commission Chairwoman Susan Wallerstein said Collins has been a “champion for public art for a long time,” bringing murals to South Norwalk when he was mayor in the ’80s.

“Murals became an important part of the redevelopment of South Norwalk, but also Norwalk, too,” Collins said. “Because I’ve traveled a lot in the world. I don’t have any original ideas. People have had a lot of original ideas and I’m big on plagiarizing. So if I’ve learned important lessons elsewhere, why not use them here?”

The wife of the house next door is interested in a painted door, but has to convince her husband, Collins said.

Getting Redevelopment onboard is one goal, Collins said.

“The other is to see if we can get neighbors to follow the lead, and maybe inspire people from other neighborhoods,” Collins said. “It would be great if we could have a common practice in our city.”1

I like it. Public art can brighten the landscape, create more of a community feeling and can bring a smile to our face.

Delightful. A brilliant counter to the crime-scene-tape failure on the West Ave wall.

Terrific idea! There are places all around the country that create public art on doors and literally bring home the personalities of a community. Bill’s concept does many things–telling us about the historic past of Norwalk, piquing interest, and contrasting with the contemporary look of changing Norwalk. Love it.

I prefer Zhao’s “Gateway to Norwalk” piece on West Ave. And my children are intrigued by it as well! It’s modern public art. These doors are more folksy. Different people, different art, different tastes & preferences.

Thought… The people on the doors: will there be a diverse group of people represented on the doors? From different eras? All the same era? Of different socioeconomic status? Different heritages?

The crime scene tape is only art if you know what it is. I only know what it is from N-O-N. If not just another piece are garbage blown into the bushes.

“Whimsical”. A joint description of both the delight one would expect from a passer-by, – – and Bill Collins’ sense of humor. And believe me, I know the latter! Best wishes to a lovely town.