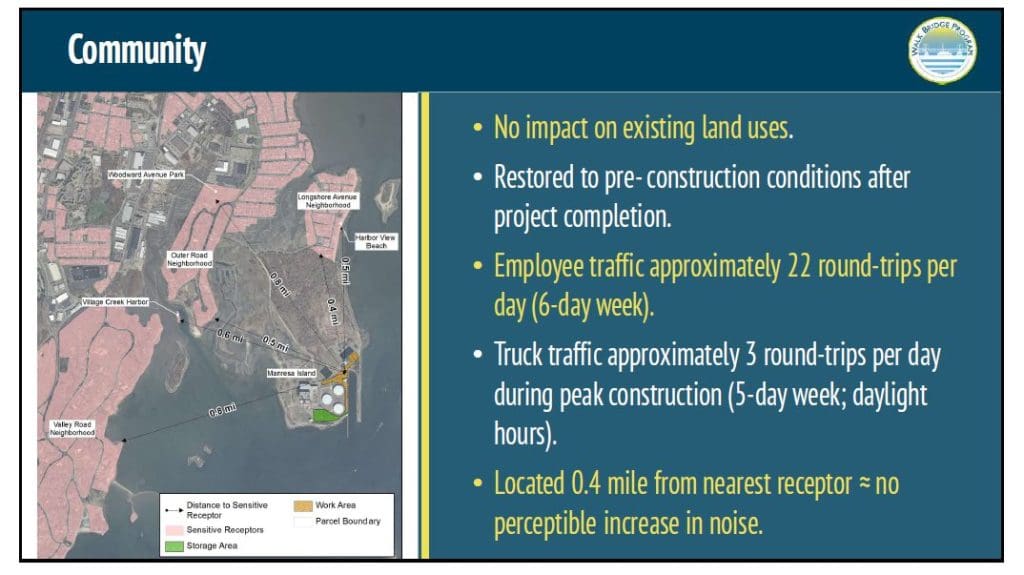 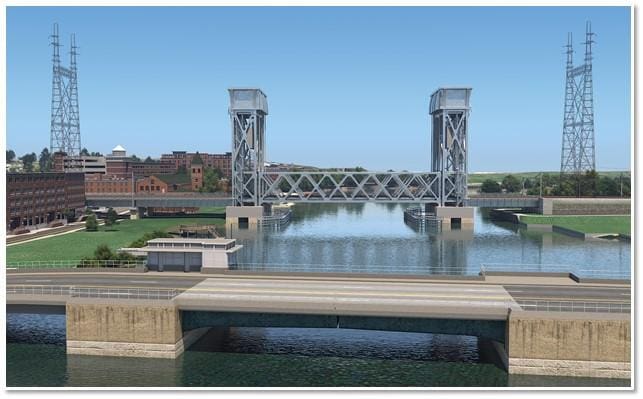 A rendering of the lift bridge set to replace the 1896-built swing bridge over the Norwalk river.

NORWALK, Conn. – State officials and construction consultants on Tuesday assured Norwalk residents that the plan to use Manresa Island for Walk Bridge construction activities will not result in excessive additional traffic down Woodward Avenue.

“The additional 25 trips per day added to Woodward Avenue will represent less than 1 percent of the road average daily traffic. That’s using 2017 data,” said Sarah Walker of HTNB, the Connecticut Department of Transportation’s design consultant in the Walk Bridge project.

ConnDot has been publicly saying it will use properties at 68 and 90 North Water St. for construction activities. It’s now thought the lift spans will be built on barges off Manresa.

“If we use the Manresa Island location, we can avoid the additional dredging and construction of a bulkhead at the Water Street location,” ConnDOT project manager John Hanifin said. “There are many advantages by doing that, because the existing Manresa site has the current infrastructure already in place. Those are the two main differences between the two sites. I think the industrial setting of Manresa makes that site more favorable over the Water Street location right now.” 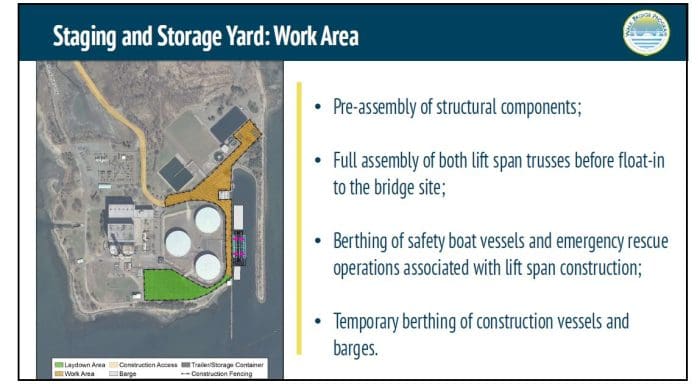 Manresa Island is the location of a defunct power plant, now owned by NRG. It’s two nautical miles south of the Walk Bridge and a barge would travel to the site probably less than once a week, at a speed of two to three knots, ConnDOT Manager of Facilities and Transit James Fallon said.

“We’re pretty close to the federal (navigation) channel when we’re working down at North Water Street, so really what we’re talking about here is relocating the water-based construction of the lift spans out to Manresa,” Fallon said. “The Water Street properties will still be used for lay down staging yard. But obviously the intensity would be a little bit less because we’re doing the lift span construction out at Manresa.”

Construction is expected to take five years. Manresa would be also used for mooring safety vessels and the liftspan construction there will take 3.5 years, Fallon said. The activity level would “certainly fluctuate during that timeframe so people wouldn’t expect to see a lot of activity during the entire 60 months.”

Less than a quarter of Manresa’s southern parcel and none of its northern parcel would be used. NRG would be able to demolish its power plant, if it desired, officials said. 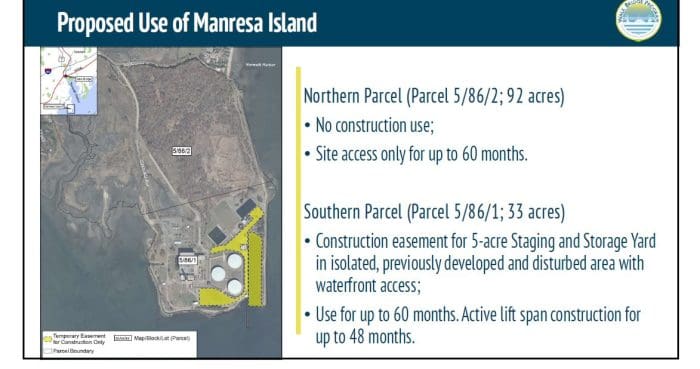 The plan takes construction away from the urban area and none of Manresa’s buildings will be touched, Fallon said. The Manresa activity would be .4 miles from the nearest house; a citizen said sound travels differently over water and ConnDOT officials promised to look into that.

An unidentified speaker, affiliated with construction contractor Cianbro-Middlesex Joint Venture (CMJV), said the barges would stick out into the navigation channel if the work were done on North Water Street. “It’s the size of the bars that’s required to assemble the lifespan on that really governs our decision,” he said. The 90-foot by 240-foot piece of equipment is “much better suited to use the deepwater facilities at Manresa than it is to try and do it a Water Street. While we can do it a Water Street, it would be preferable to use the Manresa, that is a beautiful facility for what we intend to do.”

Cianbro doesn’t intend to do night work, he said. The “most disruptive” truck traffic will occur early in the project, when 10-wheelers bring in gravel for the separation barrier that’s planned. Once the pad is built, in a short period, truck traffic will go down to one truckload a day.

“They can’t promise that there won’t be any noise ever. At any point during construction, that’s to be expected. So, but we’re always going to try and be open about what our plans are,” Mike Mendick of ConnDOT said.

The lift span will be 60 feet high but, “the only thing that people would notice would be our crane… roughly 240 feet high,” the Cianbro representative said. “…The crane isn’t loud. People don’t realize probably one of the noisiest things is driving the drip pins to make the connections.”

“It’s our intent to work almost exclusively in daytime hours,” he said. “If we should happen to get behind and need to work late, we would obviously need to ask permission to do so. But we would like to think that we can do all this work during daytime hours, it might take extended shifts 12-hour shifts, up to six days a week. But it is certainly our intent to perform this work, and whether we do it at Manresa or we do it down in on Water Street will face the same challenges.” 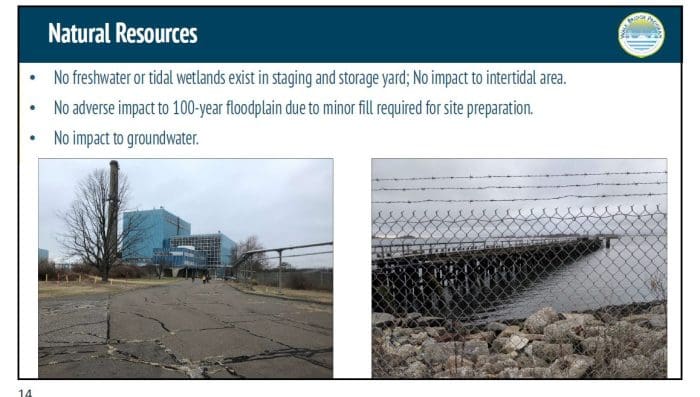 Truck traffic will take Martin Luther King Drive to Monroe Street, to South Main to Woodward, he said. Smaller trucks will go down Water Street, as it depends on overhead clearance.

A citizen asked about nesting ospreys.

The Connecticut Department of Energy and Environmental Protection (DEEP) has imposed restrictions, Walker said. Work will begin before April 15 or after Aug. 1, to allow the ospreys to become accustomed to the noise level and activity before the nesting season.

A six-inch layer of crushed stone will be laid over geotextile fabric to create a separation barrier over the entire work area before construction starts.

“All fuels and hazardous materials will be securely stored in double-walled and flood-proof containers,” Lauren DiGovanni of HNTB said. “Any lead-containing fragments from the existing bridge components will be stored in drums that will be removed at the end of each workday. In the event of a forecast storm, containerized materials will be moved off site… by truck.”

“When we’re done, all that stone and geotextile will be removed from the site so that any future remediation activities can take place and it won’t involve state taxpayer dollars for remediation,” Fallon said.

“We are going to have consultation with the city in terms of comments that we receive in utilization of Manresa and or another site,” Fallon said. “…We do have to submit our permits, which we’ll need to include Manresa as a staging yard, if that was the decision that that we ended up with. Those permits would also be open for public review and comment. And then in terms of overall project, we certainly are advancing the design. We want to get the project out to construction as soon as possible. So we anticipate completion of design at the end of this year and then we’ll advance to construction.”

As a resident of Village Creek, I asked several questions in a few different ways that were left unanswered, and unaddressed:
1) What will the decibel level be in the surrounding neighborhoods? What measures will be taken to ensure that sound levels are kept ‘imperceptible?’
2) We will need a point contact made available to address concerns and issues throughout the project timeframe – this is a very basic ask
3) Will there be a turnaround for the trucks to negate backup beeeping all day.

These questions and many more will need to be addressed.

speaking of CT DOT projects, when will the Yankee doodle bridge be completed?

There is COAL ASH on this site. Coal Ash, as some may or may not know, is more radioactive than Nuclear Waste. (https://www.scientificamerican.com/article/coal-ash-is-more-radioactive-than-nuclear-waste/)
The Manresa site needs to be remediated before anything happens on this property.
The Manresa Association has been working to address this for the last several years.
How on earth can the CT DOT guarantee safety? They are not equipped to address this and appeared to be woefully ill informed on the subject.
All towns that border Long Island Sound (NY + CT) should be raising concerns on this. This can no longer be ignored.

It seems each time we learn something new about the Walk Bridge project, it’s not something good. I’m sure the residents in that area weren’t expecting to be effected by this project.