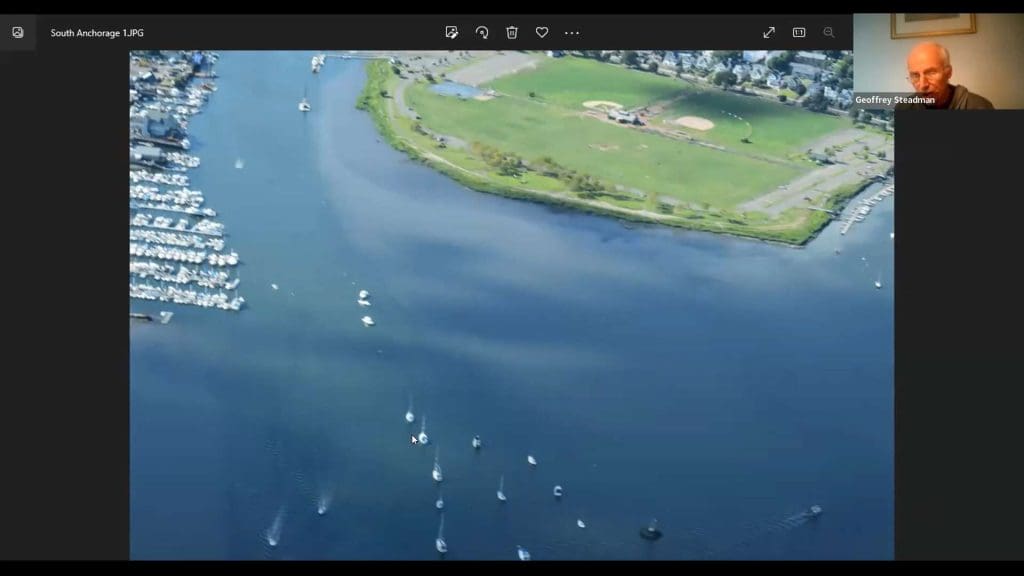 Coastal Area Planning Consultant Geoff Steadman on July 27 tells Norwalk Harbor Management Commissioner that Connecticut Department of Transportation barges will be moored in the area at bottom, where his pointer is, under a Department of Environmental and Energy (DEEP) permit, although private boat owners hold the mooring permits now. 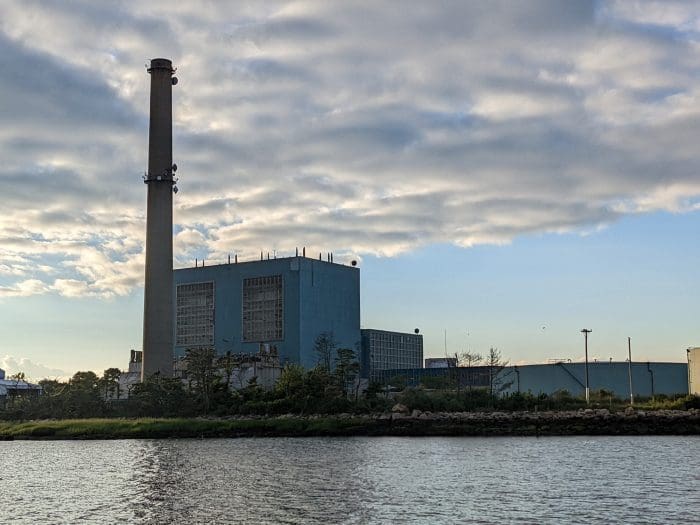 Harbor Management Commission members plan to push back on the DEEP permit, complaining that their concerns “were not addressed in any substantial way in the hearing officer’s comments.”

DEEP clearly wants to “run roughshod” over the Harbor Master’s authority, Norwalk Harbor Management Commissioner John Pinto said. Commissioners agreed to write to the Attorney General and ask for clarification on State Statutes because this would affect other Connecticut towns.

The Connecticut Department of Transportation (ConnDOT) seeks to replace the 1896-vintage railroad swing bridge over the Norwalk River, commonly called the Walk Bridge, with a movable lift span bridge. It’s a massive project that involves a federal navigation channel.

The construction is regulated by the Tidal Wetlands Act, the Structures Dredging and Fill Act and portions of the Coastal Management Act. ConnDOT’s application “complied with the relevant statutes and regulations,” Hearing Officer Kathleen Reiser wrote in the June 6 proposed final decision, commenting, “This is an administrative process to determine whether the application and Draft Permit meet the applicable statutory and regulatory requirements. In this case, they do.”

Norwalk Power LLC, owner of Manresa Island and its defunct power plant, filed for intervenor status in February but the courts denied that request. Norwalk Power LLC dropped the issue. 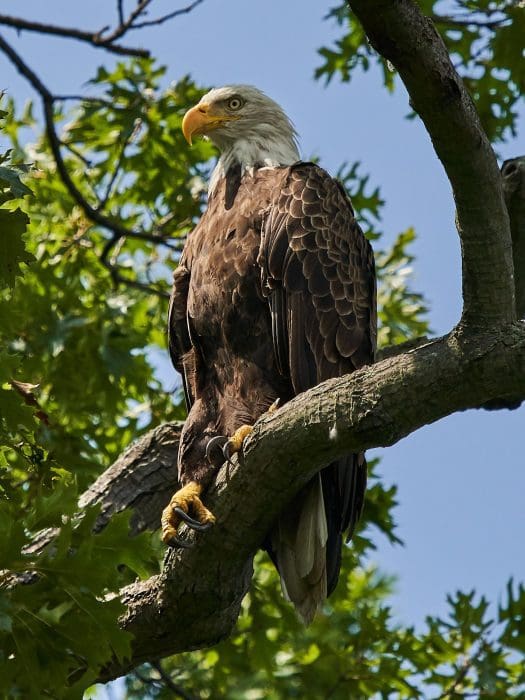 Norwalk neighbors opposed ConnDOT’s plan to use Manresa Island as a staging area for construction of major Walk Bridge components. The permit includes requirements related to Manresa’s wildlife, Reiser wrote. There won’t be dredging or “formal structures,” minimizing the impact.

Although Lone Star ticks were a topic of public comment, DEEP’s Natural Diversity Database (NDDB) doesn’t cite them either a species of concern or a nuisance species and they’re prevalent in other Norwalk areas, Reiser said.

The work isn’t being done where coal ash is an issue and steps will be taken to isolate the work from the existing conditions, according to Reiser.

ConnDOT considered other locations and studying traffic impacts, volunteering to restrict construction activities to 8 a.m. to 5 p.m., she wrote.

“In 2012, the Norwalk Power plant was open and employed thirty-seven people, and also generated truck traffic. In comparison, the work at Manresa Island will require twenty employees and approximately three trucks per day,” Reiser wrote.

In addition, “the anticipated worst case noise levels would be allowable under the Norwalk Noise Ordinance” and ConnDOT “must follow state guidelines for construction, which includes monitoring of noise generated through the project,” Reiser states. 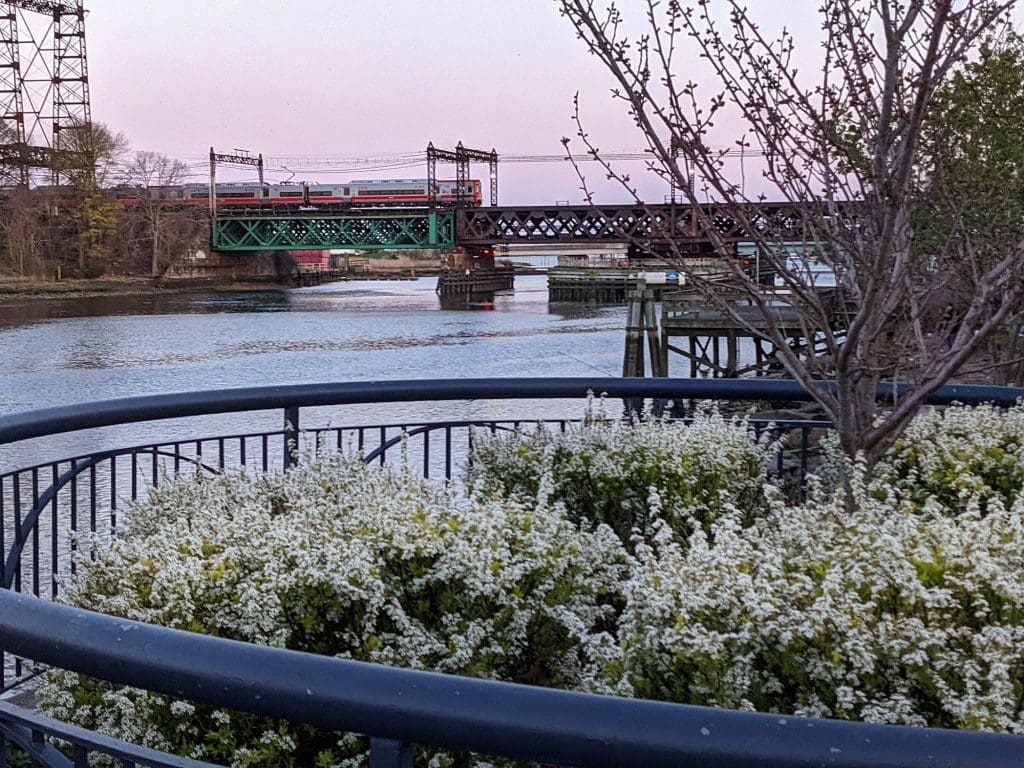 The Walk Bridge in April.

While the decision responds to the Manresa neighbors in detail, Reiser ticks off her responses to the Harbor Management Commission in one paragraph.

“We spent seven years reviewing this project. And we I think we did a pretty good job of thoughtfully presenting comments and concerns,” Steadman said in the July 27 Commission meeting. “…They weren’t even stated what the comments were, except in the most general terms.”

Reiser cites a court case, Cohen v DEEP, and states that the Commission doesn’t have special standing in the matter, nor “power to make binding recommendations on an individual permit.”

The permit authorizes ConnDOT to place moorings in the harbor for scows and barges but general statutes state these need a permit from the Harbor Master, Steadman said.

“Are they overlooking the Harbor Master’s authority? Or are they saying the Harbor Master has no authority?” Steadman asked. “I think that question is something that deserves a letter of inquiry to the Attorney General’s Office. Otherwise we’re going down the wrong, you know, a bad path.”