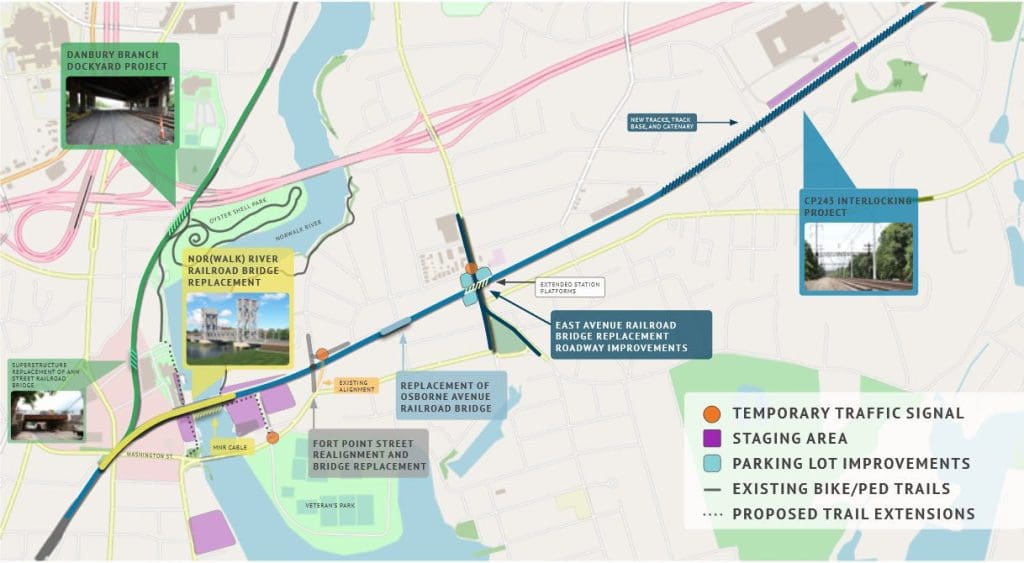 The Connecticut Department of Transportation was working Dec. 9 on an underwater cable, dredging near the Walk Bridge, Shellfish Commissioner Steven Bartush and Norwalk Police Officer Mike Silva said at Wednesday’s Harbor Management Commission meeting. Although the permit said the work could only be done with “appropriate containment” and only on an incoming, or slack tide, the curtains designed to contain the silt released by dredging were “inadequate,” Bartush said. The tide was heading out, meaning that silt was heading toward the shellfish in the harbor.

In addition, Norwalk Police were supposed to be notified if a diver was going to be at work, but dive flags were at the site Friday and police knew nothing of it, Bartush said.

“There was no safety boat there. And then a safety boat showed up, and then the safety boat left. So this was still not an outgoing tide. It’s not being what was agreed upon,” Silva said.

The silt barriers were inadequate, again, and the tide was heading out, Bartush said.

ConnDOT spokespeople did not reply to an evening email asking about the situation.

The state is working to replace the 124-year-old, deteriorating railroad bridge over the Norwalk River, a behemoth project that affects all of Norwalk, as ConnDOT decided to renovate all of its railroad bridges here while the equipment is in town. Construction on the Walk Bridge itself is expected to take five or six years.

The underwater cable is part of the related “CP243” project, a series of switches north of the Walk Bridge designed to allow trains pass as only two of the bridge’s four tracks will be open as the work is done.

The cable “is a small little job compared to the whole thing that’s going on, the bridge work. If they’re messing it up this now, what’s going to happen when they start the big stuff?” Shellfish Commission Chairman Pete Johnson asked.

Bartush said he’d sent a letter to the Connecticut Department of Energy and Environmental Protection (DEEP) on behalf of Johnson.

“There was a subsequent investigation,” Bartush said. “The communication made it pretty clear that they were caught red handed.”

There’s no recourse, other than what DEEP might be able to do, Harbor Management Commission Chairman John Romano said.

“No one was formally notified that this project was beginning. We knew it could start on such and such a date based on certain conditions. But we weren’t actually informed to my knowledge that it was as a project had begun,” Romano said.

Silva said he and Sgt. Pete Lapak saw dredging and materials being offloaded into a dump truck.

“That’s who I’m supposed to contact if I have any problems. And all he basically does is try to tell me, ‘well, they weren’t working yet.’ I said, ‘Well, don’t you think it should be set up before they work? Not while they’re working?’ And he stuttered. He doesn’t give me a straight answer,” Johnson said..

“If you’re dredging, offloading material, you’re setting up the turbidity curtains, what’s not ‘working’? I don’t get it,” Romano replied.

Coastal Area Planning Consultant Geoff Steadman reminded everyone that years ago, then-Department of Public Works Director Bruce Chimento announced that his department didn’t have the resources to do the necessary oversight on the Walk Bridge project.

“I don’t know whatever became of that, but maybe we just would bring this up again,” Steadman said.

“Their resources are even thinner now than they were then,” Romano said.

“That’s right on the money, because what we need to do is to be proactive, and we all don’t have the time. We’re hit and miss,” Romano said. “They started that project a week before we even saw that it was going on. And we need someone that’s going to be third party, paid by the state, most likely chosen by us if we can, to have that positive continuity going forward. Because otherwise, we wind up in trouble. This whole project has too many components to it, too many phases, too many layers. And, even though it’s been given to us in bits and pieces, those bits and pieces have to come together at some time. So we need to have that oversight. No question about.”

Susan Prosi Johnson was hired in 2017 as the City’s Walk Bridge program manager, a one-year contract that was renewed in 2018, also for a year. She hasn’t been mentioned publicly in years, but Shellfish Commission Chairman Pete Johnson brought her up Wednesday.

“But we don’t need one like that woman that was there,” he said.

“Sue Prosi was an advocator for everyone else but the city,” Romano said.

The Commission decided to write a letter to Mayor Harry Rilling to emphasize the need for a project oversight position during the construction.

Romano said it was like anything else, the people doing the construction want to “get it done,”and “They’re taking a shot.”

“That doesn’t cut it for us. Because we have a lot of stuff that could be affected from it,” Romano said.

“Right,” Johnson replied. “All you got to do is get that mud flowing somewhere and it gets in an oyster or something and the whole industry is dead in this area. And these people don’t understand it. All he cares about is getting the job done.”

“If their modus operandi is such today, at a minor part of the project, what is it going to be like later on? So we have to start from day one,” Romano said. “And we all have been extremely cooperative, pro-project, just want it done right, with all the safeguards in place.”

Rilling, in a Thursday evening email said, “My team and I are aware of the complaint and are reviewing the details. It is imperative for all requirements designed to protect our harbor be adhered to. Nothing less is acceptable and if violations are found corrective action will be taken. The City is prepared to do everything necessary to ensure compliance.”

Disturbing! Who’s in charge of contract compliance and QA on this project at the state level? I’ll be interested in hearing what corrective action Mayor Rilling is able to get the state to commit to.

In response to Mayor Rilling’s comments on taking necessary action: It is clear that ConnDOT has no regard for following the rules. Imagine how much worse this will be when they have even less oversight on Manresa Island.

Mayor Rilling, it’s time to stand up for Norwalk. It’s time to shut down Manresa to ConnDOT for once and for all.

I am very surprised the shellfish commission has not voiced much concerns over the use of manreasa a as the build location. The area around manresa is full of shellfish bed.

Good News, the Norwalk Harbor Management and the Norwalk Shellfish commission have voiced their concerns for the use of Manresa in the Walk Bridge build. See: Jan. 5, 2022 here: https://www.manresaneighborhoodcoalition.org/manresa-and-construction-of-the-walk-bridge-a-history