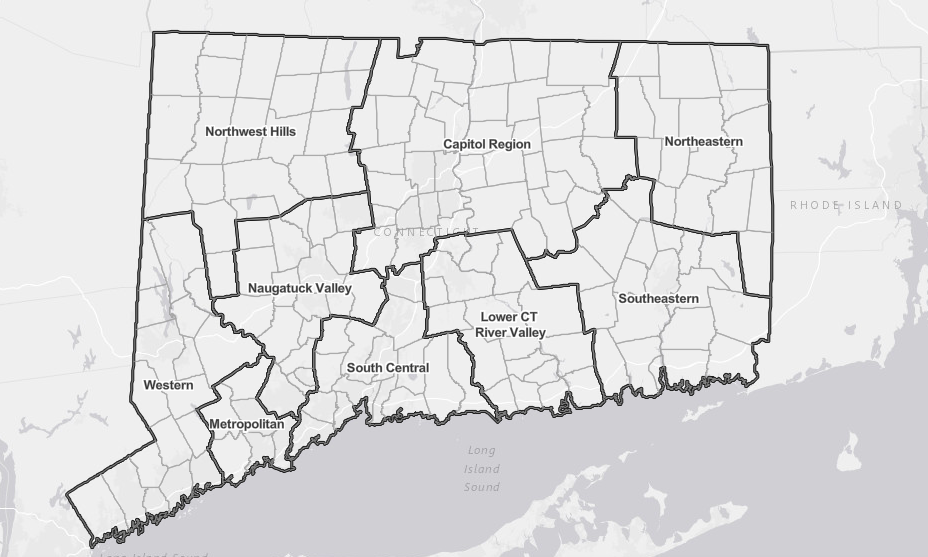 Connecticut did away with county level government in the 1960s but now the U.S. Census Bureau is allowing Connecticut’s nine Councils of Governments (COGs) to function as county-equivalents, according to a press release by Gov. Ned Lamont.

Connecticut’s COGs are essentially councils of municipal leaders who meet for planning and development purposes, particularly when it comes to infrastructure, and allows those leaders to implement plans on a regional basis.

“In Connecticut, the nine COGs exist to address matters of mutual interest to their constituent cities and towns, with each member city and town represented by its highest elected official. They function as regional planning organizations, coordinating activities for their constituent cities and towns, and in that capacity can exercise a variety of responsibilities typically undertaken by counties in other states,” the Census Bureau wrote.

The number and geographic space of Connecticut’s COGs don’t exactly match up with Connecticut’s counties but for the federal government’s purposes, the distinctions were close enough.

Office of Policy and Management Secretary Jeff Beckham said the designation will not result in any significant changes for Connecticut municipalities, as the purpose of the designation has more to do with the gathering and dissemination of federal statistical data.

“There will be no significant impact on how state or local governments are run because of this change, however by ensuring that future census data and products are published along planning region boundaries, town leaders will be in a stronger position to coordinate regionally on matters such as procurement of goods and services, public safety, education, health, transportation, tourism, and other shared issues,” Beckham said in Lamont’s press release.

COGs do not have the ability to levy taxes the way counties in other states do, but they can collect dues from participating municipalities and can accept other forms of public and private funds.

Interestingly, according to the Census Bureau, COGs can administer a regional property tax if the member municipalities all agree to it. The Census Bureau cited this administrative ability as one of its reasons for approving the change.

“In this regard, as well as the ability to provide the variety of services listed below, Connecticut’s COGs and associated planning regions have the authority to carry out administrative functions that are typically found in county governments in other states,” the Census Bureau wrote.

“This is a positive change that will benefit all of Connecticut’s cities and towns to ensure that census data and products are provided in a way that more accurately reflects how the state functions today,” Governor Lamont said.

When the apparatchiks make changes and tell you that the changes will not impact you…look out. And tell me that “dues” won’t be going up…

“COGs do not have the ability to levy taxes the way counties in other states do, but they can collect dues from participating municipalities and can accept other forms of public and private funds.”

If you believe this drivel, I have a bridge to sell you in Brooklyn. The COGs were converted from the old regional planning authorities conveniently as a next step to reinstate county-level taxing authority, albeit with limited function. No one will admit that and they’ll deny it breathlessly, but it known inside information. When Connecticut eliminated county government around 1959, it didn’t sit well with some that a level of political power had been eliminated. This occurred at a time when Connecticut government was far more conservative and before Lyndon Johnson’s Great Society made taxation great again. With the deftness and skills of a surgeon, the one-party Connecticut legislature will slowww-ly begin to collect tax through the COGs for more reasons than ever before, and under the Trojan Horse guise of restructuring the oh-so-unfair local property tax system.

Gee…if only someone had warned that the move from regional planning agencies to COGs was just a feint to return county government. Oh yea, I did, loudly. Stand by for the implementation of a county tax in 5, 4, 3, 2…

Is there any other small State in the USA with just 3.5 million and 169 towns and cities with oodles of public officials ? Surely CT would benefit from County wide governance in major manners. Do we really benefit with having almost 150 separate school districts with highly paid Superintendents ? When many school districts like Norwalk do not meet Ct Edu Dept guidelines nor do most CT students ever secure 4 yr college degrees. Our 169 towns and cities public employments help make public employees CT’s biggest “industry”. And the high taxes needed to fund those separate governments help explain our embarrassing decade long stagnant economy/population/employment level. Some consolidation of CT’s colonial based local governance is long overdue. Its embarrassing even for CT Dems.

And there you have it. Now it is clear why Bob Duff wants his new Bob Duff Memorial Regional High School.

Piberman yet again points out some salient points

This is just another step that will enable the venal politicians in Hartford to tap into well managed towns and cities and turn Corrupticut into a completely failed state.