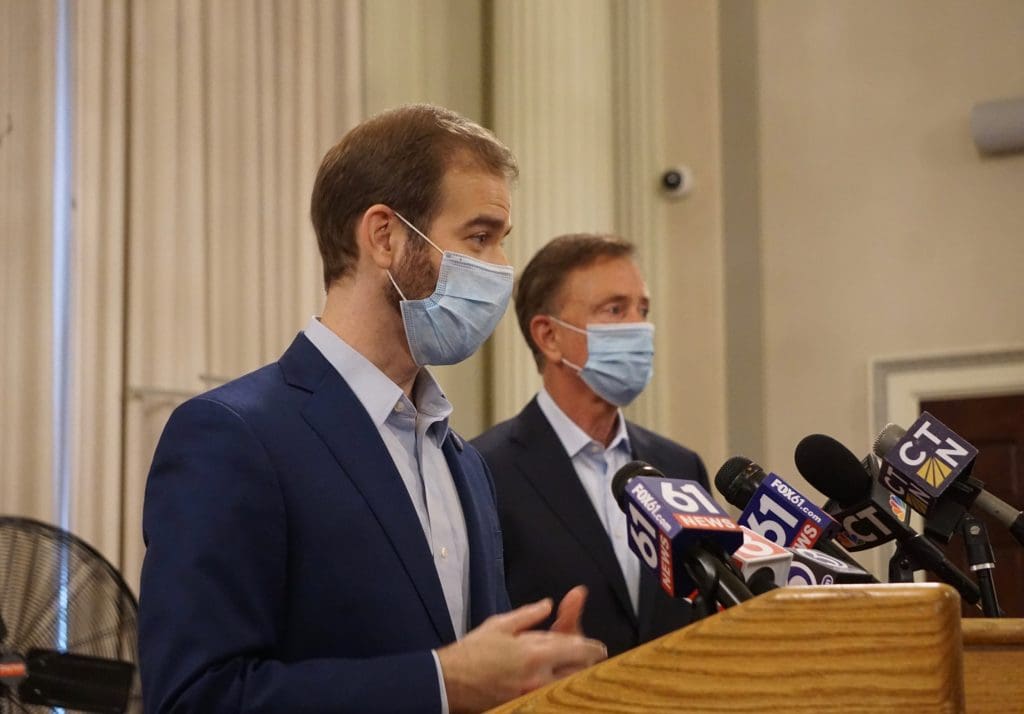 The masks stayed on Friday when Hartford Mayor Luke Bronin and Gov. Ned Lamont got to the microphone. (Mark Pazniokas, CTMirror.org)

HARTFORD, Conn. — Gov. Ned Lamont reacted cautiously Friday from both a political and public-health standpoint to President Donald J. Trump having COVID-19, news that brought uncertainty to the presidential campaign and spasms of sympathy, snark and schadenfreude.

The Democratic governor expressed concern about the president and first lady and offered no criticism of the routine disregard for public-health guidelines about social distancing, masks and other precautions by Trump, his family and his campaign.

“Our thoughts and prayers go out to the Trump family,” Lamont said.

Lamont was advised by an aide before an event Friday morning that he was the first governor speaking in public since the news broke, and that New York broadcast media was recording video and audio via the feed provided online by the public affairs network, CT-N.

The governor mentioned a personal connection, then pivoted to a public-health reminder. Lamont served with Hope Hicks’ father, Paul Hicks, on the Greenwich Board of Selectmen in the 1980s.

“All the best to her and her family,” Lamont said. “It just reminds you that we want to continue to err on the side of caution.”

U.S. Sen. Chris Murphy did not shy from calling out the president.

“The president’s positive test is a reminder of the consequences of failing to adhere to public health guidelines,” Murphy said in a statement. “We won’t know the exact method by which the president contracted the virus until a full, transparent contact trace is done, but it has been crystal clear for months that Trump, his family, and his staff have been deliberately ignoring CDC advice, putting themselves and anyone they come into contact with at great risk.”

Lamont, who has mandated social distancing and the wearing of masks, said the president’s news prompted him to reassess his own precautions, including most likely requiring regular testing of his staff for the first time.

“I think it was a wakeup call. It’s a wakeup call for a lot of people who were beginning to get very casual about COVID and wearing the mask,” Lamont said. “I’ve been getting tested regularly, every two to three weeks for some months now.”

Neither Lamont nor anyone on his staff has tested positive, he said.

The governor said he and Lt. Gov. Susan Bysiewicz would try to avoid attending the same events, particularly those held indoors. Lamont said he is grateful that Vice President Mike Pence has tested negative.

The State Capitol has been closed to the public since mid-March, though it was open to legislators and staff during a special session this week. Most of Lamont’s press briefings and public events have been conducted via video calls or outdoors, though not all.

Lamont spoke Friday at a ceremonial signing of absentee-ballot legislation inside Hartford City Hall, accompanied by Mayor Luke Bronin. Both have promoted the safety of voting by absentee during the pandemic.

Bysiewicz normally plays a role at all bill-signings, making introductions. She did not attend.

The governor wears a mask at public events, typically removing it when speaking publicly, the pandemic habit for many elected officials in Connecticut. On Friday, the mask stayed on even when he stepped to the microphone. The same was true of Bronin.

Throughout the pandemic, Trump has taunted Joe Biden for wearing a mask — a position that is at odds with the guidance of the Centers for Disease Control and Prevention. Trump most recently mocked Biden’s mask regimen Tuesday at the presidential debate.

“Every time you see him, he’s got a mask,” Trump said. “He could be speaking 200 feet away from it. And he shows up with the biggest mask I’ve ever seen.”

The president’s children arrived at the debate wearing masks, then removed them for the 90-minute program. Biden’s contingent wore masks through the entirety of the debate.

Moderator Chris Wallace asked Trump about his views on masks.

“You’ve begun to question the effectiveness of masks as a disease preventer. And in fact recently you have cited the issue of waiters touching their mask and touching plates,” Wallace said. “Are you questioning the efficacy of masks?”

Trump pulled a mask from his pocket and said,  “I put a mask on when I think I need it.”

Masks have been been less politically divisive in Connecticut which, Murphy observed weeks ago, seems to have developed an apolitical “mask culture.”

But a handful of Republican legislators have participated in lawsuits challenging Lamont’s executive orders during the pandemic, including a requirement for wearing masks at stores and other public settings.

Murphy called for transparency about Trump’s health — the White House said he had cold symptoms — and criticized the president for risky behavior, including holding a rally indoors in Tulsa, Oklahoma.

“Trump’s rally in Tulsa, where virtually no one was wearing a mask and attendees were prohibited from social distancing, led to an outbreak of the virus in that city, and former presidential candidate Herman Cain, who attended the rally, contracted the virus shortly thereafter and died,” Murphy said.

“The president’s diagnosis, and his failure to protect the nation from the pandemic, present a serious national security vulnerability that our adversaries may attempt to exploit. Thus, the United States must monitor threats closely and remain incredibly vigilant in the coming days,” Murphy said. “America can beat this virus, but only if we all engage in the behaviors that have proven to be effective at stopping transmission. The president has waged a nonstop war on mask wearing and social distancing, which has been the largest contributing factor to the failure of our nation to overcome this pandemic.

“Until we have a vaccine, and as long as President Trump continues to thumb his nose at public health precautions, America cannot beat COVID-19. But just because he won’t set an example doesn’t mean that the rest of us can’t.”

“I wouldn’t wish this virus on anyone,” she Tweeted. “Praying for the President, his family and staff for negative results and a quick recovery.”

Sen. Murphy’s infuriated and obsessed attacks against Donald Trump reached overwrought levels when he said Vladimir Putin would be the President’s campaign surrogate while Trump is recovering from the virus.
Murphy’s continuing harangues like this make a person wonder just how capable the senator really is and why Connecticut voters keep him in office.