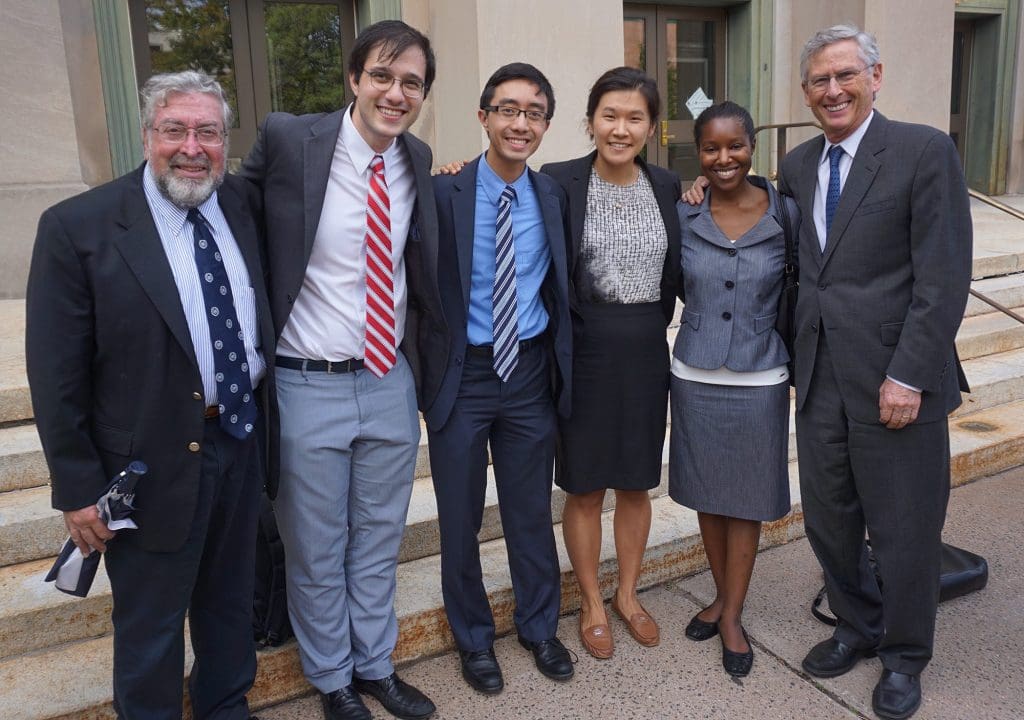 The Yale Law School CCJEF team: former Norwalk Mayor Alex Knopp at left, Attorney David Rosen at right, and current or former students who participated in the case in the middle, according to Knopp. (Contributed photo)

NORWALK, Conn. – A Connecticut court on Tuesday ordered the state to revise its educational funding system, in a decision hailed as a victory by those who have been fighting for more than a decade as members of the Connecticut Coalition for Justice in Educational Funding (CCJEF).

“To get rid of an irrational policy, adopt a rational one.  It’s the court’s job to require the state to have one. It’s is the state’s job to develop one,” the decision written by Judge Thomas Moukawsher states, giving Connecticut 180 days to propose reforms.

“The judge’s landmark ruling validates our decision in 2005 to bring a constitutional lawsuit challenging the education funding system in Connecticut,” former Norwalk Mayor Alex Knopp said in a statement to NancyOnNorwalk. “I’m very pleased that the judge agreed with our principal claim that the cost sharing formula violated the state constitution on the ground that it was arbitrary and irrational because it did not address the true costs of meeting the educational needs of students in Norwalk, Stamford, Danbury, Bridgeport and other urban areas.”

Knopp was one of the original mayors to sign onto the case; Mayor Harry Rilling is on the CCJEF steering committee but did not respond to a request for comment.

Many in Norwalk have decried the state’s Educational Cost Sharing (ECS) formula. Rilling has in the past stated that the lawsuit was Norwalk’s best chance to get more equitable educational funding from Connecticut.

Moukawsher, ruling from Hartford District Superior Court, orders the state to propose reforms consistent with the opinions rendered in his 90-page decision on the following subjects:

The plaintiffs, CCJEF, will then have 60 days to respond. A hearing will then be scheduled.

“The court will judge the state’s solutions, and if they meet the standards described in this decision, uphold them,” Moukawsher wrote.

“After so many disappointments in the state budget in past years, Norwalk education advocates can now have some hope that the remedy phase of the court action over the next 240 days will produce a fairer and more adequate formula,” Knopp said. “The new remedy must require that the true cost of educating students who grow up in poverty or who don’t speak English at home serve as the basis of a new formula that will send more state funding to our city and to other urban areas.”

“These proceedings have shown how school districts in Connecticut, particularly high-poverty school districts, have been getting short-changed. Today’s decision marks the first step toward ensuring all students have meaningful opportunities to become college- and career-ready,” said CCJEF President Herbert Rosenthal in a statement, suggesting that the decision has “potential ramifications in educational jurisprudence across the country.”

“Today’s decision is the culmination of an extensive trial that took place over six months and involved testimony from more than 50 witnesses. At the end of the day, CCJEF believes the evidence was overwhelming, and the court’s careful consideration of that evidence confirms it was,” continued Rosenthal.

“On a personal level, I’m overjoyed because the judgment today validates all of the work I have invested in this case over the past 12 years, first as mayor and then as a member of the Yale Law School clinical faculty,” Knopp said. “I’ll never forget the experience of listening to the judge in the courtroom today explaining why we proved our major constitutional claims.”

He continued, “But the case isn’t over, the work continues and I hope the next phase of working on the remedy will continue to have the backing of all political and educational leaders in Norwalk.”

“I view this as a good thing for Norwalk. Our city has been treated unfairly with ECS funding for years and it is now time for our state legislators to fix the problem,” Board of Education member Artie Kassimis said in a Thursday email.

Other BoE  members did not respond to a late Wednesday email from NancyOnNorwalk.

“Our only regret today is that CCJEF’s founder and long-time Project Director, Dr. Dianne Kaplan deVries, did not live long enough to see this day.  It was because of Dianne’s vision and tenacity that Connecticut public school children finally got their day in court,” said Rosenthal.

“Nothing here was done lightly or blindly,” Moukawsher wrote. “The court knows what its ruling means for many deeply ingrained practices, but it also has a marrow-deep understanding that if they are to succeed where they are most strained schools have to be about teaching children and nothing else. If they are to succeed rather than be overwhelmed by demands for alternative schools, public schools must keep their promises. So change must come. The state has to accept that the schools are its blessing and its burden, and if it cannot be wise, it must at least be sensible.”

“Now that the court has found that key elements of the existing education system are unconstitutional, it must begin the all-important task of constructing specific remedies to address the system’s inadequacies,” Finley said. “CCJEF looks forward to assist in moving that process forward quickly in order to fix Connecticut’s educational funding system and eliminate the achievement gaps.”

Maybe now the needs of all of CT will be addressed and not just those of the upper state. Norwalk, Stamford and surrounding towns have been slighted for way too long because it is believed I’m guessing that we are all rich. If you look at the current ECS formula you will see just how unfairly Fairfield Countly has been treated for far too long with maybe a few but minimal increases over the years not covering the actual needs. Maybe now those entrusted with giving all children a fair share will do their jobs properly. Kudos to those who initiated and followed through to this point. Now we wait to see the outcome.

No glory here for CT Democrats with their super-majority in Hartford kicking the “can” down the road for nearly 8 years. Those looking for more ECS funding for Norwalk are likely to be disappointed. Just compare per student outlays in our depressed cities with the rest of CT to see disparities. Higher local taxes may be the final outcome of this long drawn out effort for “fairness”. And Kudos to former Mayor Knopp for making a public service contribution after leaving office.

I’d like to extend my gratitude to former Mayor Alex Knopp and the CCJEF team. Instead of the cyclical political posturing about the ECS formula every two years when the state legislative seats are on the ballot, he took an action likely to yield real results and stuck to it for years until the job got done. Kudos!

Well done, former Mayor Knopp and your legal team! We are so grateful for your years of hard work on this ECS inequity.

I want to believe this will result in dramatically more equitable Educational Cost Sharing, but the specter of an appeal to the state Supreme Court looms. Could today’s decision be overturned?

Thank you to those that saw the lawsuit this far.

Lets hope
1- the state follows thru without needing further litigation
2- our local government takes the added income and reduces property taxes instead of finding ways to spend the windfall.

Thank you, Mayor Knopp! Alex put together a fantastic, dedicated team to win this victory for education. Let’s hope Governor Malloy directs his lawyers not to appeal but to meet the court ordered 180 day deadline to provide an honest plan for an education worthy of all CT kids ~ wealthy or not.