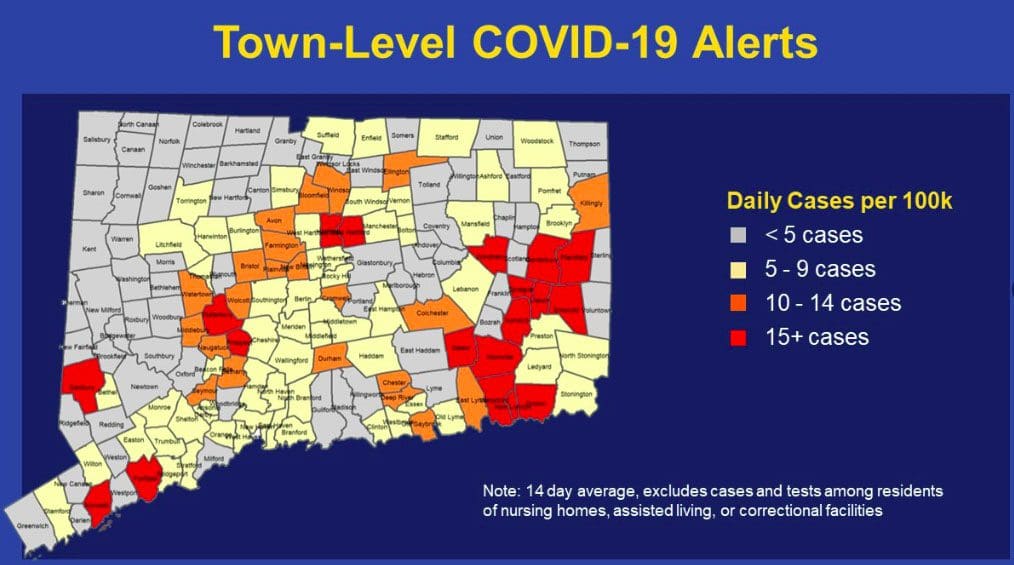 The novel coronavirus is spreading in Connecticut with COVID-19 cases increasing in the I-84 corridor from Hartford to Waterbury, staying high in smaller towns to the east and producing a stunning flare-up in Norwalk, state officials said Thursday.

Updated every Thursday, the state’s COVID alert map is ablaze in autumn colors — yellows, oranges and reds that show residents where the infection is active. Last week, much of the map was gray —signifying communities with fewer than 5 cases per 100,000 people.

Gov. Ned Lamont, his public-health adviser and other top aides described a spread that so far cannot be linked in a significant way to reopened schools and eased restrictions on commerce. The culprit is small interactions, not super-spreader events.

“Turning this around is within our own personal control,” said Dr. Deidre Gifford, the acting commissioner of public health.

The state is emphasizing the 3 Ws: Wearing a mask, washing hands and watching your distance from others. The daily rate of positive COVID tests was 2.3 percent of the 22,117 reported, a percentage point higher than a week ago. The seven-day rolling average was 2.1 percent.

There were two deaths in the state, bringing the total to 4,569.

Hospitalizations from COVID were up 19 to 232 on Thursday. That is three times the level of just a month ago but still only a small fraction of the 2,000 at the peak in the spring. Thirty-nine of those hospitalized with COVID were in intensive care. About one quarter of all hospital beds and half of ICU beds are available.

“Panic is not helpful in this kind of a situation, but action and well-informed strategic action is helpful, so I think we should all be concerned and then take the appropriate actions,” Gifford said.

Red-alert communities have the option of returning to Phase 2 of COVID restrictions, which limit indoor dining at restaurants to 50 percent of capacity and impose other limits on public venues. The state went to Phase 3 on Oct. 8, allowing 75 percent capacity at restaurants and the the limited reopening of theaters.

The Governor and Gifford said the paucity of cases traced to large public gatherings argues in favor of enforcing rules on wearing face covering and encouraging hand-washing and social distancing, which Lamont acknowledged will get more challenging as socializing goes indoors and the holidays approach. 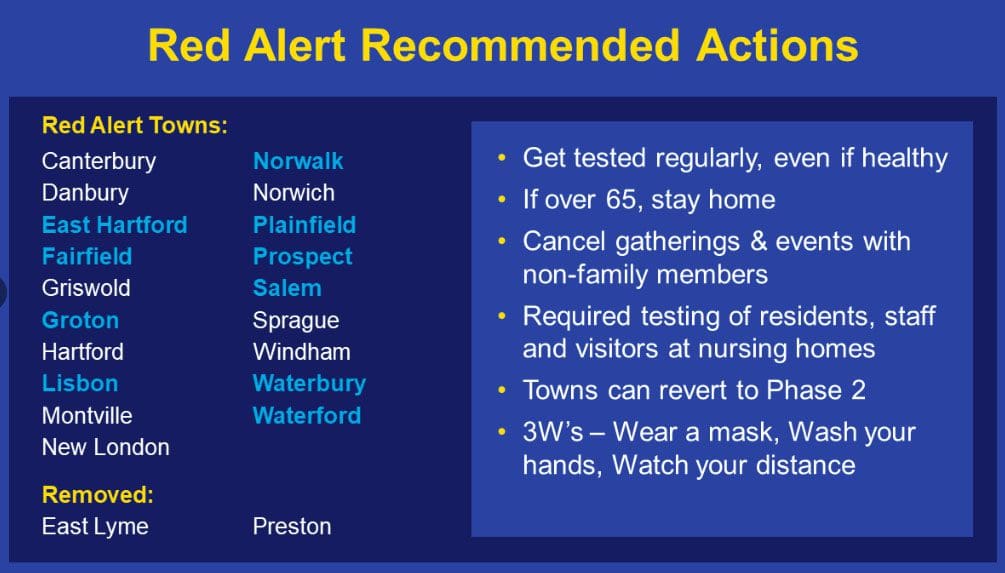 Lamont sounded like a parent telling a family that holiday plans would have to be changed, when they had hopes of a festive season.

“Here we go again. I know we’re now moving into the holiday season. We’ve got Halloween in about 10 days and Thanksgiving thereafter,” Lamont said.

Lamont urged residents to take a break from Thanksgiving dinners that can crowd three generations around dining tables that otherwise go unused for much of the year. He is reluctantly suspending another holiday at the Executive Residence, the distribution of candy.

“This year, for the first year, we’re not going to be able to do Halloween at the governor’s residence. We’re in Hartford, and it is in a red zone. And we do attract a crowd,” he said. “And I say that with great disappointment.”

Hartford was in the red zone last week and again Thursday. New on Thursday were Waterbury, Norwalk and Fairfield. Cases in Fairfield were largely traced to Fairfield University and Sacred Heart, but community spread among networks of friends and families were the major driver.

In Norwalk, the numbers were stunning: a jump of 72 to 163 active infections in just two weeks. The community has a testing positivity rate of 5 percent, more than double the state average. Gifford said the speed and reach of the flareup in Norwalk was the latest reminder that COVID-19 is extremely contagious.

Norwalk Public Schools has closed Silvermine Elementary on Friday. Students attending kindergarten through third grade are on full remote learning, while fourth and fifth graders will report to Jefferson Elementary School, as they have been doing, according to the NPS website.

Brien McMahon High School and the Center for Global Studies closed a week ago and will remain closed through Nov. 2. NPS Communications Director Brenda Wilcox Williams did not reply to an evening email asking how many COVID-19 cases NPS has now. There were 22 new cases reported Monday.

Mayor Harry Rilling, in his evening update, asked the public to help slow the virus down.

“This is a serious situation and we must remain vigilant. We will be meeting as a staff and speaking with surrounding communities about additional steps we can take to mitigate the spread of this virus,” Rilling said.

Lamont, who is 66, urged people to vote by absentee, an option available to every Connecticut voter due to the COVID this year. But the governor intends to cast his ballot in person, while wearing a mask and observing social-distancing protocols, at his local precinct in Greenwich.

He wants people to be safe, but he also wants them to feel secure in voting.

“That’s a message I wanted to send,” he said.

Rilling said, “I want to again remind residents to limit outings, avoid social gatherings, always wear face coverings, and wash their hands frequently. Those who can stay home should stay home, especially those who are considered high-risk. Now is not a time to be relaxed about what is happening.”

The COVID alert map on October 15.