NORWALK, Conn. — You could, through zoning regulation reform, encourage a research and development facility in Norden Place, bisecting the property’s current building with a road while not providing any parking for the residents of the new buildings you’re hoping to attract. Because they’ll be walking the parcel, getting most of what they need there and using public transit to go elsewhere.

On the other side of town, you could reform the Connecticut Avenue Walmart by filling its massive field of asphalt with buildings and trees. A “radical” transformation of the road would include an elongated roundabout where Richards Avenue meets Route One, to slow down traffic on the slimmed down street.

Between those part of Norwalk, you could use the Walk Bridge construction as an opportunity and punch a road through from Liberty Square to the wastewater treatment plant, because maybe it doesn’t need to be there and you could redevelop that land. And just down Washington Street, this might be a pie-in-the-sky idea, but wind turbines atop 50 Washington St. would be cool.

“Trust me, these things can happen even though it seems farfetched,” Brian Wright said Thursday as he laid out a vision of Norwalk developed through a public outreach that many felt had disappointing results in terms of the number of regular citizens involved. 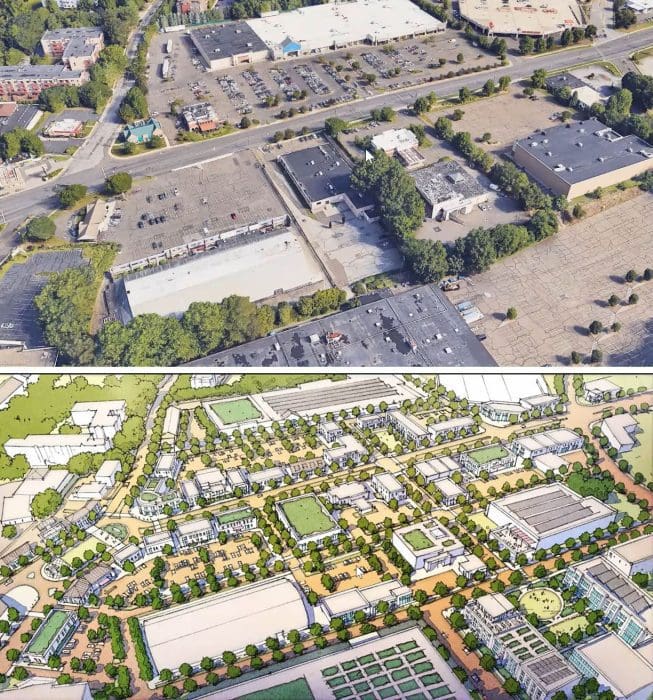 A before and possible after vision of the Walmart plaza on Connecticut Avenue.

Wright and other consultants with Town Planning & Urban Design Collaborative (TPUDC) shared the preliminary concepts with about 22 citizens in the “zoning charrette,” referred to by Wright as a Plan-a-Palooza. They’ll be transformed into new zoning regulations soon.

“The zoning regulations have not seen a complete overhaul in over thirty (30) years! This has resulted in piecemeal changes and has led to structural deficiencies and inconsistencies throughout the document,” the City states on a website dedicated to zoning reform. “The final result of this overhaul will be a document that is understandable and implementable, and that helps the community achieve the goals set forth in the Citywide Plan.”

Only about 100 people threw their reform ideas into the hat through a series of Zoom meetings. While that sounds awful in a city of 90,000 people, Wright said one of his team members used to work in San Diego and in a city of 1.3 million people, “the largest turnout they had for an event was 500 people, and that was over a 14-day period.”

“Statistically, you guys are doing a great job for San Diego’s standard, so I wouldn’t worry too much about it,” he said. “We’ve had good turnout from our perspective, just because we get to do this all over the country. And we tried every trick in the book.”

Wright explained “zoning 101,” describing zoning regulations as the “implementation arm” of a municipality’s master plan, grouping land into different areas or zones, and creating rules for those zones.

“It doesn’t cause anything to be built,” he said. “It just permits and limits what can what you can do in each zone.”

TPUDC recommends “zoning based on character rather than just separating uses,” Wright said. The new “hybrid” regs would be predominantly “form based,” with some areas pitched toward automobile usage and others “making land use decisions that are supporting walking, biking, and transit.”

“Most zoning ordinances are obsessed with an hyper-focus on separating one use from the next, and then don’t really worry about character in the built form and kind of what the results are of development in the future,” he said. “So while our character-based approach deals with that in a very nuanced and elegant way, we also still have uses as part of one of the things that we regulate.”

It would create greater diversity in housing and thus addressing affordable housing concerns, updating the accessory dwelling units (ADU) standards and “evaluating parking requirements to make sure we don’t have an excess of parking” given the desire to increase walkability and transit. 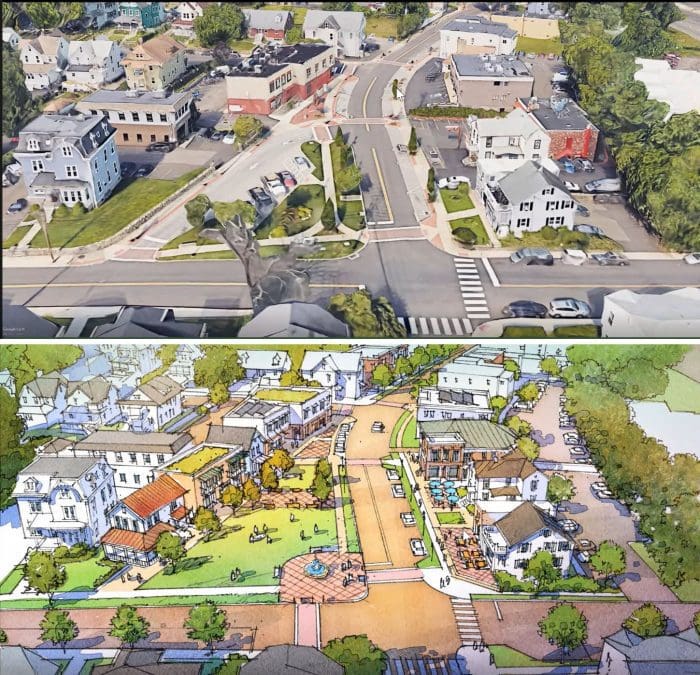 A before and possible after comparison for the Golden Hill area.

TPUDC looked at five focus areas, he said. Webster Street lot would be studied in more detail when a developer comes along, but you could punch a road through next to the movie theater, create civic spaces and encourage the walkability feel of the area.  A parking facility could have solar shade panels on top.

“And then we went full Monty here. So we got some wind turbines added to the tall building there and catch those high breezes. Again, you know, this is we’re dreaming big here. But just wanted to share that,” he said. “But the things to note are, you know, what are the building types that are appropriate? How have we dealt with parking?”

As for Norden Place, “What we wanted to try to do was to show you how you might break this down, to do some really interesting things. And what people are looking for these days in the knowledge economy is the idea of more of a campus ‘a place’-kind of experience,” Wright said. “…If you really want to get in your R&D and have, you know, smart people making smart things and thinking smart thoughts and all of that, you have to kind of do it a little differently.”

Civic spaces would be built into that complex as well, a place where people can work and live, with businesses to serve them, he said.

On to another area.

The Walmart could be transformed with buildings along Connecticut Avenue, and parking behind them, he said. The roundabout “would be a feat, but we want to just show you.”  There might be a hotel in the complex, or a car dealership. Not to mention the “gas backwards,” a reimagined gas station with the pumps hidden from the road.

All of the ideas featured green roofs and solar collectors; in the Darien line case, the BLM building could support an urban farm on top, he said. So could Walmart.

The goal of the presentation was to get feedback, asking participants if “you feel like this really is still representing Norwalk, or we just superimposed something from outer space and popped it on here,” he said.

“I actually liked a lot of what I saw tonight,” said Scott Goodwin, an independent candidate for District C Common Council. “So you know, hats off to you.”

He thought the Walmart plan would inspire “a group with pitchforks” to go to Tennessee and investigate the inspiration for the concept. While he planned to email ideas to Planning and Zoning Director Steven Kleppin, Goodwin advised the consultants to consider the special permit process because they’re like “the pin in the balloon,” the “tip of the spear” and, “I do feel like right now the the process favors developers over resident. And and it creates a lot of issues where we look at it and say, How did that happen? And then it’s like, ‘oh, special permit.’”

Tanner Thompson said he really appreciated the mixed-use concept for Norden Place; Wright said he was “really optimistic” about it being a “really cool, unique mixed use innovation district.”

Diane Lauricella said she was pleased to see all the green roofs and solar panels. She asked if the city could mount a public outreach next week so people could weigh in before work begins to turn the drafted concepts into drafted zoning regulations.

“I believe this that this is a once-in-a-lifetime opportunity for many of us who are boomers, especially to help the city do a holistic rewrite of the zoning regs,” she said. “And if you could portray it in that way, because we always hear some folks complaining, but let’s get them to offer their suggestions.”

Wright said the discussion leading up to the drafted concepts was great and very thorough. “They’re still up online. So people can go online and add, kind of go through this.”

It is very received by me that the
greener, the better. BTW, wind turbans are huge and make a constant loud throbbing hum. Consider that if a quiet shopping experience is to be promoted.

It doesn’t matter if apartment complexes are massive or spread out in smaller buildings the issue is if you Keep packing more people on top of each other the quality of life will diminish from traffic parking to schools and public services….. That’s the reality you can hide the gas pumps but you won’t be able to hide the people. You have to like the architect rendition of Liberty square. There’s a forest on the other side of the RR tracks where did the wastewater treatment plant go??? Lol

Why does Norwalk keep pushing the false idea that more people in town does not mean more cars and traffic?

It’s all BS. Norwalk isn’t SanDiego, it isn’t Stamford, it’s just a small-town that identifies as a big city. I’ve lived here most of my life and this town is being run into the ground in the name of ,”progress” town “leaders” whore out land and perks to the highest bidders! All the while surrounding towns say don’t build that box store here, build it in Norwalk and boom, there it is. It’s going to be a bankrupt commuter town. Attract business everything else will follow. It’s simple really. People need to work.

Norwalk is the third most densely packed city in the state. Take it to Darien.

@PDboy. Glad you noticed. This is how they pitch these things to the city council and committee members. And the dupes buy it every time. If you go back and look at the projects they are building on Water St, they were sold in with drawings that showed riverfront esplanades . I’m not against development, but you don’t have to be an idiot about and try to claim with a straight face that these projects improve conservation and traffic.

I honestly don’t think that they should re invent the wheel . I think they should leave our town how it is. I’d like to see the walk bridge in south Norwalk replaced and the Money go toward Fixing our bridges and roads.