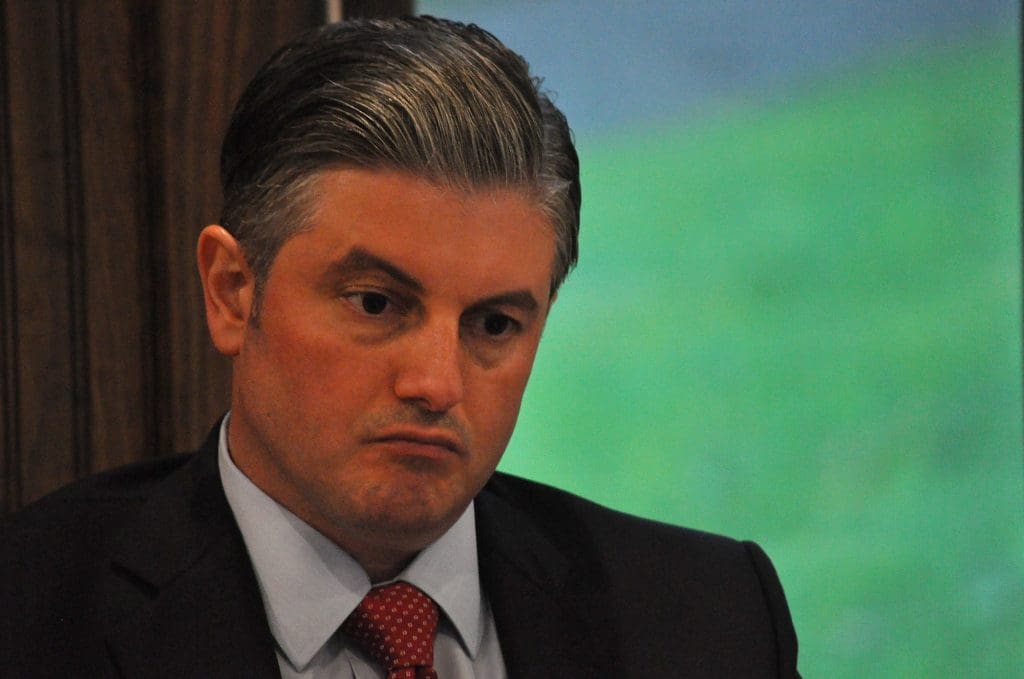 NORWALK, Conn. — In a lawsuit, Frank Costanzo, formerly a high-level NPS administrator, has laid out an alleged pattern of workplace discrimination by Norwalk Superintendent of Schools Alexandra Estrella as he seeks damages for being forced to leave his job.

Costanzo has a hereditary kidney disease. According to his suit in federal court, when he revealed this to Estrella she not only didn’t show much sympathy but instead mocked him and attempted to humiliate him.

Estrella required all administrators to work in person during the pandemic even though some had health vulnerabilities that intensified COVID-19 fears, the lawsuit alleges. Although she invited administrators to seek remote working accommodations, she informed the Chief Talent Officer that no requests would be approved, according to the complaint.

One cabinet member submitted “medical documentation of her comorbidity in the hope of working remotely until vaccinations became available, but Estrella ignored the request,” Costanzo’s complaint alleges. The employee’s position was eliminated in the Board of Education budget proposal for 2021-2022.

The complaint was filed in April and amended in June. It accuses Norwalk Public Schools of violating Connecticut Fair Employment Practices, violating the Americans with Disabilities Act and breach of the Implied Covenant of Good Faith and Fair Dealing.

NPS, in a reply filed in June, denies most of the allegations. The allegation about the other cabinet member is not denied but Costanzo is “left to his proof,” a common legal phrase.

Niccolo Dua, NPS Director of Communications and Marketing, did not reply to an email giving the district a chance to comment on the lawsuit.

Then-Norwalk Superintendent of Schools Steven Adamowski recruited Costanzo to be Chief of School Operations in 2015, a position he held until June 30, 2021, the complaint explains. In that time, “the overall NPS student achievement ranking rose from sixth to first in its District Reference Group, making it the top performing urban school district in Connecticut.”

Costanzo’s complaint focuses on his physical liabilities – chiefly, a need to urinate at least once an hour – and omits his controversial tenure under Adamowski.

Costanzo appeared to serve as Adamowski’s hatchet man, building a case against administrators then-Board of Education members wanted on the chopping block. Behind the scenes it was rumored that Costanzo had to take the job because he had been accused of sexual harassment in New Haven. Forced to do what Adamowski told him to, Costanzo took the heat over controversial issues such as high school start times and lunch debt. Adamowski denied that Costanzo had been desperate for a job.

Then-Briggs High School Principal Marie Allen “immediately felt a change in culture” when Costanzo came aboard, she said in a lawsuit alleging discrimination. She felt targeted by Costanzo and was demoted to Brien McMahon High School Assistant Principal. The parties settled the case in September; no further details are currently available.

Adamowski and Costanzo were accused of harassment, hyper-scrutiny, and retaliation in a lawsuit filed by former West Rocks Middle School Principal Lynne Moore last year, stemming from her demotion in July 2018, when she was transferred to Norwalk High School as an assistant principal. The lawsuit was settled in January.

Eleven months later, Estrella demoted Costanzo, cut his salary by $100,000 and then made Moore his supervisor, the lawsuit states. Costanzo was stationed at a secretary’s desk outside Moore’s office for six weeks though there was available office space, a move intended “to humiliate him and make him feel uncomfortable.”

Costanzo revealed his autosomal dominant polycystic kidney disease (PKD) to Estrella shortly after she became Norwalk Superintendent because he felt he was at grave risk from COVID-19, the complaint states. He shared details such as his protein-restricted diet, the enlargement of his kidneys and the proliferation of cysts, and that his “declining kidney function placed him in the stage 3 kidney disease category.” He had been prescribed medication to slow the disease’s progress but this made him need to use the restroom every 45 minutes to 1 hour.

Estrella listened intently but never asked if he needed accommodations and he feared asking because she had made it clear that she expected Chiefs to work full-time, in person.

Constanzo’s complaint alleged that discriminatory and retaliatory quickly ensued, and in August 2020 he was treated “as if he had violated a policy” when he spoke to a Hearst Media reporter, a routine part of his job under Adamowski.

In January 2021, Costanzo, who had received exemplary performance reviews under Adamowski, “began receiving ‘coaching and support’ from Dr. Sandra Kase, at Estrella’s behest,” the complaint states.

As the year continued, Estrella “grew more irritated” when Costanzo left meetings to use the restroom, disconnecting him from Zoom calls and haranguing him if he forgot to turn off the camera, although other administrators did this without reprimand, the complaint states.

The hyperscrutiny continued and Estrella demanded that Costanzo use her restroom, and although it made him uncomfortable he did it for months, attempting to keep his job. He protested the arrangement multiple times and eventually told her he wouldn’t do it.

“Throughout 2021, Estrella would often see Costanzo walking to the men’s restroom when she would be conversing with an employee in the hallway,” the complaint states. “On these occasions she would make it a point to comment derisively: ‘going to el baño?’”

Once she emailed him during a cabinet meeting to let him know about a superintendent opening in another school system, according to the complaint. He ignored it as the discussion continued on another topic, but she brought it up, asking in front of everyone if he would be applying.

In March 2021, Costanzo’s job title was changed but he wasn’t told of any change in duties, the complaint states. “After hundreds of texts between Estrella and Costanzo over the course of the year, she stopped texting with him, as an individual recipient, on April 1, 2021.” Kase also stopped texting him. He was subsequently notified by email, while home sick due to being vaccinated, that his position might be changed or eliminated as part of Estrella’s coming reorganization.  His contract would not be renewed.

On April 19, 2021, Estrella told him, “Your vision doesn’t align with my vision for the work going forward and your relationships with the unions is not good,” the complaint states.

She had never expressed those thoughts before, the complaint states.  “Costanzo’s relationship with administrators and teachers, particularly principals who he worked most closely with since 2015, had been strong.” He was immediately relieved of his oversight of Human Resources.

He was told in May 2021 that his new position would fall below the rank of assistant principal and his salary was being halved. His $100,000 salary was less than the average 10-month Norwalk teacher salary.

When he was placed under Moore, her lawsuit was active and he was a named defendant, the lawsuit states.

“Moore, working with Estrella and Kase, excluded Costanzo from participating in an 11-day summer administrator professional development series that was focused on instructional leadership and equity. Instead, he was handed the PD binder after the training by Moore and was told to read it,” the lawsuit states. “Estrella, Kase and Moore prevented Costanzo from fulfilling the essential functions outlined in the new job description.”

That September, Costanzo asked Norwalk High School Principal Reginald Roberts for a different supervisor, providing Yale Nephrology documents explaining that high blood pressure would worsen his condition, according to the complaint. Roberts indicated interest but days later reprimanded Costanzo, “the first and only reprimand Costanzo had ever received for ‘insubordination’ in his career.”

In January, he submitted “notification of his involuntary resignation,” the complaint states.

He went to work for Teach For America as the Senior Managing Director of Programs and Innovation for the region, Connecticut TFA stated in a press release.

NPS also asserts affirmative defenses. Cornell Law School describes these as defenses “in which the defendant introduces evidence, which, if found to be credible, will negate criminal liability or civil liability, even if it is proven that the defendant committed the alleged acts.”

Among other things, Costanzo’s complaint is untimely and he failed to exhaust his administrative remedies, Attorney Johanna Zelman argues on behalf of NPS. The school district is immune from punitive damages and a “mixed motive” defense might be applicable.

It is obvious that Dr Estrella was absent when sensitivity training was administered. She has been nothing short of a bully by portraying her “My way or the highway” attitude. Clearly, she needs to go. She is costing us hundreds of thousands in lawsuits in her short tenure here. Reportedly, this one could reach 7 figures when all done! Next time she needs a poddy break we should make her hold it to see how it makes her feel. $300,000 for a prima donna from NYC. When will we realize that we should promote one of our own who knows the city, families, and diversity of Norwalk. Kudos to Nancy for printing this article. Hard to believe we treat our employees like this.

Sounds like the schools are run worse than the mafia🥵👎🏽😂🇮🇹🙈💩

WOW! What an amazing working environment under Estrella. I’m sure this lawsuit is one of many more that will be coming out! Welcome to the NPS Dictatorship.

another settlement. take a number

He was treated horribly under Estrella. When she did this all of us involved in the BOE and politics were in a state of shock on what she did to him.

So she forced him to go to work during Covid but forced the kids to stay home during Covid. Got it.

Why don’t we use all this NPS legal talent to teach our students to be lawyers?
How do we get rid of (forbid) these no disclosure settlements?
HOW DO WE FIND OUT HOW MUCH OF OUR MONEY HAS BEEN PAID OUT TO SETTLE CLAIMS AGAINST OUR EMPLOYEES?
How can we demand no more settlements for convenience and let these cases play out to inform us who is at fault?
Are there this many “settlements” in private industry and if not, why not?
Suing our local institutions has become our very own local lottery path to riches!!!! One way or another we are paying for this, either directly or via higher insurance rates.

Just another victim of Estrella’s nonsense. When will the BOE admit she is a tyrant? Get her out. More people at City Hall now from NYC than actually from Norwalk!

I certainly hope the BOE and Norwalk are reading. Dr. Estrella’s caused two lawsuits within 2 years, Chumney and Costanzo, and settled 2 more: Dr. Allen (made to resign) and Dr. Moore (replaced Mr. Roberts). She’s forced out 6 principals: P-TECH, McMahon, Tracey (twice), Silverman, Norwalk High (much-appreciated Roberts was not “promoted”). On a Supt. 101 note, Estrella couldn’t issue a genuine apology for a bad snow day call, endangering our kids’ lives, and on a big issue, she’s attempting to re-district middle schools, thinking we’re clueless enough not to notice. What of the numerous resignations of good people? At least 4 HR personnel including two Chiefs, the head of communications (Wilcox Williams), the head of math and science (Henkel), the head of ELA (Goss), the head of finance (Hamilton), and the influx of NYC staff in central office. Teachers are sick of her and administrators live in fear from what I’m told. Wake up, Norwalk.

Nancy always manages to find the best pictures. Hope Frank is well. It did not have to be this way. But alas, this seems like the new way.