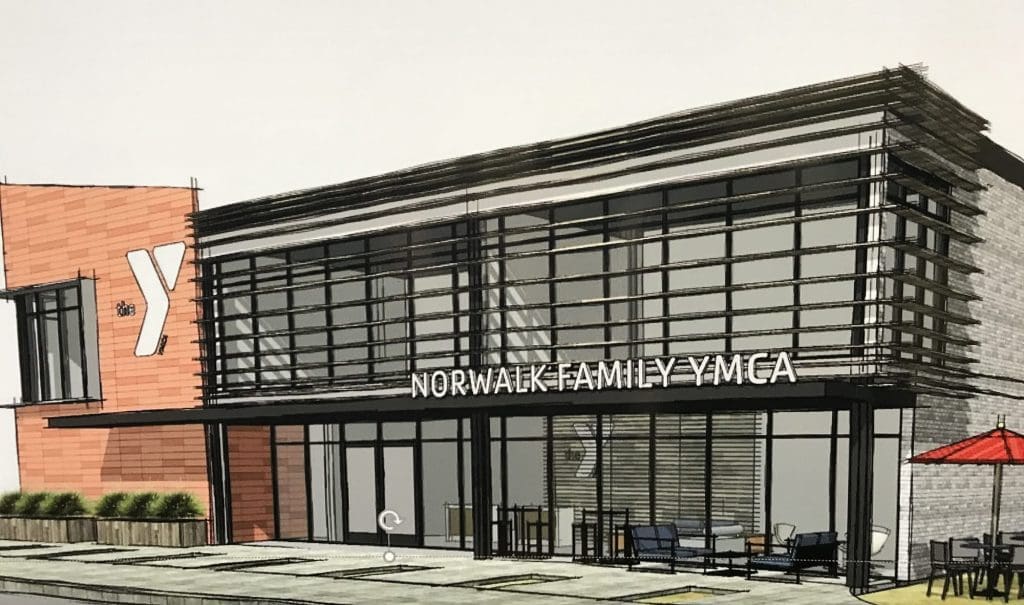 A rendering of the proposed YMCA community center at 98 South Main St. It’s hoped that construction will be complete in three years.

NORWALK, Conn. – Some Common Council news for you:

The Common Council on Tuesday approved a $1 million special appropriation to fund expected changes at 98 South Main St., the former NEON building, that would create a state-of-the-art community center.

This plan was first announced in October. The Riverbrook Regional YMCA was the sole respondent to a Request for Proposals for the dilapidated building. Since October, the Council has worked to formalize the agreement, Finance Committee Chairman Greg Burnett (D-At Large) said Tuesday.
Tuesday’s meeting also saw the approval of a term sheet spelling out a 30-year lease for the building. The YMCA would pay $1 a year plus cover any repairs or maintenance needs, after the initial renovation.

The building has sat underused since the demise of Norwalk Economic Opportunity Now (NEON) in 2014, a bankruptcy that took years to unravel. In August 2018, the Common Council voted to buy the South Norwalk Community Center’s half of the building, gaining control of the entire property. The City then put out its RFP.

Renovations are expected to total up to $5 million and “I have no doubt that we’re going to be able to help fund this,” Riverbrook Regional YMCA CEO Bob McDowell said in October.

The $1 million comes from money collected from GGP as part of the approval of The SoNo Collection. State funds are also expected to be in the renovation mix.

The Y has engaged memorandums of understanding with the Norwalk Housing Authority and with AmeriCares for use of the building, McDowell said Tuesday. AmeriCares will be expanding its space.

“We’re very excited about that because you know, they support this community with about 3500 healthcare visits to uninsured people from that community each year. We think that is vital,” McDowell said.

The Housing Authority will fit out learning centers and “we’ll see almost 110 children each day that facility and then we’ll have a lot of YMCA programs,” he said.

“We are elated by the family and children services that will be offered to the community, and once again having the doors of the YMCA open here in Norwalk,” McDowell said.

“Please dig into your pockets because we like to see not them not just see them open but also continue,” Kydes said. “… A lot of people are excited about this and we need to have it be prosperous and work for our community, not just in South Norwalk but all of Norwalk.”

“That building has remained relatively vacant for too long,” Mayor Harry Rilling said. “It’s a wonderful asset for the city, and it’s a place that now is going to be a place for people in the city of Norwalk to go and get various programs, various training, various services.”

Riverbrook Regional YMCA has until Dec. 31 to raise the money to fund the renovations, the lease term sheet states. Design work must have begun at that point and be done by Dec. 31, 2021. The deadline for construction completion is Dec. 31, 2023.

William Ford, former tax assessor for Worcester, Mass., was approved by the Council as the new Norwalk assessor, Tuesday in City Hall. 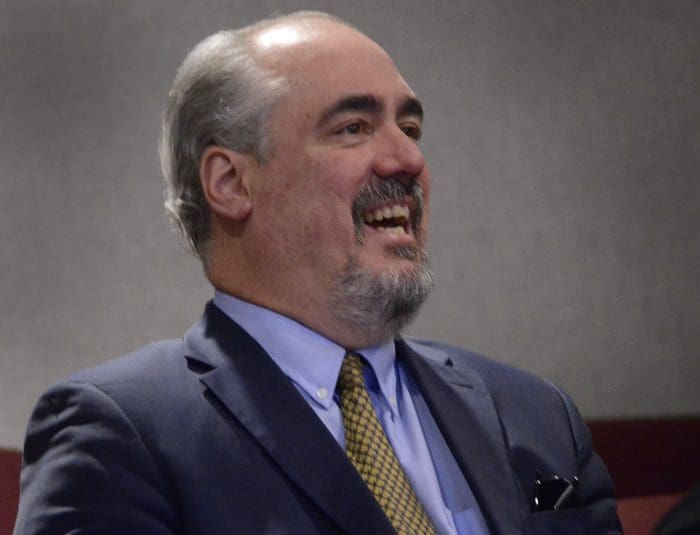 Ford has more than 20 years of municipal experience and has been City Assessor for Worcester, Mass., since 2009, according to his resume. Worcester is “an established community with a population of 180,000 people with assessed valuation of over $17 Billion that consists of approximately 48,000 real estate parcels, 5,000 personal property and 140,000 excise accounts,” it states.

He was hired for a four-year term and will be paid $145,704 a year, according to Norwalk Communications Manager Josh Morgan.

In public speaking, Lisa Brinton presented some of her Mayoral campaign talking points under the guise of welcoming Ford to Norwalk. Ford needs to be aware of “our multi-unit housing and assessment problem that’s going on unchecked for far too long,” she asserted.

Ford is experienced with multi-unit housing assessments as census figures indicate that only 42 percent of Worcester housing is owner occupied, she said.

“My hope is that, Mr. Ford, you will bring better assessment practices to our new complex rental situation because smart sustainable growth is needed to keep up with our city wages, currently outpacing local household income, while not chasing homeowners away,” said Brinton, who has run for Mayor in the last two elections.

Ford began work one week ahead of his Council approval as a “provisional employee,” according to Morgan.

He spoke to the Democratic caucus before the Council meeting began and made no public remarks. He replaces former Norwalk Tax Assessor Michael Stewart, who left in August. A deputy tax assessor is also needed.

Norwalk made it through this period with the help of Westport Tax Assessor Paul Friia, who will sign the grand list when it’s submitted to the State at the end of the month, according to Corporation Counsel Mario Coppola.

“Mr. Friia was really instrumental in us continuing to have our Tax Assessor’s Office function effectively for the past four months,” Coppola said. “It’s been a Godsend to us and we thank him as well as First Selectman Jim Marpe for allowing us to use him on a part time basis for the last four months.”

On Wednesday, the Council Land Use and Building Management Committee is set to discuss acquiring 2.7 acres in South Norwalk because, as was previously reported, it’s thought that this is the best way to get the construction of a new Columbus Magnet School underway.

The behind is basically designed to be built on parkland, Building and Facilities Manager Alan Lo explained to Board of Education Facilities Committee members Wednesday.

The use of a sliver of Springwood Ely Park requires state and federal approval of Norwalk’s proposed land swap with a larger swath of land behind Norwalk Community College. That approval has not been forthcoming.

“I think that the strategy is to get away from that and start looking for other property because we waited too long, and also that DEEP (Connecticut Department of Energy and Environmental Protection) is still prefer(ing) property within South Norwalk,” Lo said.

Council members will discuss this in executive session.

Norwalk already acquired 4 and 10 Tito Court for use in the new school project behind the Nathaniel Ely Center. The parcels total .93 acre and Lo said they had cost about $1.2 million.

“We’re looking at like, possibly, you know, 2.5 acres of property,” he said. So, again, I don’t want to go too much into it, but it takes additional money from the city, from the taxpayers to accomplish the goal.”

Meanwhile, construction costs go up about 3 percent a year, he said. It’s been a two year delay on a $42 million project, so “that’s $2-3 million just by escalation.”

“I think this is a really great learning opportunity for us,” Board of Education member Barbara Meyer-Mitchell said. “We when we work from a scarcity mindset and we say ‘we can’t buy property adjacent, we have to use what we already have,’ – we’ve actually, we’re going to spend more in the end because we waited.”

Rilling in 2015 instructed then-BoE Facilities Committee Chairman Mike Barbis to figure out how to build new schools on city property.

Lo said the Council will consider land in the immediate vicinity.

“I just wanted to reiterate that school playgrounds are for everybody to play on when school is not in session,” Board of Education Chairwoman Sarah LeMiuex said. “And the playground and the facilities the outside grounds of this for available for community.”