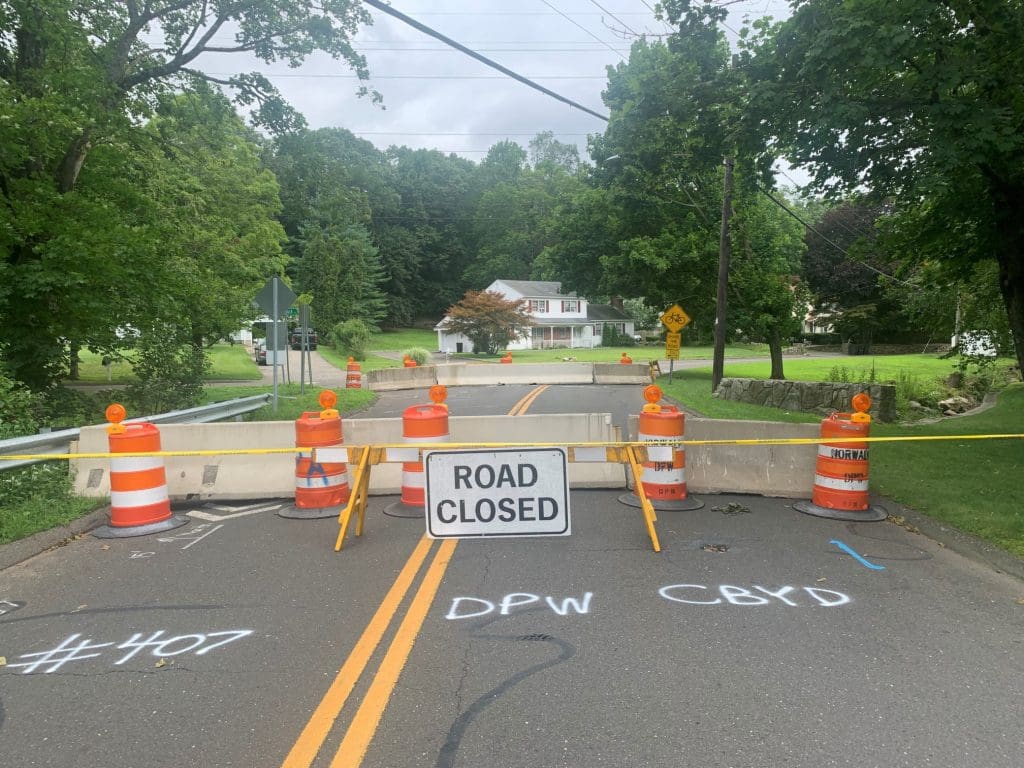 The detour near the intersection of Rowayton Avenue and Woodchuck Lane. (File photo)

NORWALK, Conn. — Here’s a round up from Tuesday’s busy Common Council meeting:

Rowayton Avenue was closed in July when the road cracked after a heavy storm due to a culvert washing away part of the understructure of a bridge over Keelers Brook. Now, not only will the repair work be expedited through the purchase of a $244,130 pre-cast box culvert, but the overall cost will be 20% less because the City is cutting out the middle man, Norwalk Chief of Operations and Public Works Anthony Robert Carr said at Tuesday’s Council meeting.

“It will definitely save at least 45 to 60 days for the project duration, if we go into contract and issue a purchase order to the manufacturer” instead of going out to a public bid, Carr said.

The Council unanimously greenlighted the purchase of the culvert from United Concrete Products Inc.

Freeman Companies, which has an open contract with the City for design of small bridges that need rehabilitation, is about 80% done with the design plans for the culvert and will submit the plans to United Concrete, Carr said. United Concrete will generate drawings and get DPW approval before producing the culvert. This should take two to 2.5 months.

“We understand the residents of the area have been impacted enough and in our opinion for too long, but with winter coming now this gives us the perfect time to prep the site, get the contractor on board, have the have the culvert, go into production,” Carr said. “And then we intend to complete the project by optimistically March of 2022, but realistically, April.”

Crowdsourced loans would help Norwalk businesses in a move initiated by the Economic and Community Development department.

“We approached the National League of Cities… they have a list of programs that support different types of entrepreneurs and businesses, especially those that are women owned and minority owned. The one that fit best for us was the Kiva program,” Director of Business Development & Tourism Sabrina Church said Tuesday to the Common Council.

The Council unanimously approved a three-year partnership with Kiva and the National League of Cities for a small business and entrepreneurship loan program, including a

contracted staff position, for an amount not to exceed $245,000.

“I think this is one of the first expenditures of ARPA (American Rescue Plan Act) money, or better known to the public as COVID relief funding. And I think it’s a great initiative,” said Economic & Community Development Committee Chairman John Kydes (D-District C).

“The Kiva program is a crowdsource funded loan program. So how it works is somebody can put in $25, and then they become a lender. So essentially, that $25 can then be put towards any campaign that they want to support. The campaigns usually take about 15 days to be fully funded on the platform, any business can get up to $15,000 in loan funds,” Church said.

Citizens can lend as little as $25 to help a business they select themselves.

“These are things that could range from you know, a limo service buying an additional vehicle, a catering business buying to more traditional equipment, things of that nature that a bank would normally scoff at or not want to support,” Church said. “…Everyone who I’ve spoken to has great reviews of the program.”

The City is set to spend about $7.15 million on work to end the flooding that has besieged the Dreamy Hollow area for years.

“This is a project that has been a long time coming, one of the biggest projects that the City has taken on in decades,” Public Works Committee Chairwoman Barbara Smyth (D-At Large) said at Tuesday’s Council meeting.

The flooding problems go back to the 1980s and “this project was on the shelf and discussed probably at least three directors ago,” said Norwalk Chief of Operations and Public Works Anthony Robert Carr. Meaning, it dates back to when Dominic DiGangi led the Department of Public Works.

Carr said he got emails from an area resident shortly after he began work here in March 2019.

“I did come here with funding expertise, and I know that these are heavy lifts but they’re not necessarily impossible,” Carr said. “So, without knowing the full history…(we) put our heads together, and basically commissioned a flood study in, I believe it was September of 2019 for Dreamy Hollow.”

There are 60 homes in the area, he said.

Of the $7.1 million, about $6 million is for drainage and $1.1 million is for sanitary sewer improvements, he said. This will “mitigate the flooding up to the 25-year storm event,” which refers to a storm that as a 4% chance of occurring in any given year.

“This was a project that’s been shelved, and basically said that there was no way to improve that area,” Carr said. “We did not believe that I certainly didn’t. But we were able to find the balance between what was cost feasible, what was cost prohibitive, and what would be a, we felt, inadequate benefit to the public.”

Keegan moved to table the vote. Since the next Council meeting would have been Dec. 28, during the holiday season, this would have moved the vote to January. And the regularly scheduled meeting is Jan. 11.

“I think it’s something that we should discuss, not only with leadership, but amongst the Council members, especially maybe my colleagues who are new to the council,” Keegan said.

Keegan, the only Republican Council member, was the only one to vote in favor of tabling, though Council member Diana Révolus (D-District B) expressed sympathy.

“I agree we should have more information,” she said.

Council President Tom Livingston (D-District E), who spearheaded the move to merge the Commissions, said that the nine regular members of the new body will be the veterans from the former Commissions.

The regular members are:

From the Planning Commission

From the Zoning Commission

The veterans are “all very experienced in both planning and zoning,” Livingston said. “They also reflect all districts and backgrounds throughout the city, we have at least two members of every district. And I think it’s critical that we ensure the needed continuity and expertise that these nine members bring to this new commission. They have the experience they’ve been through zoning matters and planning matters in the past.”

“I voted to move this committee forward, because I think it is critical and important, as Mr. Livingston indicated,” Council member Darlene Young (D-District B) said. “But I also understand Keegan’s perspective on this. … We knew that this had to be moved forward quickly, and there had been a lot of planning behind it.”

Can anyone tell me who was responsible for to execute the Mayor’s pledge in 2014 to tighten zoning regulations after 2014 Mosque debacle on Fillow Street?
What were the results?? Someone reading this must know the answer.

I would like to speak before the Common Council on January 11.