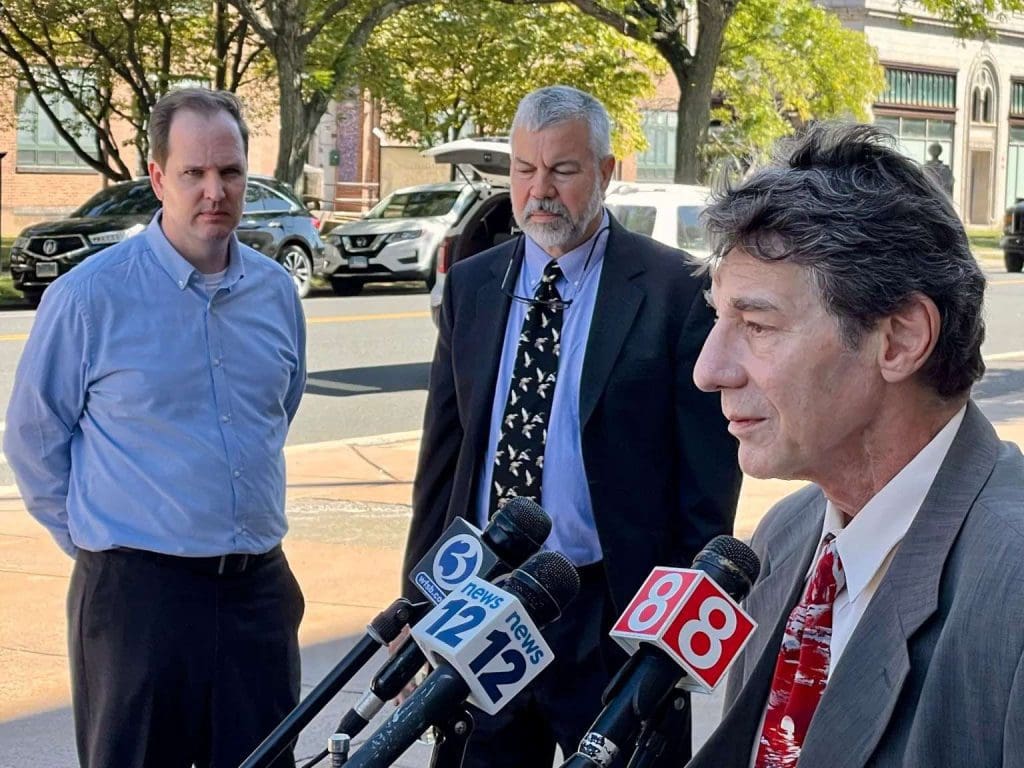 A Hartford Superior Court judge ruled Thursday against Republican gubernatorial candidate Bob Stefanowski in his effort to block the Independent Party of Connecticut from running a candidate for governor.

Stefanowski had complained that the party’s chair, Michael Telesca, violated bylaws in breaking a tie at a caucus that gave the nomination to a party member, Rob Hotaling, and denied Stefanowski a cross endorsement and second ballot line.

The lawsuit asked the court to issue an injunction that would have required the secretary of the state to strike Hotaling and his running mate, Chip Beckett, from the ballot, but not give the line to Stefanowski.

In a 29-page decision, Judge Cesar A. Noble noted that state law gives broad discretion to minor parties in how they endorse candidates, as opposed to the prescriptive rules for major parties.

“No similar mandate appears in the statutes governing minor parties,” Noble wrote. “Had the legislature desired to impose a mandate that minor parties must follow their rules, it clearly knew how to do so, but did not.”

Stefanowski said he will not appeal.

“The court’s ruling today, that minor party chairmen can choose to effectively ignore their own by-laws in order to achieve a desired political result, is certainly disappointing,” Stefanowski said. “I urge the legislature to consider a remedy to address this issue in the future.”

Hotaling called the decision a win for political choice.

“I am pleased that the judge has ruled in our favor,” Hotaling said. “The decision is good not only for our campaign but also for our democratic process. I have said before that when the voters have more choices, it is good for democracy. Bob may feel differently, but I would ask him: in what area of commerce or industry are fewer choices better?”

“I am absolutely delighted that we have our own candidates, Rob Hotaling and Chip Beckett at the top of the ticket. We also have over 100 lines statewide that are a mixture of our own candidates as well as, moderate Democrats and Republicans.  We need to bring public policy debate in Connecticut back to the center,” said Brinton, who announced this week that she is challenging State Senate Majority Leader Bob Duff (D-25) in this election.

Voting at the Independent’s caucus last month ended in a 79-79 tie, with Telesca then declaring Hotaling the winner on the grounds the deadlock produced a vacancy that could be filled by the party’s state central committee, which already had endorsed Hotaling.

Under the party rules, a nomination requires winning 51% of the vote.

With three candidates vying for the endorsement, the caucus employed ranked-choice voting by paper ballots, producing an initial vote of 79 for Stefanowski, 75 for Hotaling and four for Ernestine Holloway.

All four of Holloway’s supporters named Hotaling as their second choice, producing the 79-79 tie.

Noble wrote the bylaws did not call for ranked-choice voting and while the actions of the party were “plausibly not in conformance with its Bylaws, they were not irrational.”

“As the defendants argued, the Bylaws contain no specific provision for breaking a tie, thus, while the IPC might plausibly have reached a contrary conclusion, its decision to nominate Hotaling and Beckett is within its discretion,” he wrote.

Neither Stefanowski’s lawyers nor his campaign offered evidence or analysis at a one-day evidentiary hearing last week about the degree to which a vote for Hotaling could be one less vote for Stefanowski.

The lawsuit filed on behalf of the GOP ticket of Stefanowski and Laura Devlin, plus three members of the Independent Party, simply states that they will be “irreparably harmed” if the court does not enforce the bylaws.

Stefanowski and his campaign manager, Patrick Sasser, were listed as witnesses, but the candidate’s lawyers rested their case without calling them. Neither was in attendance.

Gov. Ned Lamont will be on three ballot lines in November. The Democrat was cross endorsed by the Working Families Party and the Griebel-Frank for CT Party.

Lisa Brinton cast a vote for Hotaling, which can also be viewed as the decisive vote.

Tell me again how she is secretly a republican in designer duds.

Hey Bob – try to win with your policies, not bully tactics and culture wars.

Lather, Rinse, Repeat. Not one story on how the opposition party has nothing to campaign on except for division and distorting the viability clause of existing abortion laws that they themselves passed, but think you are too stupid to understand. Let’s make it about the evil Rs.

According to facts as reported, the chairman ruled that the nomination tie vote (which existed after ranked choice vote allocation) could be broken by the state central committee of the Independent Party. Obviously I don’t know what rules of procedure, like Roberts Rules, etc. were adopted, if any. However, generally, any ruling of the chairman may be appealed to the group as a whole by any voting member. If that were done, the voting members then present could have over-ruled the chair by a simple majority vote. When such an appeal fails, or is not made, the ruling of the chair is confirmed.
This is also a useful procedural rule to know in case a group has several motions and amendments that have been offered, and the chairman or the body is confused as to which one is to be voted on first. The chairman makes a ruling and anyone not agreeing can appeal to the body as a whole. That will allow the body to vote and resolve the matter.

First Voters need to show up at the ballots!
Seems two party is basically the same bs for years… we need more options. But that also seems to split anti democrats votes. If that makes sense. It’s why I can appreciate the Republican candidate, bob’s need to have just him and Lamont on the ballot. I think, registered voters need to SHOW UP not just a minor percentage voting.