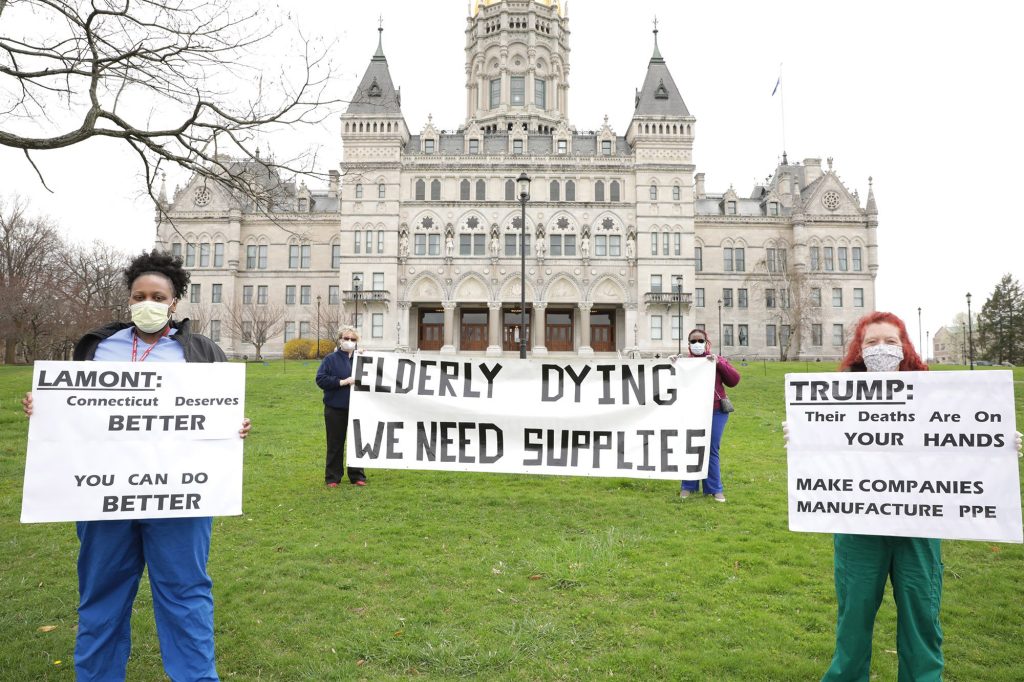 Nursing home workers visit the State Capitol to call for a better federal and state response to the COVID outbreak. (Courtesy of SEIU 1199)

This means fatalities of nursing home residents now represent 50% of all COVID-19-related deaths in Connecticut.

The new report ends a week of intense speculation among state officials and health care professionals, some of whom questioned whether earlier state assessments grossly underestimated the pandemic’s spread among the state’s nursing homes.

Gov. Ned Lamont said during his press conference Friday afternoon he is confident the nursing homes are getting the protective equipment they need to slow the spread of the disease.

“I think we’re doing well on that compared to what I’ve seen in other places,” Lamont said, adding, “… and now we’re going to be giving them even more gear starting on May 1.”

The data released Friday night shows a system in distress. More than half of the residential facilities have had at least one resident die after becoming infected. In one out of every 10 nursing homes, at least 10% of the residents have died.

It could get worse before it gets better.

During the same 10-day period, the number of residents who have contracted the virus doubled – spiking from 1,713 to 3,423 people.

In one-in-four nursing homes, at least 25% of the residents have COVID.

The leader of the association that represents the nursing homes said Friday night they are doing everything they can to stop the highly contagious virus.

“The spread of COVID-19 within Connecticut nursing homes is a reflection of the pernicious character of the virus and is in no way a reflection of the quality of the nursing home or the care it provides,” said Matthew Barrett, president and CEO of the Connecticut Association of Health Care Facilities, the state’s largest nursing home association. “ … The data continues to tell us that nursing home operators and employees who are doing all the right things are seeing firsthand how highly contagious and insidious the virus is for the residents they serve.”

The first round of data released April 16 showed that deaths in the state’s nursing homes from COVID accounted for closer to one-third of the cases.

State health officials confirmed Monday that more than half of all coronavirus-related deaths in Connecticut involve nursing home residents — despite very recent projections that it had been closer to one-third.

But the CT Mirror showed Lamont and state health officials reported last week that 375 nursing home residents had died from the coronavirus as of Tuesday, April 14 actually represented almost 56% of all deaths statewide from the infectious disease.

That report stunned many, partly because the nursing home share of the overall death total had risen much more slowly, from 29% to 35%, between April 7-13.

The Lamont administration now is asking local health officials to recognize the coronavirus as the cause of death, regardless of the presence of a positive test, if other evidence, such as severe respiratory symptoms, are present.

The new report issued Friday breaks down the 768 deaths among nursing home residents into two categories: 568 who were “laboratory confirmed” COVID-19 positive, and 200 for whom the coronavirus was the “probable” cause.

Lamont’s chief operating officer, Josh Geballe, initially reported Friday that the updated nursing home fatality count represented 43% of the coronavirus death toll statewide. But while the nursing home data was released Friday, it only was current through Wednesday at 2 p.m. Comparing deaths among nursing home residents as of Wednesday with statewide deaths through Wednesday yields a ratio of 50%.

Increased focus on nursing home deaths also prompted calls this week from two state legislative leaders, as well as from Connecticut’s largest healthcare workers union, for more state funding for masks, gloves, disposable gowns and other protective gear for workers at these facilities.

“The data must be used to inform and prioritize the delivery of resources to nursing home providers in need of PPE [personal protective equipment] and testing supplies — particularly as nursing homes statewide have assumed increased responsibilities in caring for COVID-19 patients,” Mag Morelli, president of LeadingAge Connecticut, the coalition representing nonprofit nursing homes, said after Friday’s report was released.

What? The cause of death is Coronavirus even if there’s no virus present. Why weren’t these nursing homes more quickly?