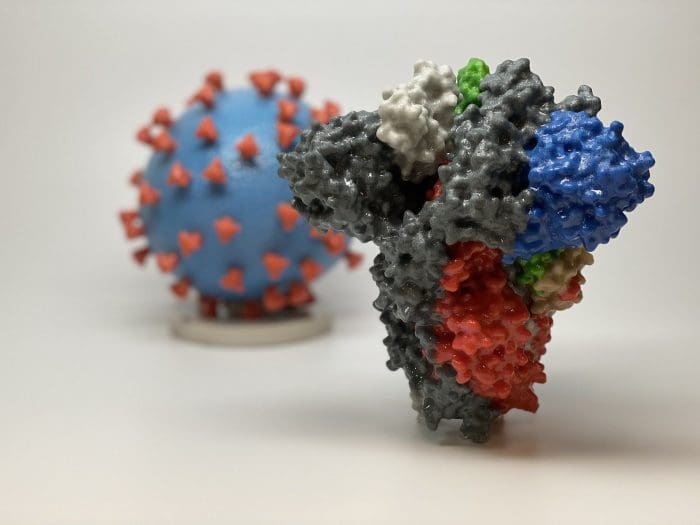 Drive through testing is available in Stamford, Darien, New Canaan, Greenwich and Stratford.

This was publicized on the social media site NextDoor. State Senate Majority Leader Bob Duff (D-25) said it’s legit: a group of doctors is offering the service. You need to register, fill out a screening questionnaire and registration for insurance billing. The average cost of the test is $95 and a subsidy may be available.

On the other hand, NancyOnNorwalk is in contact with a potential COVID-19 patient, who said she called and was told that she had to have a high fever or have traveled out of the country.

So what about testing in Norwalk?

A Monday press release from the Governor’s Office said “alternate COVID-19 testing locations have been approved at several hospitals throughout Connecticut, and each of them are at varying stages of setting-up drive-through testing procedures.”

Anyone seeking to be tested must have a prescription from their doctor and make an appointment in advance.

The Board of Estimate and Taxation has postponed the budget meetings it had scheduled for this week, in the wake of Gov. Ned Lamont’s executive order giving municipal governments an extra 30 days to complete budgets.

So, there will not be a public hearing on the operating budget Wednesday.

This reverses an earlier City announcement, in which it was said the meetings would be held. The thought was that a large meeting could be held in Concert Hall , where people would be able to spread out.

Board of Ed going virtual

The Board of Education meeting scheduled for 7 p.m. Tuesday will be held, just not in City Hall.

“Given the information that has been released this past weekend, Oak Hills is taking this action to be a good neighbor and responsible citizen to help stop the spread of this virus.  In the interest of protecting staff, golfers, and visitors to the park, this action, while disappointing and unfortunate is one, we must take,” he wrote. “…We can be thankful that we have had such mild weather, which has allowed our patrons to enjoy the greatness of Oak Hills at a much earlier date than usual.”

Dickens promises to keep everyone informed.

The SoNo Collection cuts back

Lamont has signed another executive order, which: 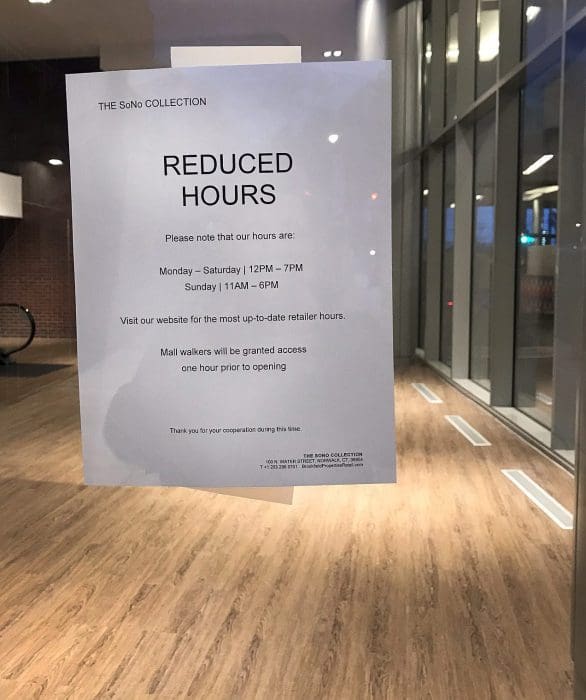 A sign in the window at The SoNo Collection.

So, if gatherings are limited to 50 people, why is The SoNo Collection still open?

“It is a retail outlet. There would not be a gathering in any one location on close proximity of 50 or more people,” Mayor Harry Rilling wrote. “The restaurant establishments in The Sono Collection would be subject to this ban.”

The SoNo Collection is has reduced its hours. It’s now open from noon to 7 p.m., Monday through Saturday, and 11 a.m. to 6 p.m. Sunday.

“Since yesterday’s update, an additional 15 Connecticut residents have tested positive, including 13 more in Fairfield County, one more in Hartford County, and one more in New Haven County. This brings the total number of positive cases reported in Connecticut (including presumptive positive) – from both the State Laboratory and private laboratories – to 41.”

A county-by-county breakdown of the positive cases includes:

Stop & Shop is offering seniors an early morning chance to shop, with no younger folk around.

Starting Thursday, the stores will be open between 6 and 7:30 a.m. to anyone 60 years old or older, the company announced.

“We’re making the decision to offer this every day of the week to allow for community members in this age category to shop in a less crowded environment, which better enables social distancing. They’ll also be shopping prior to any other customers entering,” the company said. “…Although we will not be requesting ID for entry, we ask that you please respect the purpose of the early opening – and do the right thing for your neighbors. Store associates do reserve the right to ask customers to leave if they are not a member of this age group.”

Stop & Shop has also shortened its hours to allow its workers time to restock the shelves. It’s now closing at 8 p.m.

These CT numbers do not appear to include the 20 additional positive cases (out of 31 tests) disclosed in Westport yesterday. The virus is here in full force. Self-isolate.

Rather than one-by-one city public meeting notices regarding virus related schedules, based on current estimates of an estimated relief date of August, the City should establish tentative schedule of all planned public hearings, subject to confirmation at that time.
Current proposals of holding public hearings/meetings in larger spaces (such as auditoriums) to allow for “spacing” poses limitations for those who have health concerns, but also have issue concerns, especially the elderly stakeholders.

I greatly appreciate Stop and Shop opening early for seniors. I called the pharmacy to confirm they will be open during those early hours and they said no, they will continue their usual hours. Many seniors pick up mediations when grocery shopping. It’s why some fill their prescriptions there. It seems to somewhat defeat the purpose of opening early to keep seniors safe if a return trip is needed.

It’s absolutely ludicrous that S&S opens @ 6:00 in the morning for the elderly. How about providing FREE delivery for the. Many elderly are not quite up at that hour.