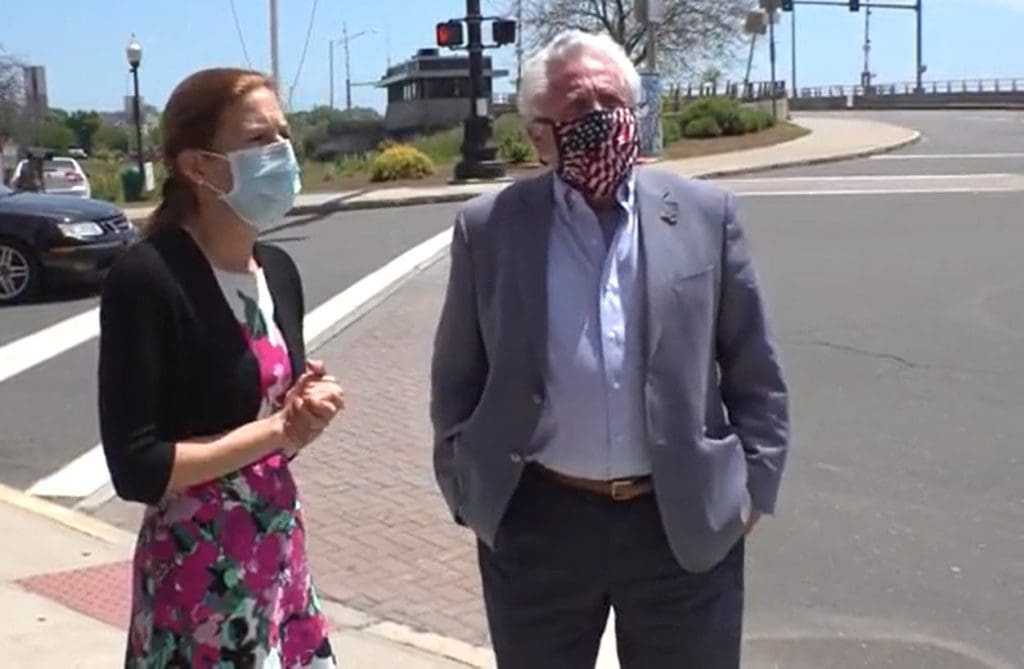 A tour of open restaurants

The concrete barriers are up on Washington Street and on Wednesday, Mayor Harry Rilling, Norwalk Chief of Economic and Community Development Jessica Casey and Lt. Gov. Susan Bysiewicz went for a stroll to see what was going on.

It takes about a day for a business to get a permit to reopen, Rilling told Bysiewicz. At Tuesday’s Common Council meeting, he said 47 of 50 applicants had been cleared. Casey told Bysiewicz that those restaurants are open all across Norwalk.

Matt Storch of Match, a restaurant on Washington Street, said the recently installed concrete barriers help as they provide more room for tables, making it possible to break even. He agreed that the permitting process was smooth and said he hasn’t heard that any SoNo restuarants would not be reopening.

The library did not open Tuesday, director Sylvia Archibald said in an email to NancyOnNorwalk. “The mayor called on Monday and said that we were to remain closed.”

Norwalk Communications Manager Josh Morgan explained, “Mayor Rilling had a good conversation with Third Taxing District Chair Johnnie Mae Weldon over the weekend. While the Mayor has broad authority under the Civil Preparedness Declaration he signed on March 14, everyone agreed it made sense for the East Norwalk Library to follow similar guidelines as the Norwalk Public Library as outlined in the Reopen Norwalk Plan.”

NoN contacted Hennick for a response to comments made by Diane Cece of the Eastern Norwalk Neighborhood Association (ENNA) during one of those online public meetings. Cece questioned the legality of public hearings held in a virtual space.

Cece is correct that “the FOI Commission has said that anyone can attend and observe the meeting of a public agency and cannot be forced to sign in or identify him or herself as a condition of that attendance,” Hennick wrote. “When the Governor issued his executive orders temporarily revising the state’s in person meeting requirements, I don’t think the order envisioned a change in the law about signing in.”

“However, what happened almost immediately around the state were instances of people hacking into the meetings and disrupting them in a nasty way, hurling racial epithets, insulting  board members and basically making it impossible for the board to conduct business. Those hackers were not, by the way, connected in any way to the communities holding the meetings. They merely were pranksters out to disrupt business,” Hennick continued.

This led communities to require citizens to provide names and e-mail addresses to enter meetings, he said.

“Now while that clearly doesn’t comport with the FOI Act as we know it, I can’t honestly say that I know what the Commission would say should the issue be raised in a complaint,” he wrote. “The Governor’s executive order was issued in March with no direct link to the statute and the Commission hasn’t met since. Would these be considered acceptable, extenuating circumstances? I don’t know.”

Funny, cuz half the restaurants in SoNo still aren’t actually open. Whole lotta good that one extra parking lane is doing. Rilling, you should have just shut down the whole eastbound lane, you nincompoop, and doled out designated space to each of the restaurants like you do for the art festival. DUH.

The only place where it would have made any difference to shut down the parking lane might have been outside Blind Rhino, whose employees I know to have been hit pretty hard by all this. But nope, that’s definitely not happening, is it?

This is what incompetent crony governance gives us. Maybe next year we’ll actually elect a true progressive with a real vision for Norwalk.

Mr. Rilling,
Outside of the “group” haircuts for cops, is this another blatant show of Norwalk “officials” hypocrisy? How does this strike you…

Did you see the front page of the Hour yesterday? (May28th). You must remember, you were there.

But yet you close everything down out of panic but these two common council members, of your wn party, can be in a bar with no masks and less than 6 feet apart.

DEMOCRATIC HYPOCRISY AT ITS BEST.

David – I believe they said that wasn’t possible for a long term solution because of fire truck access. I guess there is no access to the rear of the buildings on the west bound side of the road for the ladder truck. It needed a certain amount of clearance which is why the current set up was done. So, I think it was actually safety considerations – not incompetence that lead to this solution.