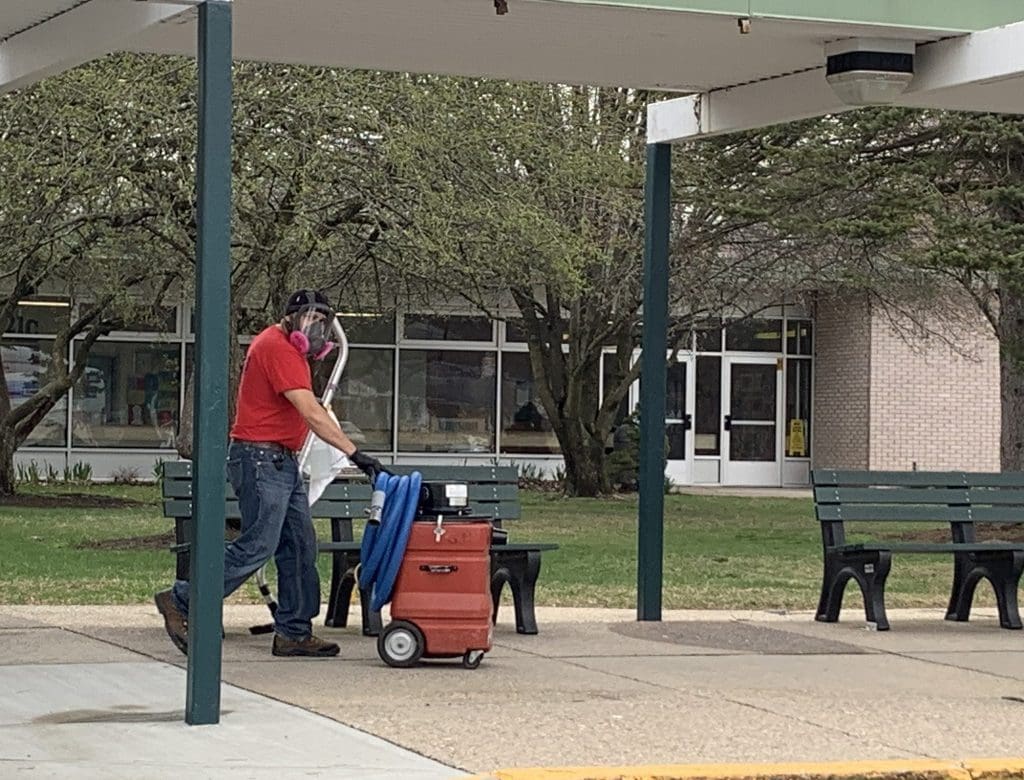 Originally, it was expected that the kids would be out of school for two weeks, Gov. Ned Lamont said Monday.

“I regret to announce, I think we’re going to push off that date where they could possibly open at the earliest to April 20,” he said, at his daily press update conference.

This was discussed by the Norwalk Board of Education last week.

“The state is preparing for the eventuality that we may not resume instruction the rest of the year,” Norwalk Superintendent of Schools Steven Adamowski said. “…Personally, I’m hoping that after our April break, we would be able to resume instruction.”

It was suggested that the April break could be cancelled and used for instruction, if the children are back in the buildings. Adamowski said he didn’t think that was realistic.

“I think the optimistic view of events going forward might be that we could return after that second break, which is the week after Easter, which would be the second week in April,” Adamowski said.

Mayor Harry Rilling took to social media Monday to lash out at the federal government, writing:

“Our country is in a State of Emergency. This is not a Republican or Democratic issue. This is our country !!

“Stop the Partisan politics and pass a bill that will support our small business community and our municipal governments.

“Our nation’s Mayors know what we need to get through this difficult time. Listen to us!!

“STOP the games. Democrats and Republicans need to come together for the good of our country”

One Norwalker replied with a summary of situation, writing, “they need to pass a bill for an economic aid package for Americans affected by the Coronavirus. They had 3 votes since the weekend and it hasn’t passed because of Senators being too political and not thinking about what our Country needs during this emergency.”

Rilling said that was “exactly” the case.

“Mrs Pelosi and her peers should be ashamed of themselves,” one Norwalker said in response to Rilling’s post.

“ALL should be ashamed,” Rilling replied.

Another Norwalker posted, “So you don’t want to prioritize the small businesses in Norwalk? I don’t understand. The bill is lopsided at best.”

“I am totally in support of small businesses in Norwalk, in Connecticut, and around the country. Small businesses are the lifeblood of our economy. We need to do everything we can to help them through this difficult time and bring them back stronger when this is over.

Finally, he was asked if Norwalk planning on delaying or postponing property taxes that will be due in July.

“Property tax law is controlled by the state of Connecticut. We will work with them to see if there’s anyway we can delay the time that property taxes are due,” Rilling replied.

The schools are being sanitized by a commercial company, Adamowski said last week. The work began with Silvermine elementary and NPS was waiting on reports of parents testing positive. About two schools will be done every three days, he said.

Rilling authorized the use of the City’s Rainy Day Fund to cover the expense. The cost is approximately $600,000, Norwalk Communications Manager Josh Morgan said,

There isn’t an abundance of vacant nursing home space in Norwalk. So, does Rilling have any thoughts on where beds might be set up?

“We are having that conversation with the state of Connecticut. My chief of community services has been in touch and we are looking at possible locations where people could be temporarily housed if they test positive,” Rilling said in an email.

“We tend to double the number of people who are infected every three, four days. That gives us an idea of what our capacity is going to be looking like over the next four weeks,” Lamont said, during his news conference.

It’s estimated that 15 percent of the people who get infected need hospitalization and about 5 percent of those people end up in intensive care, Lamont said.

“Right now, it looks like the amount of time one spends in the ICU is maybe two weeks, where in China, it tended to be four weeks,” Lamont said. “I am looking for good news and that may mean one way that we can add a little bit of capacity to out ICUs.”

The pleas for social distancing are an attempt to slow the spread of the disease, Dr. Matthew Carter said.

“More cases are coming, more hospitalizations are coming,” he said. “We want to make sure that for every person who needs to be in a hospital, who needs to have oxygen, maybe they need an intravenous line because they need fluids, we’ll be able to find a bed and receive the treatment that you can only get in the hospital.”

“The spring Yard Waste collection schedule has been pushed back by at least two weeks. Instead of collection beginning on April 6, it is now scheduled to begin on April 20. These dates remain subject to change as the situation surrounding coronavirus continues to evolve,” Rilling’s daily update said.

Good for the Mayor blasting Washington. Although, his response should be aimed at his own party. The democrat additions to the bill include:

With the elections coming up,what could go wrong?”

“The latest executive order from Gov Lamont suspends limitations on gifts that were enacted after the corruption scandal that sent John Rowland to prison in 2005. It also takes limits off political campaign contributions.

Lamont says he needs the flexibility to accept donations of protective medical equipment and other items during the coronavirus crisis.

Legislative leaders and regulators on Monday said the governor was within his powers to order the changes, and the orders do not encompass the kind of pay-to-play scenarios that resulted in Rowland’s guilty plea and Bridgeport Mayor Joe Ganim’s federal prison stint.”

The only thing I question is yard wast collection. I am not sure why this is not essential? People are home working on the yards and this waste has to go somewhere.

Re your reporting above on the number of covid-19 patients that require care in an ICU, I believe that you have either (uncharacteristically) erred in reporting Gov. Lamonts comments, or the Governor misspoke.

Are the landlords going to work with renters, since places have closed and some can not collect unemployment due to some reason or other they have no income, or is the landlord going to evict. Same as home owners with mortages are the banks going to help or foreclose this is what the needs to be addressed not just big or small business’s All of us are hurting one way or another. And people who are not smart enough to stay home and take this seriously well let’s just say there not the brightest light on the tree and leave it at that.