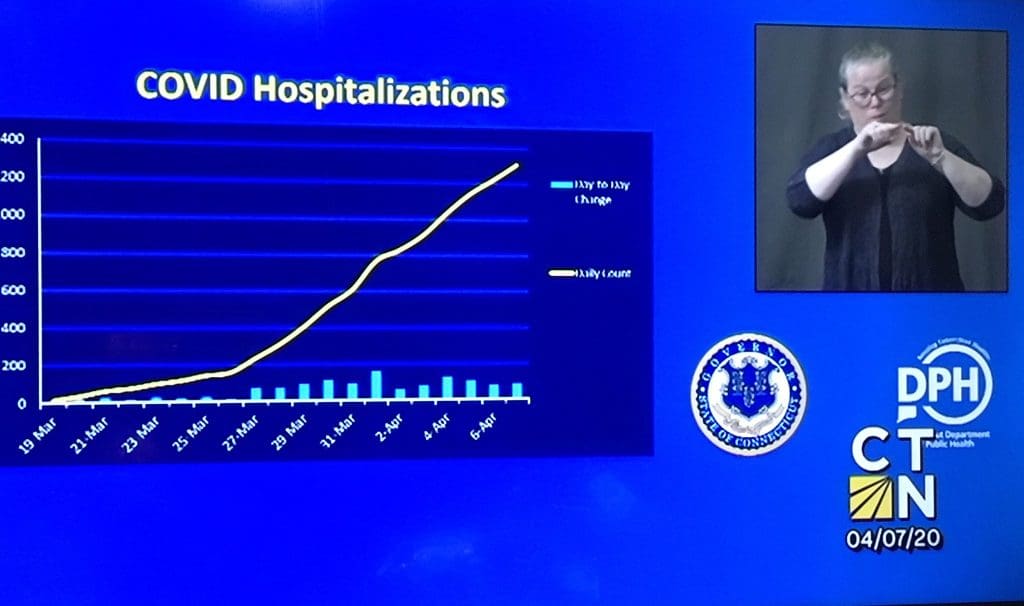 CT-N shows a chart during Gov. Ned Lamont’s Tuesday briefing. It’s good that the upper line is “not a hockey stick,” shooting straight up, he said. The bottom of the graph shows actual net increase in people being hospitalized on a daily basis; “that is trending slightly lower. It gives us, in our hospitals, the breathing room that we need so desperately.”

The death reported Tuesday by Mayor Harry Rilling was of a person who was at least 80 years old, Rilling’s daily update showed.

“Since yesterday’s update, an additional 875 Connecticut residents have tested positive for COVID-19, bringing the statewide total to 7,781,” Gov. Ned Lamont’s update said. “To date, more than 29,036 tests have been conducted in Connecticut among both state and private laboratories. Approximately 1,308 patients have been hospitalized. The total statewide total number of COVID-19 associated fatalities is 277.”

Lamont, in his evening briefing, said Connecticut has added “an 87 more net people hospitalized, ‘net’ meaning people going in versus those who are being discharged.”

Nuvance Health, owner of Norwalk Hospital, declined Tuesday to provide NancyOnNorwalk with specific information about the number of COVID-19 patients it’s treating in the hospital. There are 613 people hospitalized in Fairfield County, according to the State. Fairfield County has 132 laboratory-confirmed COVID-19 deaths.

A review of Lamont’s updates shows a history of Fairfield County COVID-19 hospitalizations:

Lamont said from a state perspective, the “net people hospitalized” has averaged 90 people over the past five days, or 90 more people a day. “At least we can say we seem to be flattening out. What does that mean? That means it gives our hospitals more capacity, it gives them more time to plan, gives them more time to make sure that we have ventilators and people in ICU rooms.”

Connecticut’s peak may be mitigated, due to people following the social distancing guidelines, Lamont said.

The increase in Fairfield County COVID-19 hospitalizations is:

Nuvance Health has put out a call for volunteers, seeking people 18 years of age and older with a clinical or healthcare background to assist with the projected COVID-19 surge.

Lamont said that according to New York, 75 percent of the people who are hospitalized are subsequently discharged. Connecticut should have statistics on that Wednesday, he said.

“The overwhelming majority of people who contract COVID go home, 14 days and they’re back on the game,” Lamont said. “And that’s a overwhelming, like 99 percent for people under the age of 50. Obviously, there’s a … a lot more risk for people over the age of 70. Still, the chances of recovery are strong, as long as you follow the protocol. Folks over 70 are more likely to be hospitalized. Ventilators obviously are one way that we’re able to keep people alive and so far, we have enough ventilators, that nobody has been denied.” 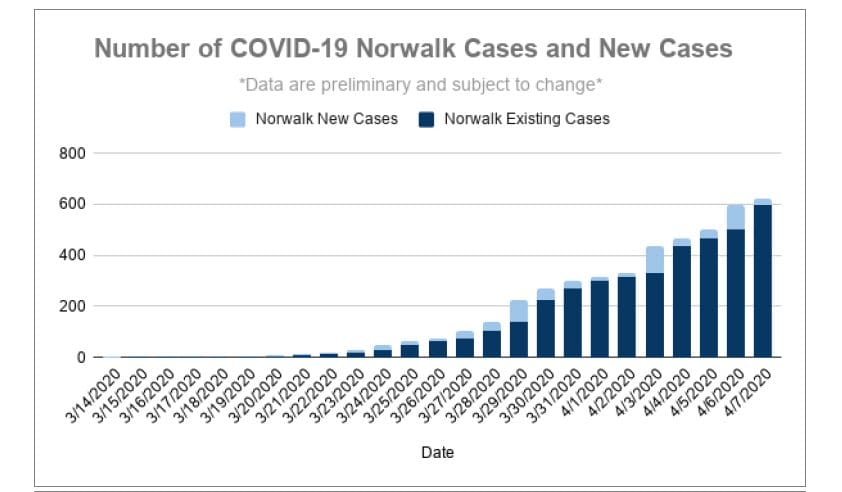 Last week the projections for deaths were upwards of 250,000. The same model this week projects 60,000. In the meantime China, reports no deaths yesterday. When the smoke clears on this from their crematoriums, we should all buy American products

When the smoke clears from the mess that Trump created with his lies we should all vote for President Biden.

Ron Ron what are we going to do with you?

Tysen Tysen I am just stating the facts. You know what they say facts are a stubborn thing.

I agree wholeheartedly with Ron Morris. Malevolent and viciously incompetent Trump needs to be removed from the White House as soon as possible.

The blame game is ridiculous at this point in time. The virus has no party affiliation or boundaries. The snarky comments by all should be ignored or blocked it’s the last thing anyone should be arguing.

ALL OF YOU CAN DO BETTER.

Actually Sam pointing out about fault is very important at this time. Its the only way to make sure the responsable do not do it again.I find that the ones that dont want this to happen are the Trump supporters as Trump is the one at fault.
Look up 4th pillar of democracy and you will see what I am saying.