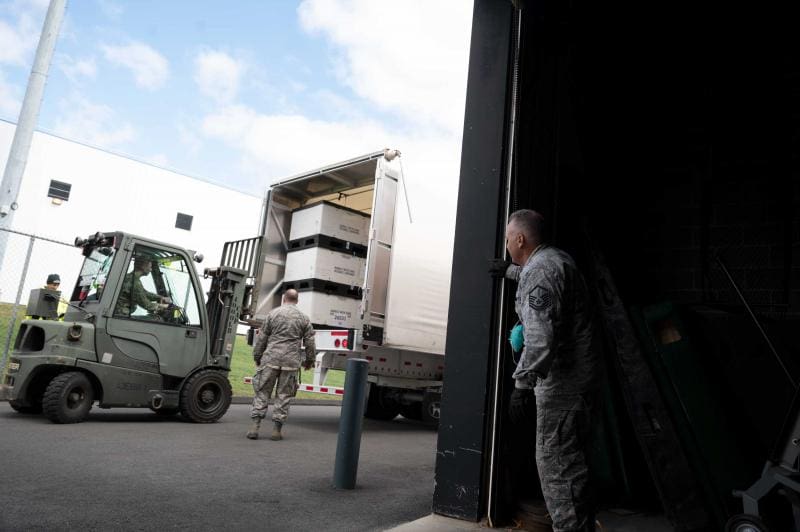 HARTFORD, Conn. — Connecticut officials are bracing themselves for a peak in coronavirus cases to hit Fairfield County in mid-to-late April, before the virus surges across New Haven, Hartford and eastern Connecticut, according to projections released Friday.

Predictions of the surge came on a milestone day for the state: Exactly four weeks ago, Connecticut announced its first COVID-19 infection at Danbury Hospital.

More than 900 state residents are currently hospitalized and 131 have died  of what the Department of Public Health classifies as “laboratory-confirmed COVID-19 associated deaths.”

The exact terminology became an issue Friday when Lamont was asked about his reference the previous day to the death of an infant as “probably the youngest person to ever die of COVID.” Dr. Matthew Cartter, the state epidemiologist, said the DPH tracks deaths of persons  tested positive for COVID-19, but the cause of death is determined by the medical examiner.

“We do not determine causality,” Cartter said.

After coronavirus cases peak in Fairfield County in the next two-and-a-half to three weeks, New Haven County should expect its surge about two weeks later, Lamont said. The disease would then continue through the state, peaking in Hartford County probably sometime in mid-May.

State officials said the impacts outside of Fairfield County may be progressively less severe. The lowest impacts are expected in eastern Connecticut, where significantly lower population densities are predicted to blunt the virus’ impact.

The state may need about 12,000 beds to combat COVID-19 at its peak, Lamont said Friday.

“We can bend that curve and we can flatten that out,” Geballe said. “Hopefully, reduce the number of infections in total as well. That gives our health care system a much better chance to be able to deal with that peak.”

Lamont is urging Connecticut small business owners to jump on a $349 billion federal relief package that offers forgivable loans to keep workers on the payroll.

The applications went live on Friday, prompting some lenders to welcome the deluge of inquiries. But other banks said they still don’t have guidance from the federal government on how the program is supposed to work.

The Paycheck Protection Program — one piece of the $2.2 trillion stimulus package — is intended to help small businesses and nonprofits whose daily operations skittered or ceased when states such as Connecticut asked residents to stay home to curb the rapid spread of coronavirus.

The Treasury Department said the loans can cover up to 8 weeks of payroll costs, including benefits. The funds can also be used to pay interest on mortgages, rent and utilities.

If loans are used for qualified expenses, they will be fully forgiven. The catch: Employers must keep workers on staff or quickly rehire workers and maintain their salary levels.

Lamont encouraged small businesses with 500 or fewer employees to immediately document operating expenses so they could file the loan application as soon as possible.

“There’s no minimum or maximum amount that any state can get for the paycheck protection,” Lamont said Thursday. “Get your application in thoroughly and early and that will advantage you. What advantages you, advantages all of us here in the state of Connecticut.”

Nutmeg State Financial Credit Union, headquartered in Rocky Hill, said it had received more than 100 inquiries about the program in the past week.

“All week we’ve been working with business owners and preparing them with what documentation they might need, if they qualify, the requirements of the program,” said Dana Clark, the credit union’s vice president of lending. “They’ve been able to collect some of that information and apply today.”

In order to handle the high volume, Clark said staffers are being cross-trained: “Our branch traffic we’ve limited to drive-through only, so some of our retail staff are now pitching in.”

In addition to credit unions, some large lenders like Wells Fargo, Huntington Bank and Bank of America said Friday that they are ready to go with the program. But others, including JPMorgan Chase, said they wouldn’t accept applications, citing lack of guidance from the Treasury Department.

U.S. Sen. Chris Murphy, D-Conn., is calling out the federal government for a lack of transparency in how the Federal Emergency Management Agency (FEMA) is distributing critical COVID-19 medical supplies to states.

In a letter to Vice President Mike Pence Thursday, Murphy wrote that not having an efficient, centralized system has sowed confusion and led to “severely counterproductive competition between states, health care facilities, and federal agencies to secure limited supplies, driving up prices and exacerbating critical shortages.”

On Thursday, Lamont said the federal government’s distribution of personal protective equipment and ventilators was “a source of endless frustration.”

So far, the state has received 50 ventilators from the federal government, Lamont said. He estimated that the state will need an additional 1,500 ventilators when the virus peaks in Connecticut.

Domestic violence victims who want to file a temporary restraining order in Connecticut will no longer need to go to a courthouse. Through an executive order signed Thursday night, the state is now temporarily waiving certain filing requirements in a bid to help those who may be unable to leave their home.

Judge Michael Albis, chief administrator of the family matters court, said the executive order means that applicants won’t need a notary public or other authority to take an oath, in person, swearing that their statements are true.

Applicants who prefer to file by going to a courthouse are still free to do so, but officials hope people take advantage of the temporary change while many courthouses have closed or reduced their hours due to COVID-19.

Under the new guidelines, temporary restraining orders may be filed via email during courthouse hours. Applicants may sign electronically or ask a third person to electronically sign for them in cases of disability or limited language proficiency.

The Connecticut judicial branch said the forms and instructions will be posted on its website next week.

The WNBA has postponed the start of its 24th season — initially set to open May 15 — because of the coronavirus pandemic. There is no indication when play would begin. The league was scheduled to open training camps April 26.

Currently, two WNBA cities are major hot spots for the virus: New York and Seattle. The WNBA said it will still hold a “virtual” draft April 17.

Mohegan Sun Arena, home of the Connecticut Sun, has been closed since mid-March over coronavirus concerns. When the casino closed, it was the first time it ceased operations since opening in 1994, the Connecticut Mirror reported.

The WNBA is the longest-running professional women’s sports league.

This story comes to you courtesy of the Connecticut Mirror. CT Public Radio reporters Harriet Jones and Ryan Lindsay contributed to this report. This report contains information from the Associated Press.

With the peak in COVID-19 cases expected over the next several weeks, Governor Lamont unfortunately amended Executive Order 7N on March 26th to allow “religious, spiritual, or worship gatherings” of up to 50 people while limiting certain secular gatherings to 5 or less. This virus does not discriminate between believers and non-believers. The Governor’s exception to allow large groups to congregate defies the medical evidence about the aggressive nature of the spread of this virus and does not consider the health and safety of the general public and the many brave health care workers working without sufficient PPE and who are risking their health and that of their families in sacrifice to those who fall ill. In fact, it also defies his own advice on Twitter and on this post:” Don’t go to school… don’t go visit your grandparents… don’t go outside and play hoops with your friends… don’t go to a worship service.”

As we quickly approach the days ahead where religious communities across our state will celebrate Passover, Easter, and Ramadan at a time when the number of COVID-19 cases are on a steep rise, please write to Governor Lamont and your local representatives to ask them to consider amending EO 7N to include religious et al. gatherings in the 5 and under limits.

NOW, THEREFORE, I, NED LAMONT, Governor of the State of Connecticut, by virtue of the authority vested in me by the Constitution and the laws of the State of Connecticut, do hereby
ORDER AND DIRECT:
I. Restriction of Social and Recreational Gatherings to No More Than 5 People. Effective immediately, and through April 30, 2020, unless earlier modified, extended, or terminated by me, the prior order set forth in Executive Order No. 7D, prohibiting social and recreational gatherings of 50 people or more, is hereby amended and modified to require that all such gatherings of six (6) or more people, including but not limited to, community, civic, leisure, or sporting events; parades; conceits; festivals; plays or live performances; conventions; and similar activities, are prohibited throughout the State of Connecticut, except that religious, spiritual or worship gatherings shall not be subject to such increased restrictions, and shall instead remain subject to the prohibition on gatherings of 50 or more people, provided that they employ reasonable and appropriate distancing measures. To further clarify this order, it does not apply to government operations, private workplaces, retail establishments, or other activities that are not social or recreational gatherings.