A coyote. (YellowstoneNPS, under CC PDM 1.0)

NORWALK, Conn. — Complaints spiked when the pandemic hit, Robert Sirico said: people were home and surprised to realize coyotes are in our midst.

They’ve been here for decades and, “What they’re looking for is mostly smaller, easier things that they can subside on, such as mice or rabbits, or the occasional injured deer or older deer. They’re not actively looking to harm anyone or even our pets,” he said.

Sirico, Norwalk Senior Animal Control Officer, spoke to Common Council members recently at the behest of Council member Thomas Keegan (R-District D), who said he’s seen social media commentary about people encountering “different kinds of wildlife” in their backyards and parks. But the report of a black bear struck by a car in Easton was “really the impetus” for the discussion because he realized, “we’re really in almost a partnership with our wildlife.”

“I expect that a lot of our residents wouldn’t know what to do if they encountered a coyote or a bear or other kinds of wildlife,” Keegan said.

“We do have black bear that come and go from Norwalk, we do have bobcats, which can also be quite intimidating or beautiful when they’re seen,” Sirico said. And when you see coyotes, “The important thing to remember is that the coyote by nature is a very curious, intelligent animal that is also extremely skittish and nervous at all times. And that the last thing it wants to do is have a conflict with a person because it realizes that if it’s injured or if it’s harmed or hurt, that it would be in trouble itself.”

While they aren’t “actively looking” to harm pets, “if they were to come across an opportunity where if somebody was feeding cats outside and the cats were kind of relaxed, laid back, the coyote would start taking cats,” he said. “…If you have a dog that would run up to a coyote, especially a smaller dog, when the dog initiates contact then there’s going to be a problem for the dog obviously.”

Coyotes weigh 35-40 pounds, are brown, tan or grey, and live up to 15 years, Sirico said. The have long term bonds with their mates and produce four to six puppies every year, between April and May. 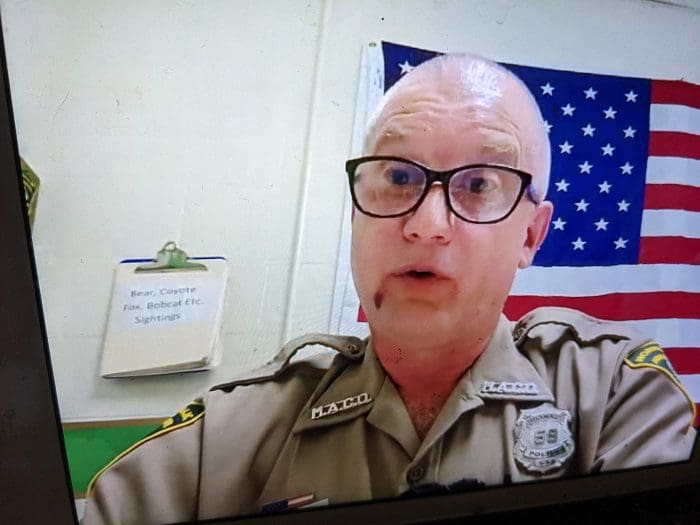 While “we’ve had a lot of complaints or concerns” from people about coyotes, “We’ve never had a coyote in Norwalk or Fairfield County try to attack a person,” he said. “Full disclosure, in the last year or so maybe almost two years, we’ve had two smaller dogs that were ‘taken’ by coyotes. We had one other dog that was chased by a coyote. In all these incidences, there was evidence to show, from video or by witness’s accounts, that the dogs, the canines actually initiated contact with the coyote.”

If an unattended dog runs up to a coyote, it will respond as a wild animal and “then the dog would have an issue or would get itself in trouble,” he said.

Coyotes are commonly out and about during the daylight hours and have even been seen at Calf Pasture Beach, poking through the rock jetties, according to Sirico.

They “serve a very important and vital part of our ecosystem… if they were no coyotes, we’d have an overabundance of a lot of those smaller animals, like rabbits, or, or mice or rats or chipmunks, because that’s a big part of the coyotes’ food sources.”

People have concerns about deer, and coyotes help with that, he said. “They also keep Canadian geese in check. They do take Canadian geese, which keeps the population in natural bounds, which is important.”

So, coyotes are “good to have” because “they do serve a vital role in keeping a checks and balances on our wildlife that we have in Connecticut.”

Again, coyotes are curious and “and they tend to stare at people in a very strange, awkward way and make people feel uncomfortable,” he said. They’re not a threat. “Most of them have a comfort zone of maybe 20 to 30 feet.”

People are living in the coyote’s range and bird feeders, garbage left outside or a shed not “properly” installed – so that rabbits or woodchucks make a home underneath –  all attract coyotes. The shed bottom dwellers are food for the roaming predators and this can be prevented with lattice or anything that blocks the smaller animals from moving in.

People call and say there’s a coyote on the property, staring at a stone wall, Sirico said. He goes out, scares the coyote off and then finds a chipmunk or a mouse or something in the stone wall. “That’s what the coyote was looking at. He’s not rabid. He doesn’t have rabies. He’s not sick. He’s just looking for food like anything else.”

So clean up the yard. Bird seed shells will attract coyotes because it attracts their prey.

The federal government has funded studies on coyote management, Sirico said. Euthanizing or relocating them doesn’t work because if you euthanize them, other coyotes move in, and if you relocate them, wherever you bring them probably already has a coyotes and there will be conflict.

“The only real way and the safe way, the smart way, to deal with coyotes is to be what you would call hazing, or make them feel uncomfortable,” Sirico said. So if you’re letting your dog run free in Cranbury Park and you see a coyote, immediately call your dog and put the dog on a leash. Then stare back at the coyote, clap your hands, stand up straight and make a lot of noise.

“Make yourself as big, as intimidating as possible,” he said. That should excite your dog as well, and “the coyote is gonna be ‘Oh my god, it’s too much for me to handle.’ Because again, they don’t want conflict, he’s gonna run away, he’s gonna take off.”

Back away. Don’t turn your back. The coyote “may at a distance watch you, because they’re very curious by nature, but they’re not going to chase after you.”

“In the end, they’re not looking at people or pets as a food source. What they’re looking for is something easy, but they are very curious. And that’s what gets them into trouble,” Sirico said.

There are no leash requirements in Connecticut and people think there dog will obey but “when something does happen, it doesn’t work out that way, unfortunately,” he said, recommending that people keep their canines on a leash unless they’re in a fenced in area.

Treat the dog as if it were your child, he said. “Keep an eye on it, keep it safe. And if they do happen to see anything in regard, whether it be a deer or a rabbit or anything, you need to call the dog back and secure it and let the wildlife leave. And then the dog can go back out and do what it has to do.”

It’s important to respect wildlife, even on your property, he said. “You should make some effort to at least coexist with your wildlife neighbors in order just to do the right thing, be a positive and productive person.”

Actually, in Norwalk, it’s “the racoon that has caused the most trouble,” Sirico said. “Raccoons are very obstinate, they will come into someone’s home, they’ll break a screen, they’ll come in we’ve had to walk into people’s kitchens, and you know, basically go right on the kitchen table and then help themselves so where the person was pulled out for food, because they’re very brazen.”

Keegan said the Council members plan to work with animal control and the ASPCA to develop a handout to be distributed when residents get their dog licenses.

But again, Sirico said, “We’ve always had coyote in Norwalk. They are a very valuable important part of our ecosystem, you know, without them it wouldn’t be as balanced as it is. They do serve a purpose, they do keep a lot of animals that people you know, have issues with, such you know, damaging their front lawns and stuff like rabbits or beer and such doing damage to their property.”

Thank you for this gentle, sane message

Mr. Sirico should start reading ‘Next Door.’ A cat on Mohawk Drive was killed by a coyote in September. A lot of incidents may go unreported where a pet is killed. Coyotes may have been here for decades but with all of the ‘overbuilding’ we see a lot more of them.

At Friends of Animals, we agree with Robert Sirico’s views on living with coyotes and other wildlife, and advance non-lethal practices for managing human encounters with coyotes. Moreover, coyotes are transient creatures so removing one means that new coyotes are likely to replace the previous animal by moving into the area.

We have a brochure on implementing methods that have been shown to help shape coyote behavior and lessen risks of conflict. Please call FoA’s Darien headquarters for a free copy. 203.656.1522

Having recently lived in Cranbury for 13 years I am well aware of the wildlife that exists so close to populated areas. In my yard I have seen Bear, Coyotes, Bobcat, River Otters, Mink and many other animals. My friends used to tell me that I lived in “Mutual of Omaha’s Wild Kingdom”! I say, be aware, be alert, and totally enjoy it. Who knew that Norwalk is so wild?