Statistically, Connecticut and the rest of New England are among safest places from crime. 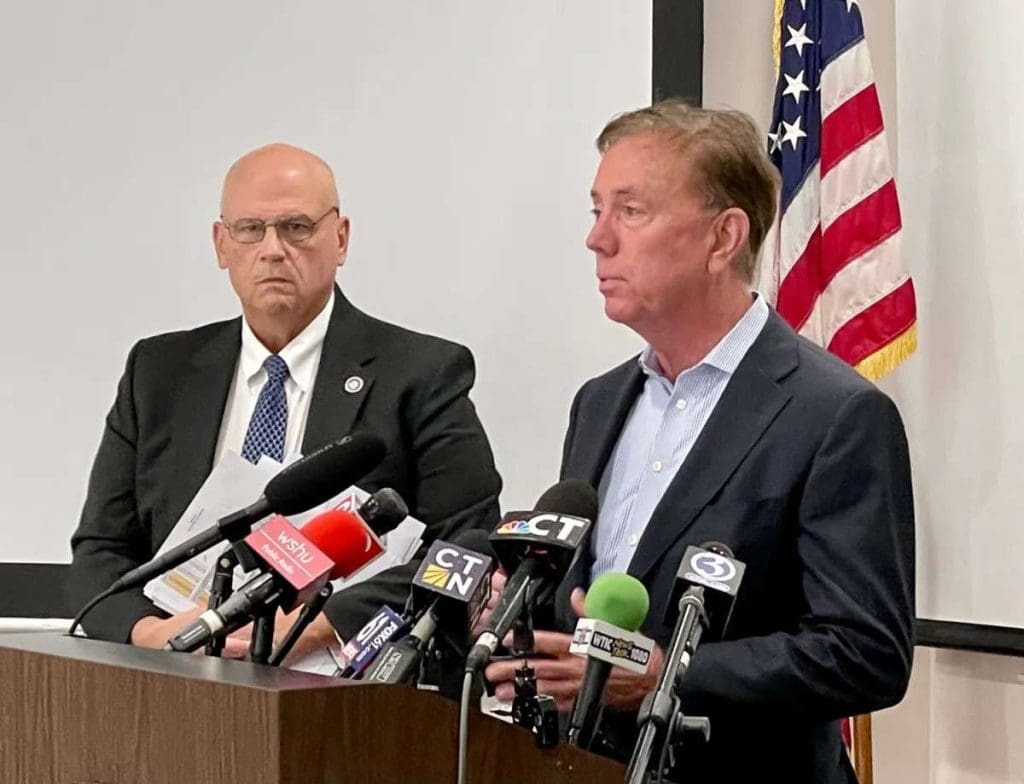 Connecticut resumed its decade-long drop in crime last year after an increase in 2020, according to a report released Monday by the state Department of Emergency Services and Public Protection.

Violent crime fell the most, dropping by 9% from 184 to 168 offenses per 100,000 persons in a state that generally ranks among the safest in America, along with the rest of New England. Property crimes fell by 2%. The overall drop was 3%.

Gov. Ned Lamont was present for the release of a report that comes in the final six weeks of a reelection challenge from Republican Bob Stefanowski, offering a rebuttal to Stefanowski’s claim that crime was “out of control” and rising.

“These numbers show a very positive trend. And really hats off to our State Police and our municipal police,” Lamont said at the Department of Emergency Services and Public Protection headquarters in Middletown.

The Stefanowski campaign had no immediate comment, but House and Senate Republican leaders forcefully moved to undermine its message.

“Ask your neighbors and friends if they feel safer today, despite what this report says, after the majority party has decriminalized some offenses, emptied out state prisons, lessened penalties and altered bail requirements in recent years,” said House Minority Leader Vincent J. Candelora, R-North Branford.

Senate Minority Leader Kevin Kelly, R-Stratford, said the report glossed over a rise in unsolved cases. Clearance rates dropped to 16.7% in 2020 and 15.5% in 2021 after averaging 23.4% over the previous eight years.

The release of the report comes a day before Lamont and Stefanowski are to meet in the first of two televised debates, providing statistical ammunition for the Democratic governor. (NBC Connecticut is live-streaming the debate at 12:30 p.m., then broadcasting it at 7 p.m. and again at 11 a.m. on Sunday.

Commissioner James C. Rovella, who oversees an emergency services department that includes the State Police, acknowledged the political dimension of releasing the statistics now versus waiting for the FBI’s delayed national report.

“I don’t think it’s appropriate that I hold on to these numbers any longer. I’ve had them for about a month waiting for the FBI to release,” Rovella said.

Michigan, North Carolina, Nevada, Minnesota, North Dakota and others have already released their statewide data, not waiting for an FBI report that appears delayed to a shift to a new reporting system, Rovella said.

In response to a reporter’s question, Rovella said politics played no role, but he acknowledged questions about the timing were inevitable, whether the release came now or closer to the Nov. 8 election.

“It’s a double-edged sword,” Rovella said. “Another three weeks is the other side of the coin … So the numbers should come out, and they should come out now, because this is usually, traditionally, the time we put them out.”

Lamont said he played no role in the timing of the release, but he acknowledged that crime, crime statistics and perceptions about crime historically shape American politics.

“I remember President Trump’s inaugural, where he was talking about American carnage, carnage in the streets, and a lot of fear mongering. And I think that was incredibly unfair to police forces across the country,” Lamont said.

Statistical trends do not provide the same emotional impact of individual crimes, and Lamont made no effort to say anyone anxious about crime is wrong.

“If there’s a crime that happens in your neighborhood, your street, your community, that hits very close to home. And we take that to heart,” Lamont said.

Aside from disagreeing on actual crime trends, Lamont and Stefanowski have differed over the police accountability bill adopted in Connecticut in 2020 after the police killing of George Floyd.

Stefanowski blames the new law, specifically a provision limiting immunity for police in civil lawsuits arising from wrongdoing, for the difficulty in recruiting police.

Rovella said recruiting for police and other first-responder jobs is down across the U.S.
“That’s a national trend, not only with police but with fire and other public service, so we’re battling that as we go. So most of your police departments and your regional academies have all went to smaller size classes,” Rovella said.

Lamont said he always is open to tweaks and improvements to the accountability law.

“I’m willing to talk to the legislature about that. But I think you heard from the commissioner that what you see in terms of recruitment is a nationwide phenomenon,” Lamont said. “So, I don’t want a lot of misinformation out there.”

“The Democrats have put the rights of criminals ahead of our police personnel when it comes to qualified immunity and other policy changes they have enacted in the last few years and have exposed our sworn officers to unprecedented liability that has caused many to alter their procedures,” Candelora said.

House Republicans conceded last week there have been no personal liability verdicts returned against a Connecticut police officer since passage of the law.
A national survey by the International Association of Chiefs of Police found no single cause for the recruitment challenges.

“Rather, multiple social, political, and economic forces are all simultaneously at play in shaping the current state of recruitment and retention,” the chiefs reported. “They are both systemic in nature and reflect individual- level considerations, making solutions to the problem particularly challenging.”

There were 150 murders and non-negligent manslaughters reported in Connecticut, up 3 from 147 in 2020, a high for the decade. Over 10 years, the state has averaged 112 murders or manslaughters a year.

Rovella, a former homicide detective and Hartford chief of police, said the most significant numbers for him were those showing a favorable trend in aggravated assaults.

“What’s good about these numbers, so overwhelmingly, to me is aggravated assault,” Rovella said. “These are the assaults committed by hands, bats, knives, non-fatal shootings. They’re down dramatically.”

No national comparisons for 2021 are possible until the FBI releases its report, but previously the 10 safest states were Maine, New Hampshire, Idaho, New Jersey, Connecticut, Vermont, Massachusetts, Rhode Island, Wyoming and Virginia.
Connecticut crime statistics can be viewed online at https://portal.ct.gov/DESPP/Division-of-State-Police/Crimes-Analysis-Unit/Crimes-Analysis-Unit