At left, a Tuesday Tweet from Gov. Ned Lamont; at right, a reply from Norwalk attorney Darnell Crosland.

Lamont, on Tuesday, highlighted behavior in a Bridgeport bar as “not obeying the rules” intended to curb the spread of the coronavirus. Crosland, on Wednesday, said “it’s unfortunate that black people were singled out in the Governor’s tweet, as no one wants to feel targeted or blamed.”

Lamont’s Chief of Staff, Paul Mounds, said Lamont will make an example of any establishment not following the rules.

Crosland is a Democrat who switched parties last year and unsuccessfully sought the Republican candidacy for Norwalk Mayor. The former Norwalk NAACP President then ran for Common Council but came in last, after being arrested and charged with witness tampering and attempted bribery. He pleaded not guilty. The case is pending. 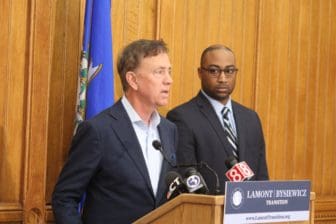 COVID-19 is spiking in Connecticut. Lamont, in his Tuesday press conference, said that the daily positivity rate for COVID-19 has “scooted up to 4.1 percent” in the latest batch of 13,039 tests, the highest one-day number since early June.

Lamont’s Tweet included a video from the bar, showing people packed closely together and not wearing masks. “The less of this we see, the stronger our response will be. This isn’t fair to all of the restaurants across CT looking out for their customers,” Lamont wrote.

“Historically black people have felt the brunt of an unjust and unequal system of governance, so the Governor’s tweet has really hit the core.  I’ve gotten so many calls and the community keeps asking me, but isn’t he a Democrat.  It’s as if they expect more as black people because he is a Democrat.

“Bridgeport is synonymous with black and minority people, unlike Greenwich where the Govenor {cq}lives or is from.  So to watch that tweet and read those words, it’s almost as black people as a whole are being blamed for Covid.

“I can tell you this, I want to believe that the Govenor {cq}did not mean for his tweet to be racially insensitive.  We all know that since Covid domestic violence has been on the rise, unemployment has sky rocketed, and people simply want an outlet.  The people depicted in the video tweeted by the Govenor {cq}could have done more to be responsive to Covid, but just like the white bar in Fairfield that was ticketed earlier in the week, we did not deserve to highlighted as the cause.

“We are one Connecticut, a united Connecticut.  I invite the Govenor {cq}to call my office and agree to meet with the community, and explain that he did not mean to be racially insensitive.  And it’s always good to apologize.  I have faith in the human spirit, and I hope the Govenor {cq}will accept this as an opportunity for reconciliation in a time when our country is crying out for equal rights and equal justice.”

In response, the Governor’s Office released this statement from Chief of Staff Paul Mounds:

“Governor Lamont will make an example of any establishment that is not playing by the rules when it comes to mitigating the spread of COVID-19, which is what the governor did during his statewide press conference on Monday. He criticized the owners of a restaurant in Fairfield, which was also flouting sector rules by masquerading as a restaurant, but really operating as a bar with customers standing shoulder to shoulder, and serving from the bar, which is currently not allowed. If there was a video of it, Governor Lamont would draw even more attention to it. The Bridgeport establishment, which originally shared the video on its own social media page, has faced multiple citations, and even a shut down for its lack of COVID compliance. The kind of owner behavior seen in those two instances in Fairfield and Bridgeport isn’t fair to the thousands of other restaurants in Connecticut who are abiding by the guidelines, and making every effort to keep their customers safe.”

Did I miss something? I read Lamont’s tweet several times and it never mentioned race. Trust me, I am no Lamont defender, especially when it comes to his dictatorship and suspension of the Constitution here in CT over the past 6 months, but I saw no mention of race in his tweet. He merely showed a video a bar had posted itself as an example of what he sees as a sin against his declaration of martial law.

When I thought the world couldn’t get more bizarre Crossland has proven me wrong…I think we need to have a satellite take a picture of Earth to prove the world is not upside down..

How is this a racial issue?

Now this is a matter of seriousness, and proves yet again the system racism that is being practiced. Thank you Mr. Crosland for speaking up!

Lamont also closed a Fairfield bar that was not adhering to Covid restrictions.

What is missing from the conversation is the motivation behind choosing to publicly shame a Black bar in Bridgeport and privately shame establishments in white neighborhoods.
Yes, He will close and reprimand any place that doesn’t follow COVID restrictions but we must open our eyes and do the extra work to see the implicit bias that this prompts.
Of all the restaurants he closed, the black one gets publicly shamed.

Think deeper than the tweet, think deeper than the statement put out by the chief of staff, you will realize the Crosland is speaking on something white people don’t want to: Implicit Bias where you all promote the idea that black ppl are the cause of societal problems and therefore need to be policed.

The comments, with the exception of NiZ reek of white ignorance, please do some reading on your own biases and do better.