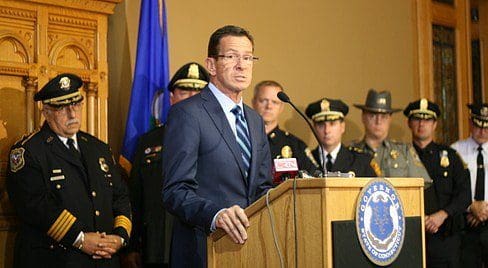 HARTFORD, Conn. – Gov. Dannel P. Malloy touted his support of municipal aid Monday as a new report found crime in Connecticut at a 40-year low in 2013. Sparing towns from funding cuts has kept cops on the street, he said.

The governor announced the findings of an annual report, called “Crime in Connecticut,” Monday during a state Capitol press conference with law enforcement officials from throughout the state.

The report found that crime had dropped 8.6 percent in Connecticut during 2013. Meanwhile, violent crime dropped by 10.8 percent that same year and property crime has declined by 7.6 percent.

“We have not seen crime numbers this low in more than 40 years and we have a population that is 20 percent larger today than it was 40 years ago,” Malloy said. He said that the drop in violent crime was double the 5.4 percent decline nationally.