Cumulative number of COVID-19 cases by town. Map does not include 136 cases pending address validation. (Department of Public Health) 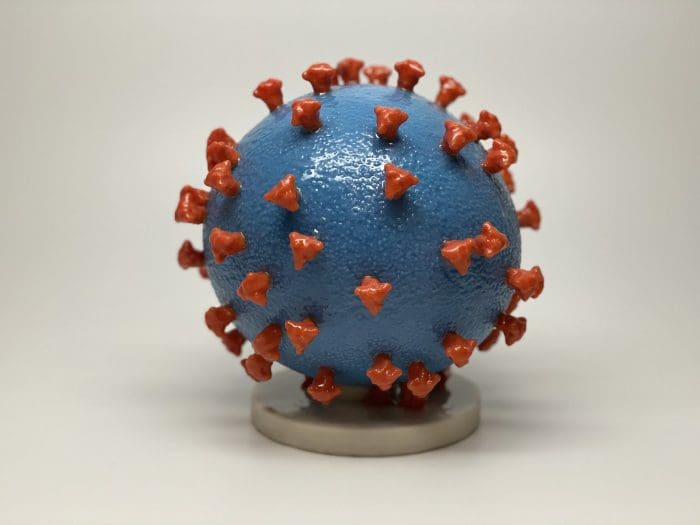 This illustration, created at the Centers for Disease Control and Prevention (CDC), reveals ultrastructural morphology exhibited by coronaviruses seen in an image released to the media by the CDC. Note the spikes that adorn the outer surface of the virus, which impart the look of a corona surrounding the virion, when viewed electron microscopically. (Courtesy of National Institute of Allergy and Infectious Diseases {NIAID}.)

The state recorded its highest single-day COVID-19 rate in four months on Monday, with nearly 2.5 percent of all tests coming back positive, said Gov. Ned Lamont during his Tuesday briefing.

And while the infection rate for the past week stood Tuesday at 1.5 percent— also above the sub-1 percent rate Connecticut enjoyed for much of the summer — the governor insisted the state still has the pandemic largely under control.

The administration reported 320 of the 13,398 tests completed Monday were positive, an infection rate of 2.4%. One more resident died from the coronavirus, making 4,533 fatalities since the pandemic began.

Another 17 people were hospitalized Monday with COVID-19, raising the statewide total to 172 — also a high mark since June.

“Keep a little perspective,” Lamont said during a televised, late afternoon briefing. While a one-day rate of 2.4 percent is concerning, he added, it’s something “you focus on, but you don’t dwell on.”

Single-day rate spikes, moving up or down, can be anomalies, the governor said, noting that last week Connecticut enjoyed one single-day rate as low as 0.7 percent.

Connecticut’s weekly average infection rate — a much more important COVID-19 metric for many health care experts — is still one of the lowest in the nation, he said, while other key benchmarks also remain favorable.

Among Connecticut residents hospitalized with the coronavirus in October, 20 percent went into intensive care, 17.5 percent needed to be placed on ventilators, and 6.6 percent died. Those October numbers not only are more favorable than their counterparts in April and May, when the virus was tearing through the state, but have improved even since August.

Just two months ago, according to the administration, 24 percent of those hospitalized went into intensive care, 22.3 percent were placed on ventilators and 8.1 percent died.

Josh Geballe, Lamont’s chief operating officer, said just 2 percent of Connecticut’s hospital beds currently are being used by COVID patients. And the governor added that hospitals overall are only half full, leaving significant capacity should the pandemic worsen again.

Dr. Albert Ko, professor of Epidemiology and Medicine at the Yale School of Public Health and a regular advisor to the Lamont administration during the pandemic, said the improvement is due largely to most Connecticut residents accepting the hygiene, social distancing and other precautions needed to mitigate community spread.

“It got imprinted on our behavior” over the past spring and summer, Ko said. “People are much more careful about their social contact.”

Seniors represented a disproportionate share of the coronavirus cases early in the pandemic, when testing was limited. But the state and its private partners routinely now administer between 10,000 and 15,000 tests per day.

Ko said that means more children and young adults with the virus — who are less likely than seniors to have serious cases — now are being identified. And the expanded testing also means infected patients of all age groups likely are being discovered and treated earlier.

Still, both Ko and Lamont acknowledged some limited outbreaks were anticipated this fall due to multiple factors. Many communities reopened schools to in-person learning and the colder weather marks the start of the flu season.

Lamont also ordered a third easing of restrictions on business activities that was effective last week.

Connecticut has seen recent coronavirus outbreaks in the Norwich and New London areas in the southeast corner. Ko said there could be additional upticks in various regions this winter, but “I expect them to be more brushfires than they are going to be wildfires.”

The governor again said he would consider tightening restrictions if weekly infection rates approached 5 percent, and were part of a larger trend of aggressive COVID-19 spread.

Mayor Harry Rilling reported 19 new cases Tuesday in Norwalk, bringing the total to 2,393. There were no deaths.

“Over the last two weeks are positive cases have been in levels we have not seen since May,” Rilling said in a CodeRED Emergency Alert message Tuesday afternoon. “This past week we reported 61 cases. Well, throughout the summer, we never went above 20 cases in any one week. Clearly things are not trending in the right direction.”

“Analyzing cases per 100,000 residents helps track the incidence rate of COVID-19 in the community and allows for standard comparisons between communities,” the update said.

Doing the math on that to compare it to Lamont’s statistics, the one-week retrospective infection rate was 1.3 percent, while the two-week lookback was 1.02 percent.

“Our contact tracers are hard at work trying to determine how many of these cases may be connected and what behaviors may be causing these increases. While there have been positive cases reported from the school community, the data tells us an in-person return to school is not causing these increases,” Rilling is quoted as saying. “We must remain vigilant in the fight against this virus. If someone is feeling symptomatic they should get tested and quarantine as they await results. We know COVID can also be transmitted asymptotically, and is why it is critically important for residents to always wear face coverings in public.” 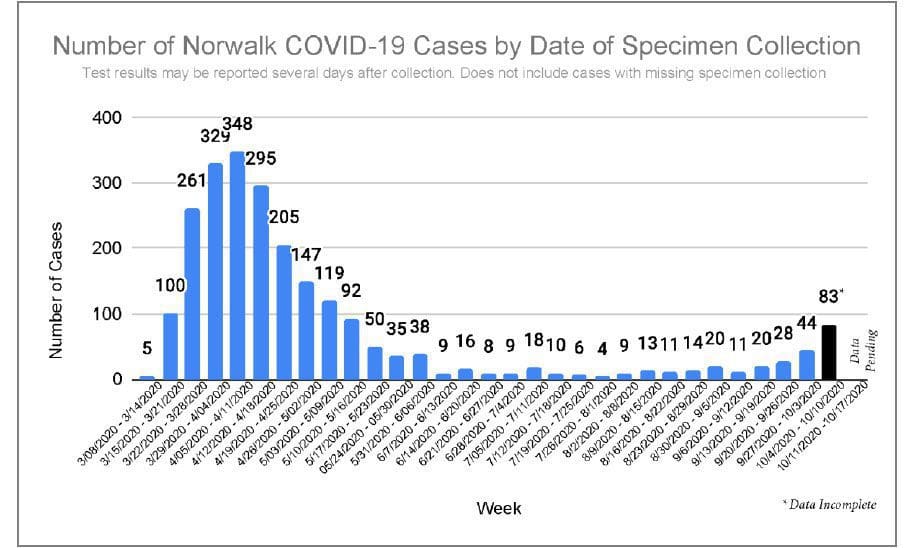 The governor says don’t worry too much about this. The mayor says we should worry. The numbers support the mayor. Sugar-coating the data kills people. A justifiable concern reinforces our determination to act responsibly.

A good article, Nancy, and an important one.

Even though the cdc revised their numbers last month and said that only 6% died of covid alone…??

The number that should have been tracked but never was is how many citizens have been tested. Nearly 2 million tests includes front line workers who may be getting tested every day. What we know right now is the current number of admitted patients is a small fraction of the typical 40- 50 thousand a year from all causes.