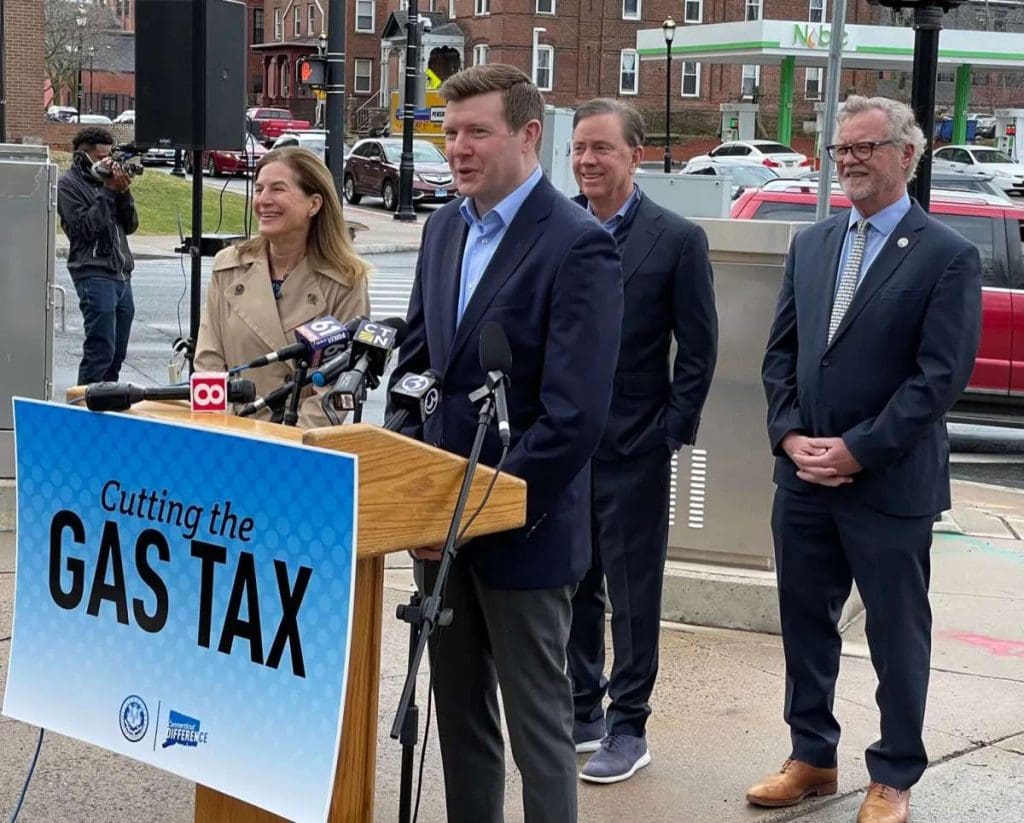 Rep. Sean Scanlon shared the microphone with Gov. Ned Lamont on the day in April the gas tax was suspended. (Mark Pazniokas, CTMirror.org)

Headlines generated by monthly updates of the Consumer Price Index have become reliable gifts to Republican challengers like Bob Stefanowski, whose campaign for governor of Connecticut is tightly focused on the highest inflation in 40 years.

On social media and in comments to the press, Stefanowski pounced Thursday on the latest numbers with a reprise of his criticism that Gov. Ned Lamont and legislative Democrats have provided insufficient relief.

“We’ve got a three and a half billion dollar rainy day fund,” Stefanowski said in an interview. “To me, when you know families are having to choose between buying food, gas or prescription medicines, that’s a rainy day.”

If inflation is largely what Stefanowski talks about, that’s understandable to Rep. Sean Scanlon, D-Guilford, an architect of the Democrat tax relief package passed in May and signed by Lamont.

“Well, it’s all Democrats should be talking about, too, right? I might be an outlier on that,” Scanlon said. “But I think it’s what people are thinking about. And, as is the case sometimes, what people feel and what’s actually happening can be different. But either way, we need to be in this fight.”

Scanlon, who used his position as co-chair of the Finance, Revenue and Bonding Committee to push for the $250 child tax credit that will go out this summer, said Democrats have a two-pronged story to tell: The state has cut taxes — while preparing for a recession by paying down debt and filling a reserve fund.

“We are heading into uncertain waters from a national and international economic perspective,” said Scanlon, the Democratic nominee for comptroller. “And we should not be so quick to make the same mistakes of the past — even if they are the politically easier choices to make. And I think at the end of the day, people will reward that fiscal discipline and the balance that we struck between doing substantial tax reform and saving money for rainy days.”

The CPI numbers released this week showed a 9.1% increase in prices in June over a year ago, more than negating any gains from higher wages. Adjusted for inflation, real average hourly earnings have declined by 3.6% on a yearly basis.Across all levels of politics, Republicans have made inflation the issue.

Quorum, a public-affairs software company, tracked mentions of inflation by members of Congress on social media and in official statements from January to April, finding that the GOP mentioned inflation six times more frequently than Democrats, Axios reported.

President Joe Biden’s approval rating fell to 39% this week, the lowest of any president at this point in his term since World War II. Not surprisingly, as FiveThirtyEight reported Thursday, inflation is largely to blame.

Last month, U.S. Rep. Alma Adams, D-N.C., wrote an op-ed in the Charlotte Observer arguing that blaming President Joe Biden for inflation that is worldwide was “a new big lie” and urged Democrats to be more aggressive in responding.

“From stickers at the gas pumps blaming Biden for energy industry price-gouging, to claims of ‘Bidenflation,’ Republicans are winning the messaging war on inflation,” Adams wrote.

But the vast majority of governors, Lamont among them, are above water with positive net-approval ratings — the difference between voters who approve and disapprove, according to the University of Virginia Center for Politics.

Lamont’s 22% is near the top among Democratic governors. Only John Carney of Delaware (26%) and Andy Beshear of Kentucky (23%) are doing better. Overall,  Republican Charlie Baker of Massachusetts is tops at 53%.

In Connecticut, Stefanowski is trying to both blame Lamont for inflation, which he calls “Biden-Lamont inflation,” and make the case that an insensitive governor is hoarding cash at the wrong time.

The Republican minority in the General Assembly made a similar argument when the budget passed on a straight party-line vote in the House and with limited GOP support in the Senate.

For retirees, it accelerates the exemption of pension and annuity payments from the income tax. For families, it provides $250-per-child credit against the state income tax for low- and middle-income households, up to a maximum of $750.

“There’s always more that we can do,” Scanlon said. “It’s just a question of should we do it. And it’s ironic that the Democratic Party is, in some ways, the party of fiscal restraint at this moment, whereas the Republican nominee for governor and some of his party members of the legislature are acting like Democrats, in some ways, used to act, which is ‘Let’s spend all this money that we have.’”Stefanowski has called for using $1 billion from the surplus for immediate relief by cutting the sales tax from 6.35% to 5.99%, eliminating a 1% tax on prepared foods and suspending taxes on gasoline and diesel fuel. He also would repeal a highway use tax on heavy trucks that takes effect next year.

Connecticut did suspend the 25-cents-per-gallon excise tax on gasoline through Nov. 30, the first state to do so. Its current average price of $4.552 a gallon for regular is the lowest in the Northeast, but still $1.40 higher than a year ago.

Using the money for immediate tax relief instead of paying down Connecticut’s unfunded pension debt is not irresponsible, Stefanowski said.

House Speaker Matt Ritter, D-Hartford, said offering more relief not only would have undercut the state’s ability to prepare for a likely recession, but it would have been difficult given the limits imposed by state rules on the use of surplus funds and federal prohibitions against using federal aid for tax cuts.

“Republicans don’t let that issue go, and we’re not going to,” Candelora said. “The  bottom line is that I think they wanted to create a more robust reserve and pension pay-down, because the more you pay down the pension, the more money it frees up in our out-year budgets to spend.”

“Out-year budgets” is legislative speak for future budgets, and Ritter said caution now, even if it exposes Democrats to election-year attacks, could save draconian cuts next year.

“We could make a lot of disingenuous decisions today that would mean in a year or two we were cutting ECS [education aid to towns] funding or cutting mental health for children or child care investments,” Ritter said.

Two fiscal moderates among Democrats seeking reelection to the state House said Friday they are comfortable running on the relief their party crafted.

“I feel like most of what I talk about all the time is pocketbook issues,” said Rep. Jaime Foster, D-Ellington, whose seat was long in GOP hands before she won an open race in 2020 in the 57th House District of Ellington and East Windsor.

Foster said she has knocked on 750 doors so far, and the conversations are longer this year than two years ago in the district, a farming region north of Hartford that has become more suburban in recent decades.

“When it comes to inflation and the child tax credits, I am getting mixed feedback,” Foster said.

Older voters note that credit is not helpful to them, an opening for a broader conversation about their pensions about to become exempt from the state income tax and the increased state aid that is keeping property taxes level in many towns, she said.

“There’s something for everyone in that budget,” she said. “When we talk about inflation, the best thing that I can tell folks is that our budget did tremendous things for local [finances]. I delivered more money to my two towns than have been delivered in something like 15 years.”

Rep. Kerry Wood, D-Rocky Hill, a fiscal moderate who sometimes breaks with her party, voted for the budget as a source of direct and indirect tax relief. Two of the three towns in her district, Newington and Wethersfield, did not raise taxes.

But she acknowledged that inflation has changed the messaging. To constituents, she characterizes the tax cuts as an offset to higher prices, not a means to get ahead financially.

“They understand we’re in an inflationary period,” Kerry said. “It’s not going to last forever, but it is the way it is right now. And we’re going to do the best we can navigate ourselves out of it.”

On Wednesday, before he left for the National Governors Association meeting in Maine, Lamont said inflation was “slamming” consumers, but a drop in some prices of commodities offers hope inflation will begin to subside.

Scanlon said he shares the governor’s optimism, noting gasoline prices in Connecticut have fallen by 43 cents a gallon in the past 30 days. He also noted that child-tax rebates will go out in August in time for back-to-school shopping, a bit of relief that might improve voter moods.

But there also will be three more updates in the Consumer Price Index before voters go to the polls.

Neither Party’s candidates are focusing on what ought be done to jump start CT’s decade long stagnant economy/employment level/population. Or that most of our school and college grads leave CT for better opportunities elsewhere. Or discuss how CT can move forward with 169 separate towns and cities each with their own public labor force ?
Or how CT can make progress when its 3 largest cities remain some of the nation’s least successful aka poorest ? Or why CT has no hi-tech industry to speak of ?

If current campaign discussions are any guide CT will continue to remain stagnant for another decade with its public employees remaining our largest “industry”. Neither Party has shown a serious interest in jump startling CT’s economy so it attracts major firms bringing good jobs to CT.