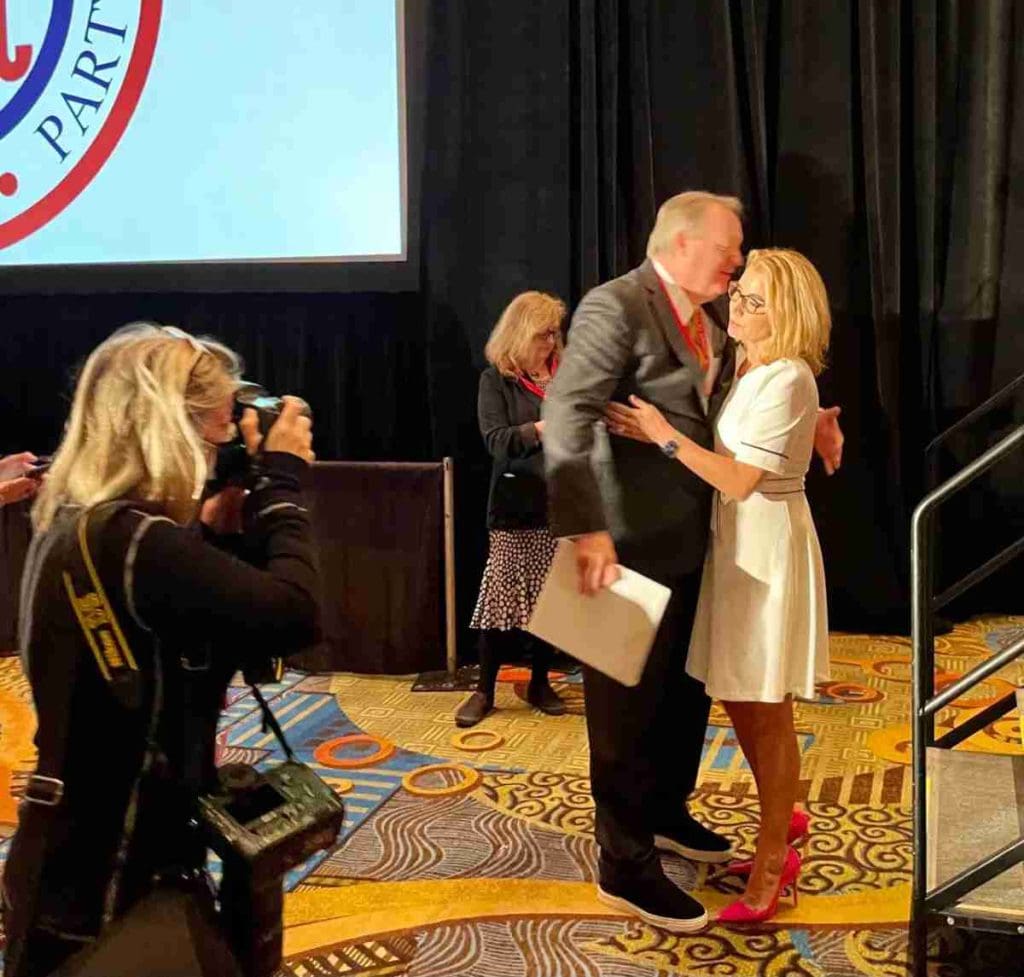 Themis Klarides, a former Connecticut House GOP leader who supports abortion rights and declined to vote for Donald Trump in 2020, captured the Republican endorsement for U.S. Senate in a first-ballot victory Saturday.

The convention’s endorsement will not be the last word, however. Two conservatives, Leora Levy and Peter Lumaj, qualified for a primary in August that could define the identity of a Republican Party at a crossroads in Connecticut.

Republicans also expect a three-way primary for secretary of the state. Dominic A. Rapini of Branford won the endorsement, trailed by Brock L. Weber of New Britain and Rep. Terrie Wood of Darien.

Levy and Lumaj embrace Trump and oppose abortion and gun control, positions separating them from Klarides, who favors gay marriage and voted for the gun-control law passed in reaction to the Sandy Hook massacre.

Uncertain is whether the Connecticut race will entice the interest of Trump, who once lived in Greenwich. The eventual GOP nominee will face U.S. Sen. Richard Blumenthal, a frequent Twitter target of Trump before his social media exile.

Trump’s election in 2016 accelerated a trend that has eroded the GOP’s traditional base among the college-educated, socially moderate voters of Fairfield County, while increasing the influence of blue-collar social conservatives.

On Saturday, at least some of the party’s conservative activists placed a premium on pragmatism. In Klarides, they opted for a candidate who won elections in a swing district in the Naugatuck Valley for two decades.

“We need to nominate someone who has won elections. We need somebody that has name recognition,” said Dennis Swanton, a self-described conservative from West Hartford. “Connecticut is a blue state. We’re not South Carolina.”

Klarides won the nomination with 56.84% of the vote, compared to 22.7% for Levy and 19.95% for Lumaj. Two others, Robert Hyde and John Flynn, had negligible support. The threshold to qualify for a primary is 15%.

Levy is a Republican National Committee member from Greenwich and a reliable GOP rainmaker who was rewarded by Trump with a nomination as ambassador. Her confirmation never came to a vote in the Senate.

Lumaj, an immigration lawyer from Fairfield, unsuccessfully sought the nomination for governor in 2018. He was the nominee for secretary of the state in 2014.

Levy and Lumaj are immigrants who fled Communist nations, Levy from Cuba and Lumaj from Albania. Both talk about socialism as a threat to America.

Klarides was expected to do even better in the convention tally, but delegates said a late flurry of anonymous texts about her voting record and opposition to Trump seemed to exact a price. 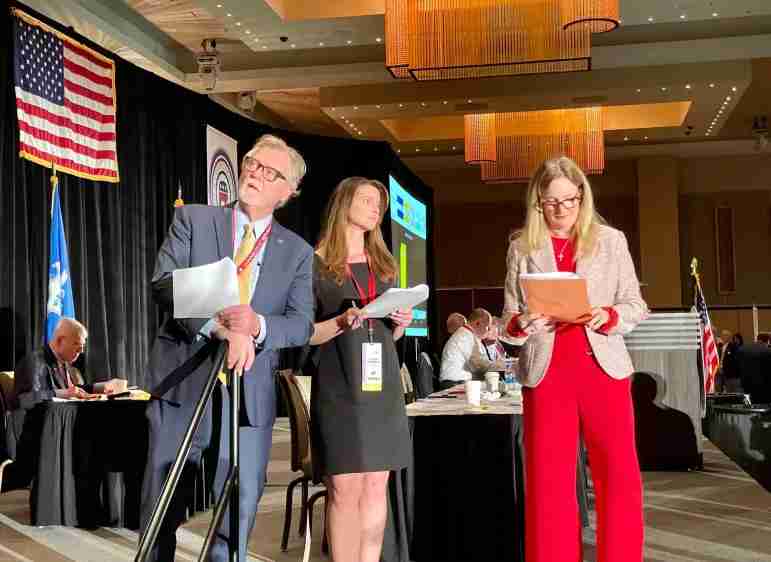 Rep. Donna Veach, a conservative who represents the Hartford suburb of Berlin, one of the blue-collar Democratic towns now in the Republican column, struggled to bring her delegation to Klarides.

“Themis has a little baggage. The [Second Amendment] people aren’t too happy about her. The pro-life people might not be happy with her,” Veach said. “You know what? She’s the most electable.”

Trump’s name was not uttered from the stage Friday night, reflecting the desire of the gubernatorial nominee, Bob Stefanowski, to focus on issues and a message that will expand the GOP base, not contract it.

In a nomination speech for Levy, Michael Garrett of Bridgeport said she had the fundraising contacts to bring donors from across the country and is “pro-life and pro-Second Amendment.

“And she is not ashamed of having voted for Trump twice,” he said.

Klarides, who voted for Trump as a delegate to the 2016 convention, said she declined to vote for either Trump or Joe Biden in 2020, instead casting a protest write-in vote for Larry Cafero, her House GOP predecessor.

On Saturday, she called the anonymous campaigning cowardly.

“You have a problem with me, you should say it and put your name to it. We have a coward in the U.S. Senate seat now. We don’t need another coward,” she said. “We’re gonna agree. We’re gonna disagree. But anonymous texts and emails and Facebook posts are what is bad about politics.”

Klarides, the only candidate in the field who has held public office, has a conservative record on fiscal and criminal justice, clashing repeatedly with two Democratic governors, Dannel P. Malloy and Ned Lamont, before leaving the legislature two years ago.

“I don’t think Sen. Blumenthal has ever taken a punch,” Klarides told reporters after her victory. “And, as you all know, I punched with Malloy, I punched with Lamont and I’ll punch him, because he’s not representing the state properly.”

Fealty to Trump and the national GOP’s anti-abortion platform will be issues — but not for every Republican voter, she said.

Sen. Rob Sampson of Wolcott, who nominated Lumaj, said he believes the party will benefit most by offering a contrast to Blumenthal on social issues, not a candidate trying to neutralize them.

“I think the Republican Party is making a mistake by staying away from it,” Sampson said. “Offer a clear choice, and Peter is a clear choice.”

Ben Proto, the state GOP chair, said the internal goal is to remind Republicans of Ronald Reagan’s philosophy: “The person who agrees with you 80% of the time is a friend and an ally — not a 20% traitor.”

“We ultimately agree on the vast, vast majority of things, and we’ll have some discussion on the other things,” Proto said. “That’s what our Democratic friends do with the far progressives and more traditional liberals, who are just left of center. I’m not concerned about it.” 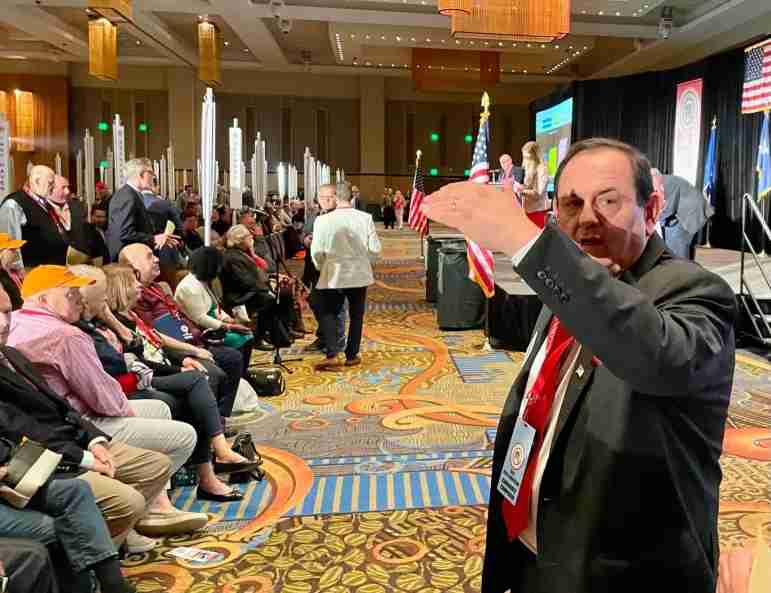 Dominic Rapini scanning for delegates willing to switch votes and get him above 50% of the ballots for secretary of the state. (Mark Pazniokas, CTMirror.org)

The Senate nomination was one of two contested Saturday.

The rules allow for vote switching, setting Rapini off on a hunt for delegates who would give him a second look. Weber and Wood did not.

Thirty-two minutes after the first tally, vote switches put Rapini just over 50%, prompting cheers from supporters of Rapini — and the notion of adjournment.A late entrant for comptroller withdrew, leaving the endorsement to Mary Fay, a West Hartford council member.

Will CT voters have a chance to express their admiration of how the Biden Administration has managed our nations affairs or express demands for major change? No shortage of issues,e.g. Ukraine imbroglio, surge of illegals across our open borders, astonishing inflation, high cost of gasoline and fuel, unprecedented violence in our major cities, Covid pandemic, shortage of housing and on and on. More issues than most voters can ever recall. With a historic low Presidential approval rating there’s opportunity in these CT hills.Will CT voters demand better Federal governance or just “go along” ?