Gov. Ned Lamont, under relentless attack by Republican Bob Stefanowski for signing a police accountability bill opposed by police, accused his challenger Tuesday of exploiting the murders of two Bristol police officers and being too timid to join him in calling for a total ban on AR-15s and similar weapons.

At their second and final gubernatorial debate, Lamont and Independent candidate Rob Hotaling each accused Stefanowski of grandstanding on crime and state finances, questioning how a former corporate finance official could repeatedly refer to the state’s rainy day fund as a “slush fund” with recession on the horizon.

Stefanowski shrugged off the criticism, demonstrating a discipline in hewing to his  central issues of crime, tax cuts and inflation over a 60-minute debate broadcast by WTNH from the Connecticut Conference of Municipalities convention at the Mohegan Sun in Montville. Lamont made news by saying he favored a total ban on the possession of AR-15s and other military-style weapons. Under current law, sales of those weapons and large-capacity magazines are illegal, but the weapons can be legally possessed if purchased prior to the ban.

“They should not be allowed in the state of Connecticut,” Lamont clarified after the debate. “I think they’re killers. We found out they’re cop killers. I think they’re incredibly dangerous in our community. You’re not serious about crime if you leave them on the street.”

Stefanowski has called for repealing elements of the police accountability law that Connecticut passed in a special legislative session after a police officer in Minneapolis killed George Floyd, a handcuffed Black man, by kneeling on Floyd’s neck for nine minutes while three other officers failed to intervene.

Until Tuesday night, the debate over the accountability law focused nearly exclusively on Stefanowski siding with police unions in opposing its sections on police liability and the standards for use of force and warrantless searches. He has neither opposed nor endorsed a section making police liable for failure to stop or report misconduct by other officers. 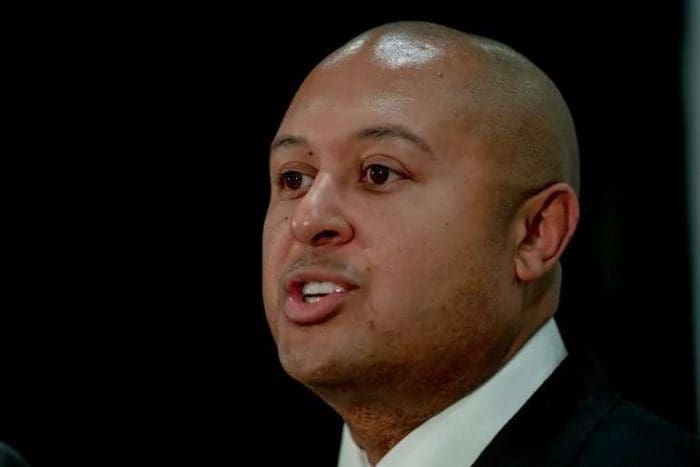 Hotaling, the biracial son of a white father and Black mother, reminded the other two candidates of demands by communities of color for greater accountability of those who police them. Hotaling described being racially profiled, stopped and threatened by a police officer outside his own apartment building.

“I don’t think the average person has ever gone through that experience,” Hotaling told reporters after the debate. “I definitely am certain that Ned and Bob have never had that experience. And it gives you a different perspective.”

Without saying precisely how, Stefanowski again suggested the accountability law contributed to the deaths of Bristol officers Lt. Dustin DeMonte and Sgt. Alex Hamzy, who police say were shot to death in an ambush by a man armed with a weapon that rapidly fired 80 rounds. Sources say the weapon was an AR-15 or similar rifle. 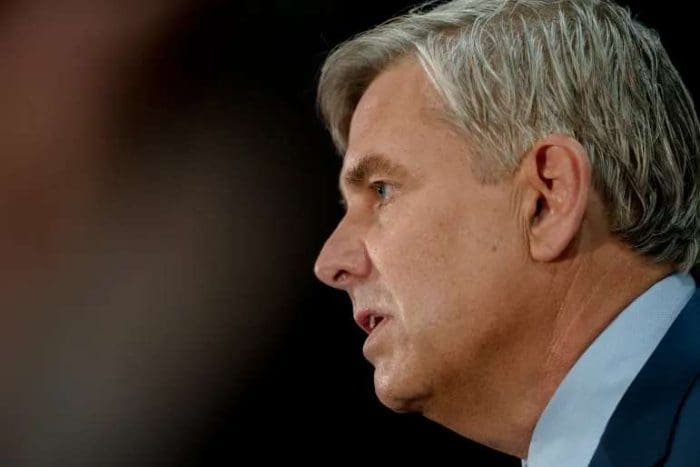 The NRA endorsed Stefanowski in 2018 after he completed a questionnaire that neither he nor the NRA would release. Stefanowski did not seek the NRA’s endorsement this year, and he promises to enforce and maintain the gun-control measures Connecticut adopted after the Sandy Hook School massacre.

After the debate, Stefanowski declined to say if or how his positions on gun control had evolved since expressing whatever positions that won him the NRA endorsement.

“I haven’t evolved at all,” he said. “I think Connecticut’s laws are where they should be. I’m going to enforce them.”

With practiced anecdotes, Stefanowski pressed his attack on Lamont over the first-term Democrat’s insistence that Connecticut is making economic progress.

“I think the governor is living in a different state than Rob and I are,” Stefanowski said. “What I see out there is a man on Dixwell Avenue in New Haven where I grew up headed indoors, asking me whether he should buy prescription medicine or feed his family that night. What I see are the second-highest taxes in the entire country.” 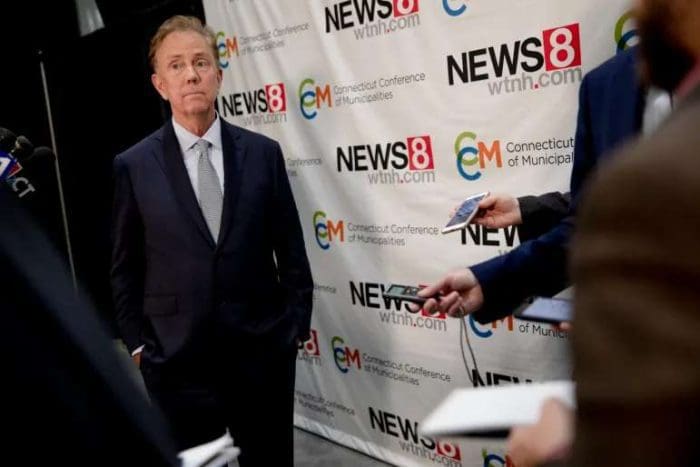 Stefanowski lived in a three-family home off Dixwell Avenue until second grade, when his family bought a single-family home in North Haven. Stefanowski has said the governor is indifferent to the economic struggles of the poor and middle-class and their fears about crime.

A new mailing to urban voters from Stefanowski, who lives in a 13-room hilltop house in Madison, shows an aerial photo of Lamont’s home in Greenwich, noting its nine bathrooms and 8,300 square feet, and saying “Ned Lamont doesn’t care about you. So why would you vote for him?”

Connecticut has a $3.3 billion budget reserve, the maximum allowed by law. Lamont and the legislature have held back another $1.4 billion in federal pandemic relief to prop up state finances in the 2024 and 2025 fiscal years.

On Tuesday night, Stefanowski said those reserves should be spent.

“Everybody in this audience and everybody watching on TV knows this economy is horrible,” Stefanowski said. “Our people are eating through their savings month by month to try to keep up and pay these bills. And at the same time, Gov. Lamont has $6 billion of our money that he refuses to give back that could help that person on Dixwell Avenue feed his family that night. It’s unconscionable.”

Jodi Latina of WTNH, one of the panelists, began a question about abortion by saying there was some recent confusion over the candidates’ positions.

Stefanowski indicated during a television interview last week that abortion should be illegal after the first trimester, a more restrictive standard than Connecticut law. Stefanowski said he misspoke.

“No confusion for me, Jody,” Lamont said. “I support Roe v. Wade. I think the guardrails are appropriate. It was set 50 years ago. I think it works. I’m going to make sure that stays the law of the land here in Connecticut as long as I am governor.” 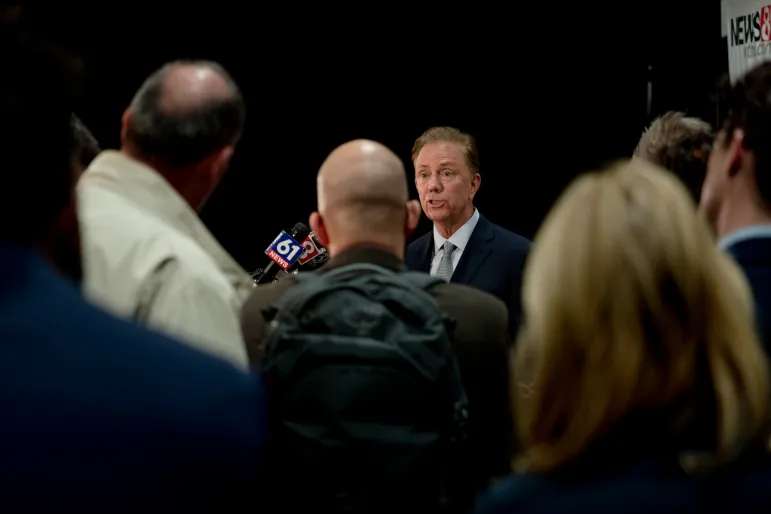 Stefanowski said he supports the current abortion law, but he dismisses the issue as a Democratic distraction from the economy and crime.

“You know, Bob first, he said it’s a distraction,” Lamont said. “Then he said, ‘I misspoke.’ Sometimes when people misspeak, you really realize what they’re thinking.”

Stefanowski said the governor and the rest of Connecticut knows he supports the current law.

“I get it. It’s classic politics,” he said “It’s a distraction.”

Banning the AR 15 does not solve the problem. The problem is we are not addressing the source which is the people committing the crime. In many cases the weapons used can be illegally obtained. If the criminal does not have an AR 15 there are other weapons of choice. Look at NYC (with strict gun laws). Knives, chemicals, pushing people off train platforms. Survey our politicians to find out if they own guns or have hired gun carrying security. Are they more entitled to self protection than the average person?