Towns can vote to opt out of key requirements 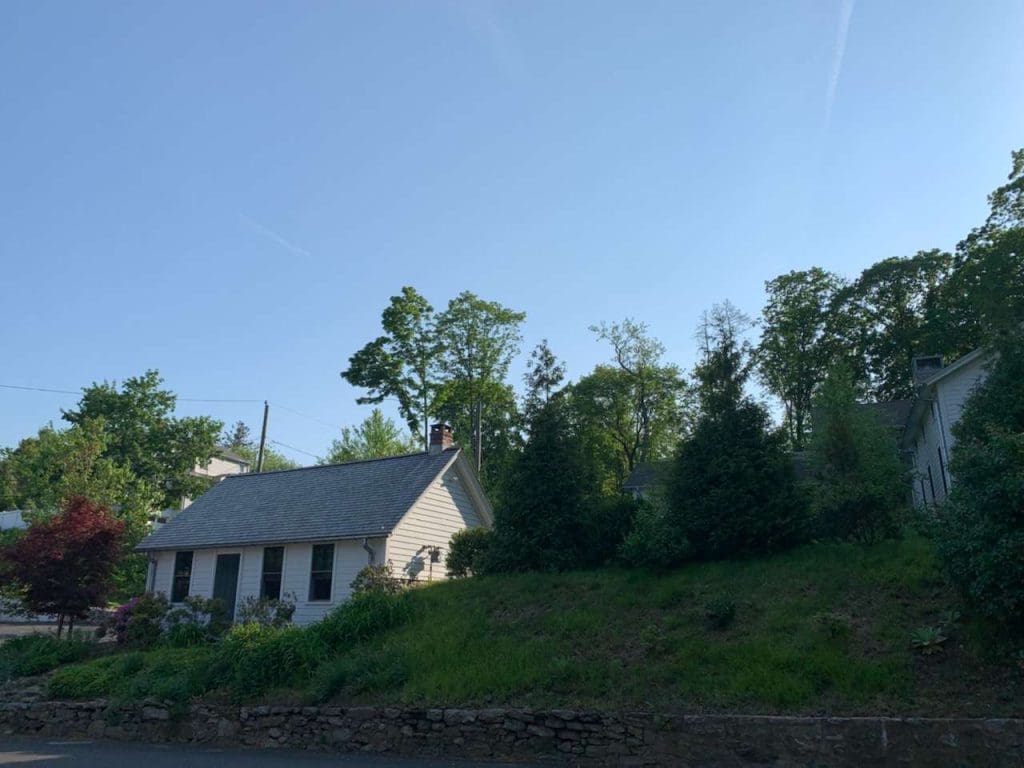 Westport recently began allowing homeowners everywhere in this affluent town to convert parts of their dwelling or detached garages into so-called accessory dwelling units without needing special permission from local officials. Pictured is such a unit. (CTMirror.org)

Contentious legislation aimed at tackling Connecticut’s dubious distinction of being one of the most segregated states in the country was significantly scaled back before winning approval in the state House of Representatives on Thursday.

Language was scrapped that would have required towns to allow the construction of multi-unit housing around some train stations and suburban towns’ commercial centers, and towns would be able to vote to opt out of other key requirements.

The legislation would require towns to allow single-family homeowners to convert parts of their dwellings or detached garages into so-called accessory dwelling units, nicknamed “granny pods,” without needing special permission — but it allows towns to vote to opt out. The bill does require the volunteers who serve on local planning and zoning commissions to receive training in land use practices and legal obligations, though there are no penalties if they fail to do so. And the bill places limits on how many parking spaces a new home or apartment must have — but allows towns to vote to opt out.

The bill was approved after a 4 1/2 hour debate on a 84-59 vote. Every Republican representative voted against the bill. Eight Democrats who represent suburban communities joined them. The bill now heads to the Senate for consideration.

“It’s certainly not what I would’ve wanted. I don’t think anybody who’s passionate or an advocate on housing issues would want this, but it’s the nature of this place, having to take this painfully incremental approach to trying to address a very important policy around housing,” said House Majority Leader Jason Rojas, D-East Hartford. “By painfully, I mean allowing racial isolation and economic isolation to continue to perpetuate to the detriment of the people who are impacted.”

The legislation also forbids towns from requiring a minimum floor area that exceeds health and safety codes for new housing developments. This provision aims to compel towns to comply with a 1988 state Supreme Court decision that found zoning rules improperly denied a truck driver’s bid to build a moderately-priced single-family home in East Hampton that was smaller than the minimum square feet the town required.

Earlier this year, a compilation of the zoning codes in every Connecticut municipality found that dozens of towns are likely violating that decision. That research — conducted by Desegregate CT and its founder Sara Bronin, a professor at UConn Law School —  found that nearly one-third of the districts zoned to allow single-family homes still require minimum square feet, several in excess of 2,000 square feet, and about one-quarter of the districts that allow duplexes have such minimum requirements. 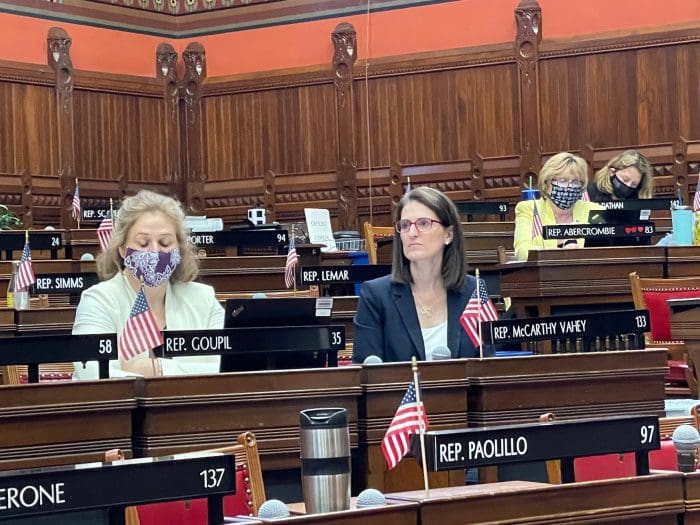 Pressure has mounted throughout the legislative session from those calling for a zoning overhaul so more affordable housing can be developed — and from those who worry such changes will ruin the so-called “character of the town.” Hundreds signed up to testify on the controversial reforms, and the public hearing lasted 24 hours.

Neither Republican nor Democratic legislators were enthusiastic about the final bill.

“Today’s bill is a step forward, but it’s really a step in a long road that we have to take to address the affordability needs of our residents,” said State Rep. Cristin McCarthy Vahey, D-Fairfield and co-chairman of the Planning and Development Committee.

“Incrementalism does happen in this building, and I think we will continue to work on it as the years go on,” said House Speaker Matt Ritter, D-Hartford. “I am disappointed we can’t do more.”

“All of those [controversial] proposals … raise the question and raise the issue of where our state is heading from a development, from a zoning, perspective. And as we stand here, we need to ask ourselves: Are we opening the door to a state-mandated, top-down, one-size-fits-all approach to zoning?” said Rep. Joe Zullo, the Republican minority leader of the development committee. “Do we want to do that? Is it wise to infringe upon the unique character, the unique qualities of every single municipality in this state with a top-down, one-size-fits-all approach? … I know we probably all walk away from this a little bit dissatisfied.” 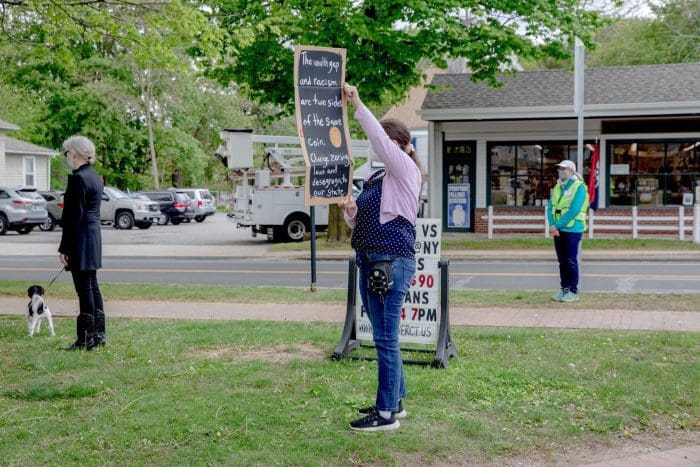 Protestors listen to a speech at a rally for housing justice at the Deep River Town Hall earlier this month. About 70 people gathered at the rally, some with their dogs and with their children. (Yehyun Kim, CTMirror.org)

But Rojas, the first person of color to become majority leader, said there are consequences to leaving land-use decisions up to local control.

“The bottom-up approach has led us to where we are today, which is a segregated state,” said Rojas.

A spokesman for Gov. Ned Lamont, a Democrat, declined to weigh in on the bill and said the administration is reviewing it.

Bronin, Desegregate Connecticut’s founder, called the provision that allows towns to opt out of allowing homeowners to open even a granny pod a “poison pill” and “is the same backwards thinking that has allowed us to be so segregated and economically depressed.”

Her team’s research found that only half the residentially-zoned land in the state allows accessory dwellings without having to get special permission from local zoning panels.

Advocates worry that now that legislators have passed this bill, they will be unwilling to take on this contentious debate anytime soon.

“This bill actually may set us back, because there is a good chance it will be taken as the legislature’s answer to exclusionary zoning for years to come. It’s not an answer, it’s an abdication,” said Erin Boggs, the executive director of the Open Communities Alliance, a coalition of civil rights attorneys.

Her organization has already begun to pave a path to get the courts to weigh in on whether the state is violating various civil rights laws.

The courts may be the only solution to force change, said Erin Kemple, the executive director of the CT Fair Housing Center, a group of civil rights attorneys.

“It is possible that the courts are going to have to resolve the issues, because it is clear that regardless of the statutory requirements, a lot of towns are looking for ways to get out from under the requirements,” she said. “I think that many people in Connecticut embrace the nickname ‘the land of steady habits’ and lack an understanding of what is needed to ensure that all Connecticut residents have a place to live and have the opportunity to move and live in communities with high-performing schools and access to jobs.” A rundown on how each state representative voted on the zoning reform bill.

Do we really want the state controlling local government? Look at how well they run the state.

Shameful. CT makes it even worse adding insult to injury its sickening.

Who needs meaningful legislation when catchy slogans do the trick to show how woke you are?

Hate has no home here in CT and neither do poor people unless they want to cut the grass and clean the pool, but get out by sundown back to your blown out neglected cities with skyrocketing crime rates all thanks to this legislatures policies over the decades. When people try to define this concept of systemic racism they need look no further than our elected leaders who have created the very systems that collocate poverty, crime, and urban decay while maintaining virtual walls around their tony bedroom communities.

NOTE TO CITIZENS OF THE 137TH DISTRICT: Your State Rep may miss most committee meetings but he’s there to support those looking to destroy your home values. How in the world could someone representing the 137th sign off on more multi family housing…When your neighbor rents out his basement to Drum player with Harley Davidson who comes home from late light gigs remember MIA rep voted for that….OH…AND you voted for him.
Shame on you…

NOTE TO CITIZENS OF 143RD District — NOT to be outdone by MIA from 137, your very own Rookie Rep is giving you what you asked for…Looking forward to splitting those 2 acres zoning laws into multi family apartments. Don’t worry you get a do-over in 2 years.

Hi Jo. Thanks for pointing that out. Typo corrected.

ADU’s, explained In AARP’s excellent “Accessory Dwelling Units: A Step By Step Guide to Design and Development” ( https://futureofhousing.aarp.org ): “Homeowners may choose to construct ADUs for various reasons including as a substitute for nursing home care, a means to age in community, an opportunity to live with family members in multi-generational living arrangements as well as a source of earning extra income to supplement fixed incomes in their retirement years. In the AARP Home and Communities Survey, 2018, results revealed that 67% of adults age 18 and older would live in an ADU to be close to family, yet still live in a separate place.”

A town or city can have jurisdiction over the usage of the ADU when the homeowner applies for a permit to build. There will always be people who will take advantage of a situation, but for the most part, ADUs are a sensible way to care for or support close family or friends. My husband and I would love to add an ADU in order to be of help to several family members struggling as they age, as we all will do at some point. Beats isolation and poverty. Check out the link provided.

Step by step ” the arc of history bends toward justice”-MLK. I support the affordable housing bill and am glad our representatives voted for it.
I wish there were no opt outs because it’s time that the “white” towns share the school systems and amenities more equitably with our fellow nutmeggers who are raising kids and trying to build a better stronger country.

I hope Norwalk takes another look at its Zoning regs and let’s people build more accessory apartments and houses with neither minimum nor maximum sizes but a more flexible approach.

Throughout the US there is a movement for tiny houses meant to decrease resource use by increasingly common one person households. Many of Norwalk’s neighborhoods are filled with 3 and 4 bedroom homes with only one or two inhabitants. As long as the exterior aesthetics remain relatively unchanged, zoning should allow Norwalk resident single family home owners to retrofit their homes into multi-family. This way not only apartment developers but others can benefit from the rental income to support the property tax bills. Why should multi-family only be allowed for apartment buildings-this is such a 20th century development model?

The entire problem with underbuilding is *because* we allow towns to opt out. This should not be an option.