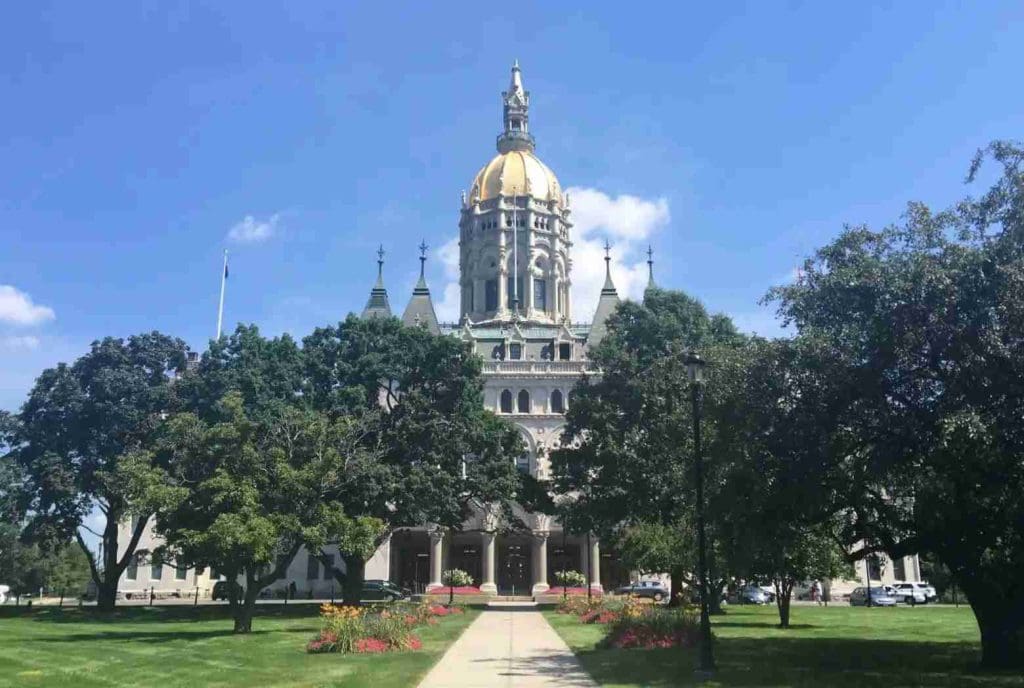 Connecticut is poised to deposit an extra $3.6 billion in its cash-starved pension funds when the fiscal year closes in June, after tax revenues surged yet again on Friday.

Those supplemental payments would be on top of the $2.9 billion in required contributions Connecticut made this fiscal year to pensions for state employees and municipal teachers.

Those projections were included Friday in the latest monthly budget estimates from Gov. Ned Lamont’s administration, which also forecast a $3.8 billion surplus for the current fiscal year.

While most of that projected windfall will help pay down pension debt, the remaining $200 million will be deposited into the state’s emergency budget reserve to keep it at its legal limit.

The rainy day fund, which cannot hold more than 15% of annual operating expenses, is maxed out this fiscal year at $3.1 billion. But because the next state budget boosts spending by about 6%, the rainy day fund can accept another $200 million once the new fiscal year begins in July.

The extra pension payments will come just one year after the state broke new ground with a $1.6 billion supplemental deposit into pensions.

But with $40 billion in unfunded obligations amassed over seven decades, Connecticut’s per capita pension debt is among the highest in the nation. Even with the supplemental payments, that debt is projected to place considerable pressure on state finances for another two decades.

Still, those supplemental payments are expected to drive down the minimum required contributions the state must make. Lamont has estimated that within the next few years those minimum annual payments could shrink by more than $400 million, freeing those resources for other priorities.

Surplus appears smaller, but in one respect it’s larger

Those extra pension payments largely were made possible by state tax revenues that have surged since 2018 and a new savings program begun around the same time that forces legislators to save a portion of quarterly income and business tax receipts.

Revenue projections, which have risen frequently during this period, jumped again Friday, even as the $3.8 billion surplus projection — at first glance — is down from the $4.8 billion cushion projected just one month ago.

Lamont and the General Assembly used more than $1.2 billion from that cushion to help support the new $24.2 billion budget for the fiscal year that begins July 1. That package includes more than $660 million in tax relief and significant new investments in child care and social services.“In addition to making groundbreaking investments in child care, crime prevention, environmental protection and caring for our most vulnerable, the budget that we just enacted provides relief specifically targeted for lower- and middle-income families with children,” Lamont said at a Thursday press conference to discuss tax relief programs.

Had Lamont and lawmakers not redirected those funds, the projected surplus would stand at roughly $5 billion — an unprecedented total that matches nearly one-quarter of the entire General Fund budget approved for 2021-22.

And while state income and business tax receipts count for the overwhelming bulk of that potential $5 billion surplus, the sales tax — boosted by inflation in excess of 8% — is generating almost $500 million more than originally expected for this year.

Despite state government’s flush coffers, Republican legislative leaders say Lamont and his fellow Democrats in the legislature’s majority missed an opportunity to help households and businesses that are hurting badly.

With a potential surplus of $5 billion, the GOP argues, the state could have provided more tax relief and reduced pension debt significantly — especially if some excessive spending was curtailed.

Republicans pointed to a package of raises and bonuses for more than 40,000 state employees approved by Lamont and the legislature’s Democratic majority earlier this year. The four-year deal, which includes 2.5% annual cost-of-living increases, a yearly step increment that typically adds another 2 percentage points, and one-time bonuses totaling $3,500 will cost the state an average of more than $460 million per year.

Democrats counter the raises and bonuses were essential to stem a major surge in state employee retirements this spring.

“Inflation is creating a windfall for the state budget,” Senate Minority Leader Kevin Kelly, R-Stratford, said Friday. “As families struggle to make ends meet, the state budget is benefiting from their pain. The right thing to do is return the overtaxation to Connecticut families.”

Positive news inasmuch CT has long been recognized as having one of the highest per capita unfunded pension debts in the nation. Such unfunded debts place burdens on future generations. One would have expected the nation’s highest per capita income State to practical exemplary public finance. Sadly not the case. But we do set the “gold standard” when it comes to rewarding our public employees – CT’s largest “industry”.
And the taxes required to maintain that “standard of fiscal excellence” helps explain why we’re just 1 of only 3 states with a decade long stagnant economy, employment level and population. But who pays attention ? CT voters seem satisfied with their governance.