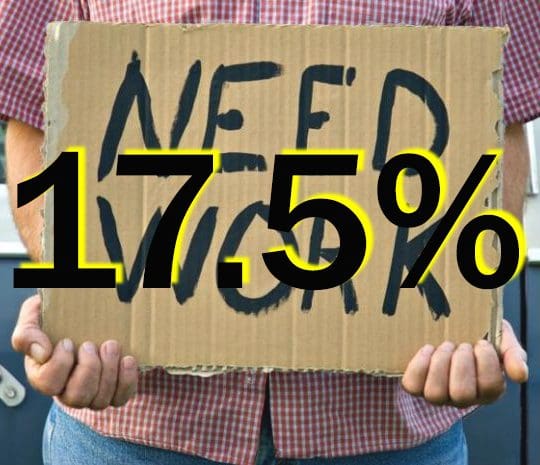 Connecticut’s labor commissioner said state unemployment is in the range of 17.5%, but not reflected in federal data.

HARTFORD, Conn. — Connecticut lost a staggering 266,300 jobs in April — the first full month of coronavirus-related shutdowns — more than double the positions lost in 22 months during the last recession.

And while the department officially must report a 7.9 percent unemployment rate — which is based on a U.S. census-based survey — flaws in that process mean the effective rate is closer to 17.5 percent, Labor Commissioner Kurt Westby said. The state reported a 3.7 percent jobless rate in March.

Connecticut lost nearly 120,000 jobs between March 2008 and January 2010, a period dubbed by many economists at “The Great Recession.”

More importantly, 288,400 jobs Connecticut has lost in March and April actually exceeds the combined unemployment caused by “The Great Recession” and the recession of 1989-through-1992 — the state’s two harshest economic downturns in recent history.

“I’m still trying to wrap my mind around these April job numbers,” said economist Donald Klepper-Smith of DataCore Partners. He said this easily wipes out the nearly 103,000 jobs Connecticut gained over the past decade in its recovery from the last recession.

“The damage wrought thus far has been both swift and massive,” added Klepper-Smith, who was the state’s chief economic adviser in the late 2000s. “Barring an immediate cure or vaccine for the coronavirus, this one-month job decline for April implies not only a harsh new economic landscape for Connecticut, but one that is apt to leave scars on the local economy and its residents for months and years to come in the same way that consumer behaviors were abruptly altered back in the 1930s.”

Joseph F. Brennan, president and CEO of the Connecticut Business and Industry Association, called for a “dramatic reshaping” of state government’s relationship to the business community.

“Hundreds of thousands of people are suffering and the best remedy we have is to find ways to get them back to work as quickly and as safely as possible,” Brennan said. “Let’s rebuild better and faster than other states.”

Leisure and hospitality businesses lost the most jobs nationwide, but all sectors of the economy experienced losses, as recession conditions that normally take months to develop happened in a matter of weeks.

Andy Condon, who heads the state labor department’s Office of Research, said all regions of Connecticut “were significantly damaged.” But the Bridgeport-Stamford-Norwalk labor market, where the coronavirus struck first, and southeastern Connecticut, where a major portion of Connecticut’s tourism and hospitality jobs are located, were hit the worst.

The state’s official unemployment rate is based on a local business survey conducted by the U.S. Census Bureau. But those survey results, which covers a one-month period ending in mid-April, “are way low” for several reasons, Westby said.

Census bureau staff could not collect any data in person, making the sample size particularly low, the commissioner said. There also were a “high degree of inaccurate responses” with many workers identified only as “sick” when they also had been laid off.

Condon said federal labor officials also acknowledged to their Connecticut counterparts that the 7.9 percent unemployment rate “does not represent what was going on in Connecticut.”

CT to accept applications for extended unemployment relief on Tuesday

Connecticut labor officials also announced that another form of enhanced federal relief for the unemployed should be available to residents here starting next week.

The state labor department will mail instruction letters Friday to an estimated 77,000 individuals who have been identified as “potentially eligible” to apply for 13 weeks of emergency, extended unemployment benefits.

These would be available through the Pandemic Emergency Unemployment Compensation [PEUC] program, a federal initiative that extends traditional 26-week state benefit coverage to a total of 39 weeks.

Deputy Labor Commissioner Dante Bartolomeo said department staff were hindered by a data processing shutdown that affected nearly all of state government this past Tuesday and Wednesday. But labor officials still expect Connecticut’s online benefits filing system — located at www.filectui.com — to be ready to accept applications for the federal extension program beginning on Tuesday, May 26.

“The pandemic has resulted in devastating effects for our families and Connecticut’s economy,” Westby said. “This extension of benefits will help people pay their bills and support businesses in our communities.”

Westby added that Connecticut’s unemployment trust fund likely will remain solvent through the month of May. But insolvency is not a crisis, and many states’ trust funds run out of resources during a recession, at which point they are eligible to borrow from the federal unemployment trust.

Connecticut, which has received more than 547,000 applications for benefits, and paid out more than $1.58 billion in benefits, has about $303 million remaining in the state’s trust fund.

The federal trust already has reserved up to $750 million Connecticut can borrow, Westby said, adding the state likely would need to borrow some — but likely not all — of those resources in June.