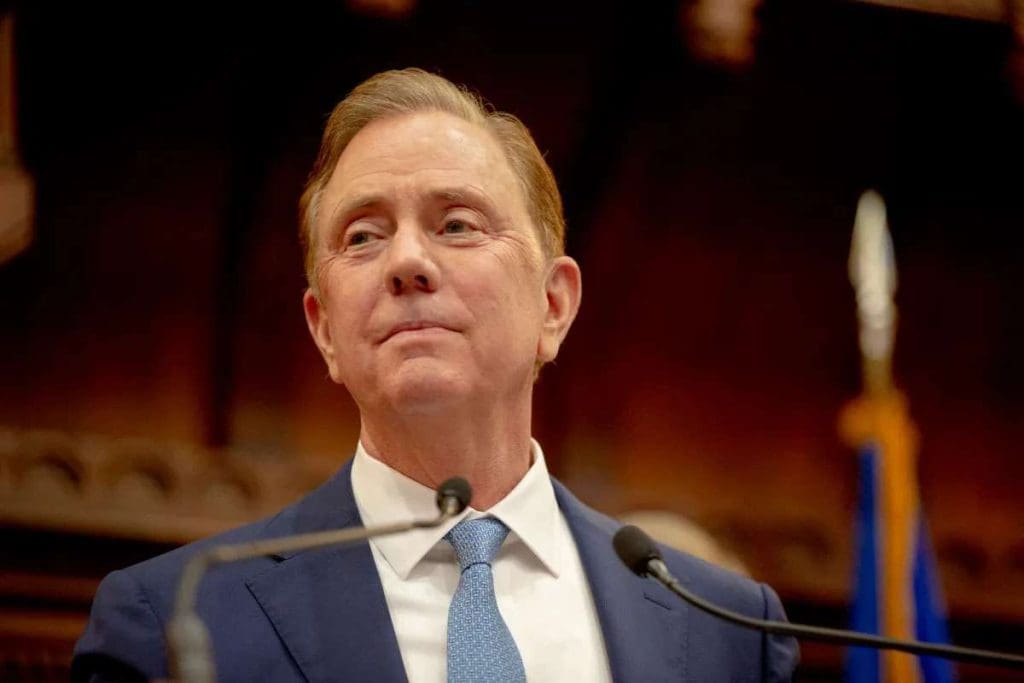 Gov. Ned Lamont is expected to recommend tax cuts for middle-class households and for businesses next month. (Yehyun Kim, CTMirror.org)

The consensus report also said surging income, sales and corporation tax receipts will give Lamont roughly $600 million in additional revenue to work with on Feb. 8 when he presents lawmakers with a new biennial budget — a package expected to recommend cuts both to income and business taxes.

“This revenue forecast will allow me to present a budget with a sustainable middle-class tax cut, pay down legacy pension debt, support education, child care programs, workforce development, new housing, essential social services, and public safety programs, as well as preserve the fiscal guardrails that have been so critical to our recent budget stability,” Lamont wrote in a statement shortly after the report was released.

Analysts increased their projections for the current fiscal year, which closes June 30, by $265 million on Tuesday. That increase, coupled with the $2.87 billion General Fund surplus the comptroller’s office estimated on Jan. 3, would leave a revised fiscal cushion of more than $3.1 billion.

That 14% surplus would be the second-largest in state history, topped only by last fiscal year’s $4.3 billion windfall.

More importantly, analysts are projecting the state’s biggest revenue engines will continue to surge during the next two-year budget cycle, despite an unstable global economy.

Lamont’s budget director, Office of Policy and Management Secretary Jeffrey Beckham, confirmed the good news but warned these projections only are designed to offer guidance and that the most crucial test of state finances is still months away.

State analysts from both branches develop “consensus” projections three times during the first year: in early November, mid-January and on April 30. The last forecast comes shortly after the state income tax-filing deadline and, traditionally, just before the General Assembly votes on a final budget.

“We are closely monitoring global, national and state economic forces that could positively or negatively impact the final state budget,” Beckham said. “Now is not the time for new unsustainable spending but rather continued sound fiscal management.”

Still, Lamont, his fellow Democrats in the House and Senate majorities, and Republican legislators all have unveiled preliminary agendas built on state tax cuts since the regular 2023 legislative session opened on Jan. 4.

The governor has said he wants to offer Connecticut its first income tax rate reduction since the mid-1990s. And while he hasn’t disclosed full details, he’s said it would be aimed at middle class households that earn less than $200,000 per year.

The administration also is considering a reduction in the pass-through entity tax, a levy paid by the owners of many small and mid-sized businesses who used to report their earnings through the state income tax.

Democratic legislative leaders already have said there is strong support among their members to expand the state’s Earned Income Tax Credit, which benefits working poor families, and to establish an ongoing child tax credit within the state income tax.

Analysts project sales tax receipts, which approach $5.1 billion now, will near $5.4 billion by 2025.

“This windfall of sales tax revenue is driven by the state’s high inflation on goods and services and shines a bright light on the financial burdens Connecticut families face daily,” Cheeseman said. “This underscores the need for the legislature to provide tax relief to state residents.”

The State Employees Bargaining Agent Coalition, which represents most major unions within state government, renewed its call Tuesday for Lamont to dramatically increase hiring within most agencies. More than 4,400 veteran workers stepped down between Jan. 1 and June 30 — double the normal total for a full year — to avoid more stringent limits on pension benefits that took effect July 1.

“We cannot continue to be two Connecticuts, one for the few very comfortable and wealthy, and the other for struggling middle and working class families, Black, brown and white,” the coalition wrote, adding that the state government workforce has shrunk by 20% over the past 20 years. “We cannot continue to woefully underfund our public services and let working families suffer while our state coffers continue to grow to outsized proportions.”

More smoke and mirrors. The reality is the state only keeps about 2 weeks of liquid cash on the books facing all the massive pension obligations we’ll never afford. While I don’t mind the state managing cash judiciously, paying down debts and investing (as long as we’re off the PR bonds fiasco we lost a few hundred million on), before anymore giveaways are contemplated, we should be paying back the Unemployment fund.

The abject failure to adequately fund the Unemployment system is costing businesses 7x what they should be paying in annual premiums. Highest in the nation. If the Governor really cares about tax relief, this is a no brainer to save CT businesses money instead of having to send it back to the feds.

THE HILL
America’s most popular and least popular governors
1.12.23

Kentucky Gov. Andy Beshear and Connecticut Gov. Ned Lamont were the two Democrats to make it into the top 10 on the Morning Consult list
https://thehill.com/homenews/state-watch/3811233-here-are-americas-most-popular-and-least-popular-governors/

POLITICO
Governors to voters: The state of our nation is bleak, except under me