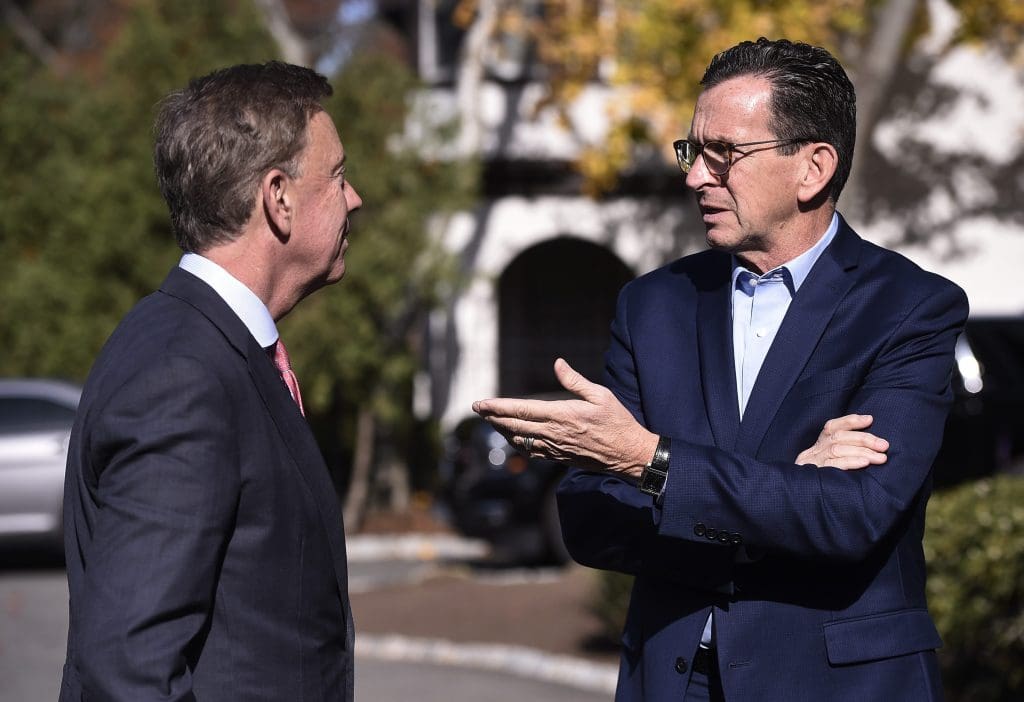 Since he took office 2 1/2 years ago, Gov. Ned Lamont has watched the cash pour into Connecticut’s coffers. Even a coronavirus-induced recession couldn’t stop analysts from forecasting big surpluses for the next two years.

But much of that good fortune is due to a tax system and other policies Lamont inherited.

Now, as another gubernatorial election cycle nears, the question looms: Who is responsible for Connecticut’s recent, relative budget prosperity?

“I didn’t expect that,” Lamont said of the billions of extra tax receipts that have poured in since he became governor. “I just knew that economic growth was the key.”

According to the Department of Labor, Connecticut is still down about 100,000 jobs from pre-pandemic levels, but state tax receipts have boomed regardless for two other reasons:

First, the stock market has largely defied the pandemic. The Dow Jones Industrial Average opened this week 35% higher than it stood on March 4, 2020, just before COVID-19 struck Connecticut.

Second, massive supplemental federal unemployment benefits left many jobless residents with more money over the past year than when they were working. And since much of those benefits are taxable, state income tax receipts remained strong as well.

That’s not to say Lamont has played no role in keeping finances in line. Pushing legislators to adhere to spending and borrowing caps, he has refused to tap state reserves during his first 30 months on the job. The rainy day fund has more than doubled and now exceeds $3 billion under Lamont, who also has channeled more than $1.4 billion in surpluses into the cash-starved pension funds.

And he’s frequently reminded lawmakers that the stock market, which has contributed greatly to the recent budget success, can turn on a dime.

“Bull markets, I guarantee you, always come to an end,” he said. “And this has been a long one.”

Malloy’s budgetary luck was the opposite of Lamont’s

But his good fortune — as far as state government finances are concerned — is undisputed, and pretty much the opposite of his predecessor, Gov. Dannel P. Malloy.

A Fairfield County Democrat like Lamont, Malloy came into office in 2011 with a state budget on pace for an unprecedented 18% deficit.

Put another way, a General Fund of about $18 billion — without adjustments — was projected to run more than $3.6 billion in the red.

And while Lamont started with $1.2 billion in the rainy day fund, Malloy began with an empty reserve, $1 billion in operating debt (left by Gov. M. Jodi Rell and the 2010 legislature ) and 9% unemployment — courtesy of the Great Recession.

Malloy took massive heat when he and the legislature enacted more than $1.8 billion in annual tax increases in his first year, one of the single-largest revenue bumps in state history.

This was compounded by the fact that actual tax receipts didn’t meet nonpartisan analysts’ projections during five of Malloy’s first six years in office as Connecticut muddled through one of the slowest recoveries in state history, according to records from the state comptroller’s office. 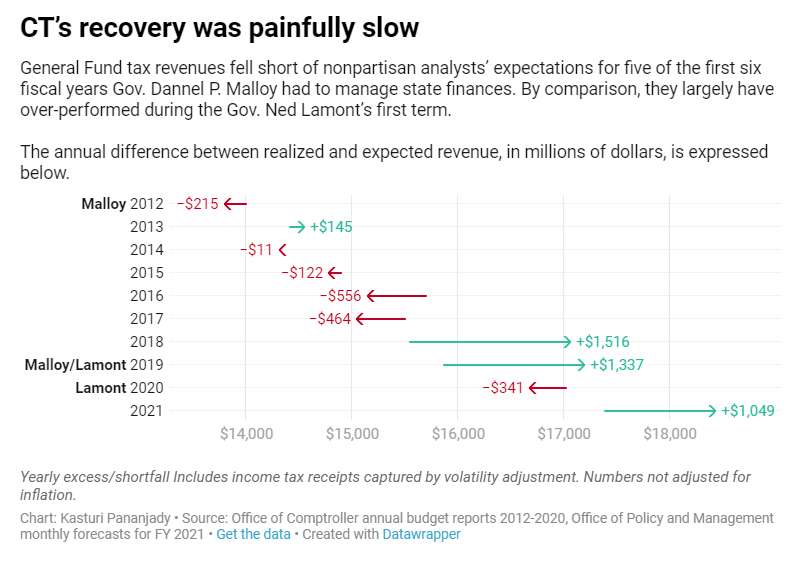 “It became somewhat of a shock to all of us,” said Hamden Democrat J. Brendan Sharkey, who was House majority leader and later speaker between 2011 and 2016. “There was a slow-moving realization that the Great Recession was like no other.”

The state’s unemployment rate wouldn’t dip below 5% until 2016 — a problem Malloy’s critics blamed on the taxes. But Connecticut hadn’t experienced any net new job gains since the 1980s, having failed for decades before to invest heavily in transportation, information technology infrastructure or cutting-edge industries. 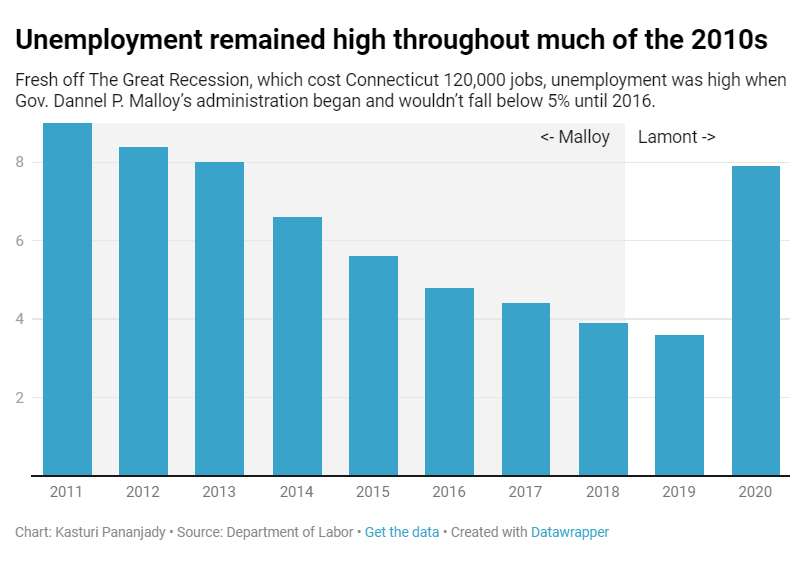 “Complacency was the name of the game from 1990 until 2008” and the Great Recession, said University of Connecticut economist Fred V. Carstensen. “We were coming off this period when we were fat and lazy and didn’t need to do anything. … We were The Land of Steady Habits, but a lot of them were bad habits.”

“I understood how bad things were,” Malloy said. “It was not a normal recovery. But did I expect it to take six years? No.” (After losing 120,000 jobs in the Great Recession, Connecticut had regained only about 90,000 by the time the pandemic struck in March 2020.)

A second round of major tax hikes was ordered in 2015 — despite campaign pledges from Malloy and from his GOP challenger Tom Foley that the budget could be balanced without more revenue from households and businesses.

“Who wouldn’t want an easy solution? But the reality is our problems are too big for easy solutions,” Malloy said. “I knew people weren’t happy. I didn’t run for office to make people happy.”

And while that second tax increase pushed Malloy’s limited popularity to a new low, it also completed the budgetary foundation that had been laid in 2010.

Since its inception in 1991, Connecticut’s income tax had largely been flat, taxing most earnings at 4.5% and then later at 5%. The legislature and Rell would tax earnings above $500,000 for singles and $1 million for couples at 6.5% starting in 2009 — but only for income above that threshold.

In other words, a couple earning $2 million per year only would pay 6.5% on the second million. The first million would still be taxed at lower rates.

Under Malloy, the income tax would become significantly more progressive.

It was expanded to include seven marginal rates, topping out at 6.99%.

More importantly, it included a “recapture” provision that ensures the wealthiest households pay the top income tax rate on all of their earnings — not on just a portion.

And when Wall Street began to finally rebound in a big way in 2018, the new rate structure pushed income tax receipts up quickly — even with sluggish job growth. That’s because nearly one-third of Connecticut’s income tax revenues come not from paycheck withholding but from quarterly returns — which are dominated by capital gains and other investment earnings.

But Republicans say those who focus closely on Malloy or Lamont to explain the currently flush budget situation are wrong.

“The [good] fortune has nothing to do with either one of the them,” said Liz Kurantowicz, a Republican political strategist.

Simply voting for tax increases or generating big tax receipts does not translate into budget success, she and other Republicans argue.

In fact, Connecticut’s history throughout the 1990s and 2000s is littered with fiscal problems despite many years of robust tax receipts.

State government ran up $6.1 billion in budget surpluses between 2000 and 2014, according to nonpartisan analysts. Only one-third of it, $2.1 billion, was placed in the budget reserve. The rest was spent — and none of those expenditures involved deposits into the pension funds to reduce debt in this area.

Why haven’t the recent surpluses been spent on new programs and on pet projects in lawmakers’ home districts? Republicans say the answer can be found four years ago.

The GOP hasn’t controlled the state House or Senate since 1996, but it had narrowed the Democrats’ lead significantly heading into the 2017 session.

And as liberal and moderate Democrats struggled for months — unsuccessfully — to reach a budget deal with Malloy, or amongst themselves, in 2017, the Republicans were brought in to craft a bipartisan package.

The GOP agreed, but also insisted that Malloy — whose popularity was waning — be excluded from the negotiations.

The longest-running budget debate in modern state history would wrap in late October with both parties backing a new budget — and a provision that’s become known as the “volatility adjustment.”

This mechanism forces the state to save a significant portion of income tax receipts tied to investments earnings, which can fluctuate greatly from year to year. Since its enactment, that volatility adjustment has taken $4.1 billion in potential spending out of the legislature’s hands.

“We were taking the good times for granted,” said House Minority Leader Vincent J. Candelora, R-North Branford. “Very frankly, Gov. Lamont has been the beneficiary of that bipartisan budget.”

Sen. John Fonfara, a Hartford Democrat, spearheaded the push for the volatility adjustment.

But North Haven Republican Len Fasano, who was Senate Minority Leader in 2017, said it was the GOP that used its leverage to ensure not only the savings provision, but newer-and-tougher caps on spending and borrowing were enacted.

“It’s amazing what it has done for the state,” Fasano said. “It’s very satisfying to see that, because it shows, with a bipartisan deal, what can happen.”

New Britain Democrat Joe Aresimowicz, who was House speaker from 2017 through 2020, said Republican recollections are skewed, and many from both parties fought for the fiscal reforms that made a big difference in 2017.

“We [all] made the tough choices and it was always while hoping we would come out on the better side,” he said. “It was the most challenging, frustrating but rewarding and satisfying thing I’ve ever done in my entire life.”

Governor Lamont and the Republican legislators get the credit. Connecticut tax-and-spend Dems only know how to spend and tax, not make money.

Dig deeper and you’ll see this year’s surplus includes more stealing from the transportation fund. It seems they are intentionally trying to bankrupt that so as to create a crisis that will require tolls or other whacky mileage taxes.

Let’s be real. Huge tax increases taking money out of the earner’s pockets and HUGE pandemic deficit handouts by this federal legislature on the backs of the workers of today and the future are what is kept the state from digging itself into a deeper hole.

A “Little Bit of Luck?” How about a lot of luck!! There is NO question Socialists (in my opinion) have opened the exit doors to many businesses and workers to come to Connecticut. To those with a Math background the pension obligations are still a huge problem. To those with any foresight at all the reality of Fun Money from Washington drying up in 2 years will create a myriad of problems for Norwalk and Connecticut. Programs which are being implemented now with Fun Money will be pushed to continue without DC support. We’ve bailed out Hartford to the tune of $500 Million a few years ago and New Haven is now also on that gravy train.
So….No the state should not be misleading the public about the good times. I just drove home from Rhode Island yesterday. It seems like we’ve run out of paint for Overpasses. Is that a sign of a prosperous state??

Progressing to tyranny and servitude. Stupidity and evilness.

Malloy did his best drive this state into insolvency. He has nothing to do with the current surplus. The only reason the man has a job in Maine is because of his “deal” (with hundreds of millions of public debt) for a UConn lab.
John Rowland might have a higher approval rating than Dan Malloy!
Several of the posters above are absolutely correct. When the Trump/Biden giveaway money dries up, this state will be in serious trouble.
In the meantime…party on!