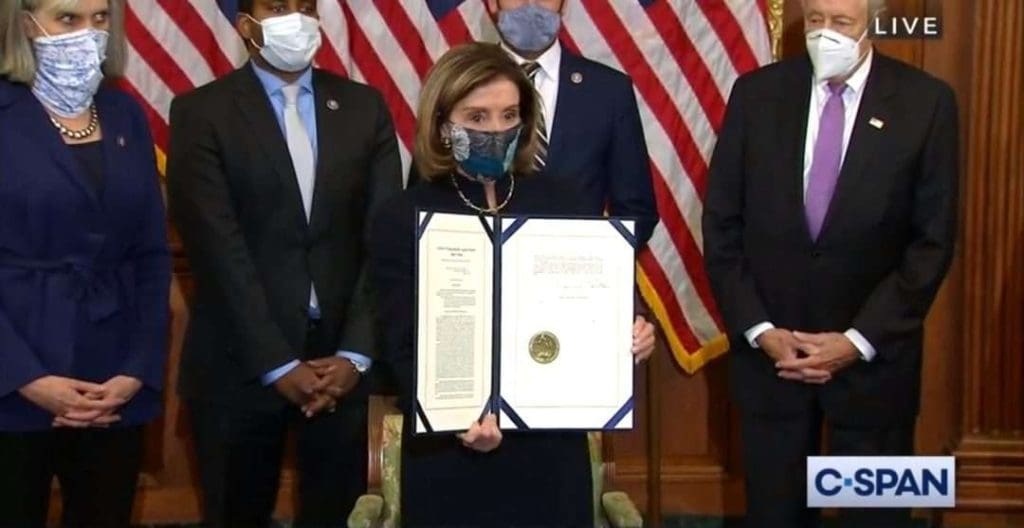 Speaker of the House Nancy Pelosi signs the Article of Impeachment on Wednesday, Jan. 13, 2021.

The vote Wednesday by the U.S. House of Representatives to impeach President Donald J. Trump for inciting a violent insurrection at the U.S. Capitol came as lawmakers in state capitals like Hartford digested briefings on the threats that may await them.

Connecticut’s five House members, all Democrats, joined in the 232-197 vote to impeach Trump for a second time, a first in U.S. history. Ten Republicans crossed the aisle to vote with 222 Democrats.

The vote came exactly seven days after a pro-Trump mob occupied the Capitol, briefly stopping Congress from certifying President-elect Joe Biden’s election, and seven days before Biden is to arrive at the same Capitol to be sworn in as the 46th president of the United States.

On the floor, U.S. Rep. Jim Himes, D-4th District, urged Republicans to imagine how their votes will be seen in coming years, not in the hothouse of cable news and social media. He suggested they consider their oaths, reflect on their legacies and think about the final judgment of their relationships with Trump.

“Where he goes in history, you go in history,” Himes said. “Unless, today, you make a stand.”

Himes was in the House gallery, seated above and behind the speaker’s rostrum, when the mob overwhelmed Capitol police unprepared for an assault that had been planned in plain sight, on the internet in chat rooms and on social media.

The Article of Impeachment says Trump instigated the assault:

“Shortly before the Joint Session commenced, President Trump addressed a crowd at the Ellipse in Washington, DC.  There, he reiterated false claims that ‘we won this election, and we won it by a landslide.’  He also willfully made statements that, in context encouraged – and foreseeably resulted in – lawless action at the Capitol, such as ‘if you don’t fight like hell, you’re not going to have a country anymore.’ ” 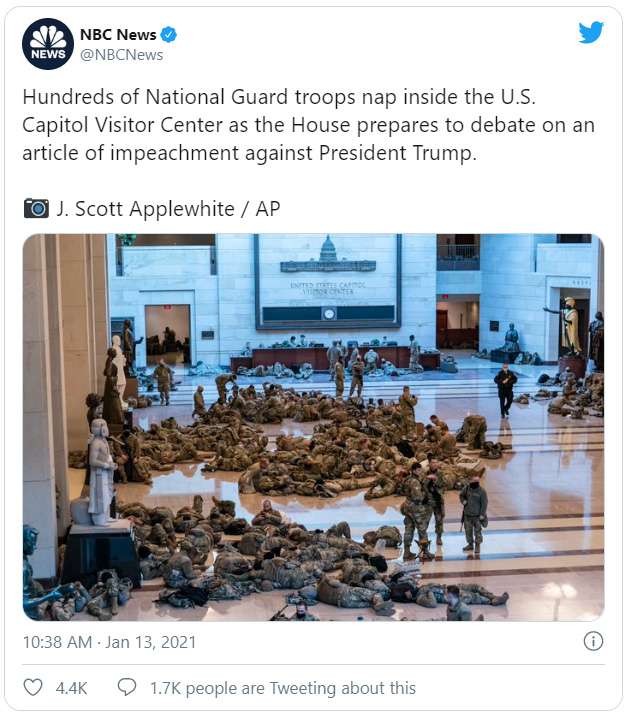 Arriving members of Congress found that armed National Guard troops had slept on floors throughout the Capitol. Sturdier fencing already had been installed.

In Hartford, the governor’s chief of staff, commissioner of the Department of Emergency Services and Public Protection, and the adjutant general of the Connecticut National Guard briefed the six top leaders of the General Assembly on preparations to protect the state Capitol and other government buildings.

House Speaker Matt Ritter, D-Hartford, and House Minority Leader Vincent J. Candelora, R-North Branford, already had decided on one safety measure: A House session scheduled for Jan. 20, the day of the inauguration, would be held on Jan. 14.

Protests by Trump supporters have been promised Sunday at every state Capitol, and the briefers told lawmakers that their belief is Hartford will see demonstrations. Security is being increased at a number of facilities that officials declined to identify.

Earlier, Ritter marveled at the timing of the assault on the U.S. Capitol, just hours after a peaceful demonstration by a variety of protesters at the state Capitol, where the House and Senate convened outdoors to take the oath office, a precaution against COVID-19.

The virus is now a distant concern. Ritter says there will be no more outdoor sessions.

The impeachment debate in Washington went forward, as did smaller matters of state politics and politicians. Republicans tried to assess the sudden resignation of their state chair, J.R. Romano, a steadfast supporter of the president.

More routinely, Democrats elected Nancy DiNardo to another term as their state chair.

Gov. Ned Lamont briefly surrendered his gubernatorial powers to Lt. Gov. Susan Bysiewicz. While the Republican president was being impeached, the Democratic governor underwent hip replacement surgery in Stamford. By nightfall, he was home in Greenwich.

At 4 p.m., the state Department of Public Health posted its daily COVID update: another 3,529 cases, another 87 deaths. 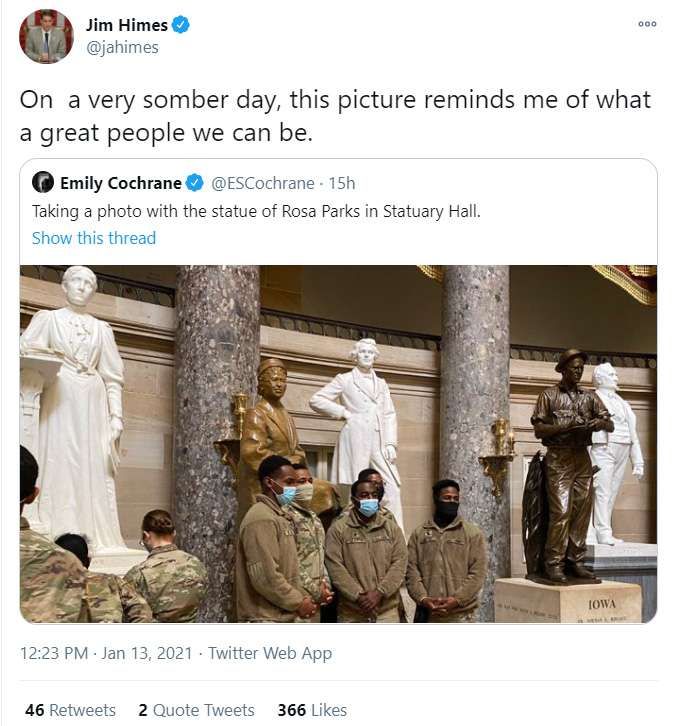 Marianne Clark of Avon, a member of the Republican State Central Committee, made calls to help a friend, Thomas Becker, to gauge support for his candidacy for state chair.

Only when asked did she mention the impeachment. She is a supporter of the president, and she is troubled by the effort to remove the president so close to the end of his term.

She said she believes the president won the election, that Biden was the beneficiary of fraud, and that it was Antifa, not Trump supporters, who were responsible for the violence. Clark said she knows the FBI and other law enforcement agencies say that is untrue.

U.S. Rep. Jahana Hayes, D-5th District, perhaps thinking of the Republican distrust about what happened last week, quoted Liz Cheney of Wyoming, the 3rd-ranking House GOP leader and one of the 10 who voted to impeach, in explaining her own vote:

“The president of the United States summoned this mob, assembled the mob, and lit the flame of this attack. Everything that followed was his doing. None of this would have happened without the President. The President could have immediately and forcefully intervened to stop the violence. He did not. There has never been a greater betrayal by a President of the United States of his office and his oath to the Constitution.”

U.S. Rep. Joe Courtney, D-2nd District, said in a statement that the facts are clear.

“There is no question that the president helped to foment and incite an attack on our Capitol and our democracy on January 6th, and representatives from both sides of the aisle came together today to show that there are consequences for these sorts of actions,” Courtney said.

Rob Simmons, the Republican unseated by Courtney in 2006, no longer has the floor, not in Congress. There are no Republican voices in the Connecticut delegation. In 2006, three of the five were in the GOP.

Simmons still likes to debate, but now it’s only on talk radio. He’ll be on with Lee Elci on WJJF in the morning. On Wednesday night, he offered a preview: He finds the current level of Republican discourse empty, an endless demonizing of Democratic bogeymen.

Good riddance to Romano, whom Simmons says had only two or three talking points: Trump was always right, Democrats were always bad, and any Republican who disagreed was a RINO with no place in a tiny GOP.

“Every time I get a fundraising letter, it’s ‘We’re for Donald Trump, and we’re against the bogeyman,’” Simmons said.

But if still a member of Congress, he would have been with the 197 Republicans who voted against impeachment, not the 10.

Simmons counts himself among the skeptics about who really committed the assault on the Capitol, even if most those arrested were found to be Trump supporters.

“They were anarchists. They were professional protesters,” Simmons said. “The FBI knows it, and a lot of people down there know it. It was a disgrace.”

Chris Shays, the last Republican from Connecticut to serve in the House, would have voted as did Himes, the Democrat who unseated him in 2008.

Shays said he would have preferred that Vice President Mike Pence and the cabinet remove Trump by invoking the 25th Amendment. But once Pence declined, impeachment was the only option.

“This was sedition,” Shays said. “This was an attack on democracy.”