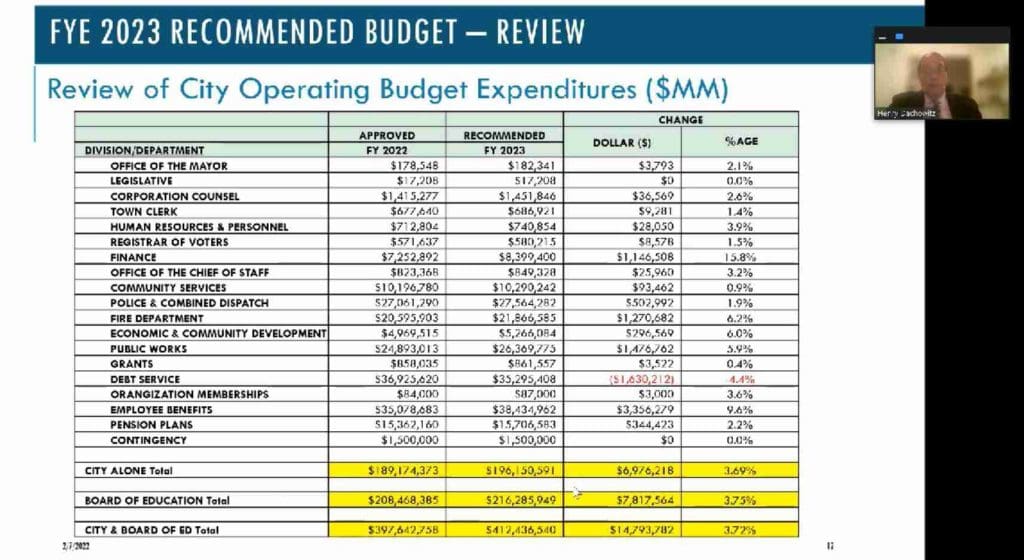 NORWALK, Conn. – One City department stands out in Henry Dachowitz’ recommendation for City spending: his own.

The Finance Department would get a 15.8% increase in the proposed operating budget that Dachowitz, Norwalk Chief Financial Officer, has prepared in collaboration with Mayor Harry Rilling. That’s significantly more than any other department.

“That Finance Department is just out of control with a 15.8% increase. Let me explain what that is. I have about seven departments reporting to me, and each needed certain investments,” Dachowitz said Tuesday.

The Norwalk tax assessor will be doing the annual five-year revaluation in October 2023, Dachowitz said. While that’s beyond the June 30 end of the Fiscal Year now being budgeted for, the expenses will come in earlier.

“He has other professional services, hiring these outside assessment firms to help us with the reval, for $650,000,” Dachowitz said.

Norwalk is the last Connecticut municipality to use Munis and is going to shift to Quality Data Systems (QDS), which more than half of the state’s local governments use, at a cost of $132,000, he said.

Tax Assessor William Ford has asked for $40,000 to hire an auditor to audit business personal property returns, “and generally that kind of investment comes back in a multiple of revenue,” Dachowitz said.

Purchasing Agent Sharon Conners is using Bonfire “to automate a lot of the processes, starting with a request for quotations, an RFP,” Dachowitz said. “When we do the purchase orders, all the way to paying the bills very automated, because of this new software.”

The number of RFPs and RFQs have tripled in the last three years while the staff has remained the same, three people, Dachowitz said.

“She’s asked for an additional purchasing manager, which we agreed to,” he said. “Also she’s in charge of Central Services. So for purchasing, $100,000 for the salary line, and $45,000 because the telephone bills are going up.

About $81,000 in additional funding is recommended for the Comptroller’s office to hire data entry staff because “there’s just still so much that’s manually done,” Dachowitz said. “We keep trying to automate.”

Tax Collector Lisa Biagiarelli plans a tax sale in August or September of 2023 and about $65,000 in expenses will be incurred in this fiscal year, Dachowitz said.

“The IT department, a lot of pluses and minuses $60,000… We keep getting recommendations that we should do more, and we need the resources to expand that,” Dachowitz said.

“And in the management of budgets department, there was an increase of $56,000 for a budget analyst,” Dachowitz said.

Coming in second for amount of increase is employee benefits at 9.6%.

“No surprise, the biggest component is health insurance,” Dachowitz said.

While the estimate at this point is a 11.5% increase for health insurance, the City’s estimator is known to deliver “very high estimates” and the numbers might drop as budget season progresses, he explained.

As for the rest of the City-side, “Looking at these increases, they really aren’t so horrible,” Dachowitz said.

“When I look at the numbers, the increase is overall very reasonable,” Dachowitz said. “And I think we’ve just gotten a message through the department heads and chiefs. When they submit their recommended numbers, and we have our discussions with them, they play it straight, they know we’re not going to stand for the fluff. But if they make a good case that they need the resources for better services, we try to accommodate them. And that’s how we got to the recommended budget.”

The presentations mark “just the first iteration” of the budget, Rilling said.

“We know that this has been a very, very difficult time,” Rilling said Tuesday. “We’ve said it over and over again, we have people who have lost jobs, people who have been unable to make payments on their home or to pay for their energy or trying to buy food and different things. And we also have young children who have been suffering in their schools by having to involve in remote learning and actually being out of school for quite some time. And we need to attend to all the issues that are present in our community. And that’s what we’re trying to do with this budget. We try to be fair and equitable, so that we can fund properly, the different things that need to be funded, but also do it possibly so that we don’t overtax our citizens, but don’t under serve our children. And it’s a very delicate balance that we have to strike.”