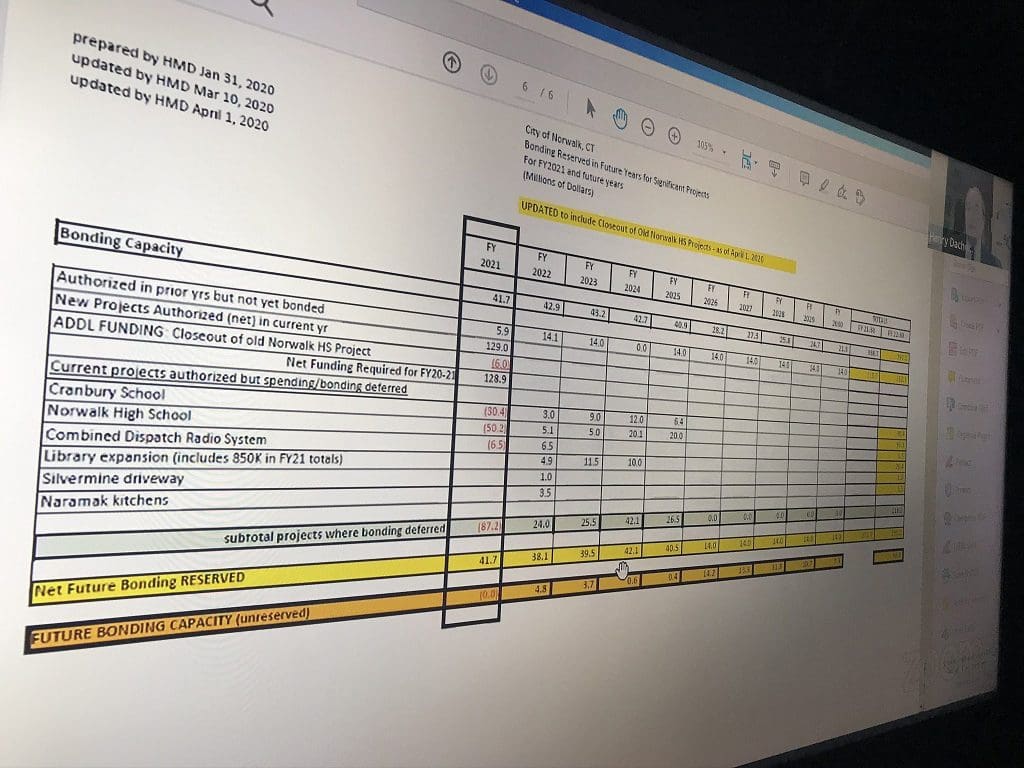 NORWALK, Conn. — Norwalk has committed to too much borrowing to fund infrastructure improvements, according to Chief Financial Officer Henry Dachowitz. City leaders need to reexamine the authorized capital budget projects and make some tough decisions.

“Finance is like a balloon; you can only stretch in a couple of directions. And if you pull on one side, you have to accommodate on the other,” Dachowitz said Thursday to the Common Council Planning Committee in its virtual meeting.

The Committee went on to send the proposed 2020-21 capital budget to the full Council for a vote Tuesday. The decision was 4-1, with lone Council Republican Tom Keegan as the dissenter. Barbara Smyth (D-At Large) recused herself.

Included in this proposed budget is $50.3 million to build a new Norwalk High School, although the total price is estimated at $225 million, according to the budget document. The project hinges on 80 percent reimbursement from the State by qualifying the new school as a pilot program. State Senate Majority Leader Bob Duff (D-25) has said that the special legislation needed will pass, though this comment predates COVID-19.

You can’t file a grant application without having at least the City’s share of the project authorized for bonding, Norwalk Public Schools Chief Financial Officer Thomas Hamilton said. There are hurdles to overcome due to COVID-19, and the legislature hasn’t put the project onto a priority list.

A few weeks ago, Duff suggested that the legislature will try to pass that legislation during a special session, perhaps in June or July, Council member Tom Livingston (D-District E) said.

“Other than that, we’re all just sort of moving forward and we’ll see how it goes,” Livingston said.

“I inherited a whole bunch of authorized projects that were not bonded yet. And what I learned is there’s a disconnect, a timing disconnect,” said Dachowitz, who began work as Norwalk’s finance chief just over a year ago.

Spending is authorized but the bonds aren’t issued because the Internal Revenue Service has strict rules that the funds must be spent within three to five years, so the authorizations sit unused until the projects are ready to begin construction, he explained. Norwalk has

“In essence, it’s a little bit of using up our future borrowing capacity with today’s authorizations,” he said, citing the $13.5 million expected to be authorized this year for  Norwalk Police combined dispatch as an example because it’s expected that half will be used this year and half the following year.

With Norwalk High School, the design work would be bonded this year and the construction would begin the following year and continue, so the borrowing would be done over several years, he explained.

The City’s outstanding debt is about $260 million and “in discussions with our financial advisor and analyses, we have determined approximately $400 million is the limit we can borrow and still maintain a triple A bond rating.”

The net to be bonded this year is $129 million, if the budget is approved Tuesday.

Every year, some of the debt is paid off so it’s OK to add more, making room for about $20 million more a year, Dachowitz said. But for the next five years the budget is adding about $40 million a year with the plan to reduce that to $14 million yearly in Fiscal Year 2026 and keep it at that level. So at the end of the decade, Norwalk will be where it needs to be.

“All of the authorized projects have used up five years of borrowing capacity,” he said. “Consequently, what really needs to be done is an examination of all those projects that have been authorized in the past, authorized this year, authorized in future years, and tough decisions have to be made.”

You could say certain projects won’t get done, other projects will be slimmed down and others will be slowed down, he said.

Or, you could give up your Triple A bond rating.

Livingston asked, “So you’re saying that even something like our typical $5 million annual paving budget is problematic?”

Dachowitz didn’t give a yes or a no, though he did say he was also “shocked” when he looked at the numbers. He delved into the reasons for the expensive school construction projects, that the schools were long ignored. But, while “schools are a great investment,” the “authorized but not yet bonded” figure of $118 million needs “to be reexamined, especially after COVID.”

If the grand list grows after the recession, some of the benefit can go into capital projects in a “very dynamic complex interrelationship,” he said.

“I’m here to be the early warning system,” Dachowitz said. “Think about it.”

The city finances were just fine. I do agree, however, we need an early warning system.

We need one for when Bob Duff decides to stand up for us to the tune of 225 million for the new NHS that no one needed or asked for. He was hatching these plans in secret at the same time we were pouring millions into the existing NHS. He knew all of this as a member of the schools council and let us waste the money anyway.

We need an early warning system for the plethora of unfunded mandates that get piled on year after year after year. Bob Duff’s legislation over the years has cost Norwalk tens of millions of dollars. The one positive from the virus is they weren’t able to pass even more of these this year, like the one that mandated we put free women’s hygiene products in the boys bathrooms.

After the full financial impact is understood by the state, there will be no money for NHS, so don’t worry, we’ll never have to issue debt on for that $53 million. To arrive at this years current one billion dollar deficit, the comptroller is still working under the assumption that state revenues will only fall $300 million for the last 4 months of the year. This represents 5 days of revenue for the state. The real deficit is going to be more like 3 or 4 billion, unless they use all of the rainy day fund at once. There will be no appetite to bond for capital projects when bonding will be needed to cover the operational deficits. Or town and state aid will need to be cut, since we know the Governor isn’t going to lay off one state employee or forego their 5.5% raise this year.

Several years ago, when the Common Council first approved the BOE’s five-year facilities upgrade, the city knew it would exceed certain debt ratios — such as per capita debt, or the level of debt service in the operating budget — but received approval from our financial advisers because we had a plan to bring those ratios back to acceptable limits within a five-year period. We never in our wildest dreams anticipated an additional $50 million being authorized for a new high school within that timeframe.

Mr. Dachowitz is correct. Difficult adjustments will have to be made or the city could lose its critically important AAA bond rating, which controls the level of interest we pay for large construction projects. For the record: Norwalk high school was not deemed a top priority by the BOE’s consultants, nor by the members of the BOE.

An issue that also needs to be carefully examined as the city moves forward is the actual operating expenses associated with the new high school… with its much larger enrollment, possibly including students from nearby towns. Those expenses will have an immediate impact on property taxes.

I have a crazy idea

Shelve a new HS created by our open boarder policy

Cut overall spending by 20%. Include wage freezes and zero based budgeting for staffing. Renogotiate contracts wherever possible.

@Non Partisan is spot on as we drag this “flattening the curve” exercise into month #3. The Governor effectively killed the economy for 4 whole months by closing schools down for the rest of the year. But this isn’t even the beginning of the pain. The bloodbath in corporate is coming and coming quickly. The work from home model is quickly going to shift to No work from home followed by no opportunities to enter the workforce as these corporations that our state government hates will go on, just no where near the northeast. The city is going to need to hire armies of foreclosure lawyers to collect its revenues if this doesn’t turn around quickly.

I see on Channel 12 that Stamford is making drastic cuts to their budget. The piece featured Terry Conners ice rink. We can’t have our local government run like bloated government. While many working people are not working and many who are have taken pay cuts, I wonder what the paychecks look like for our government leaders

Bryan Meek and Bruce Kimmel ,in my humble opinion are spot on!