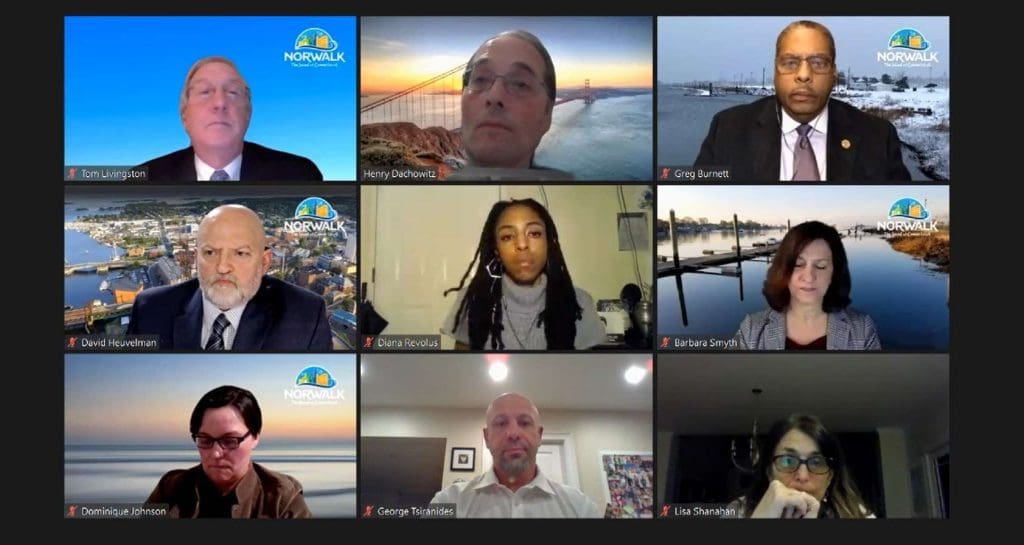 NORWALK, Conn. — Henry Dachowitz continued pointing a frustrated finger at the Board of Education as a primary reason for Norwalk spending Tuesday, telling Common Council members that if you count City expenditures made for the Board then the schools are responsible for 60% of Norwalk’s budget.

Some late breaking good news: The Board’s estimate for its health insurance cost hike took a $4 million shave Tuesday due to new information from a consultant, according to Dachowitz, Norwalk’s Chief Financial Officer. It looked like the City would save $750 on its side of the health care equation, but, “We won’t have confirmation these numbers after the budget cap has been set in March or April,” Dachowitz said.

Dachowitz is recommending the City only fund $4 million of the $11 million increase Norwalk Public Schools had asked for in the coming year’s budget, based partially on the expected health insurance cost increase.

The district’s health insurance costs were expected to increase by $6,053,909, or 51.7 percent of the overall $11.7 million increase. In December, NPS Chief Financial Officer Thomas Hamilton said consultants had preliminarily projected an 8 percent increase in costs in addition to the State increasing its premiums for its plan.

Norwalk Superintendent of Schools Alexandra Estrella and the Board of Education Executive Committee released a statement Tuesday pushing back on Dachowitz’ Monday characterizations of their budget. While Dachowitz devotes part of his presentation to detailing recent BoE staffing increases, the statement points out that this was partially due to efforts to decrease high school study halls. Also, improving Special Education services has produced overall financial savings.

Both efforts were highly publicized.

The Board also pushed back on Dachowitz’ description of the reasons why a firm hasn’t yet been chosen for the efficiency audit it agreed to in June, just before Estrella came onboard.

On Monday, Dachowitz said a six-person Committee, including representatives of both the schools and the city, was very close to selecting four finalists in December.

“It was then determined that because Dr. Estrella was new to the schools, that we put the RFP on hold,” Dachowitz said. “And we are working diligently now to refine the details. And I am hopeful that we will be able to select one of the firms in the next several weeks by the end of February.”

“We were just about ready to make a selection and it was determined that because Dr. Estrella was new, and was not part of that agreement at the end of last year’s budget cycles, and we took a pause to bring her up to speed. And I am hopeful that by the end of this month. In the next few weeks, we’ll be able to select our firm and move forward on this efficiencies (study).”

“The City launched an RFP this fall without input from the NPS or the Board of Education,” the statement from Estrella and BoE leadership said. “The RFP omitted the District as a key party, and did not include an equal review of functions for both the City and District.  For example, the RFP included a review of educational technology resources, but left out a comparable up-to-date analysis of City technology resources.”

You can read the full Estrella/BoE statement here.

Dachowitz pointed out that the efficiency audit stemmed from “the record 5% increase, or $9.9 million” approved for Norwalk Public Schools last year.

He has recommended a $400 million 2021-22 operating budget, including a 6.1% increase on the City-side and a 2% increase on the education side if you take the figures at face value, without his calculations of City expenditures on behalf of the Board of Education. 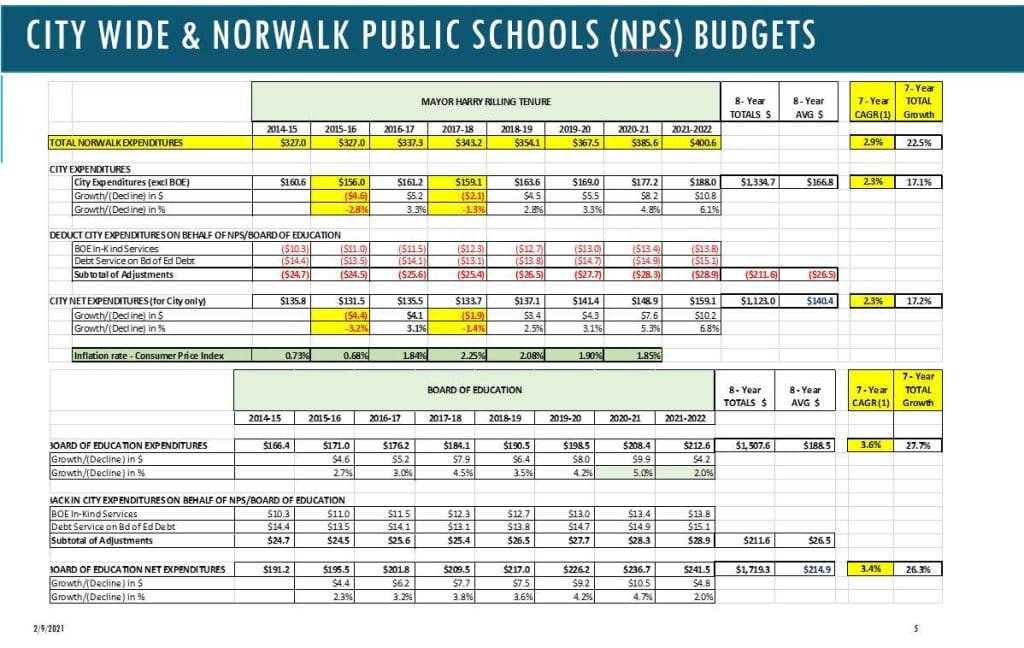 “Connecticut State law prohibits a City government like us from reducing the school budget below the prior year total. It only goes up never goes down. I’ve worked in many private corporations and non for profits. I’ve never seen a restriction like that. It’s very hard for fiscal restraint,” Dachowitz said.

Dachowitz came here from Michigan, where he served as Wayne County Chief Financial Officer for 15 months before accepting the Norwalk position in April 2019. His 40 years of experience as a finance professional before that included four years as Treasurer of Nassau County, N.Y., where he led a nationally-recognized financial turnaround in 2002-2006.

“We are hopeful that with President Biden’s intent to issue $2.1 trillion of aid, we would expect significant 10s of millions of dollars to come to the Board of Ed on the school side and millions to come to the city. Hope is not a strategy. But we’re at the point where the bill may be get may get passed, and the money will trickle down to us. So it’s not just hope,” he said Monday to the Board of Estimate and Taxation.

“As the Mayor said, it’s a very tough budget,” he said Monday. “There are a lot of pressures on us. And to me, it’s balanced and fair. I compare it to what people say about a good negotiation, which is where everybody goes away, a little unhappy. So if everybody’s a little unhappy, and they’re only angry at me a little, then I’ve done my job well.” 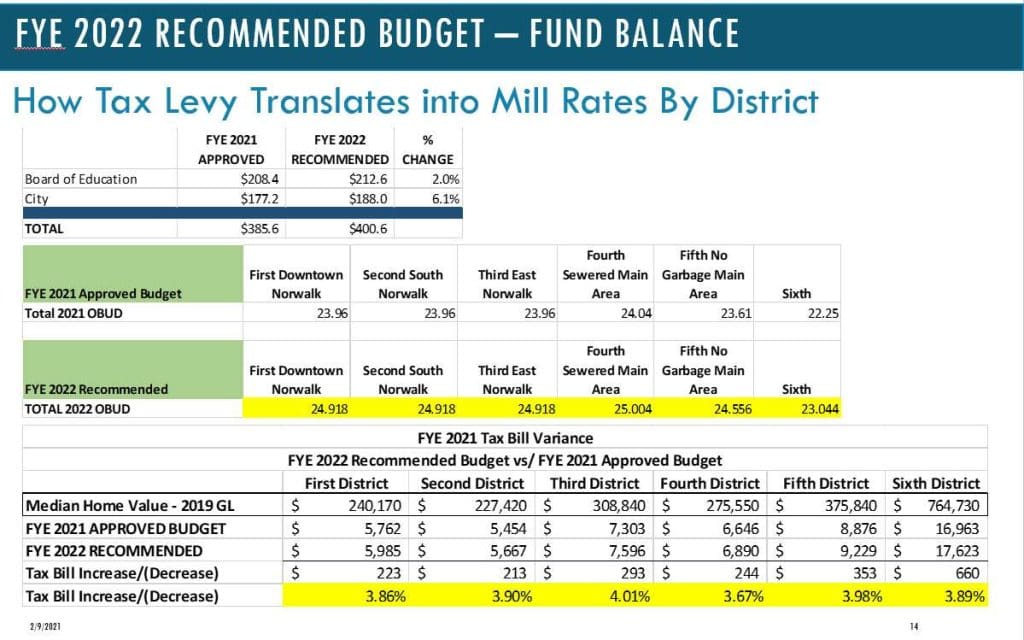 I guess we’re all just supposed to forget about years of significant underfunding due to 1000 extra children pouring into the system under Sanctuary Harry’s watch and welcome. Besides completely ignoring the per pupil expenditure data, who needs real facts when the goal is to have an enemy and a scapegoat to campaign against to fool people into thinking you were helpless about the entire situation.

What’s really incredible is here we are nickel and dimeing operational expenses this year at the same time we are spending $300 million in taxpayer money on a school building no one really needed while ignoring the MASSIVE operational expenses that building will bring to the district. If we can’t afford health insurance for our existing group now, how are we going to afford an entire new regional school. Maybe Duff will get us another 0.25% increase in our ECS funding to offset the massive tax increases homeowners will face to educate a few dozen out of town children?

Note to Henry: Take no crap from anyone!!
Note to Board: I have one question: The $ 4 Million dollars shaved from Health Care increase — You mean to tell us that NO ONE had any inclination this might be in the works? Something smells rotten. I don’t know if it’s a timing issue or a lack of diligence in obtaining that information timely. Either case is a travesty. My paranoid side tells me this continues to be a cat and mouse game. With MY tax money at stake. I for one would like to know why this wasn’t known to some in the administration sooner. We pay a lot of money to a lot of people to have that information — WHY didn’t we have it sooner. I’m very disappointed and someone should be held accountable. My question is WHO?

Would love to see Harry or the Board of Ed release the statistics for ELL’s in Norwalk Schools. doesnt take a rocket scientist to figure out that the costs for ELL’s were, and probably still are, the fastest growing cost for the BOE.

The one problem facing Norwalk and many other cities is the aspect of being a sanctuary city. Of course, in today’s environment, I’d be hung from the town green gazebo for being a “racist”. It would be nice to se a full accounting of the population of this city legal and illegal. A surrogate for the growth would be looking at the number of ESL staff from 10, 15 years ago and compare to now. What’s really said about this demographic shift is that it further adds to the challenges of our young black kids and families. I guess that doesn’t matter to many even politicians in the democrat party

@JO. Having gone through this 5 times before, I can tell you that NPS has to start off where the actuaries think we could end up. They can’t forecast what games the state 2.0 plan will play to avoid political heat come April. Nor should they. What should alarm anyone is the hostility being displayed by one side here ignoring the policies put into place that increased the student population 10% in a few years. NPS didn’t do that and the current arguments are misleading and worse disengenuous.

Mr Meek, can you please explain your “$300 million” reference?

Actual taxpayer, you can watch tonight’s BOE Finance Committee meeting to get a sense of those numbers. But, a reminder that by law we must offer MLL programming to our students who qualify. That is not a “nice to have”, it is mandated. And we need to stop politicizing children and their education.

@BMM. The new NHS will cost well over $300MM and most of us pay state taxes, so you can stop the gift horse chatter. You haven’t even forecast OpEx for the new building no one asked for, while getting skewered on this budget request. And just wait until your utility bills double in the next few years.

Barbara Meyer-Mitchell… Aside from not understanding how @Actual Taxpayer’s comment is an example of, “we need to stop politicizing children and their education,” I’d like to know if you consider yourself as someone who has been doing exactly what you’ve suggested. I touched on the obvious politicization of the Board of Education in a letter to you and the Board earlier this week. You’d allowed our electioneering State Senate Majority Leader’s Hartford agenda, box checking regionalization high school project, which overrode your BoE procedures, to go through, while cutting the parents completely out of the conversation. That politicized stunt is now resulting in what knew it would, though Bob Duff campaigned that it absolutely would not, which is cannabilizing funds for urgent, crumbling infrastructure and basic necessity repair projects on the Facilities Master Plan. You administer a cringeworthy community page where you and others clearly push local political agendas. You’ve allowed a mayor appointed, rather than elected, individual, who is, as we learned during the last mayoral election, Bob Duff and Harry Rilling’s henchman who has no problem playing dirty politics, be your Board of Education Chairman. I didn’t even get a chance to vote this individual out. Now if all that I’ve listed are not examples of politicizing children and their education, then I don’t know what are. Barbara Meyer-Mitchell… Do better by my children.

@Mimi — #1) Barb Meyer Mitchell is a good person and I think she adds to the NPS equation
#2) That being said, I agree with everyone you wrote.