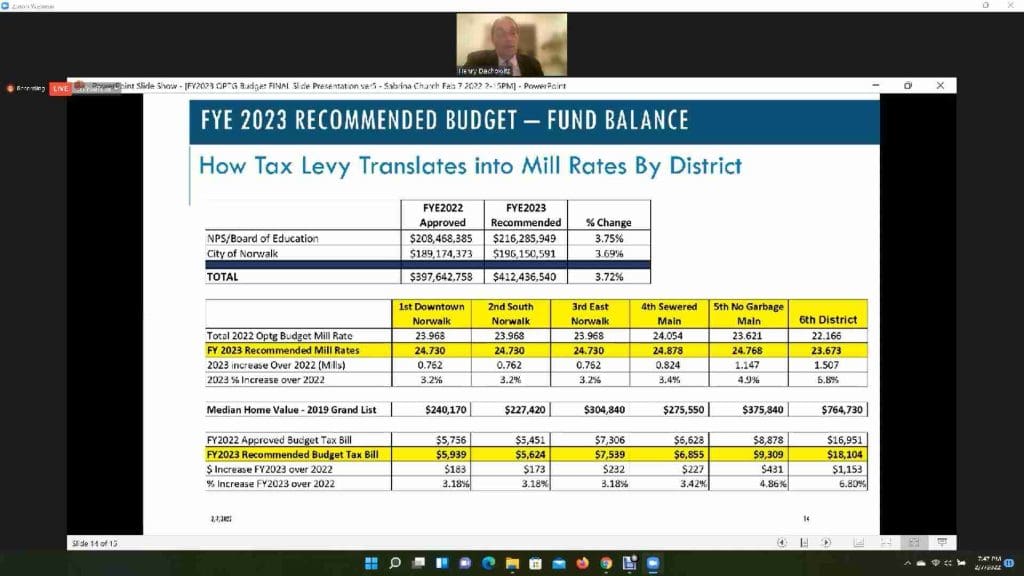 NORWALK, Conn. – The initial recommended operating budget for the coming fiscal year has been revealed, a proposed $412.5 million in spending that represents a 3.7% increase over 2021-22.

Norwalk Chief Financial Officer Henry Dachowitz’s recommended budget, developed in concert with Mayor Harry Rilling, proposes $216.3 million for Norwalk Public Schools, which he called a 3.75% increase over this year. The Norwalk Board of Education has requested $227.5 million, which included $7.8 million to attempt lessening the “dramatic increase” that could be necessary in 2023-24 when the COVID-19 federal funding dries up, according to NPS Chief Financial Officer Lunda Asmani.

“The budget we put before you, we believe is a fair budget right now,” Rilling said at Monday’s Board of Estimate and Taxation meeting. “But there’s still room, we’re still looking at areas where we can make savings, where we can cut expenses, because we recognize the fact that we can’t keep taxing our residents to a point where they can’t afford to stay in their own homes.” 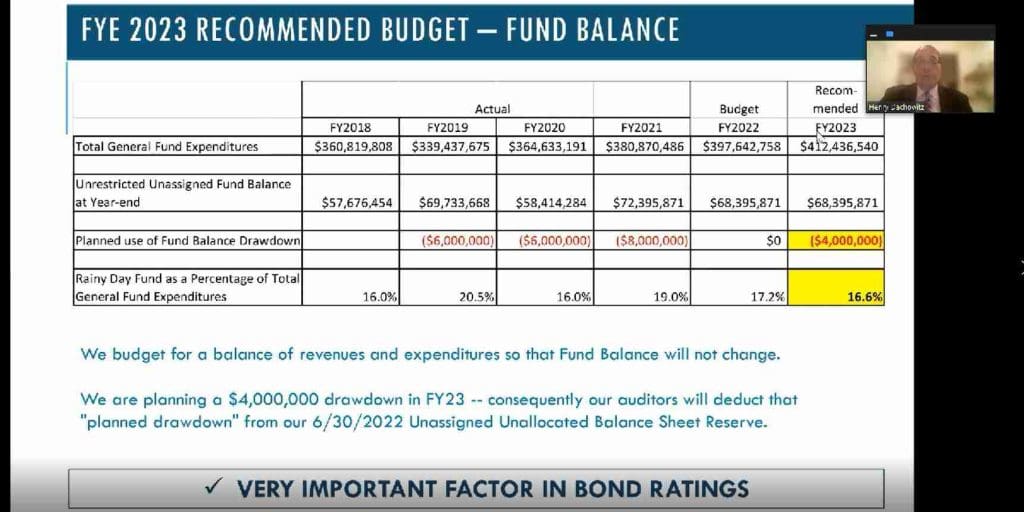 The budget factors in a $4 million drawdown from the “Rainy Day Fund,” the general fund balance, estimated at $72 million at the close of the last fiscal year. The drawdown would still leave a Rainy Day Fund equivalent to 16.6% of operating expenses, Dachowitz said. This is an important statistic for rating agencies.

Norwalk has a policy that its Rainy Day Fund should be between 7.5% and 15% of expenditures.

“I don’t like having a ceiling,” Dachowitz said. “I will tell you in the Northeast, 15 to 20% is considered sterling or golden. In talks with the rating agencies, they say in the rest of the country, the Midwest, the South, the far west, they see Rainy Day Funds in 50 to 75% range…. I’ll take it, the 16.6% But I guard it jealously.” 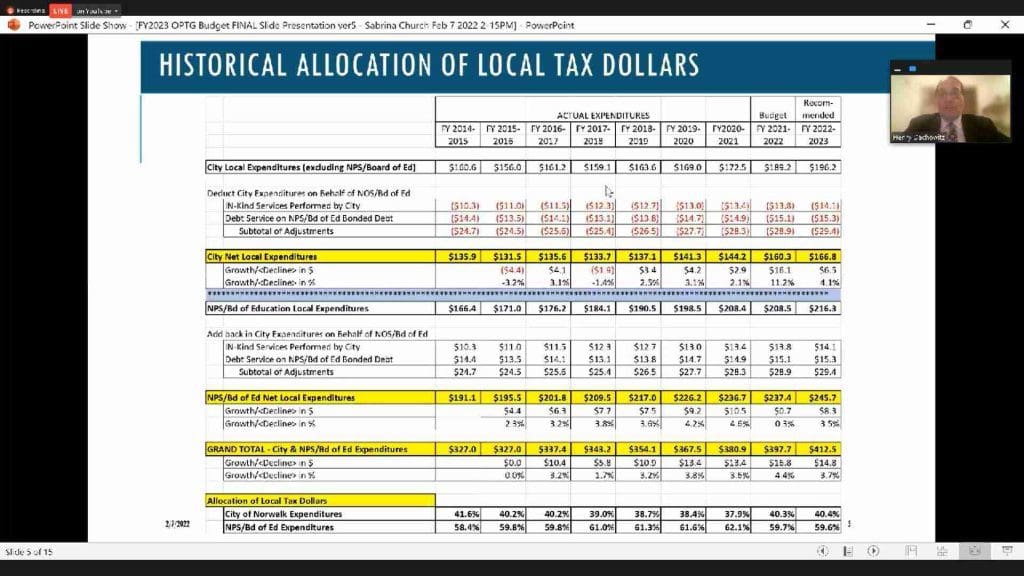 Dachowitz spent a fair amount of his presentation issuing sharp comments about the Board of Education.

In FY21, the Board of Education had a budget of $208 million but spent $204 million, Dachowitz said.

“What they do is, by law, if they run a surplus of 2% of their budget and they request it, we have to give it to them, and they end up using it as a rollover for next year,” Dachowitz said. “So they work backwards. They say we have 208; 4 million we’re allowed to rollover. They only spent 204 million. If they spent less than that they would have to give that money back to us. That never happens.”

Norwalk Public Schools has a $2.7 million surplus for 2018-19. NPS was permitted by state law to retain $1.9 million of its surplus and was returning $805,297 to the City, then-NPS Chief Financial Officer Thomas Hamilton said at the time.

As he has in previous budget cycles, he added up the “in-kind” services the City gives the Board of Education, and the total dollars in debt service the City-side budget coughs up.

All told, in FY21 NPS spent nearly $95 million in excess of the local budget, Dachowitz said. 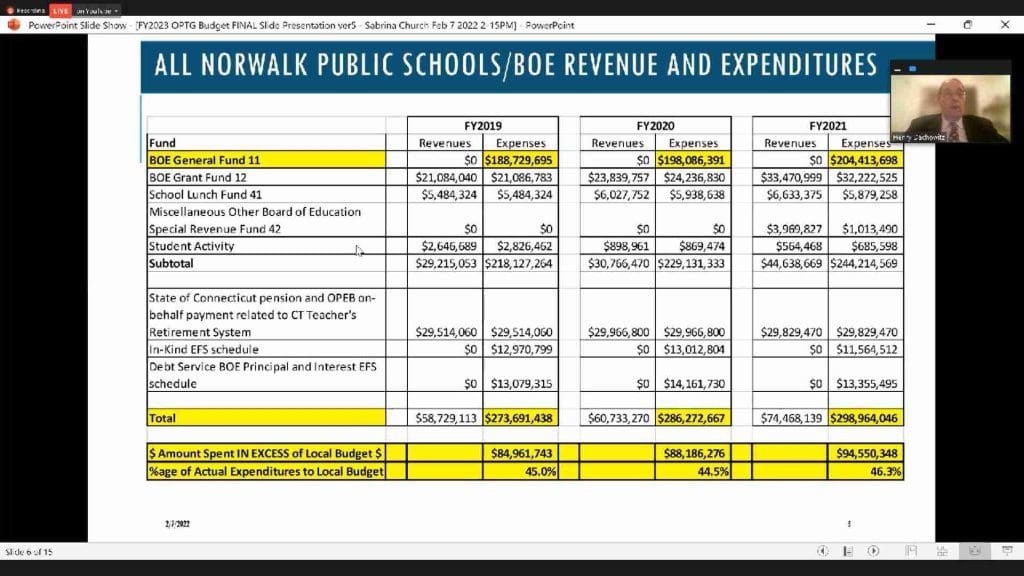 The schools got $24.8 million from the American Rescue Plan and the City got $39.3 million, he said.
“Tremendous amount of money,” Dachowitz said. “It really helps us a great deal in recovering and reimbursing us for certain expenditures, and with the ARPA monies to invest wisely, to improve the city.”

About one half is or is going to be used to reduce general tax increases to taxpayers, Dachowitz said. That’s $13 million in this fiscal year and about half that in the recommendation for the coming year.

If revenues are higher or expenses lower, more ARPA money can go to the projects the City has lined up to do, Dachowitz said.

NPS and the City have funded an efficiency study that looks at the operations of both sides of the equation.

Dachowitz said the efficiency study results will be presented in time to be factored into the coming budget.

“I have to say, having been a management consultant earlier in my career, I’ve been very impressed with the professionalism, the thoroughness. They’re asking the right questions,” he said. “…We can use the information we learn in the study to help us make better decisions regarding the budgets this year.” 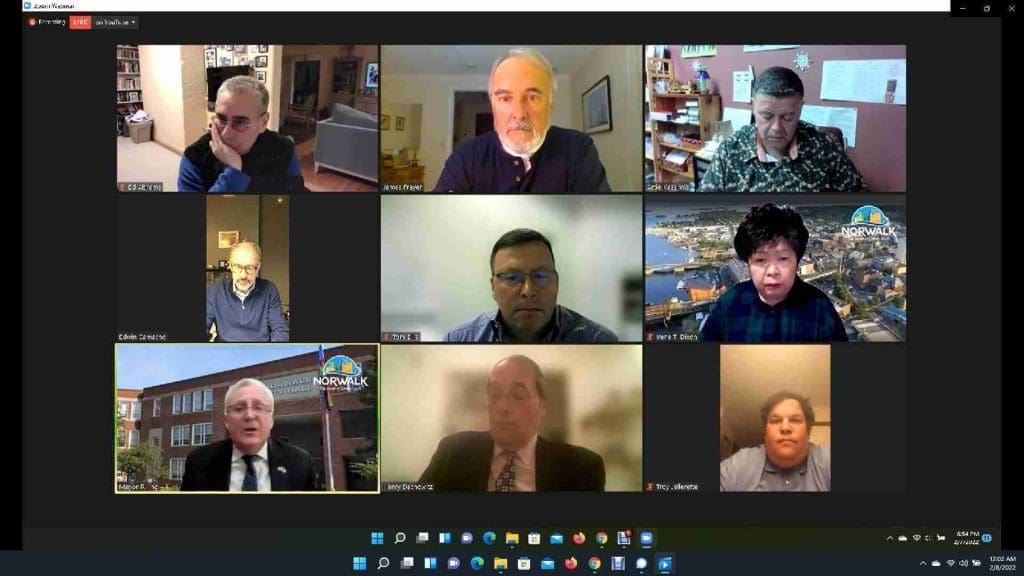 The Norwalk Board of Estimate and Taxation meets Monday on Zoom. At lower left is Mayor Harry Rilling.

“I plan on doing the same thing this time around,” he said Monday. “And I will give them so much credit because last time, some of them found not only the .5% …they found more.”

He said, “The budget you see right now will look a little different when we’re coming out on the other side with a final budget recommendation for approval for this board, for a cap recommendation from the Common Council…. It’s our job to look at this budget and find out where we might be able to make some more cuts someplace, we’ve got a few things that we can shift around. And so as I said, it’s a work in progress.”

I hope Mr. Dachowitz’s confidence in the Efficiency Study is well founded.
I have never forgotten when I was in the Army and was told to order new waiting room furniture for the dental clinic. When I replied that we did not need new furniture I was told if you don’t spend the money your allocation will be cut next year. When I still refused, the furniture was ordered for me. That’s the kind of budgeting and efficiency that just keeps expenses rising systemically. We need to encourage savings without punishing the savers with lowered allocations!

Are you listening to the mayor’s words BOE

” because we recognize the fact that we can’t keep taxing our residents to a point where they can’t afford to stay in their own homes” or is it business as usual?

Why hasn’t the city installed an independent watchdog to monitor salaries and a top heavy administration staff.

Clearly one does not need a Harvard education where cost saving can be achieved . . . cut cut cut.

The annual budget discussion period allows citizens the opportunity to express their views on how City officials provide services. Its a fair assessment that over recent decades City Hall has provided good quality public services. But for our public schools, absorbing about 70% of our City’s budget, the story is very different. Most of our school grads are failing to meet Ct Education Dept standards. Nor do most secure 4 college degrees. Yet our BOE matches salaries of surrounding school systems with national reparations for excellence. And then advertises our distress with highest paid Supt in CT.

Giving major budget increases each year to our public schools reinforces the notion that Norwalk residents are unconcerned about our public school’s inability to educate our children to conventional CT standards. That surely sends the wrong message. If we want better results we need a 2 pronged approach. First, hold the budget fixed to express our displeasure. Second, demand from the leaders of our One Party City to solicit the services of City residents with backgrounds and talents comparable to the high standards of BOE service traditionally found in our surrounding towns. Our surrounding towns leaders vigorously encourage their most capable citizens to volunteer on our BOE. Norwalk’s leaders have different expectations. Comparing resumes says all that’s needed between our standards for BOE service and surrounding towns. Our surrounding towns have much higher standards for BOE service and requirements.

There’s nothing more important for our City officials to do than secure high standard public schools. Not paying high salaries but meeting CT Edu Dept standards and securing college degrees for our kids. Budget time is a good time to express our severe disappointment with our BOEs. They’re not educating our kids properly. Doubters can pull down the CT Edu Dept website and ask why we can’t do better. Giving more funding to the BOE doesn’t improve student achievement. That just gives out higher salaries.

Raising student achievement requires a BOE committed to that goal with the abilities and backgrounds required for the task. Our surrounding towns are deeply proud of their public schools. We spent comparable monies but remain deeply disappointed. So at Budget time lets send a message to our BOE. “Do your job that you were elected to do”. And explain why we have CT’s highest paid Supt.

Mr. Dachowitz seems to be a pitbull, and I say that in admiration of his ability to see through the ridiculousness of the board of education’s demands and to hold his ground, unintimidated by the complaints about the “financial cliff.” The superintendent climbed the cliff and now she wants the city taxpayers to keep her and her NYC friends up there.

If the mayor is truly concerned about the taxpayers’ pocketbooks, he won’t dig too deeply into the rainy day fund because a true rainy day, even a rainy year or more, may oneday arrive.