A Marc D’Amelio tweet, the day The Norwalk Hour wrote about the lawsuit he filed against the City of Norwalk and journalist Nancy Chapman. 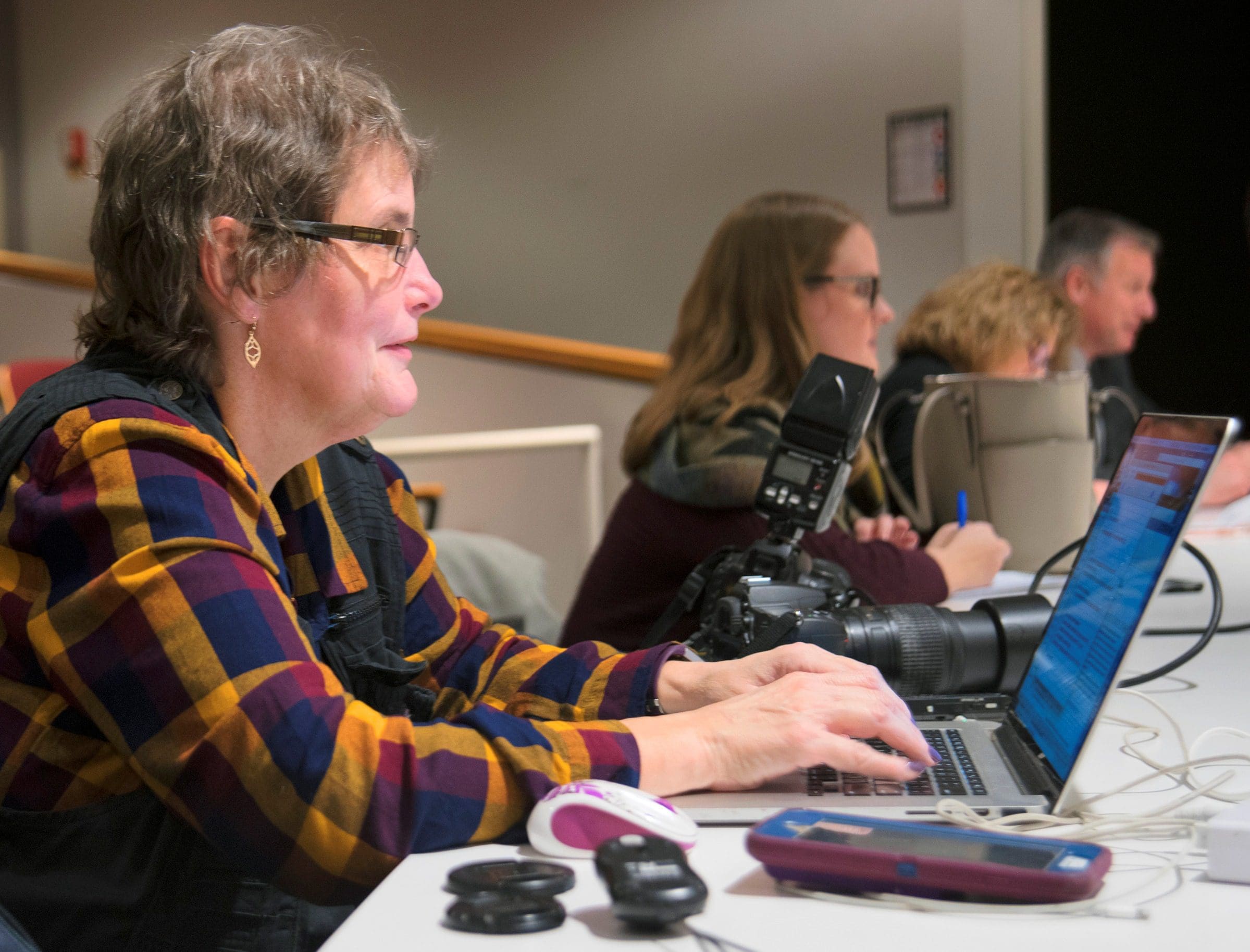 NORWALK, Conn. — A lawsuit brought by unsuccessful state Senate candidate Marc D’Amelio against journalist Nancy Chapman was withdrawn Monday by his attorney, before a judge could rule on a motion that could have obligated D’Amelio to pay the cost of Chapman’s defense.

D’Amelio’s lawyer, Robert Serafinowicz, told Stamford Superior Court Judge Alex Hernandez that he withdrew the claim due to a conflict involving his expert witness, without whom he could not proceed.

The lawsuit stemmed from an October report by Chapman detailing D’Amelio’s 2014 DUI and child endangerment arrest, expunged in 2016. Although neither D’Amelio nor his attorneys identified any inaccuracies in Chapman’s report, they filed suit in November, alleging intentional/negligent infliction of emotional distress and false light invasion of privacy. 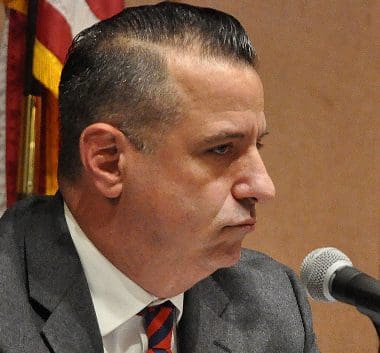 Chapman’s attorneys responded with a special motion to dismiss under Connecticut’s 2018 anti-SLAPP statute, designed to provide for fast dismissal of frivolous lawsuits filed in response to the exercise of First Amendment rights.  SLAPP stands for Strategic Lawsuit Against Public Participation.

If granted, the motion to dismiss would have obligated D’Amelio to pay for Chapman’s defense. Since D’Amelio dropped his claims before the judge took up Chapman’s motion, the judge did not address whether her attorneys are entitled to an award of defense costs. Chapman’s attorneys said Tuesday they are reviewing options to recover costs.

“The Connecticut Anti-SLAPP law was enacted to cut off precisely this sort of vindictive litigation brought to chill speech, and the new law had its intended effect here,” said Yale law student Kelsey Stimson, who was part of Chapman’s legal team.  “We are pleased with the prompt withdrawal of the claims, but this case should never have been brought.”

“All (Serafinowicz) had to do was find another expert,” Neigher said.

“When they’re not disposed to find another expert who’s not conflicted out, that kind of tells you what they think of their case.”

Serafinowicz did not respond to a request for comment. 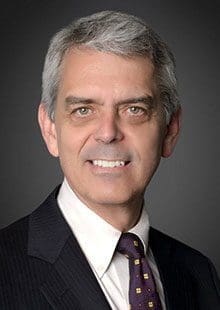 Chapman credited the outcome to “a pro bono legal dream team” led by David Schulz and Bill Fish, Jr., supported by Yale Law School’s Media Freedom and Information Access Clinic (MFIA).  Schulz, who supervises the MFIA, has been named a top First Amendment lawyer by “Best Lawyers in America” for the past 18 years, and has successfully defended The New York Times, The Associated Press, The New Yorker, and now NancyOnNorwalk.

Fish, a Hartford-based First Amendment expert, has successfully represented the Hartford Courant for more than 30 years. He was assisted by associate Alexa T. Millinger.

“I am very grateful for their efforts,” Chapman said.

Yale Law School’s MFIA supervising attorney John Langford spearheaded the preparation of a 30-page brief in support of the motion to dismiss D’Amelio’s suit, contending that all of D’Amelio’s claims against Chapman were frivolous, and were barred by Connecticut’s “fair report” privilege, which shields individuals from liability when they accurately report information obtained from public records.  Even if the claims against Chapman hadn’t been barred by the fair report privilege, they would have failed under Connecticut state tort law, and would, in any event, be covered by the First Amendment, the memorandum states. 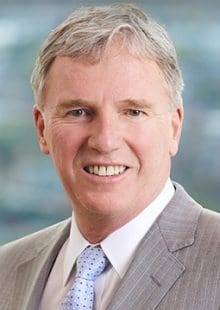 Schulz said in a statement that the MFIA clinic’s mission is to provide pro bono assistance to independent journalists who lack access to the legal services available to large media organizations.  “This baseless claim threatened to put NancyOnNorwalk out of business.  Representing Nancy to ensure that she can continue to report on Norwalk government is what we exist to do.”

Fish said he took the case pro bono because “local, dedicated journalism – especially not for profit – is an incredibly important resource.”

Chapman, founder of nonprofit news site NancyOnNorwalk.com, based her story on a copy of the arrest report that was mailed to her anonymously. When she contacted D’Amelio for comment, his attorney threatened to sue, stating incorrectly that publishing details of the expunged arrest would constitute libel.  Chapman verified that true statements cannot be libelous, and published her story Oct. 9.

According to the arrest report, Norwalk police stopped D’Amelio at 2:30 a.m. on South Main Street for driving erratically, and observed his 9-year-old daughter in the front seat and three passengers in the back who D’Amelio professed not to know.  He told police that he had been distributing casino winnings to teach his daughter generosity, and would fail a sobriety test because he had Parkinson’s.  He failed a field sobriety test, and two subsequent breathalyzer tests.

D’Amelio lost the election to State Sen. Majority Leader Bob Duff (D-25) by a margin of 63% to 37%.  His suit against Chapman claimed more than $15,000 in damages, and contained numerous demonstrably false statements.

D’Amelio’s suit also named the City of Norwalk as a defendant, charging that its police department conspired against him by intentionally releasing details of his expunged arrest.  The arrest report the police provided to Chapman was heavily redacted, with no details of the DUI and child endangerment offenses.  She based her story on the mailed report. On Monday, Serafinowicz said he would refile a negligence suit against the city.

Chapman thanked the competing Norwalk Hour for its support, which included a column by Matt DeRienzo, Hearst Connecticut Media vice president of news and digital content, that described D’Amelio’s lawsuit as frivolous, and Chapman as a “serious journalist who works diligently to bring information to light for the public.”  An Hour editorial likened D’Amelio’s decision to sue to that of a “sore loser and bully” and noted that it would be difficult to find a more committed journalist than Chapman.

Asked what’s next, Chapman replied: “We can all move on. I was confident I had done the right thing and I’m very thankful that learned people in the legal profession stepped up to defend journalism. I’m also thankful for the support we received from the community.”

Bob Welsh is Chair of the nonprofit NancyOnNorwalk’s Board of Directors.  NoN is a member of the Institute for Nonprofit News (INN).

Alleluia! This is not just a win for Nancy Chapman, but also a win for journalism and a win for America.

Today in Norwalk, we can at least be comforted by knowing the court system has sided with traditional American values that millions have fought and died for.

With Trump and the Republicans packing federal courts with narrow-minded ideologues and political hacks who support corporate interests and religious fanaticism, that will affect all of us for generations, we have to wonder how long that comfort will last.

I can’t wait for the Russians to convince me to vote for Trump again.

Congratulations Nancy. The lawsuit never should have been brought.

Lost in this news are two points that anyone – affiliated to any political party or not – should be concerned about. The first is how the courts provided fair and legal protections for Mr. D’Amelio – identical for anyone else who found themselves in similar situations. Those judicial protections were shown utter indifference. Further – no one seems to ask just “who could it be” that mailed the anonymous envelope – or why. Who benefits? In the middle of an election. Those answers truly matter.

Let’s also see this for what it is – a local lawsuit. Stop trying to turn this into “New York Times vs. Sullivan” – it’s not. The article is written – winners get to gloat – to effusively praise the legal defense. I would too.

I guess the only issue left to speculation is this: when Nancy receives another “anonymous” envelope with insider dirt on a Norwalk candidate running this fall – will she print it, again?

Are these the new rules of engagement?

@Mike Mushak – just wondering what the Republican Party has to do with this lawsuit? And Trump? I dont get the connection. Keep stretching?

This outcome is a victory for the First Amendment and a free press! Congratulations to Nancy for having the courage to report the story and to the Yale Law School Media Clinic for its legal skill in successfully defending her!

Just curious – why is it that if, say, Mike Barbis or I criticize public officials, it’s always presented on this site as a crime against humanity, but when Nancy does it its a glorious affirmation of the First Amendment?

Dropped minutes before a judge was about to possibly impose fees for frivolous litigation …hmmm .. sad

Mushak gonna be crying again in 2020.

So this is what happens when you hire an attorney who has been suspended twice by the CT Bar since 2016? People really need to research an attorney before hiring them.

Congratulations on being vindicated, Nancy!

The first line of the D’Amelio story was “Republican State Senate candidate Marc D’Amelio says a 2014 arrest has been removed from his legal record and is only surfacing now because of political opponents.”

In general, documented and credible evidence of illegalities on the part of someone holding or seeking a public trust is news, and I expect it would be the subject of a story. Sending an anonymous letter with a bunch of allegations, without any evidence or specific guidance to readily obtainable evidence, more often than not will not result in a story.

This I can guarantee: anyone looking to this site for news that always confirms his or her point of view is certain to be disappointed.

How did this information make it to the press in the first place? It was supposed to be sealed after completion of rehabilitation. It can happen to you. Put your self in that position. Maybe you are applying for a job. Then…Boom… something from your past you paid a debt for is released to the paper. Now that job is gone. That wasn’t what you agreed to… Was it? If you knew that could happen would you agree to the deal in the first place? Probably not.

This is a breach of trust and someone should be held accountable. Maybe it isn’t NoN, but certainly someone did something wrong and we should know it will not happen again.

i commented twice previously about this topic but was denied print space both times because they deemed it hearsay. I think the fact that the police department wasnt penalized in anyway is a shame here. The chief simply said it was a mistake. Thats not acceptable since mistakes in police work can cost a life. I dont blame Nancy for printing what was public but there was no need to diminish someones character who paid their price to society. Just my two cents.

@Tysen – people often wonder why there’s a distrust of the media and the police? Your comment touches on both. You nailed it

Good luck Nancy. You will now be the target of every mental runt in this city. H.L. Mencken would have a field day in this atmosphere. Most citizens are like the walking dead or as Eric Hoffer wrote” They are the True Believers “.

i think Nancy should investigate and publish what really happened that this info became public. Does the chief have an updated comment?